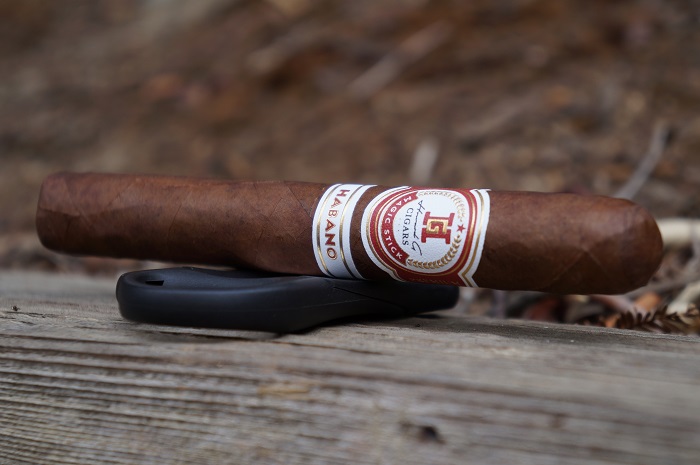 Aaron: The wrapper on the Howard G Magic Stick Habano Toro is a marbled light brown and has a couple of medium sized raised veins along with a network of fine veins. The seams are slightly raised and the caps are decently applied. There are two bands, both carrying a color combination of white, burgundy and gold. The primary denotes the brand and line while the secondary denotes the sub-line. The aroma from the wrapper is quite light and brings musty wood while the foot has a fuller musty wood along with light tobacco sweetness and spice. The pre-light draw brings a very musty and airy cedar along with a mild spiciness on my lips.
Seth: The Howard G Magic Stick Habano Toro is a beautiful cigar in hand. Great coloring. Dark red Colorado. Firm in hand with aromas of chocolate, rich earth, sweet spices and raisins. Small to medium sized veins present throughout. Nice cold draw.
John: The Howard G Magic Stick Habano Toro comes in cellophane, and has a UPC sticker attached at the high part of the cellophane to avoid tearing when it is opened. The cigar is double banded, with ‘Habano’ as the secondary band. For aromas, I could pick up on medium strength sweet barnyard, mild hay and wood. From the foot, there was mild, sweet tobacco, along with dry wood.
Jiunn: The Howard G Magic Stick Habano Toro has an even Colorado Maduro wrapper shade. Veins are well pressed, seams tight, bunch and roll even and head well wrapped. Aromas from the wrapper tell of sweet, roasted nuts. Aromas from the foot tell the same but with a layer of dry red peppers. Cold draw reveals paint thinner, celery seeds and white pepper spice. 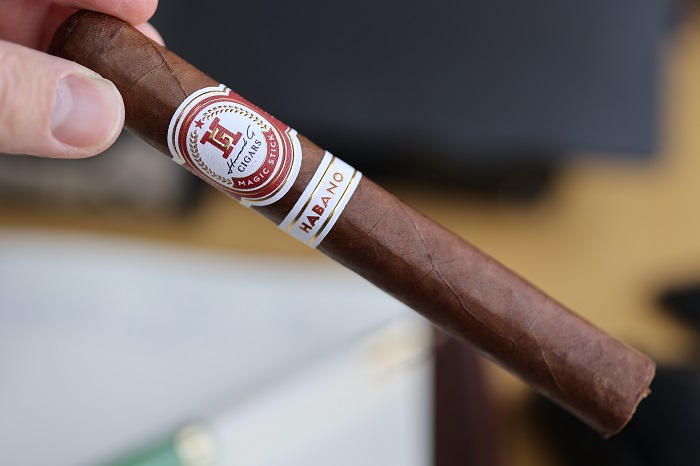 Aaron: The cigar begins with musty, toasted wood and baking spice. The retrohale brings toasted wood. At an inch in, the baking spice transitions to black pepper which sits behind the musty, toasted wood and has a long finish. At an inch and a half in, the wood takes on a slightly stale note. As the third comes to a close, the profile is musty, toasted, slightly stale wood and mild black pepper. The strength is mild-medium.
Seth: The first third starts out with nice red pepper spices that are paired with oak, leather and dry earth qualities. I am picking up coffee bean qualities on the finish, and it very pronounced. Quite lovely. Medium-full in strength and body.
John: The first third kicks things off with a combination of bread, baking spices and sweet wood to finish. There is a delayed spice kick along with some wood on the post draw. As the first third settles in, wood is leading the profile. As the cigar progresses, lingering light-plus pepper sits on my tongue tip between draws. Some time later, hay comes through to finish the draw. By the halfway point, there is some chocolate, adding complexity.
Jiunn: The first third’s highlight isn’t so much about the flavors, but rather the mouthfeel. The mouthfeel is incredibly buttery, almost having a layer of oil and semi-full tannins covering the entire palate. Flavor-wise, there isn’t much there, as it’s mainly cream, cedar and baking spices. Retrohaling, as expected, amplifies the flavors, showing dry red pepper spice, cedar and cream. The finish is incredibly long with butter, cream and subtle charred dry red peppers. Strength and body is medium-full. 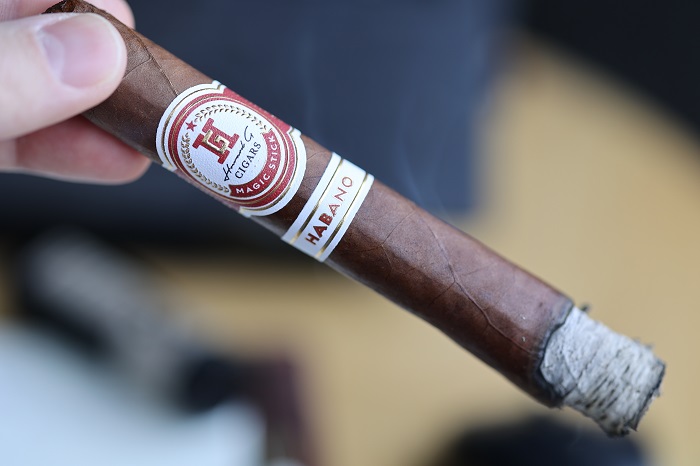 Aaron: As the second third begins, the black pepper picks up a little bit and the wood note becomes more defined as cedar and only has a light staleness to it while the mustiness and toastiness remain. The retrohale is now musty, toasted cedar. At an inch and a half in, some dry earth joins the profile. The strength in this third bumped up to slightly below medium.
Seth: The second third delivers a flavor profile that is of toast and coffee. I am picking up some earth and wood notes as well, and there is a finish of soft pepper spice. In terms of strength and body, I would classify the cigar as medium-full.
John: The first few puffs here are chocolate, hay, wood and mild baking spices with wood to finish. That finish gives way to lingering hay between each draw. Hay moves to the front of the profile, driving the primary flavors as the cigar progresses. By the bottom half, the baking spices return to the retrohale at medium strength.
Jiunn: Second third still shows an abundant buttery mouthfeel. In terms of flavors, the profile picks up more spice and earth in the form of baking spices and toasted cedar. Strength and body is now medium. 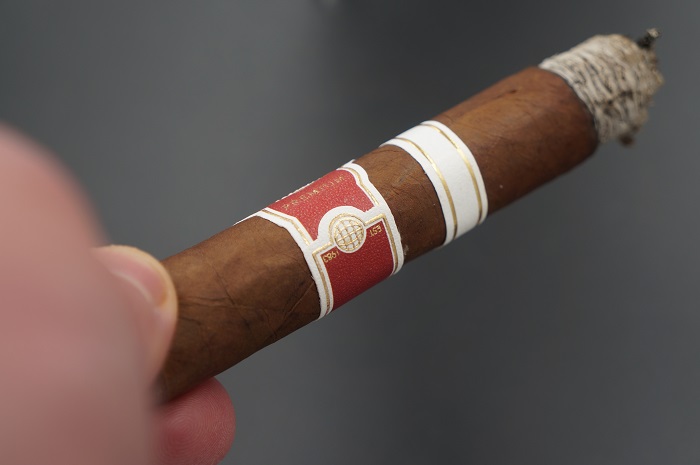 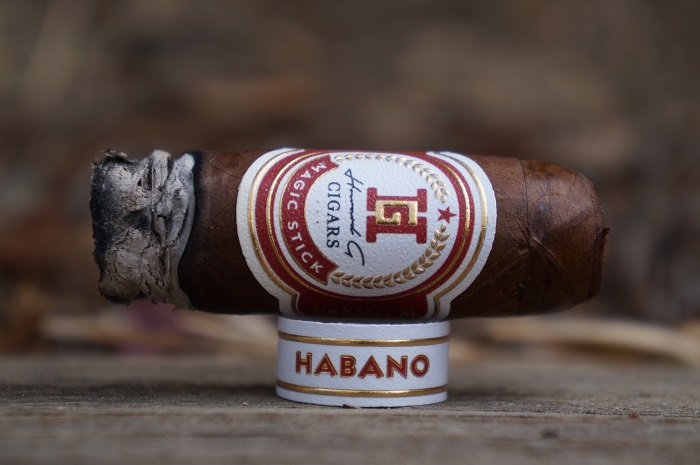 Aaron: The burn line was straight throughout, but the cigar did go out once, requiring a re-light. The ash held on in inch and a half increments.
Seth: Great burn throughout.
John: The burn was straight to start, with a split developing in the wrapper as the first third progressed. The burn was uneven moving into the second third, eventually forming a canoe that needed a single touch-up.
Jiunn: Fantastic burn performance. Even burn, tight ashes, cool burning temperature and solid smoke production. 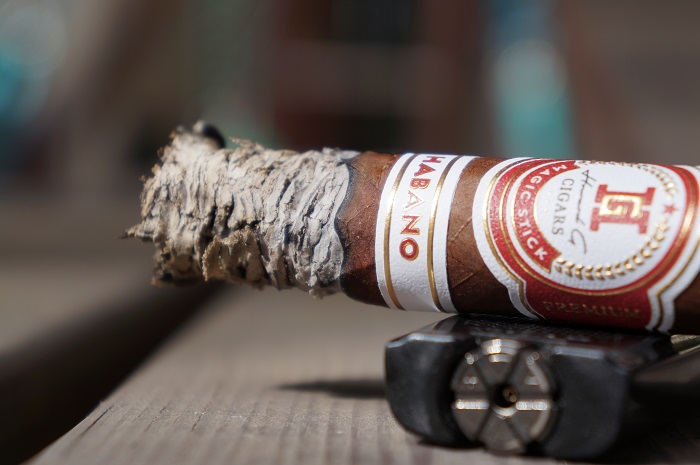 Aaron: The cigar had a flavor profile focused around musty, toasted wood, later becoming defined as cedar, dry earth and black pepper. Construction was great, aside from one re-light. The Howard G Magic Stick Habano Toro presented a fairly average flavor profile with very little transitioning. It’s an approachable flavor profile with a lower strength level, so something that anyone can easily smoke. The price point is a bit high and likely not something I’d return to. It was nice smoking another new brand, and I’d be interested in trying one of their limited edition offerings as a next step.
Seth: This was a nice solid blend. I loved how the Howard G Magic Stick Habano Toro started but was disappointed where it went in the second and final third. It lost just a touch, but it made a huge difference on the cigar. The dry oak, leather and earth flavors really paired well with the spiciness and pepper. Solid body and strength with good construction.
John: The Howard G Magic Stick Habano Toro started out with an interesting medley of flavors, and was pleasant through the second and last thirds, but didn’t manage to maintain the level of complexity delivered in the first third. This cigar would appeal to cigar smokers who enjoy Habano wrappers, but don’t want a blend that’s overly pepper or spice forward. Draw was perfect, and the burn was near perfect with just a single touch-up required. I’ll be interested in trying out other offerings from Howard G as we get our hands on them. Total smoking time was a respectable 1 hour and 49 minutes.
Jiunn: I think the Howard G Magic Stick Habano Toro has one key thing nailed down, but falls short of having a cohesive flavor offering. While I loved the silky, buttery mouthfeel of the cigar, the flavors were not up to par. I need more than the softer tones of cream, cedar and baking spices. More richness in spice and sweetness off the cream would have upped the overall experience to a solid “good.” This is a nice first showing from this brand and I’ll be interested to review more from their portfolio.