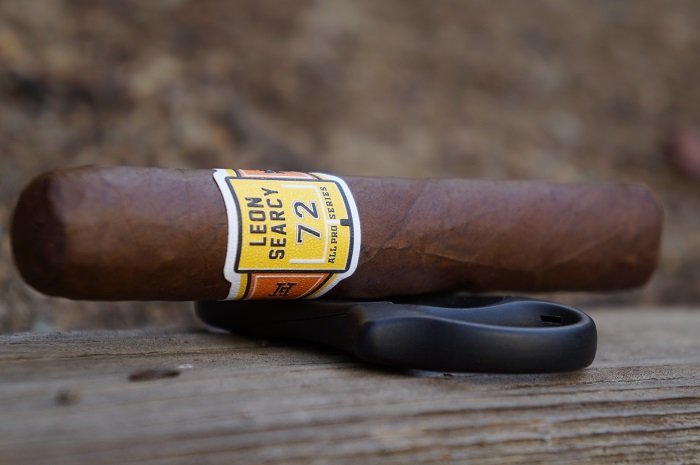 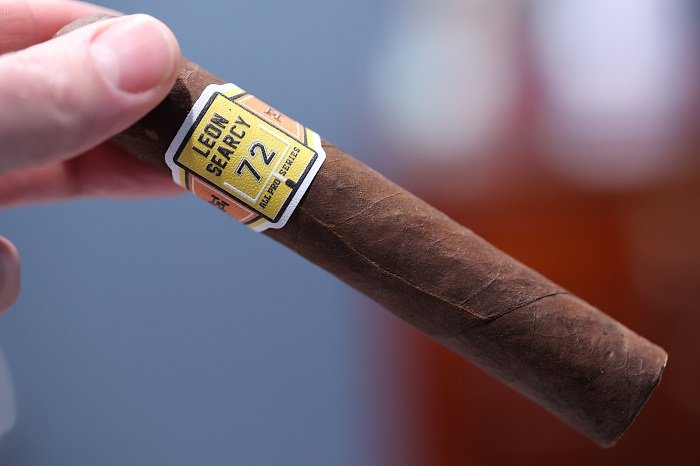 Aaron: The cigar opens up with lightly toasted cedar and earth. At a half inch in, a light creamy coffee joins the profile. The retrohale is a mix of toasted cedar and earth. As the third comes to a close, the toasted cedar is just ahead of the earth with a bit of creamy coffee in the background. The strength was slightly below medium.
Seth: I love the first third. Sweet spices present with some sweet cedar, herbs, lemongrass and dry earth. Some tobacco notes present as well with a finish of dark chocolate. Not too sweet on the chocolate. Medium in strength and body.
John: My first few puffs are flavors of sweet earth, tobacco, with earth and spices combining into the post draw as a delayed wood is also present. A medium-full strength red pepper flake develops on the post draw after a few puffs. A rich tobacco sweetness defines the center of the profile as the first third settles. Creaminess is present through the retrohale as the red pepper flake recedes in intensity down to medium-minus. Moving towards the halfway point, some floral notes are on the finish at light-plus. The floral note falls away to a background note and is replaced with a nuttiness.
Jiunn: The first third has a nice semi-gritty depth to the entire profile. Dirt earthiness, spicy cedar and musty barnyard. Retrohaling gives intensified spicy cedar and creamed cherry soft candy. The finish is long, with the same dirt earthiness. Strength is medium-full and body is medium. 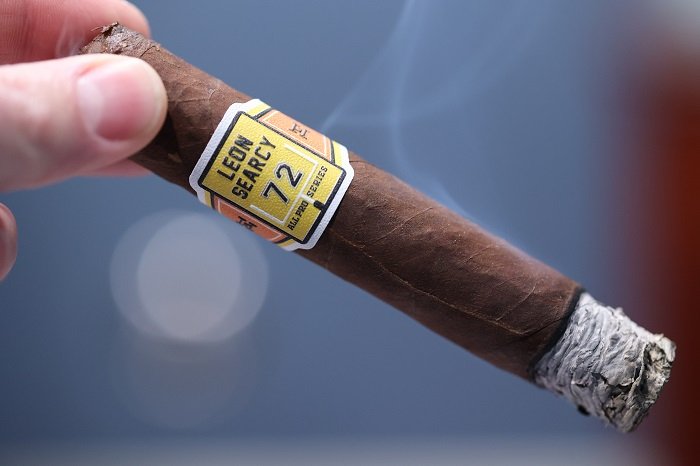 Aaron: As the second third begins, the earth is now even with the toasted cedar up front. The retrohale is now toasted cedar and earth along with a bit of the creamy coffee. As the third wraps up, the toasted cedar and earth remain even up front with light creamy coffee and now some black pepper in the background. The strength remained at slightly below medium.
Seth: The second third delivers a lemongrass, herbs and hay quality. Some cedar present as well with spices. Finish of coffee and dark chocolate. Again, not too sweet. Not as sweet as the first third. Medium in strength and body.
John: The second third gets going with creamy tobacco and wood, as spices and wood combine to finish. The spices immediately take over the post draw. As the second third continues, the spices move forward to take the front of the profile. A cinnamon settles into the center as the cigar reaches the halfway point. In the bottom half, chocolate comes through at the end of the draw.
Jiunn: The second third has narrowed down to primarily dirt earthiness with trailing spicy cedar that’s more evident on the finish. Strength and body remains medium-full and medium, respectively. 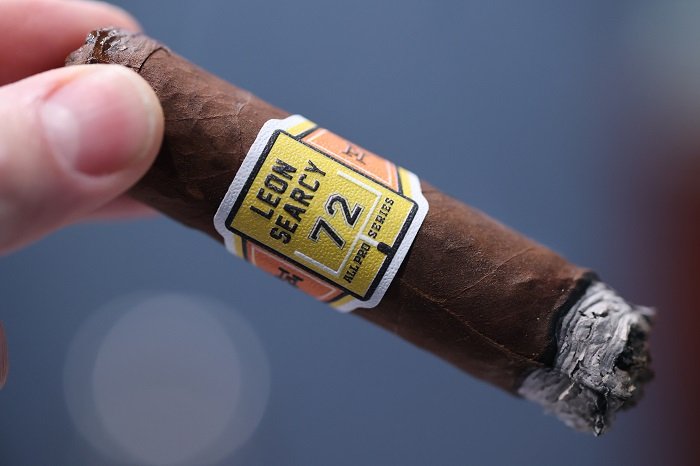 Aaron: As the final third begins, some wood bitterness joins in to the middle of the profile. At a half inch in, the toast level picks up a fair amount and the creamy coffee note has departed. The retrohale is now heavily toasted cedar, with earth and light wood bitterness. At an inch and a quarter, a bright, pine note joins the profile. As the cigar wraps up, the heavily toasted cedar is now ahead of the earth with wood bitterness and bright pine note in the middle of the profile. The strength bumped up to medium.
Seth: The final third delivers those lemongrass, coffee, dark chocolate, herbs, cedar and hay qualities. Again, medium in strength and body.
John: The last third is initially defined by creamy spices, finishing with wood, spices and earth accents into the post draw. I find the profile transitions to wood and hay forward as it gets settled in. Some mild coffee notes on the retrohale after the re-light, roughly halfway through the final third.
Jiunn: By the final third, the profile’s grit is turned full volume, creating a very “dirty” mouth feel. The finish in that sense seems everlasting, which isn’t necessarily a good thing. Strength and body finishes the same. 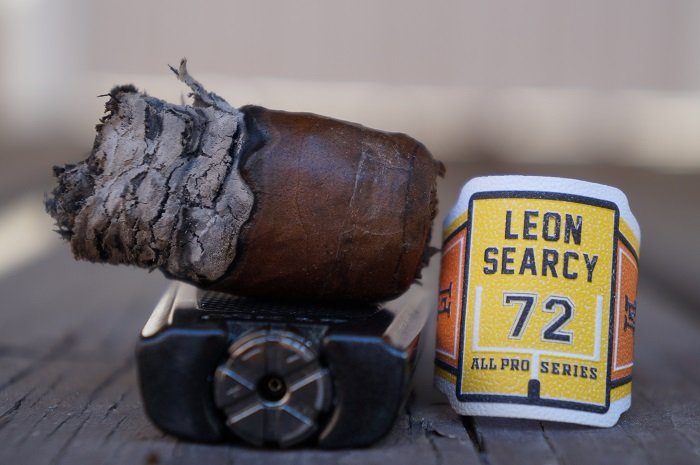 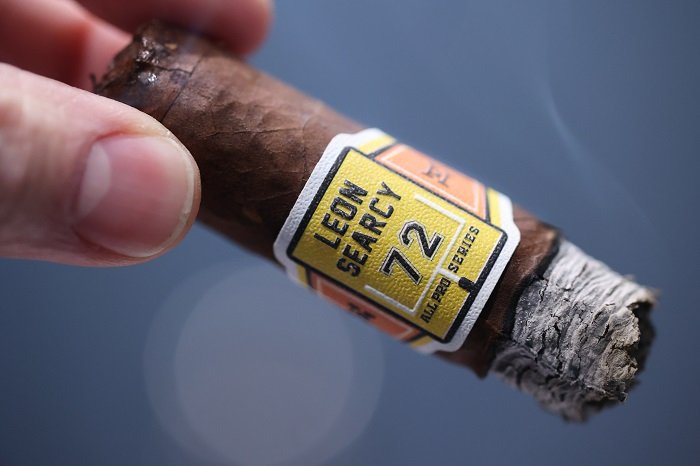 Aaron: The cigar began with lightly toasted cedar and earth. Some light, creamy coffee joined in a bit later. The final third saw some wood bitterness and a bright, pine note join in while the creamy coffee had departed. The cigar was constructed poorly, possibly being underfilled or poor leaf placement as the draw was open and the cigar went out four times. The Howard G All Pro Series Leon Searcy Lil Searc flavor profile was average for the first two thirds and then dropped a level in the final third as the construction issues finally took their toll. I can’t imagine the flavor profile is what would be present from this cigar if it was properly constructed and I’ll be interested to see what experience the others have. Other than coming back to see how a well constructed version performs, I’m not sure it’s something I’d want to revisit.
Seth: I didn’t know who Leon Searcy was when I first lit up this cigar. I didn’t look at the band, so I figured Aaron was making us smoke some baseball player’s cigar. I then realized the goal posts after looking at the cigar. Well, I know who Leon Searcy is now! I gotta get myself a Searcy jersey from the U. (Maybe Hector will like me again.) I loved the flavor profile on the Howard G All Pro Series Leon Searcy Lil Searc, body and strength, and how it smoked from beginning to end. Smooth cigar with nice flavors. Core flavors throughout with some transitioning and subtle changes in complexity. Good construction. Tuna approved!
John: The Howard G All Pro Series Leon Searcy Lil Searc was a good review experience, with a flavor profile that had a lot of evolution throughout, both from a flavor component and intensity perspective. The draw was perfect and the burn suffered somewhat with a re-light in the last third. I would happily smoke one of the Howard G All Pro Series Leon Searcy Lil Searc again. Total smoking time was 2 hours and 9 minutes.
Jiunn: There’s a gritty dirt/soil earthiness that I love in certain Nicaraguan tobaccos. I sometimes view it as a trademark of Nica cigars. But that style of earthiness needs to be accented and blended well into the other leaves. That’s where I feel the Howard G All Pro Series Leon Searcy Lil Searc fell short. It became too much earth, leaving my palate caked with dirt/soil earthiness. Good attempt, but this is ultimately a pass.