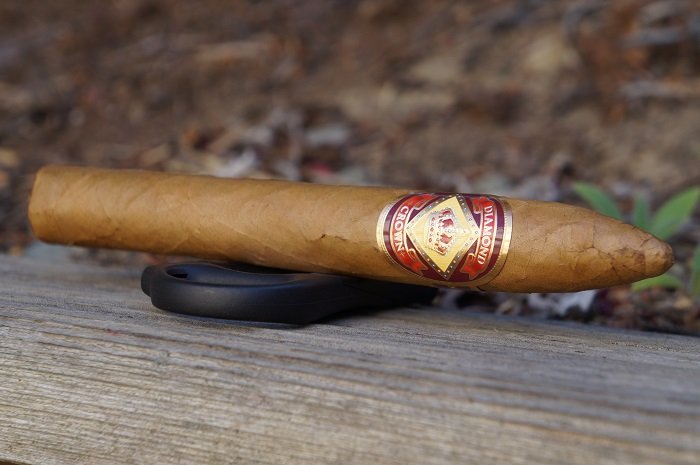 Aaron: The Diamond Crown Pyramid No. 7 is pretty rustic looking as the wrapper is medium tan with some raised and knotty veins, lumpiness and wrinkles. The seams are raised a fair amount while the tapered head is well finished. The band is the traditional brand design with a color combination of burgundy, yellow, red and gold. The aroma from the wrapper is musty hay while the foot brings sweet hay and bread. The pre-light draw is musty and lightly sweet hay along with a mild spiciness on my lips.
Seth: The Diamond Crown Pyramid No. 7 has a nice firmness throughout, but the wrapper itself appears to be loose in some places. It is silky and dry in texture and sports veins that are small. It has a reddish Natural coloring, and there is this combination of light clay and sand coloring to the cigar. The foot is that of tobacco and earth, while the wrapper gives off leather and pepper qualities.
John: The Diamond Crown Pyramid No. 7 is cellophaned, but does not have a UPC sticker on it. The wrapper has a pleasant smooth appearance and is tan in color. Aromas form the cigar were aged tobacco, wood and hay, with mild sweetness barely perceptible underneath. Hints of earth and mild hay were present in the foot.
Jiunn: The Diamond Crown Pyramid No. 7 has a light mustard claro wrapper shade. Veins are well pressed, seams tight, bunch and roll even and tapered head is well wrapped. Aromas from the wrapper give hay and dried nuts. Aromas from the foot give sawdust, white pepper and cedar. Cold draw provides sawdust, airy cedar and dried nuts. 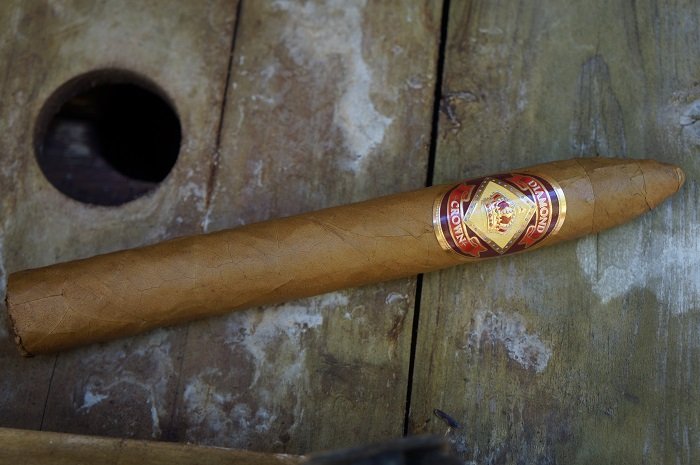 Aaron: The cigar begins with aged oak up front, creaminess in the middle and mellow cinnamon in the background. At a half inch in, the aged oak carries a bit of dryness while the creaminess and cinnamon are mingling a bit. At an inch in, all of the components are now intertwined. The retrohale consists of musty, toasted oak. At an inch and three quarters, some mustiness attaches itself to the aged, dry oak. As the third comes to a close, the musty, dry, aged oak is the core of the profile with the creamy cinnamon now fairly light in the background. The strength in this third was slightly below medium.
Seth: The first third opens by delivering some white pepper and cream notes. There are cedar and coffee bean qualities present as well, but it is focused on pepper and cream. Faint earth notes are present on the finish, and I would classify the cigar as mild to medium in strength and body.
John: The first third opens with light chocolate, dry hay, and wood to finish. Sweet cream moves into the retrohale after the first puff. A sweet bready note is present in the retrohale approaching the halfway point. Although I haven’t used many flavor descriptors by this point, the cigar is quite enjoyable. The flavors come together for a creme brulee type dessert experience.
Jiunn: The first third provides ample natural sweetness and creaminess from bread and dried nuts. There’s also some nice cedar in the mix, especially on the finish. When retrohaling, everything elevates in general. Strength and body is medium. 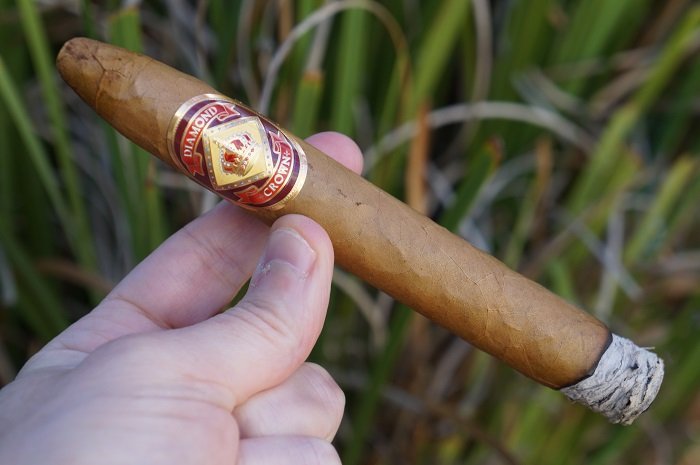 Aaron: The second third is a continuation of the first. At an inch in, the cinnamon has departed while the light creaminess remains. The retrohale remains musty, toasted oak. As the third comes to a close, the musty, aged oak is up front and not quite as dry while the light creaminess remains in the background. The strength in this third remained at slightly below medium.
Seth: The second third shows some growth as a cigar and while it is still focusing on the white pepper and cream notes, there is an emergence of some fruit notes. Hints of banana and nectarines. The cedar, coffee bean and earth qualities are present a well. Like before, mild to medium in strength and body.
John: Chocolate, creme brulee and light-plus baking spices take the review into the second third, with hay and wood to finish. That wood again takes on a bit of a drying aspect to it. A mild tannic quality accents the woody finish by the halfway point.
Jiunn: The second third adds a toasted bread to the already good mix of bread, dried nuts and cedar. Strength and body remains medium. 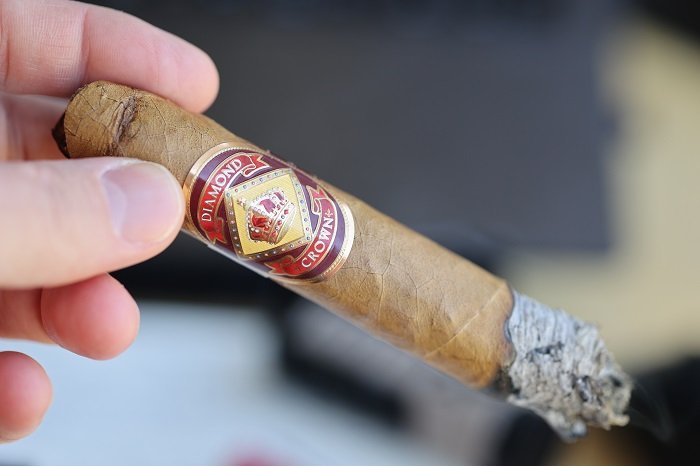 Aaron: As the final third begins, the oak gains a heavy toast. At an inch in, a light bitterness joins the profile while the creaminess has departed. The retrohale remains musty, toasted oak. The cigar wraps up with the musty and heavily toasted dry oak along with light bitterness. The strength in this third bumped up to medium.
Seth: The final third delivers a flavor profile of grass, hay, white pepper and cedar. There are some creamy notes, but not what they were in the first two thirds. Step back from the second third. In terms of strength and body, somewhere between mild and medium.
John: Sweet baking spices, and a sharp wood finish greet me in the last third. There is still a lingering dry and mildly tannic wood on the post draw. As the last third settles in, the profile becomes wood forward for the remainder of the review.
Jiunn: Towards the latter half of the final third, the profile gets a bit bitter and sharp. As such, dropping the flavor from being ‘good” to “average.” Strength and body is unchanged at medium. 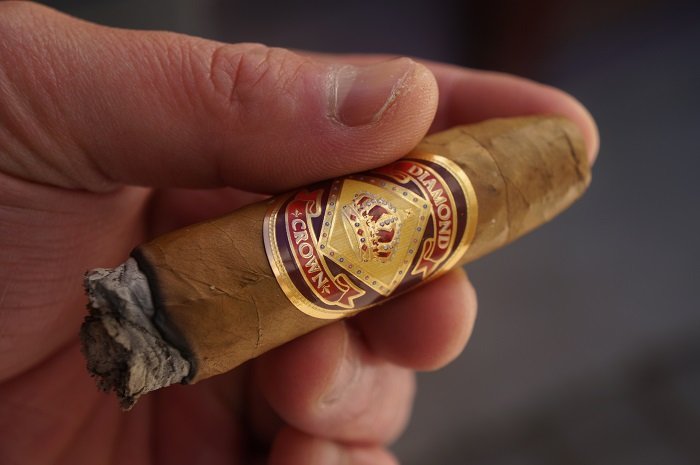 Aaron: The burn was wavy throughout, and for the entire cigar a quarter of the wrapper didn’t want to burn, which required two major touch-ups.
Seth: Solid burn throughout. Well-constructed cigar.
John: The burn started quite straight, with the ash holding on to almost 2 inches. The ash resisted being knocked with several attempts. The burn became uneven in the bottom of the first third, eventually requiring a touch-up.
Jiunn: Burn performance was flawless. Even burn, tight ashes, cool burning temperature and ample smoke production. 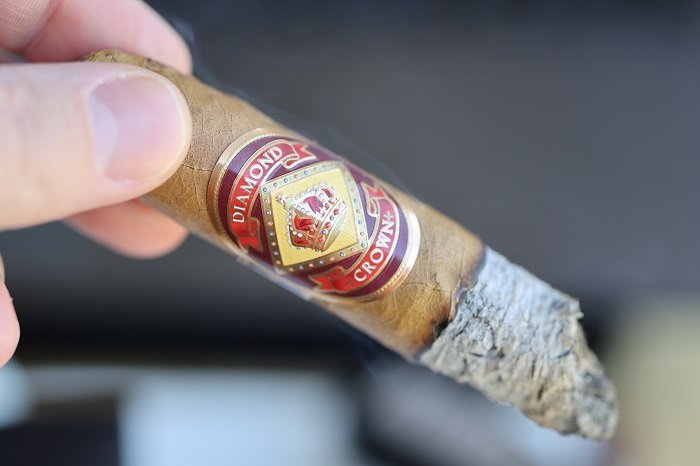 Aaron: The cigar had a really nice flavor profile, but the dryness of the oak was a bit of a detractor. If the dryness wasn’t there, the rating for the first two thirds would have each been up a level. The burn issues were a bit of a bummer, but weren’t much of an influence on the flavor profile. The price point on this cigar is quite high and if the cigar could dodge the dryness, I would say it wouldn’t be that big of a deal because the cigar would have been really good. I would smoke the Diamond Crown Pyramid No. 7 again, but the price point, and the dryness would make me think a bit harder about picking another one up.
Seth: I know Diamond Crown was once considered a premium Connecticut offering, but the industry has come a long way in producing superior Connecticut offerings for a fraction of the price. If people are still buying these and smoking these, stop. Aaron, what are we doing? J.C. Newman produces some great cigars. The Diamond Crown Pyramid No. 7 is not one of them.
John: The Diamond Crown Pyramid No. 7 was one of the better Connecticut Shade cigars that I’ve smoked in some time. Although I wish the last third packed as much complexity as the first two thirds, I was engaged and enjoying the flavor profile almost the entire time. The draw was perfect, and the burn required a single touch-up to correct. Although the price point is reflective of the growing cost of authentic Connecticut Shade wrapper tobacco, this was one I would return to if I had the opportunity. Total smoking time was a bit on the quick side at 1 hour and 38 minutes.
Jiunn: It’s been so long since I’ve had this cigar that I have no recollection of the taste. I just remember it being expensive. I apparently have been missing out this entire time as the Diamond Crown Pyramid No. 7 is what I enjoy out of a good Connecticut shade. Easy going with plenty of sweetness, creaminess and just the right amount of spice. I won’t wait this long to enjoy another one.