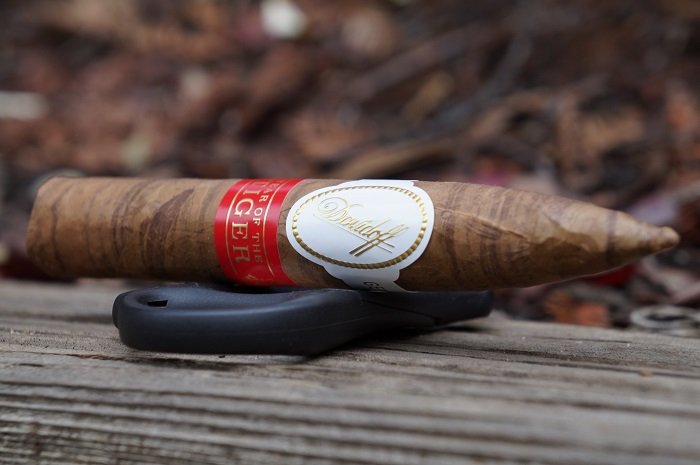 Aaron: The wrapper on the Davidoff Year of the Tiger Limited Edition 2022 is a mix of light and medium brown as a unique process was used to make it appear as if the wrapper had stripes. There are a few decently raised veins present while the seams are very smooth and the sharply tapered head is finished very well. There are two bands, with the primary being the traditional white and gold design. The secondary band is red and gold and denotes the line name with vertical stripes on the back. The aroma from the wrapper is very musty wood and light hay while the foot brings less musty wood and bread. The pre-light draw brings musty cedar.
Seth: The presentation of the Davidoff Year of the Tiger Limited Edition 2022 is amazing. It is nearly impossible to beat. Finished with striping like a tiger, the cigar has a base coloring of light Natural/Colorado with stripes of dark Natural. Veins are small throughout and the cigar is silky to touch. Firm from foot to tapered head, the cigar sports an aroma of cocoa, cedar, earth, raisins and spices.
John: As is often the case with Davidoff Limited Edition releases, they pulled out all the stops for the Davidoff Year of the Tiger Limited Edition 2022. The cigar is cellophaned, and has a UPC sticker with an integrated tear point to leave the UPC intact when opened. The cigar is double handed, with a ‘Year of the Tiger’ as a red, secondary band. I’m assuming the choice of red for the band is an intentional tie in for the Chinese tradition of lucky red envelopes during Chinese New Year. For an additional complication the cigar has a tiger stripe pattern throughout the wrapper, which is quite impressive. Aromas from the wrapper included bread, a fresh, sharp cedar and mild, faint hay. From the foot, most of what I could detect was hay.
Jiunn: I must say, the wrapper art, it’s grrrrrrrrreat! The Davidoff Year of the Tiger Limited Edition 2022 has veins that are well pressed, seams tight, bunch and roll even and aggressive torpedo head is well wrapped. Aromas from the wrapper tell abundant hay and airy cedar. Aromas from the foot give a similar vibe but with added dry red pepper. Cold draw reveal softness in roasted nuts and cedar. 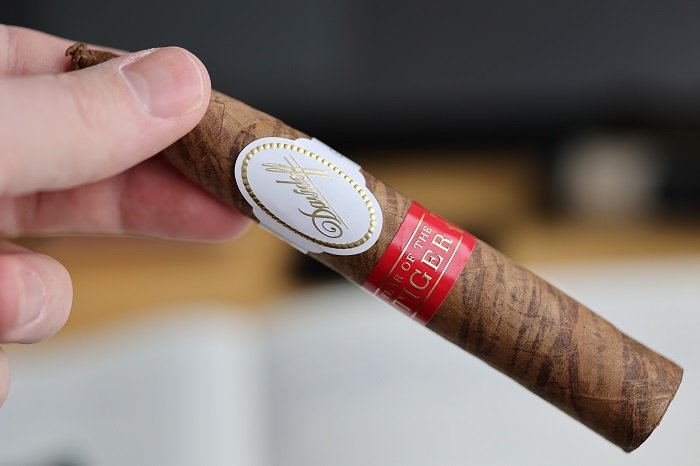 Aaron: The cigar begins with musty, toasted cedar and mild baking spice. At a half inch in, the baking spice transitions to a mild black pepper. The retrohale is musty, lightly toasted cedar. At an inch in, a light earthiness joins the profile. As the third wraps up, the profile is musty, toasted cedar up front with earth and black pepper in the background. The strength was at slightly below medium.
Seth: The first third begins with some dark cocoa notes that are paired with toast and cedar qualities. There are some cream and coffee qualities as well, and the finish is that of leather. Medium in strength and body.
John: The first few puffs brought flavors of mild, sweet wood and baking spices. There is more of a mild earth and bread through the retrohale. Black tea develops not long after through the center of the profile. Some post draw pepper is present by the 5 minute mark. Chocolates and espresso start to work in under the earth on the retrohale. As the cigar progressed, earth settled on the post draw with some dry hay.
Jiunn: The first third starts off classic/original Davidoff style with lots of hay and grassiness upfront. What I dislike (and one of my biggest dislikes of Ecuadorian Connecticut shade) is the wood bitterness that hits as soon as the first draw. The bitterness is somewhat tapered by other notes, such as roasted nuts and cedar, but it’s especially long and lingering on the finish. The only time I don’t get it is when I’m retrohaling. The retrohale is actually the best part, giving intensified cedar, hay and cherries. Strength and body is medium. 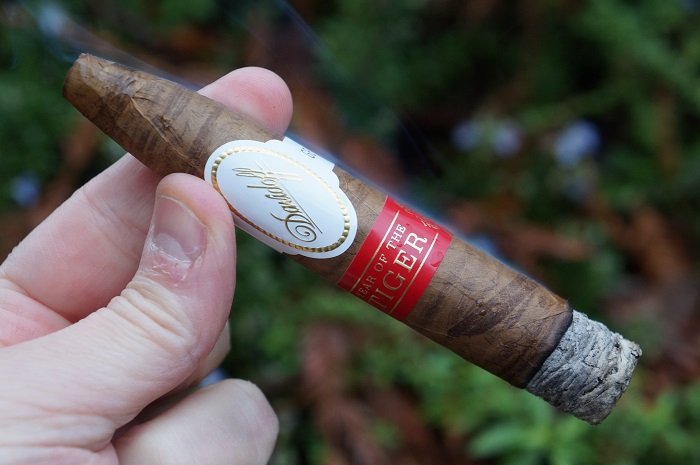 Aaron: As the second third begins, the black pepper picks up a bit. At a quarter inch in, the toast level increases as the mustiness decreases. The retrohale is now musty, toasted cedar along with some earth. At three quarters of an inch in, the toasted cedar has a light mustiness while the earth is a bit behind and the black pepper is in the background. As the third comes to a close, the earth is now even with the toasted cedar with light mustiness. The strength in this third remained at slightly below medium.
Seth: The second third delivers a flavor profile of musty barnyard, leather, cedar and soft spices. There are some faint cocoa qualities as well. Like the first third, medium in strength and body.
John: A mildly tannic cedar mixes with chocolate, as the chocolate and a lingering wood linger into the post draw. Some dryness and tannins develop on the post draw as the second third progressed. Black tea returned to the center, and brought with it some wood notes. By the halfway mark, chocolate has moved to the front of the profile. In the bottom half, mild walnuts are coming through the end of the draw.
Jiunn: The second third lessens the wood bitterness. But the overall vibe is quite mediocre, with ho hum notes of cedar, hay and some dry roasted nuts. Strength and body continues to be medium. 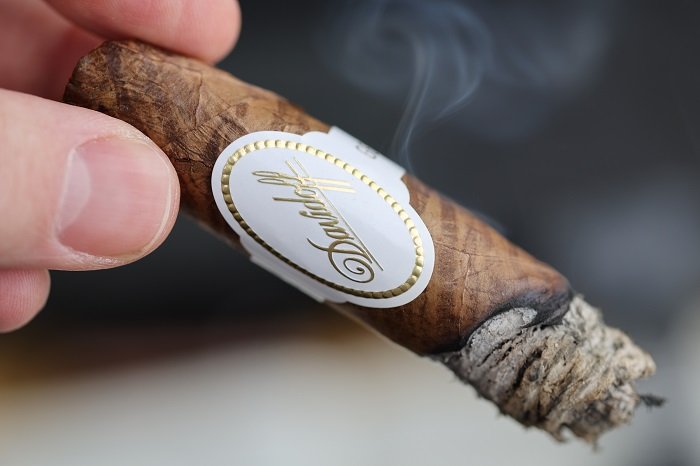 Aaron: The final third begins with the toast increasing a bit more and a light bitterness joining in. The retrohale remains musty, toasted cedar along with some earth. As the third wraps up, the mustiness picks back up and the musty, toasted cedar remains even with the earth and there’s still some black pepper and bitterness in the background. The strength remained at slightly below medium.
Seth: The final third delivered a flavor profile of cedar, musty barnyard qualities, hay, toast and leather. There were some nutty qualities on the finish, peanut flavors, but they were quite mild. Like before, medium in strength and body.
John: Walnuts, wood and mild hay carry the profile into the last third. The chocolate from the previous thirds is present in the middle of the cigar, but fading quickly. As it continued, it became hay forward.
Jiunn: The last third shows a noticeable dry leathery component. This, combined with the existing cedar, hay, dry roasted nuts, still is a bit lackluster. Strength and body finish the same medium. 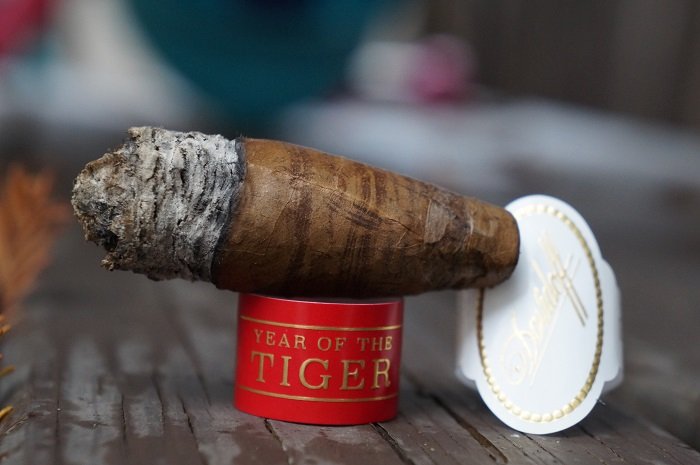 Aaron: The burn was perfect throughout and the ash held on in about inch and a half increments.
Seth: Amazing construction from start to finish.
John: I found the wrapper to be quite fragile. I had a wrapper tear at the cap after I cut it. The burn was wavy, straightening out at times. The ash was flaky, and held on in one inch increments. The cigar went out in the last third, requiring a re-light.
Jiunn: Fantastic burn performance. Even burn, solid ashes, cool burning temperature and good smoke production. 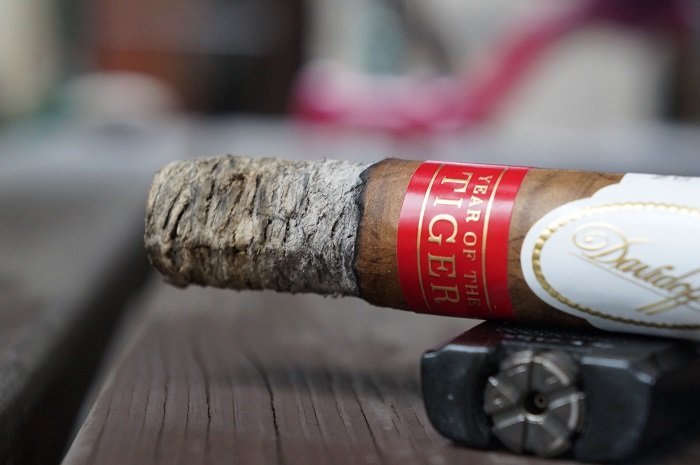 Aaron: The cigar began with musty, toasted cedar and baking spice, which quickly transitioned to black pepper. Some earth joined a bit later. The second third saw the toast increase and the mustiness decrease. The final third saw a light bitterness join in. Construction was great, allowing me to focus on the flavors. Overall, the Davidoff Year of the Tiger Limited Edition 2022 started well as the flavors were quite detailed. The second third saw the detail drop off and the mustiness waned and maintained an average profile through the last two thirds. I was really hoping the profile from the first third could have maintained itself longer as the detail and fullness was quite good. The price point is quite high and it’s hard for any cigar to live up to this price, even if the first third’s profile had kept up for the entire cigar. I enjoy trying these Year of releases, but it wouldn’t be something I’d come back to simply due to the price.
Seth: Possibly the most visually appealing of all the releases in the Davidoff Zodiac Series, the Davidoff Year of the Tiger Limited Edition 2022 is also one of the most lacking. I have felt the Zodiac Series has declined over the years, though there have been years where the annual release has performed well. This was not one of those years, and it is a great departure from the Snake in 2013. I also believe this to be a step down from the Ox in 2021 and Pig in 2019. Check out those reviews. The first third had some nice flavors, but there was not enough complexity and depth as I expect in the Zodiac Series. There was some transitioning from the first to the second third, but very little in the final third. Amazing construction, which had me somewhat surprised in the final third of the Torpedo, but that’s a good thing. The only reason I would say this cigar is worth the money is if you are wanting to collect the cigar because you have collected all other past releases in the Zodiac Series. Otherwise, hard to justify the cost.
John: The Davidoff Year of the Tiger Limited Edition 2022 was enjoyable, and the natural comparison here is to my experience with last year’s Ox release. I thought the Year of the Tiger had nuanced and balanced flavor components through the first and second third that kept my interest. The last third was average as most of that complexity fell off. Uncharacteristically, this cigar suffered from some burn and draw issues, which was the norm for many new cigar releases across the industry in 2021. The draw had some resistance to it, and the burn was wavy and required a re-light in the last half. I would happily smoke another Year of the Tiger Limited Edition 2022. Total smoking time was 1 hour and 38 minutes.
Jiunn: This is some very expensive art work on the Davidoff Year of the Tiger Limited Edition 2022. While the wrapper art is truly amazing, I only care about the smoking experience. Average is all she wrote. Wood bitterness and leathery dryness killed the flavor profile. Can we please go back to the great days of the Year of the Snake release? Lets make Year of the Rabbit a better one. Please.