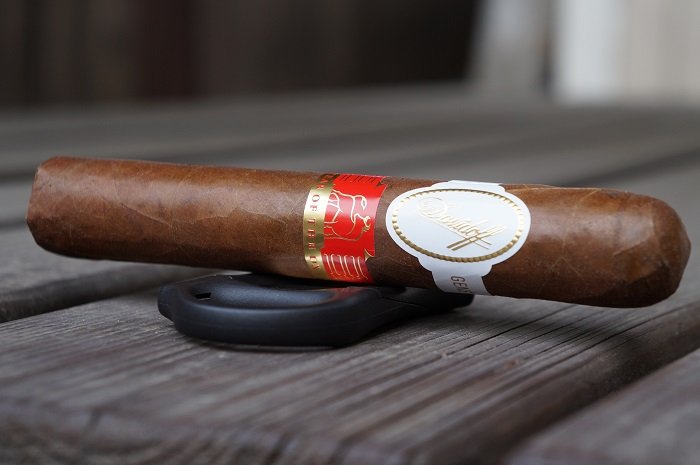 Aaron: The wrapper on the Davidoff Year of the Ox is between light and medium brown as the cigar is darker at the head and lighter at the foot and has some slightly raised veins that carry a lighter color to them. The seams are a bit raised and easily visible due to the color variation of the wrapper. The head is finished off with a well applied set of caps. There are two bands, with the primary being the traditional white label and the secondary being red and gold with a picture of an Ox and text of Year of the Ox. The aroma from the wrapper is cedar and hay while the foot brings wood, baking spice and tobacco sweetness. The pre-light draw brings a sweet and spicy cedar with a lot of depth and detail along with a mid-level spice on my lips.
Seth: True to it’s name, the Davidoff Year of the Ox is massive. For some reason it seems bigger than your standard 60 ring gauge. It sports a lovely Colorado wrapper that is marbled in coloring and with that are few veins. The cigar is firm and leathery in texture. The cigar has an aroma of raisin, tobacco, cedar and sweet earth.
John: The Davidoff Year of the Ox is double banded and has a UPC sticker on the cellophane designed with a tear tab that leaves the Davidoff name and UPC intact once opened. The cigar has a slight box press on the end. Aromas from the cigar included sweet honey, clover and graham cracker. From the foot, I was able to pick out sweet clover, hay and a light wood.
Jiunn: The Davidoff Year of the Ox, as expected, is a stout cigar. Even Colorado claro shade with veins well pressed, seams tight, bunch and roll even and head well wrapped. Aromas from the wrapper give plenty of hay and cedar. Aromas from the foot give sweet, roasted nuts and red pepper spice. Cold draw reveals cedar and hay. 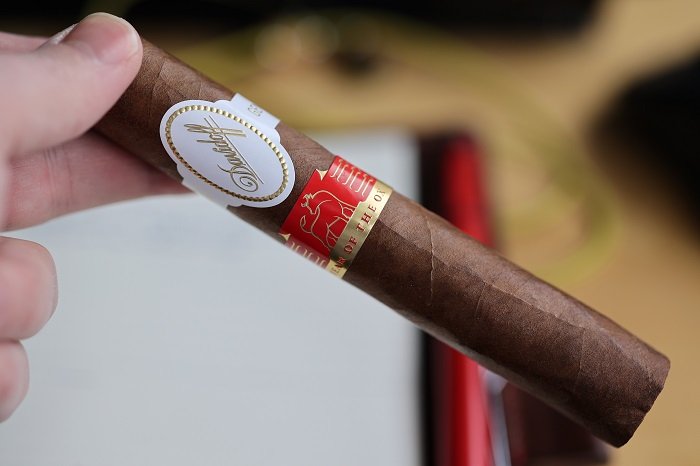 Aaron: The cigar begins with musty cedar and baking spice. At a quarter inch in, there’s a little mushroom in the mustiness. At three quarters of an inch in, the mushroom note has become fuller. The retrohale is musty cedar with a light mushroom influence. At an inch and a half in, the mushroom note has become very light and the musty cedar is becoming a bit less refined. The third wraps up with musty cedar with light mushroom influence and some baking spice in the background. The strength in this third was slightly below medium.
Seth: The first third begin by delivering some lovely spice notes that have touches of anise and cinnamon. There are hazelnut qualities present along with cream, cedar, hay and leather. It is lovely in terms of flavors delivered. Nice balance between sweetness and spice. In terms of strength and body, I would say the cigar is smoking around a medium level.
John: The first third greeted me with notes of clover, wood and a dry wood finish. Some post draw earth comes through after only a few puffs. Shortly after, a medium strength baking spice joins the retrohale. Once the first third has settled in, there is an addition of an herbal note through the retrohale. As the cigar progresses, mild chocolate starts to come through, along with a mild citrus similar to grapefruit. By the 20 minute mark, graham cracker is present.
Jiunn: To my surprise, first third doesn’t start with the typical Davidoff profile of hay, grass and mushroom funk. Instead, it’s subtleties in cedar, hay, nuts and baking spices. As a mater of fact, this flavor set is consistent throughout the entire first third. Retrohaling, as anticipated, amps up the flavors. Stronger doses of baking spices, cedar and nuts. The finish is incredibly short with just some cedar and baking spices on the rear palate. Strength and body is medium. 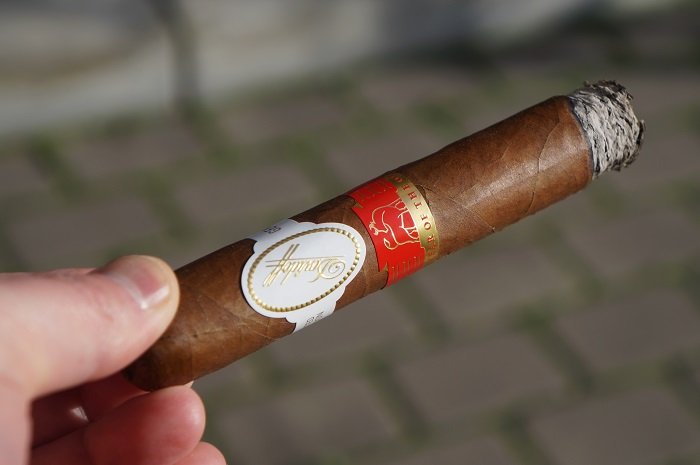 Aaron: The second third is a continuation of the profile from the first. At a half inch in, the cedar gains a light toast and the baking spice picks up a bit. The retrohale is toasted and musty cedar. As the third comes to a close, the toast note has become pretty heavy. The strength in this third bumped up to medium.
Seth: The second third delivers a flavor profile that is predominately delivering spice, mineral and wood notes. There are some honey qualities, but they are subtle. I am also picking up some burnt pine nuts. Like before, medium in strength and body.
John: Creamy, sweet baking spices take the Year of the Ox into the second third. An herbal note comes through on the retrohale, as baking spices settle into the post draw on the palate between each draw. Cedar comes to the front of the profile as the cigar settles in.
Jiunn: Not much has changed within the second third. It’s still showcasing the same cedar, hay, nuts and baking spices. At times, the baking spice is the front runner of the flavor set. Strength and body remains medium. 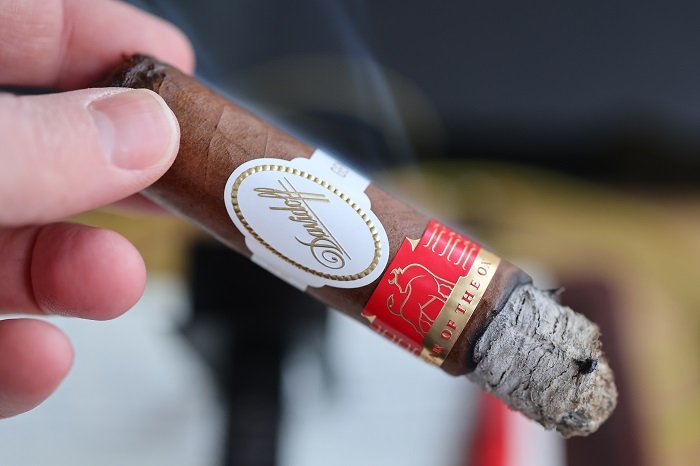 Aaron: As the final third begins, the toast note has transitioned to a light char. At a half inch in, the baking spice has been replaced by a light black pepper. The retrohale remains toasted and musty cedar. At an inch in, the char is pretty heavy. The cigar wraps up with heavily charred and musty cedar with light black pepper. The strength in this third remained at medium.
Seth: The final third shows some change in flavors and I am picking up some coffee and cream notes. It is paired with some soft spices, cedar and leather. There are some mineral qualities present as well, earthy, and it is smoking around a medium level in strength and body.
John: A baking spice and cedar combination lead into the last third. At the halfway point, some earth takes up the middle of the profile and the post draw. Baking spices return not long after.
Jiunn: For the final third, the cigar is still drumming to the same beat. Medium strength and body with flavors of baking spices, cedar, hay and nuts. The best part of it by far is the retrohale, as it gives more intensity to the same flavors. 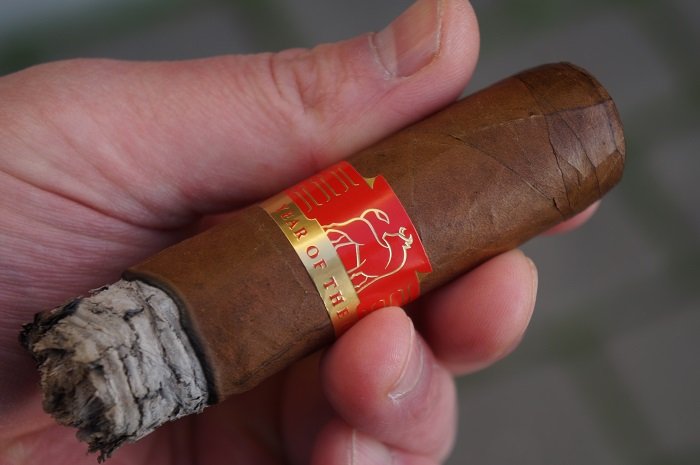 Aaron: The burn was a bit wavy, but never needed any attention. The ash held on in inch and three quarter increments.
Seth: Very good burn from beginning to end.
John: There is some waviness to the burn at points, with the ash falling off at 1-1/2 inch increments.
Jiunn: Burn performance was near perfect. Just a couple quick touch-ups to get the burn in line. 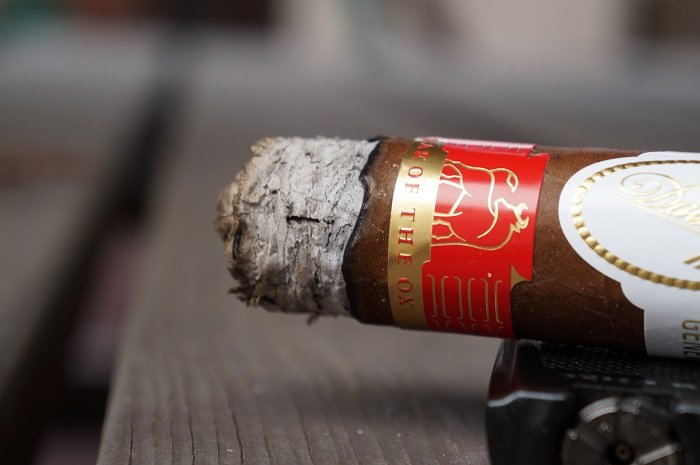 Aaron: The Davidoff Year of the Ox started with a fairly average representation of the typical Davidoff White Label profile of mushroom mustiness, cedar and baking spice. The cedar gained a toast note and finished with a heavily charred cedar in the final third. I was really hoping for more from this special release, but it never materialized. The price point is quite high and I don’t really see myself returning to this cigar.
Seth: I am trying to recall the last time I had a cigar that started out very good and then quickly went to average for the remaining two thirds. I have smoked a handful of these and found the same experience. It is unlike Davidoff for this to happen, and it is a shame. I found that on all the samples I smoked. If the Davidoff Year of the Ox smoked like it did in the first third throughout, it would have been amazing. One of the better zodiac releases in recent years, but still does not compare to some of the early smokes.
John: The Davidoff Year of the Ox presented the most interesting flavor experience through the second third, with creaminess, baking spices, herbal notes and cedar. Overall, I found the experience to be average, which is a disappointment given the limited nature of the Zodiac series, and this being my introductory cigar to said series. The burn was amazing, with a resistant draw that resulted in an average score. Given the price tag and limited availability, I would not seek these out again. It will not hold me back from trying a future years release. Total smoking time was a generous 2 hours and 47 minutes.
Jiunn: I found the Davidoff Year of the Ox to be average overall. It doesn’t have that Davidoff DNA of mushroom funk and grassiness that I’ve become accustomed to. Instead, the overall vibe is very subtle in flavors. Given that this Lunar New Year represents the ox, I would have expected the polar opposite of subtle. I would have anticipated a strong and bold blend, but with Davidoff finesse. This is definitely a pass for me, and especially disappointing for $40.