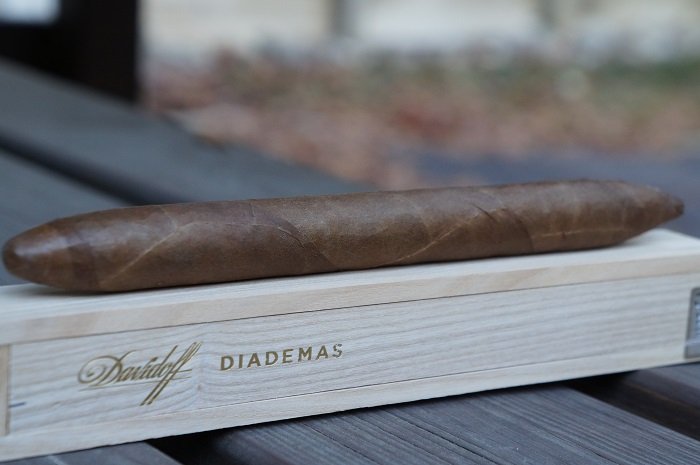 The wrapper on the Davidoff 100th Anniversary Diademas is medium brown and has some color variation where it is slightly darker towards the edges. There are a few prominent veins that are just slightly raised and they carry a slightly lighter color than the rest of the wrapper. The seams are easily visible due to the color variation of the wrapper and the fact that they are lifting in some areas. The head is well finished and is a 109 style while the foot is finished as a Perfecto with just the smallest of openings. There are no bands, but the cigar does come in a nice natural wood coffin. The aroma from the wrapper is just a light mix of wood and hay. With the foot being mostly closed, I don’t get anything different than from the rest of the wrapper. The pre-light draw brings a nice mix of leather and slightly green hay. There is also a mid-level spiciness present on my lips. 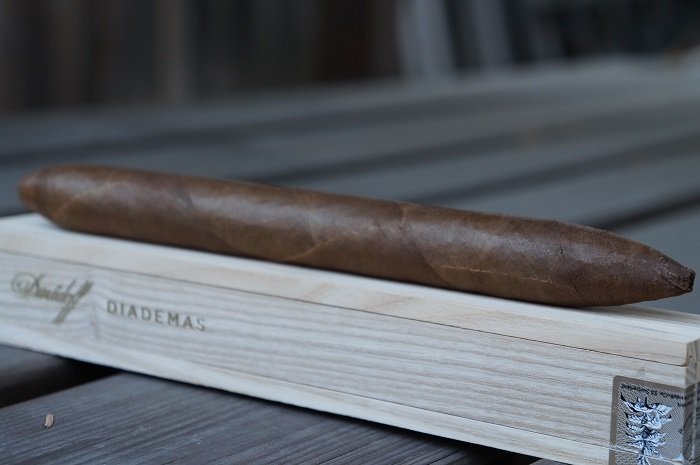 The Davidoff 100th Anniversary Diademas is silky in texture and has a nice firmness to it. The wrapper has a coloring that is what I would classify as being dark Natural and it has this faded brown coloring to it. There are scattered veins throughout and they are medium in size.There is an aroma of cedar, aged cabinetry, dry bread and light tobacco, and the cold draw is showing similar notes with some hay on top. 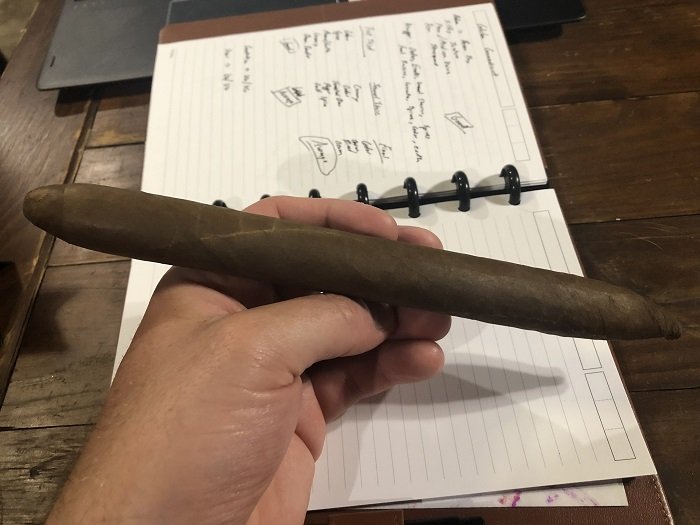 The Davidoff 100th Anniversary Diademas comes in a beautiful wooden coffin, with gold etched writing on the outside indicating ‘Davidoff Diademas’. Opening the coffin reveals the cigar, in cellophane, with a yellow ribbon to facilitate removing it. As per the writing, the cigar is a Diademas vitola, with a chocolate brown wrapper and flattened veins present throughout. There is no band on the cigar. Nosing the wrapper, I’m able to get cocoa, barnyard and faint cedar. 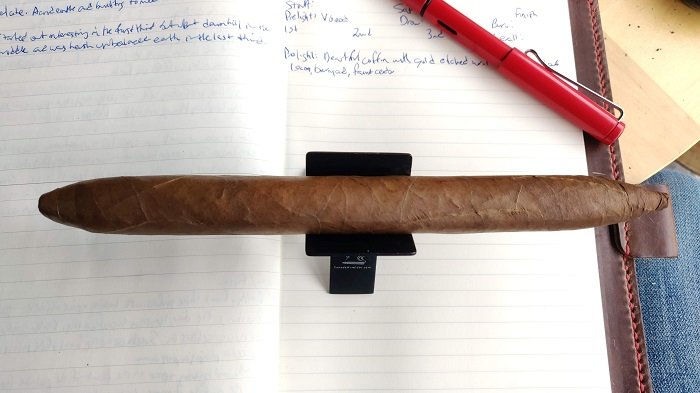 The Davidoff 100th Anniversary Diademas is a substantial yet elegant cigar, providing a natural espresso, Colorado Claro wrapper shade. The feel and look is great as veins are well pressed, seams tight, bunch and roll even and head finished off with a deep wrap around the cap. Aromas from the wrapper give kitchen baking spices and rich cedar. Cold draw gives dried persimmons, cedar and hay. 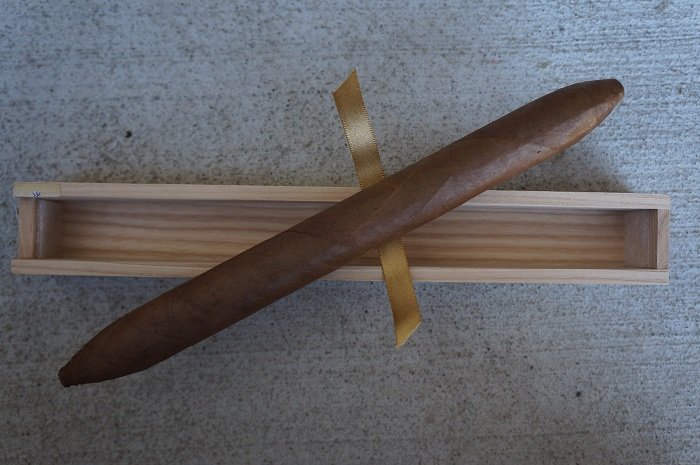 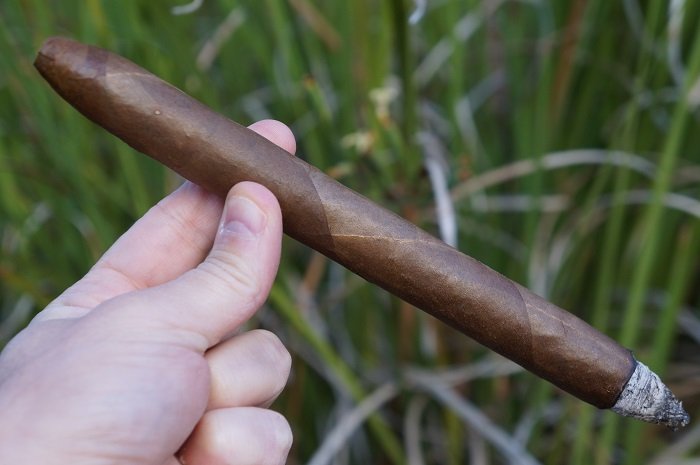 The first third opens by showing notes of honey, cedar, red pepper and oat bread. There is some hay as well, along with some salted caramel and almond qualities. It is incredibly complex and simply a beautiful smoking experience. It is a full flavored smoking experience with a medium body and a strength level between mild and medium. Marvelous first third. 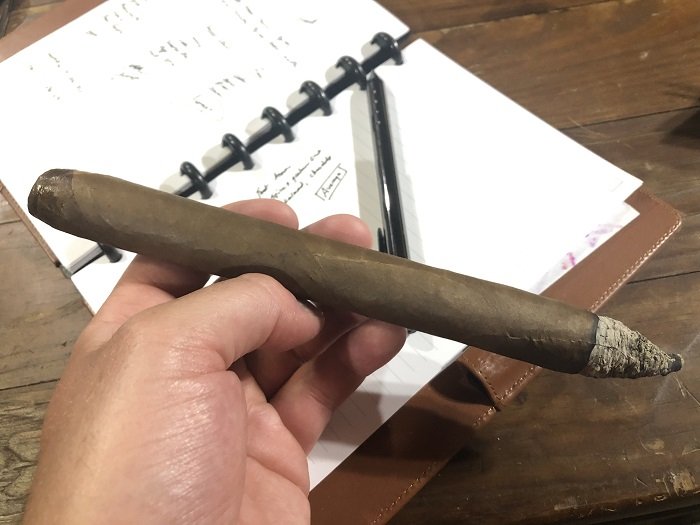 The initial draws produce sweet hay and cedar at the front of my tongue. On the retrohale is very light baking spices with a cedar finish at the back of my tongue. As the cigar progresses, the spices almost move to the tip of my tongue. Creaminess joins the retrohale as the cigar starts to settle in, bringing graham cracker with it. 15 minutes in, there’s some post draw drying aspect to the mouthfeel. By the 20 minute mark, the flavors begin to harmonize. Baking spices, cedar and cocoa sit on the middle of my tongue between draws. The graham cracker moves to make up the center of the retrohale. As the cigar begins the long transition to the second third, some bready notes come through. 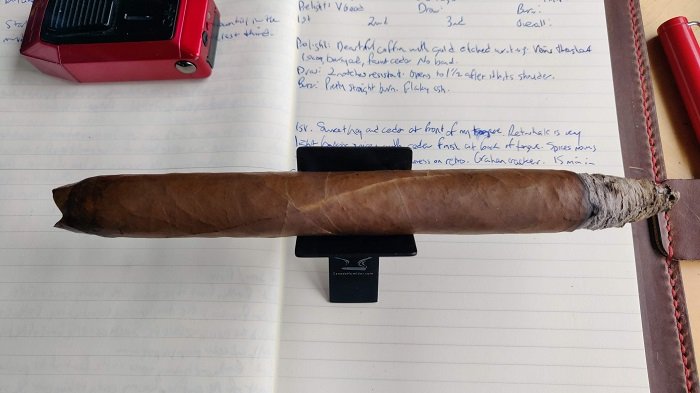 The first third creates a medium body and strength delivery of nuanced and soft flavors. Flavors of hay, cedar, nuts and a buttery component that does a great job of not drying the palate. Retrohaling gives a nice break of the softer notes, as there is kitchen baking spices up front with trailing nuts and cherries. The finish is medium in length with namely a soft cedar. 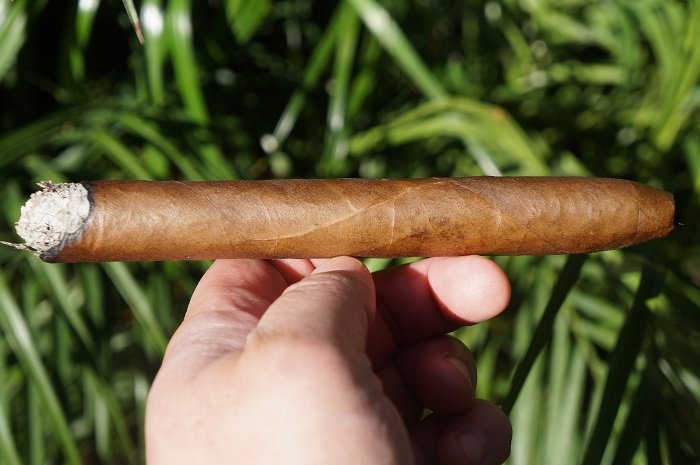 As the second third begins, I perform a second cut to see if I can loosen the snug draw and it really creates a fuller flavor profile. The cedar is spicier and the mushroom mustiness has a bit more depth to it. At an inch in, the spicy cedar is up front while the mustiness is in the background. The retrohale is an even mix of the cedar and mustiness. At an inch and a half, a faint vegetal note joins the profile. As the third comes to a close, the cedar and mustiness have become even again. The strength in this third bumped up to slightly below medium. 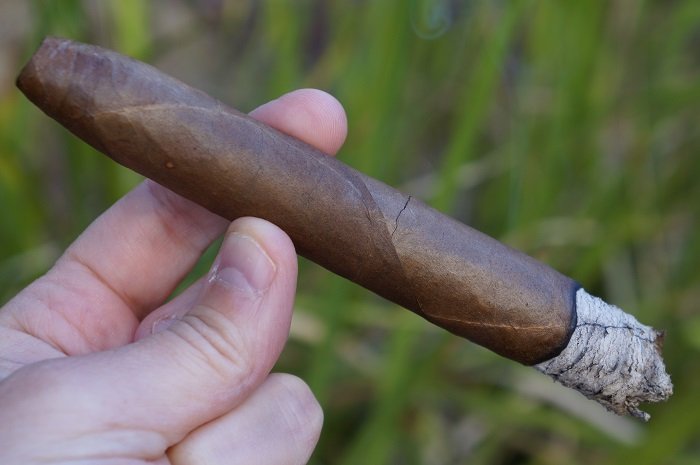 The second third begins by showing some similar honey notes and it is paired with this creaminess that has hints of orange blossom and vanilla bean. I am picking up shortbread cookie notes and with that is some cedar and graham cracker. There is an emergence of coffee and cream notes as well, and as I said before it is incredibly complex. This is a full flavored cigar and with that is a medium body and strength level offering. 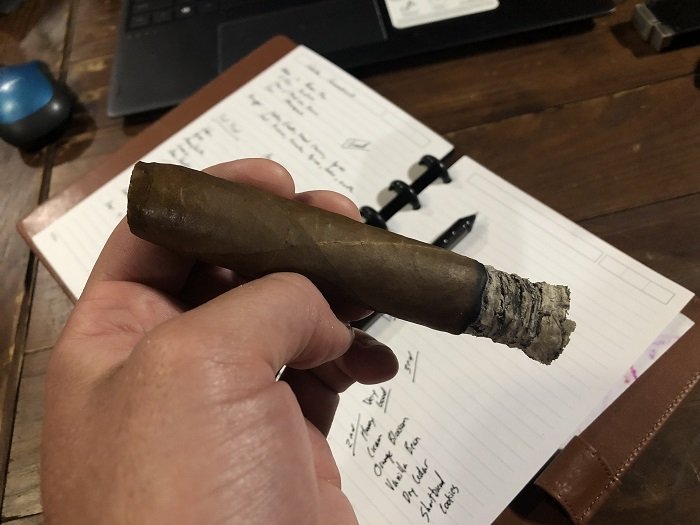 Light plus baking spices are still at the front of the profile, with faint cedar in the middle. Bready notes mix with the baking spices. The cedar is coating the tongue and palate on the post draw. An indistinct moss or chlorophyll joins the post draw as the second third settles in. Orange citrus is present at the end of the retrohale, as the bread notes begin to define the flavor profile. By the halfway point, spicy cedar has intensified to medium minus. No other flavor change ups here to remark on, which is surprising giving the mammoth size of the cigar. 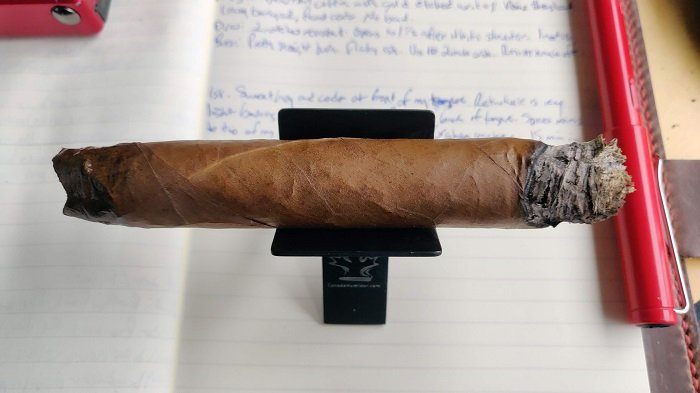 The second third is a continuation of the first third. Still medium body and strength profile of buttery/oily notes of nuts, toast, cedar and hay. At times, the kitchen baking spices and especially the cherries off the retrohale are present through the mouth draws, but it is unfortunate it’s not consistent. 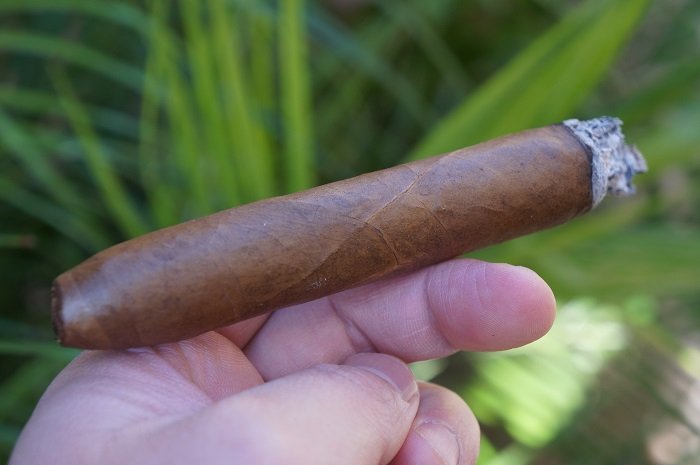 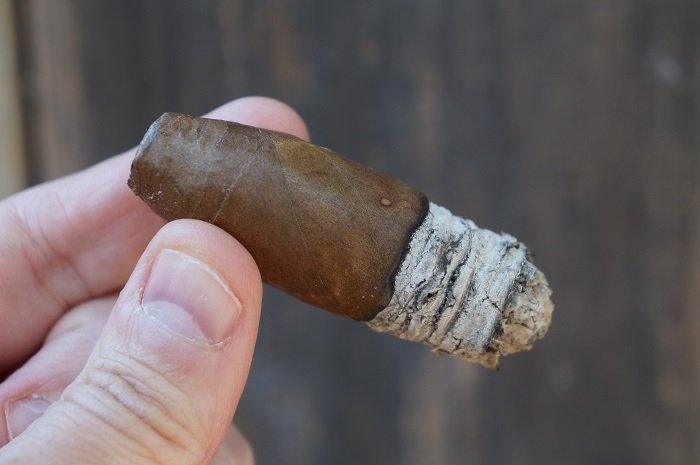 I am in the final third and it is showing some similar notes to the second third with some transitioning as well. I am picking up the orange blossom notes with vanilla bean and it has some almonds and Brazilian nuts with that. There is this faint peppery spice and it is paired with this leather and cedar quality. The finish is that of creamed coffee and this walnut and sweet spice is present as well. Full flavored, as it has been from the start, the finish has a medium body smoking experience with a strength level back to being between mild and medium. 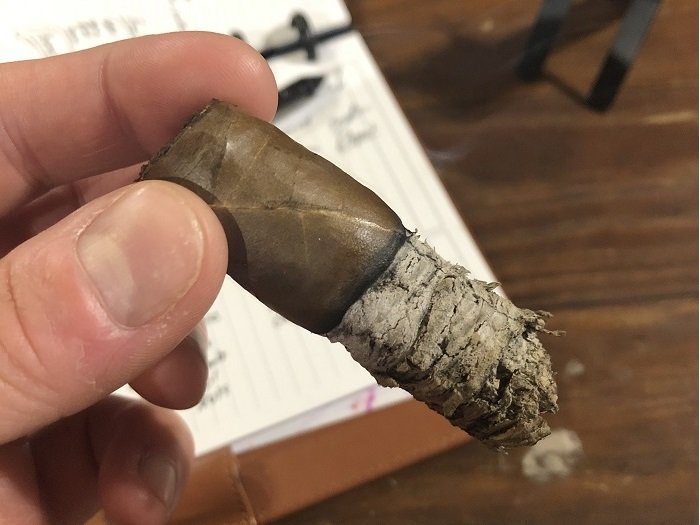 Citrus joins the retrohale at the front and middle, with dry cedar also settling into the middle of the profile. Earthy notes join the post draw as the last third settles in. The profile settles into a citrus, cedar and earth combination and doesn’t change for the remainder of the smoking experience. 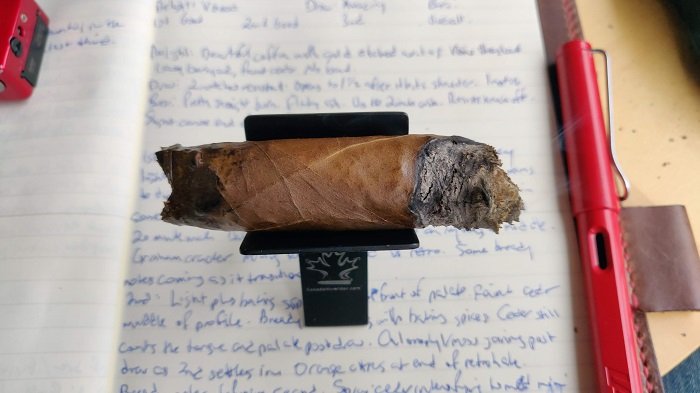 The last third finishes medium body and strength. It still overall has soft flavors (hay, cedar, butter, nuts) but this time around, a refreshing mint joins the mix, which really helps to break up the three hours of smoking. 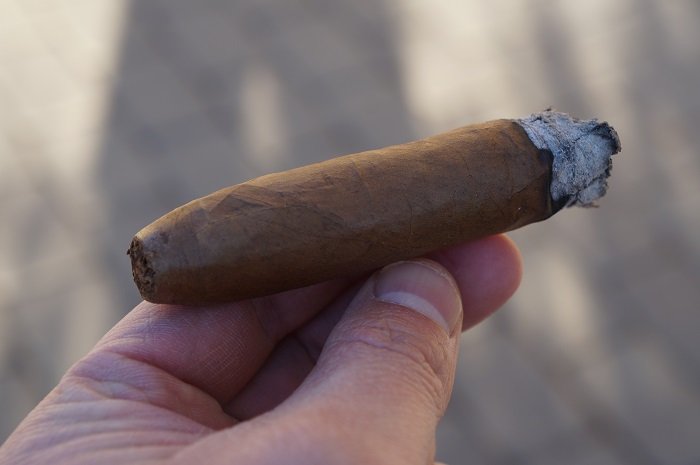 The burn was straight most of the way with moments of waviness. The cigar went out once at the halfway point and required a re-light. 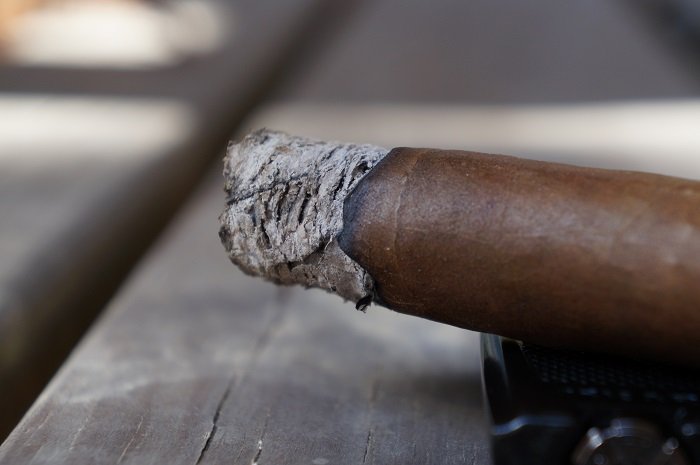 The burn was simply beautiful on this cigar from start to finish. I am probably the worst person to show the greatness in photos, but this cigar performed wonderfully. 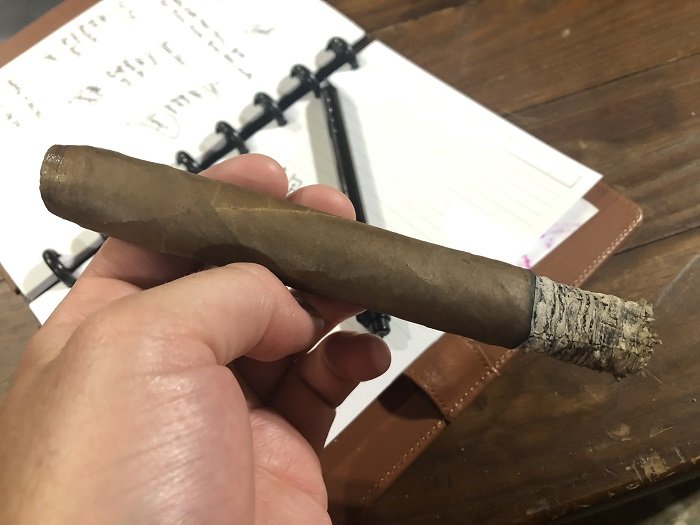 As you would expect with a Davidoff, the construction is fairly flawless. There was some flakiness to the ash, but the ash held on up to 2 inches and resisted attempts to knock it off. The only burn issues to remark on was a slight canoe at the end of the first third that required a small touch-up. 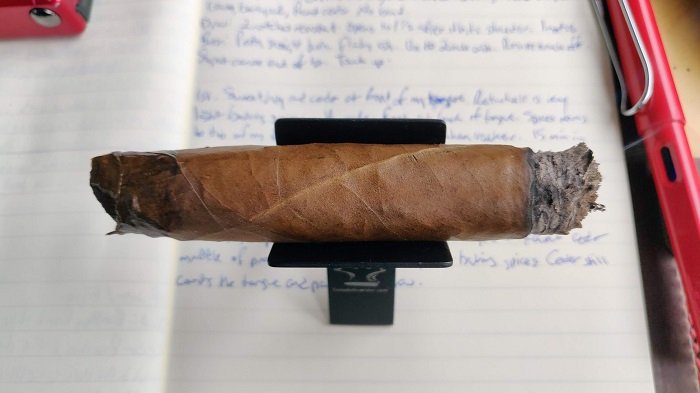 Burn performance was overall good. Only letdowns was a relatively large touch-up, flaky ashes and uneven burn. But the cigar did burn cool the entire time. 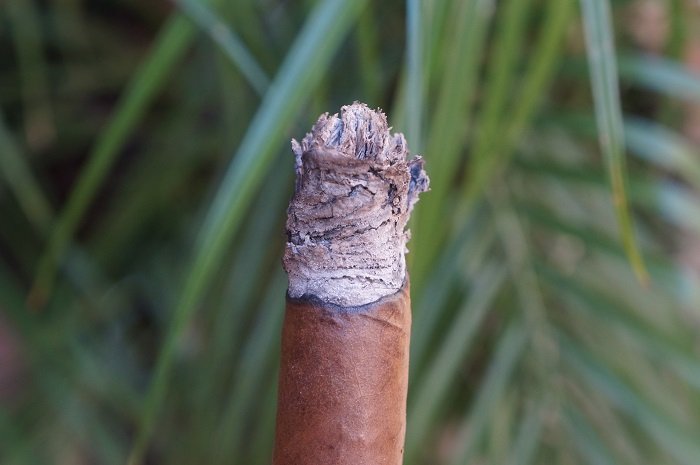 The draw started out a bit snug but after a second cut at the start of the second third, it was perfect.

The cigar began with cedar, mushroom mustiness and baking spice. As it progressed, the mustiness lost the mushroom component and the baking spice faded away. Some earthiness joined in the final third as some vegetal and floral notes hopped in and out. Construction was great and strength was slightly below medium most of the way. The Davidoff 100th Anniversary Diademas is quite smooth and had a set profile through the first two thirds. When the earth joined in in the final third, it knocked the enjoyment down a bit for me. This is a lengthy smoking experience, just shy of 4 hours and I would have been fine with just the first two thirds. For a cigar at this price point, it’s tough to find value in it, but it is an experience. If you’re interested in taking a shot at it, I would say it’s worthwhile to give it a try to see if it’s something you’d want to get more of. I’d have no problem smoking this again, but due to the price, it’s probably unlikely.

Like the burn, the draw was fantastic from start to finish. It was a cool draw and the resistance was absolutely perfect.

This cigar performed wonderfully and to be honest, it should. A cigar like the Davidoff 100th Anniversary Diademas, which is a pricey and massive Diademas should be a special cigar and that is what this cigar is and delivers. It is the Davidoff experience. The flavors were complex, showing depth and transition from start to finish, but always balanced. The body and strength did not take away from what the cigar delivered and by not overpowering the flavors, the cigar truly showed the elegance of all the tobacco used in the blend. You could really break this cigar down into quarters for a review and with the size, it took me over five hours to smoke, almost six. There is a commitment that comes with this cigar, one that should not be taken for granted, and if you respect that you will be left in awe when you are finished. Superb!

The draw initially started out 2 notches into the resistant spectrum. That draw opened to 1-1/2 notches at the shoulder, and then once the first third settled in it had backed off to just 1 notch of resistance.

Total smoking time was 3 hours and 25 minutes, which might seem like a long time but given the 9-1/4 inch length I was expecting a smoking time well over the 4 hour mark. My overall flavor experience was good, with a near flawless burn and construction to match. The profile never seemed to move above medium strength, with a list of flavors that included sweet hay, cedar, baking spices, creaminess, graham cracker, bread, earth and orange citrus. I was happy to have had the opportunity to smoke the Davidoff 100th Anniversary Diademas.

The draw was perfect as it gave the ideal air flow.

Sink into a relaxing, comfortable couch, and clear three hours of your afternoon to enjoy this cigar. I’m happy to say the Davidoff 100th Anniversary Diademas is classic Davidoff just the way I like it. Soft and nuanced without the strength to beat you over the head. Hay, cedar, nuts, butter and last third’s refreshing mint carried the three hour smoking time without feeling too taxed. Not a wow factor at any given time, but nonetheless a solid, relaxing time to spend my Saturday afternoon.