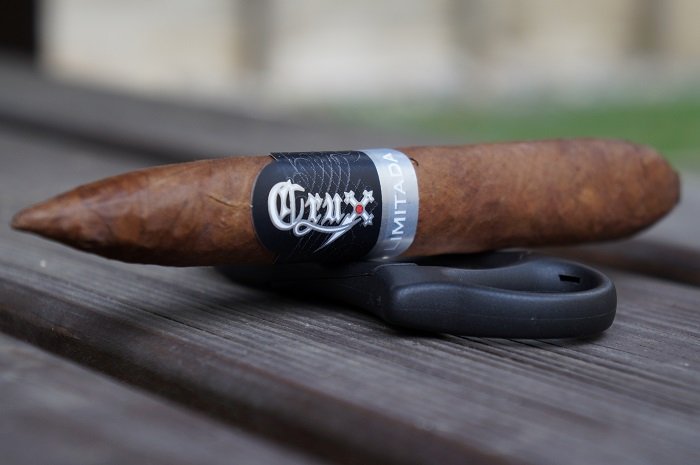 The wrapper on the Crux Limitada Short Salomone is light brown and has some well pressed veins present. The shape is interesting as it is a Salomone with a soft rectangle press. The seams are smooth and well blended and the caps at the head and foot are done well. The band is the old style from the brand in black and silver and denotes the company and line. The aroma from the wrapper is a mix of wood and hay and the foot opening is so small I don’t get anything other than wrapper notes. The pre-light draw reminds me of iced tea and has a finish of cedar and hay. 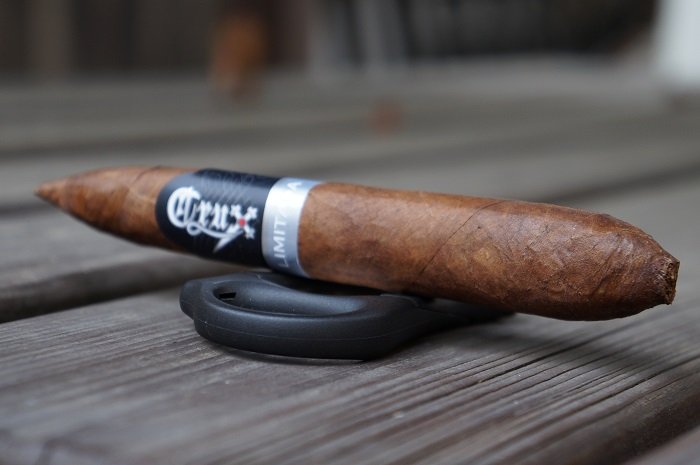 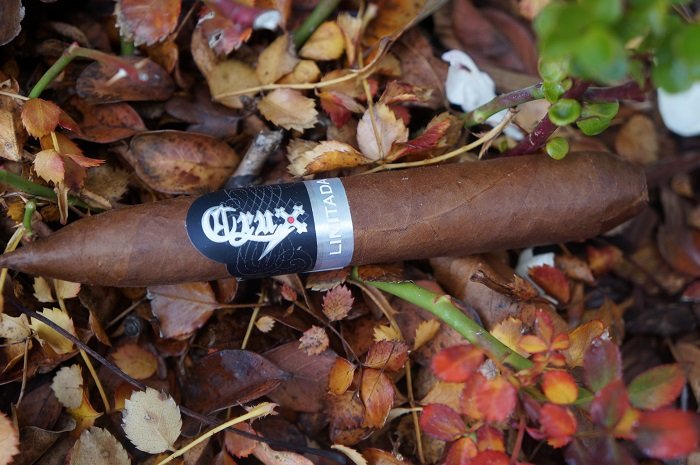 The Crux Limitada Short Salomone has some of the best looking wrapper coloration I’ve seen in a while. The wrapper has a uniformed Colorado Red with a nice velvety feel. Veins are well pressed, seams tight, bunch and roll even and the aggressively tapered head is well wrapped. Aromas from the wrapper give a mixture of pungent barnyard and cedar. Nosing the foot tells jammed prunes, red pepper and cedar. Cold draw gives minerals, nuts and aged cedar.

The cigar begins with heavily charred wood and intense cinnamon. At a half inch in, both the charred wood and cinnamon have mellowed as the burn reaches the apex of the bulb. At three quarters of an inch in, the wood has a more defined oak characteristic and is carrying a light char while the cinnamon has morphed into a general baking spice and is behind the oak. The retrohale is lightly charred oak and mustiness. At an inch and a half, some mustiness joins the profile. As the third comes to a close, the charred oak is in the lead with the mustiness right behind and the baking spice right behind it. The strength in this third was slightly above medium. 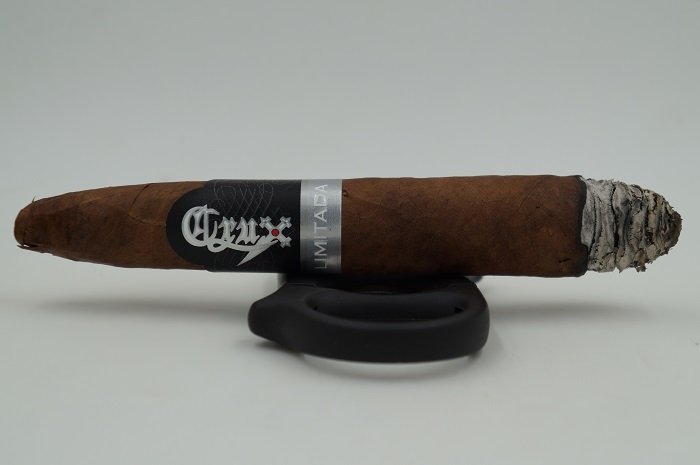 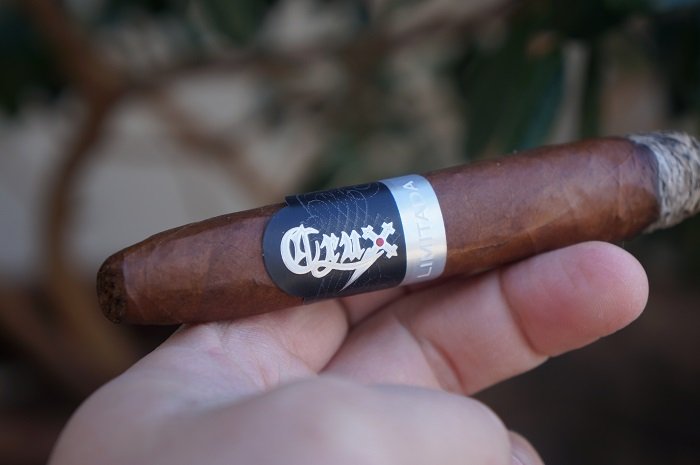 The first third has a profile that is medium strength and body. Flavors consist of a mixture of cedar wood, minerals and roasted nuts. Retrohaling gives way to greater cedar and minerals. The finish has a mellow raw cedar and mineral mix. 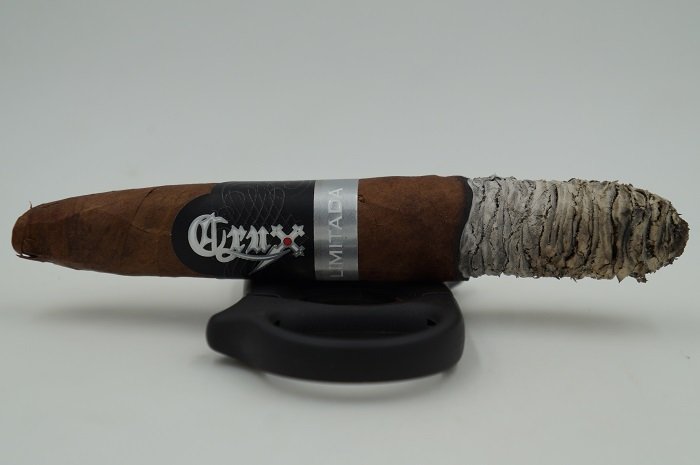 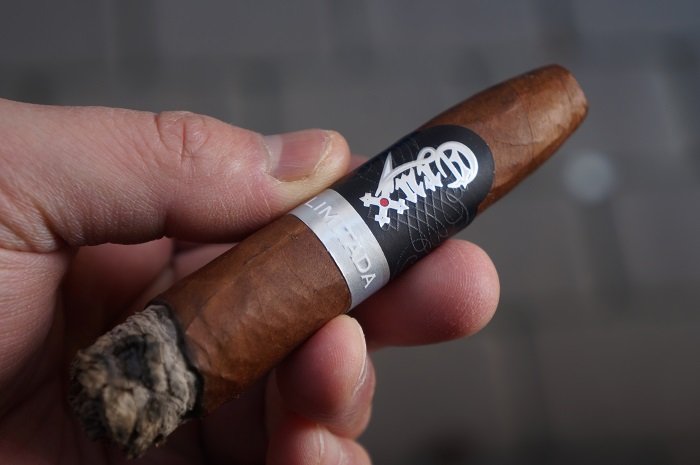 The second third is still a medium body and strength profile. But what has changed is, the flavor combination. There is far less roasted nuttiness, resulting in less balance and nuance. The ending result is cedar and minerals.

As the final third begins, the baking spice is gone and the profile is charred oak with mustiness right behind. At a half inch in, some dry earth joins which creates an overall dry profile. The retrohale is dry oak and mustiness. The cigar finishes with the same charred oak, mustiness and dry earth. The strength remained at slightly above medium. 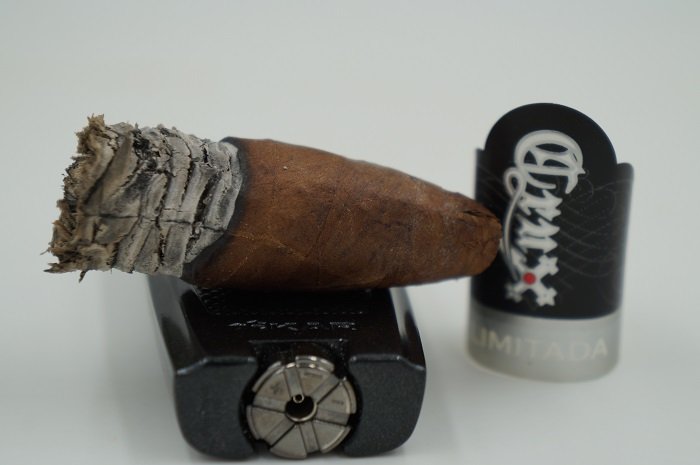 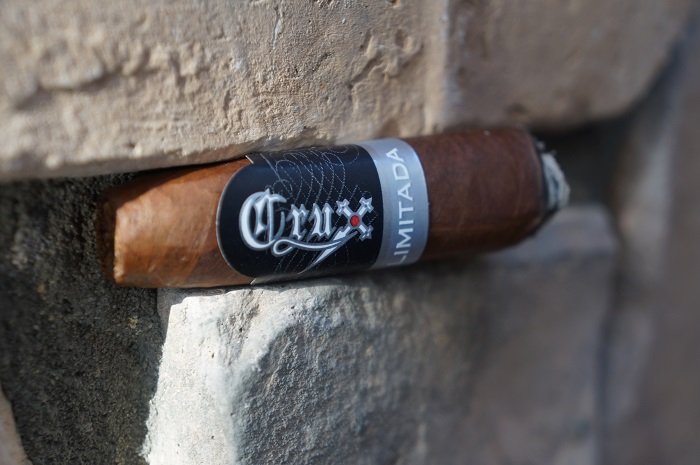 The final third is the same result in less balance and nuance but the profile gives a spicier delivery of red pepper spice in combination with cedar and minerals. At this point, there’s very little soft/white notes such as the roasted nuts within the first third.

The burn was perfect and never needed any attention. The ash held on in inch and a quarter increments. 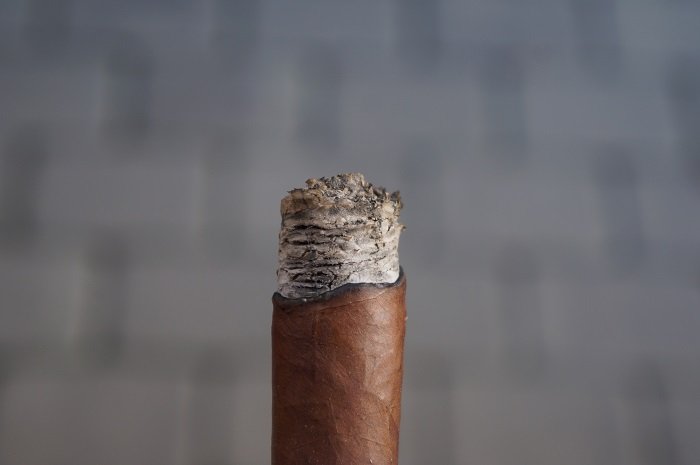 The cigar began with heavily charred wood and intense cinnamon which mellowed fairly quickly. The wood became more defined as oak and the cinnamon morphed into baking spice. As the cigar progressed, it gained some mustiness and in the final third, the backing spice left and some dry earth joined. The construction was perfect and strength was slightly above medium the whole way. The Crux Limitada Short Salomone had a nice start in the first third but then became average after that. I’ve never really found a great experience in the Limitada line other than the IPCPR/Show editions which I’ve really enjoyed. This is an interesting vitola, but I don’t think it showed better than the other Limitadas. At the price point, I’m not likely to return to this often and will look towards the IPCPR/Show editions for a more enjoyable experience.

The draw was also perfect, striking the ideal air flow.

It seems like within the last few years, each year there is a variation of the original PB5 Limitada utilizing the company’s signature Nicaraguan Engañoso wrapper. Except for the 2016 IPCPR show variant, with each passing year, the line seems to deteriorate in quality. The Crux Limitada Short Salomone has some good qualities within the opening third, but past that mark, the balance is thrown off and nuance declined. This is my least favorite of the line and will focus on the other vitolas over this one. On a side note, the day before this review, I smoked a 2016 IPCPR show Limitada. Surprisingly, the 2016 IPCPR and Limitada Short Salomone essentially had no similarities. The 2016 IPCPR was very well structured, nuanced and harmoniously in balance, whereas the Limitada Short Salomone was basically the opposite. I know we are talking about cigars with big gaps in age, but the interesting aspect was the polar opposites in flavor profiles.