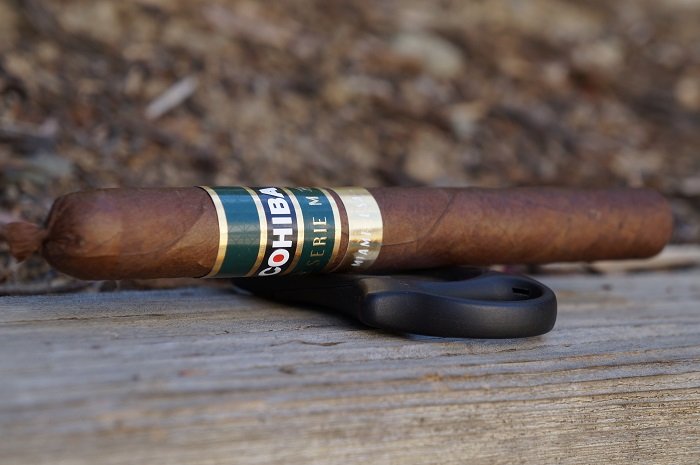 Aaron: The wrapper on the Cohiba Serie M Corona Gorda is medium brown and has a network of lightly raised veins. The seams are smooth, head finished off with a small flag and foot covered with folded over excess wrapper. There are two bands, with the primary being the newish design for the brand and being green, black and gold and denoting the brand and line. The secondary band is gold and white and designates the city and country of origin. The aroma from the wrapper and closed foot is Spanish cedar and light earth. The pre-light draw with the closed foot is quite tight but brings a light, musty cedar note along with a mild spiciness on my lips.
Seth: The Cohiba Serie M Corona Gorda doesn’t have that finish like the original. Still attractive though. Very firm cigar with a closed foot and tailed cap. The wrapper has a nice marble quality, and it is showing some Natural and dark Colorado qualities. Texture is slightly gritty. Aromas of rich earth and strong stone fruit notes. Manure as well. Faint bit of ammonia.
John: The Cohiba Serie M Corona Gorda certainly pulls out a lot of stops on the pre-light experience. The cigar is cellophaned, and instead of having a UPC sticker on the cellophane it’s integrated on the back of the cigar band. The cigar has a cedar spill backing, it’s double banded with a ‘Miami, USA’ secondary band, and has an artisanal complication of a fan style cap along with a closed foot. Aromas off the wrapper included intense cedar, immediately when removed from the cellophane. Then on closer nosing, spicy cedar, bread and some vegetal dankness. From the foot, mild wood, vegetal notes and light hay.
Jiunn: The Cohiba Serie M Corona Gorda has a Colorado Claro shade wrapper. Veins are well pressed, seams tight, bunch and roll even and flared head is well wrapped. Aromas from the wrapper and enclosed foot tell black pepper, barnyard and cedar. Cold draws reveal cedar and minerals. 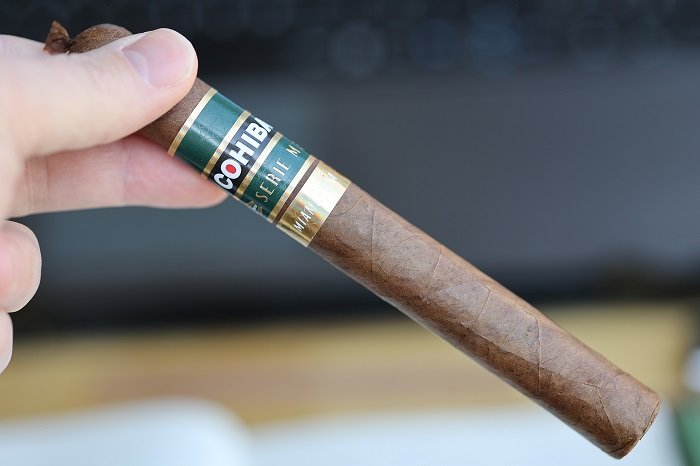 Aaron: The cigar begins with toasted cedar, baking spice and light mustiness. At a half inch in, the baking spice mellows a bit. The retrohale is toasted cedar and zingy baking spice. At an inch in, some light earth has joined the profile. The baking spice loses the zing on the retrohale. As the third comes to a close, the toasted cedar is up front with baking spice a bit behind and light mustiness and earth in the background. The strength was right at medium.
Seth: The first third starts out with honey and stone fruit notes. It has some rich earth qualities present as well, and there is this sweet, soft spice present. Bits of tobacco and hay with some mocha qualities. Very smooth. Medium in strength and body.
John: Sweet baking spices get things started here, as graham cracker combined with spices and wood into the post draw. Some creaminess develops through the retrohale right away. Baking spices move into the post draw at medium strength as it progresses. Once the first third had settled, vegetal notes are present in the middle of the profile. Some time later, mildly spicy cedar finishes each draw. Approaching the halfway mark, post draw wood takes on a lingering dry character.
Jiunn: The first third tells a story of mainly spicy cedar and minerals. Retrohaling is much better because it boosts the spicy cedar and minerals but also shows a creamy, roasted nutty nature. The finish is all about a long and lingering spicy cedar and mineral as well. Strength is medium-full and body is medium. 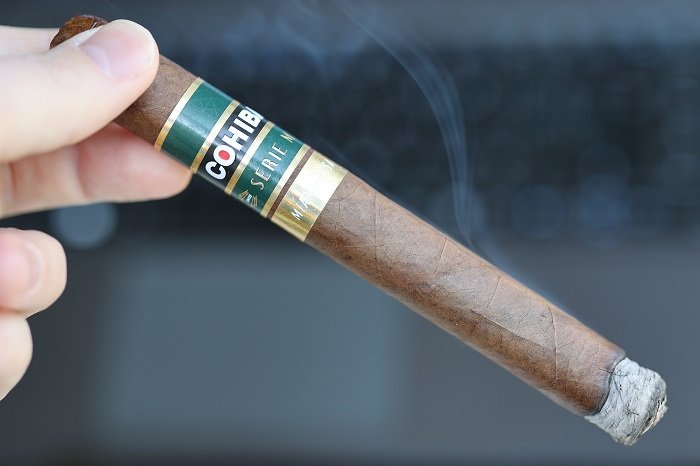 Aaron: As the second third begins, the baking spice becomes pretty mellow. At a half inch in, the earth is now slightly ahead of the baking spice. The retrohale is now musty, toasted cedar with earth and a very mild baking spice. At an inch and a quarter, the toast level picks up a bit. As the third comes to a close, the profile is heavily toasted cedar up front, earth a bit behind and light baking spice and mustiness in the background. The strength bumped up to slightly above medium.
Seth: The second third is somewhat like the first thirst. I am still picking up those honey and stone fruit notes, and it is now paired with this creaminess, mocha and earth quality. Bits of tobacco and soft spices as well. Medium in strength and body. Nice transition in flavor profile. Same level of complexity.
John: Mild, creamy wood on the first puffs with mildly spicy, dry wood into the post draw. Some musty vegetal notes join the retrohale as it continues. Post draw spices step up to medium-minus as it continues. Some time later, light chocolate pushes through the retrohale. The profile becomes wood forward in the bottom half of the second third.
Jiunn: The second third shows pockets of softer flavors of roasted nuts but the majority of the profile is still the same spicy cedar and minerals. Strength and body is unchanged at medium-full and medium, respectively. 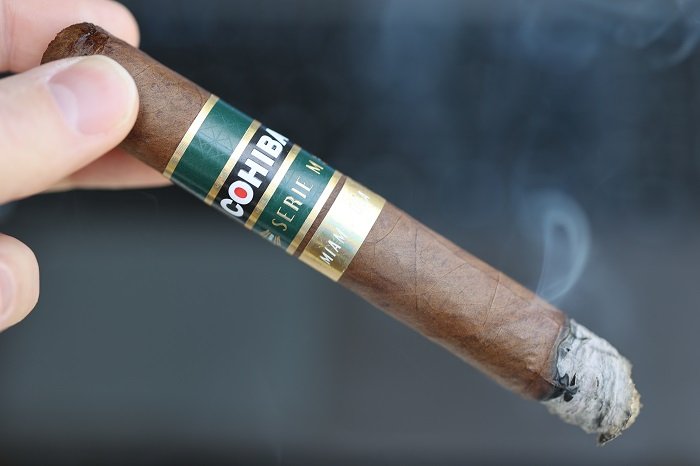 Aaron: As the final third begins, the earth is now right behind the heavily toasted cedar. The retrohale is now just toasted cedar and earth. At three quarters of an inch in, the baking spice has departed. At an inch in, the toast transitions to char. As the cigar wraps up, the profile is charred cedar just ahead of the earth with light mustiness in the background. The strength remained at slightly above medium.
Seth: The final third shows a return of the richness and sweetness from the first third and I am getting strong honey and stone fruit notes. Molasses qualities are present as well, but they are sweeter now. Soft spice notes with rich earth, mocha, and tobacco on the finish. Medium-full in strength and body.
John: The first few puffs are entirely wood forward at medium strength with tannic accents to the wood and some dryness on the post draw. Light-plus earth moves into the center of the profile as it settles in. The tannins on the wood move up to medium strength, progressing to the halfway point.
Jiunn: The final third shows more spice. Especially in the form of black pepper spice and cedar. The minerals still hold strong. Strength and body finishes the same medium-full and medium. 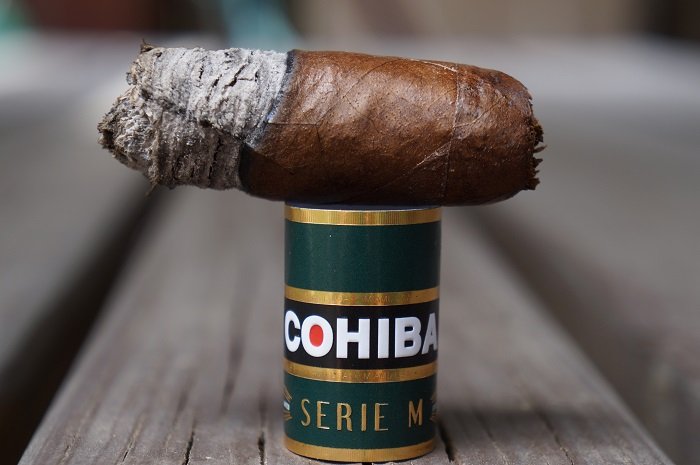 Aaron: The burn was slightly wavy at times, but never needed any intervention. The ash held on in inch and a half increments.
Seth: Beautiful burn.
John: The burn was relatively straight through the review, with the ash holding on up to 1-1/2 inch increments.
Jiunn: Burn performance was overall good. It felt like every time I drew on the cigar, I had to rev it up, as the smoke production was meek and burn line would have been uneven. Also, the cigar went out entirely on me within the second third. 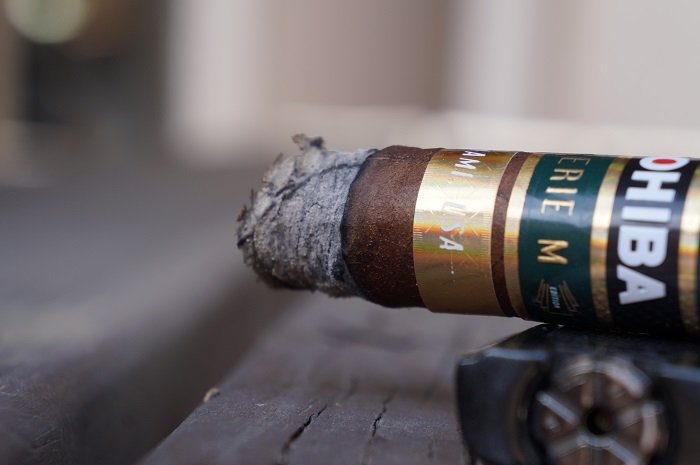 Aaron: The draw was pretty snug. A draw tool felt like it pushed through a blockage, but didn’t show any results until the final third once it burned through the problem area.
Seth: Very nice draw.
John: The draw initially started out 4-1/2 to 5 notches into the resistant spectrum which would have put it in the subpar category. But the draw opened to 3-1/2 to 4 notches into the resistant spectrum midway through the first third giving it an average score.
Jiunn: Great draw, giving the ideal balance between air flow and resistance.

Aaron: The cigar began with toasted cedar, baking spice and light mustiness. Some earth joined in a bit later. The second third saw the toast level become heavy. The final third saw the baking spice depart and the toast transition to char. The Cohiba Serie M Corona Gorda started on a positive note, but dropped down a level in each remaining third as the snug draw likely took a toll on the flavor profile. With this being the second vitola in the line we’ve reviewed, I’m still not enamored with this blend like others have been. The price point is really high, and I just don’t think it provides a smoking experience that’s on par with it. I don’t really see myself coming back to this.
Seth: The Cohiba Serie M Corona Gorda is a great cigar, and a nice follow up to the initial release. It is close in quality and flavors to the original, and different in it’s own way because of the vitola. I felt this offering was slightly more intense, with flavors and strength, and I am not surprised based off the smaller ring gauge. I was hesistant of this cigar at first, following what I believe to be a teriffic release, but Cohiba did well with this cigar. I am not sure what Cohiba’s plans are with the Serie M, but if they continue to release cigars in this manner, they will be as successful as Joya de Nicaragua with Numero Uno.
John: Uninspiring, flat, not dynamic are some of the terms I’d use to describe the review of the Cohiba Serie M Corona Gorda. The profile was relatively pleasant throughout, but at no point did I find the flavors engaged me, or provided any sort of complexity or nuance that I would expect from an ultra premium cigar. The burn was perfect but the draw started out subpar and eventually settled at average. At an ultra premium price point, I would consider this to be entirely unacceptable. A combination of the lack of dynamic flavors and high price point means little chance I would try this cigar again. Total smoking time was 1 hour and 50 minutes.
Jiunn: The second iteration of the Serie M is nothing like the original release. The original version was much fuller and complex in flavors, while this Cohiba Serie M Corona Gorda was basically all about spice in cedar and minerals. While I was able to justify the price point of the first release, by no means is this worth the money.