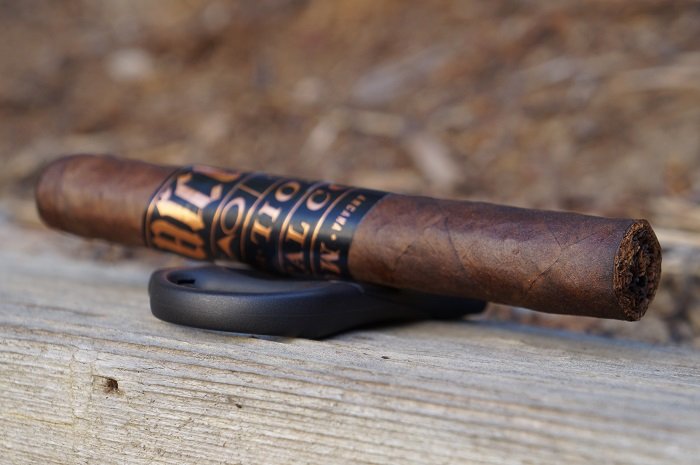 Aaron: The wrapper on the CAO Arcana Mortal Coil Toro is a marbled dark brown and has some raised, knotty veins. The seams are raised slightly while the top cap is lifting a fair amount. The band is black and copper, is applied on an offset and covers almost half of the cigar. The aroma from the wrapper is wood and dark earth while the foot brings a distinct fig sweetness and slight breadiness. If anyone told me they got Fig Newton from the foot, I wouldn’t argue. The pre-light draw is a very interesting spiced fig note, along with a mid-level spiciness on my lips.
Seth: Finished with a light maduro wrapper, the CAO Arcana Mortal Coil Toro is slightly gritty and rough in texture. There are veins present throughout, but they are not overly large. The wrapper has aromas of pinecones, earth, seasoned wood and spices. The foot is giving off notes of cherries, chocolate truffles and tobacco.
John: The CAO Arcana Mortal Coil Toro is presented in cellophane, and has a UPC sticker holding it closed. That sticker tears the UPC in half when opened. It’s impossible to miss the giant bronze and black band that takes up over a third of the cigar. Aromas from the wrapper included raisin, cereal and olives. From the foot, hay, mustiness and raisin.
Jiunn: The CAO Arcana Mortal Coil Toro has a proper even maduro wrapper shade to the broadleaf. Veins are roughly pressed, seams tight, bunch and roll even and head well wrapped. Aromas from the wrapper give ripe plums and a hint of metal. Aromas from the foot give the same as the wrapper and with some added white pepper spice. Cold draw provides green mango skin, plums and cedar. 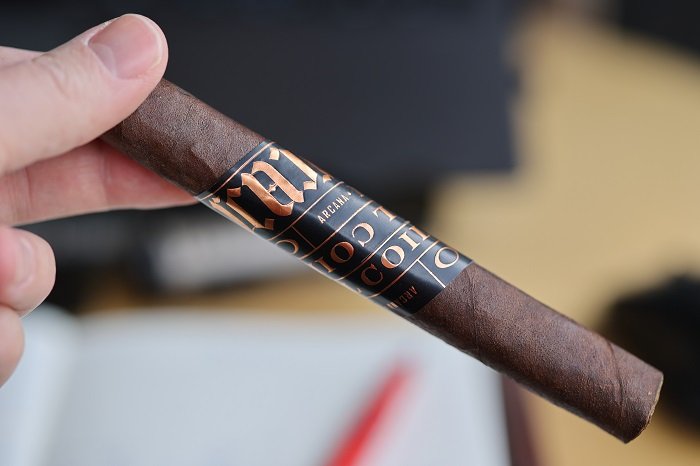 Aaron: The cigar begins with a mix of wood, dark earth and mild baking spice. At a half inch in, the wood and dark earth coat my palate and have a lengthy finish. At an inch in, the baking spice has morphed into black pepper. The retrohale is musty wood and dark earth. At an inch and a half in, the wood gains some mustiness and there is a very subtle stewed fruit sweetness in the background. The strength in this third was slightly below medium.
Seth: The cigar opens with sharp spice and rich earth notes. There are some herbal qualities present as well, and the finish is that of wood and tobacco. It is concentrated and yet a muddled flavor profile. In terms of strength and body, the cigar smokes around a medium-full level.
John: Mild sweetness and a cedar finish greet me with the first few puffs. A mild, dry wood takes up the post draw right out of the gate. As the cigar progresses, the sweetness evolves to a stewed dark fruit on the retrohale, bringing with it medium-full baking spices on the finish. A general creaminess is present on the palate as it progresses. The post draw dry wood moves up to medium strength, as some chocolate joins the retrohale by the 15 minute mark. By the 20 minute mark, much of the flavor complexity has fallen off, as the profile is quite wood forward. Approaching the midway point, the dark fruit sweetness is fighting against the wood profile.
Jiunn: The first third is mainly red pepper, sharper baking spices and cedar forward. Retrohaling gives increased notes of the same, which is actually a good thing, as the flavors taste fuller. The finish has a mixture of dirt and softer baking spices. Strength is medium plus and body is medium. 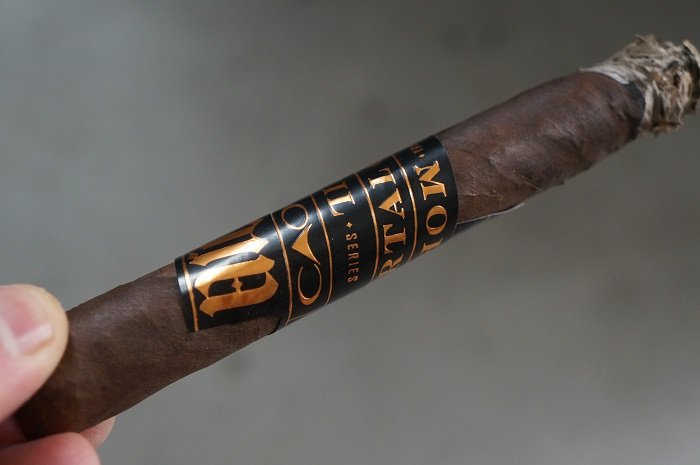 Aaron: As the second third begins, the musty wood gains a bit of a toasted note while the subtle sweetness has departed and the overall profile is a bit dry. The retrohale remains musty wood and dark earth. At an inch and a half in, the toast note has now become a light char. The strength in this third bumped up to medium.
Seth: The second third delivers a continuation of the first third and I am picking up earth and spice notes. The wood and tobacco qualities are present as well, and it has this sharp finish that is earth, metallic and floral like. Like before, medium-full in strength and body.
John: A raisin-like sweetness, with baking spices and mild chocolate define the retrohale going into the second third. A mild, dry cedar again takes up the post draw. The second third settles into a wood forward profile, with baking spices providing an accent. Mild chocolate joins the retrohale approaching the halfway point, but is being run over by the wood notes. In the bottom half, earth takes up the center profile at medium strength.
Jiunn: As I smoke through the tail end of the first third, one thought comes to mind, rough around the edges. The flavor profile is very rustic with the same flavors of red pepper, sharper baking spices and cedar. The cedar note is more invasive now, carrying a rawness to it. Strength and body is still medium plus and medium. 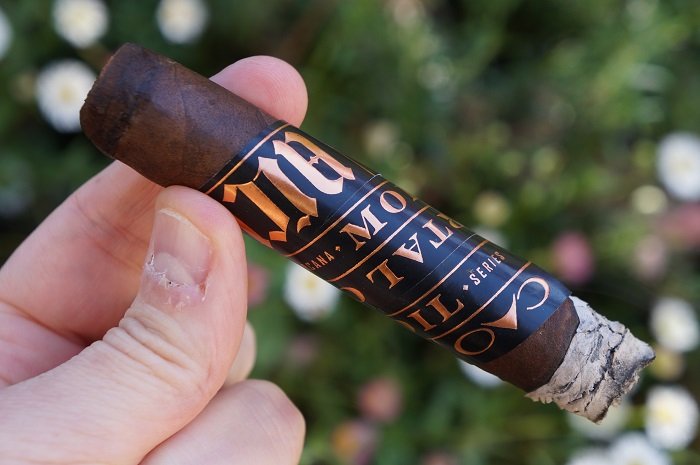 Aaron: As the final third begins, the profile is musty, charred wood and dark earth with mild black pepper. The profile is now quite dry. At an inch in, the char is now very heavy and a slight bitterness has joined the profile while the black pepper has departed. The retrohale remains musty wood and dark earth. As the cigar wraps up, it maintains the musty, heavily charred wood and dry dark earth along with slight bitterness. The strength in this third bumped up to slightly above medium.
Seth: The final third showed a continuation of the profiles delivered in the second third.
John: Earth and wood carry the Arcana Mortal Coil Toro into the last third. Mild chocolate is present again in the retrohale, as the post draw defines itself with mild, dry wood. The earth fades as the last third progresses, replaced with wood.
Jiunn: Starting from the beginning of the final third, the profile picks up harshness and a bitter bite to the same rustic flavors of red pepper, baking spices and cedar. The finish is most impactful, leaving bitterness and harshness that is long and lingering in all the wrong ways. Strength and body finishes medium plus and medium. 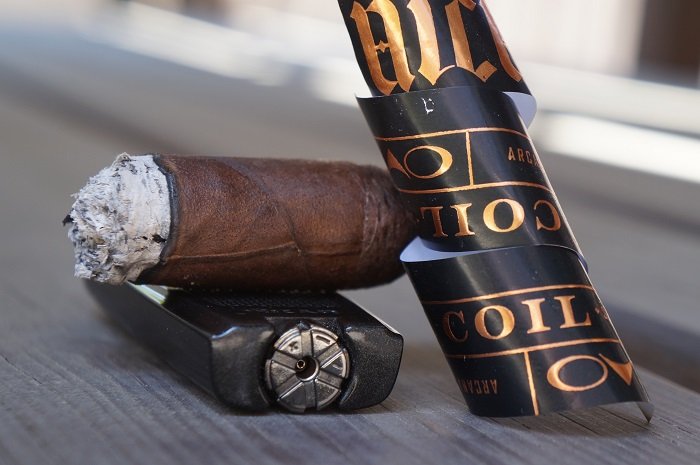 Aaron: The burn was straight throughout, but the cigar did go out twice, requiring re-lights.
Seth: Wavy at times, but no problems presented throughout.
John: The burn is straight, with the ash holding on up to 1-1/2 notches at times.
Jiunn: The burn was great aside from very pesky flowery ashes that kept on falling on my shirt and lap. 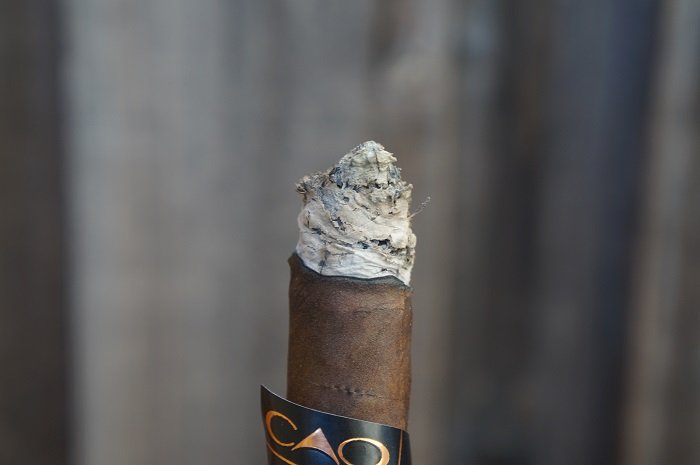 Aaron: The draw was perfect, with just the right amount of resistance.
Seth: Nice draw throughout.
John: The draw is at most 1/2 to 1 notch towards the open spectrum. Well in the zone of an ideal draw.
Jiunn: The draw on the other hand was perfect, giving the best air flow possible.

Aaron: It’s unfortunate that with how well the CAO Arcana Mortal Coil Toro provided aromas and pre-light flavor that the actual smoking experience couldn’t match up with it. The flavor profile was fairly mundane with the wood, dark earth and black pepper. The final third had a pretty big drop with the heavy char and light bitterness. Lots of show with no go for this cigar. I really don’t see myself returning to this one.
Seth: Am I the only one that could not figure out how to take the band off the first time? It was well hidden. Rough cigar and very disappointing. In some ways, the CAO Arcana Mortal Coil Toro is “mortal coil.” This cigar was the “trouble of my day/life.” Terrible performance in all aspects. Reviewed it and will never smoke again.
John: The CAO Arcana Mortal Coil Toro was a mostly wood forward cigar that tried at times to evolve beyond that base flavor note, but ultimately couldn’t succeed. There is nothing wrong with the cigar, it just doesn’t offer a profile that engaged my interest or attention other than a short period in the first third. The construction on the Arcana Mortal Coil was excellent. There is a short list of CAO cigars that I would go for before I would consider smoking this offering again. Total smoking time was 2 hours and 12 minutes.
Jiunn: One of my friends asked the other day, “is there a CAO worth smoking?” I said yes, and named cigars such as the original Amazon Basin and Sopranos. I then realized the cigars I named were all from years ago, and since then, CAO has been a miss for me. It’s actually a miss in the sense of not even hitting the dart board. The CAO Arcana Mortal Coil Toro was unbalanced, harsh and raw at times, and just not a good Connecticut Broadleaf. The best part was probably the pre-light.