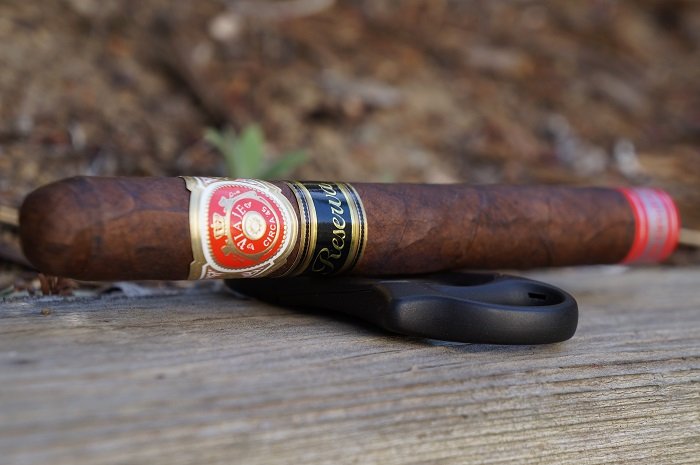 Aaron: The wrapper on the Viaje Circa ’45 Reserva Edición Limitada is a dark, marbled brown and has some thick but well pressed veins present. The seams are a bit raised in some places, but the caps are expertly applied. There are three bands, with the primary being a traditional Cuban design with a red, gold and white color combination and denoting the company and line. The secondary band is black and gold and denotes Reserva while the foot band is silver and red and is the same as the Cuban EL bands. The aroma from the wrapper is a mix of damp earth and smoky wood while the foot brings wheat bread and crushed red pepper. The pre-light draw brings a musty cedar along with a mild spiciness on my lips.
Seth: Just short of being a double robusto, the Viaje Circa ’45 Reserva Edición Limitada is firm throughout and has a bumpy texture to the wrapper. There are medium sized veins present throughout. The wrapper has an aroma of earth, milk chocolate, marshmallows and graham cracker, while the foot is giving off chocolate, rich earth, cherry and liqueur notes. The cigar has a nice maduro coloring, and there is some slight marbling with the chocolate brown coloring.
John: The Viaje Circa ’45 Reserva Edición Limitada has a lot going on for the pre-light presentation. The cigar is in cellophane, but lacks a UPC sticker. The cigar features a primary, secondary and foot band. Examining the cigar itself, there are visible lumps throughout the wrapper, and it overall has a rustic appearance. Aromas from the wrapper included spices, cedar and prunes. From the foot, I picked out sweet tobacco, hay and wood.
Jiunn: The Viaje Circa ’45 Reserva Edición Limitada has a blotchy and un-uniform wrapper. Veins are well pressed, seams tight, bunch and roll is overall even but with a couple soft spots and the head is well wrapped. Aromas from the wrapper give a pungent wet barnyard and cedar. Aromas from the foot provide rich, spicy raw cedar. Cold draw tells hay and ripe grapes. 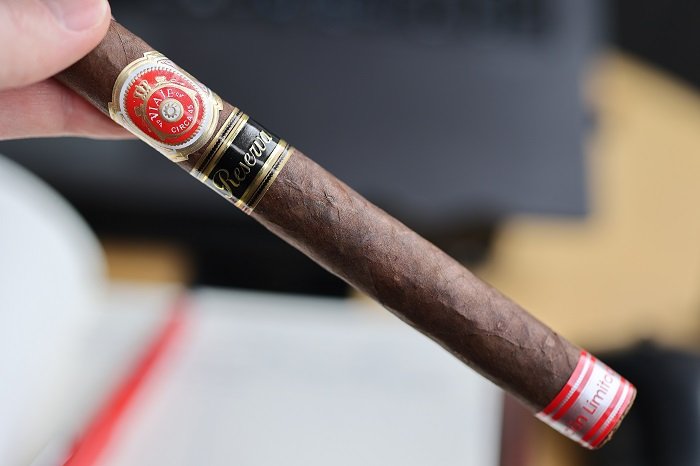 Aaron: The cigar begins with damp wood, light earth and mild black pepper. The retrohale is an even mix of the damp wood and earth. At an inch and a quarter, the damp wood remains up front while the earth has become slightly fuller and the black pepper remains mild in the background. As the third comes to a close, the damp wood and earth are even. The strength was right at medium.
Seth: The first third opens with sweet spice and honey notes. There are some rich earth qualities present a well, and it has this sweet and spicy nutty finish. There are some wood and hay notes present as well, and it is quite lovely. Not too rich, and not too powerful. Balanced. I would classify the cigar as medium-full in strength and body.
John: The first few puffs brought me flavors of baking spices, wood and sweetness. Raisin takes up the center of the profile right away, with baking spices at medium strength on the post draw. Pepper was lingering on my lips as the cigar took on a darker, almost toasted profile. Drying cedar joined the post draw as it progressed. At that point, I would describe the profile as bad jazz, a disharmonious cacophony of flavors. The raisin is driving the profile as the first third progressed, and I found it somewhat overpowering on my palate, coupled with the spicy wood. Some mild chocolate joined the retrohale approaching the halfway point. Cola like sweetness joined in the bottom half.
Jiunn: The first third’s flavor profile tastes muddled. It’s basically a blob of cedar, soft minerals and baking spices. Retrohaling helps the profile, since it deepens the flavors, but it’s mainly just sharper minerals and baking spices. The finish has a soft lingering cedar note. Strength and body is medium. 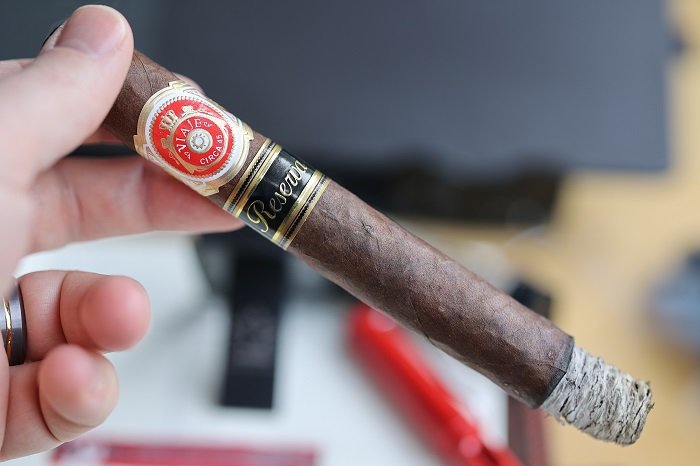 Aaron: As the second third begins, the black pepper has picked up and is now just behind the damp wood and earth. The retrohale is a mirror image. At an inch in, the earth has taken the lead and is a bit dry. At an inch and a half in, the damp wood and dry earth are back to even with the black pepper a bit behind. As the third comes to a close, the damp wood gains a heavy toast. The strength in this third bumped up to slightly above medium.
Seth: The second third shows some transitioning, and I am beginning to get a lot of black pepper notes. There are some earth and metallic qualities present as well, and very little sweetness from before. Black coffee notes are present, along with some wood and licorice notes. Wow, major transitioning. In terms of strength and body, medium-full.
John: The second third started out wood forward, with dry cedar to finish. Chocolate and raisin at light plus strength took hold on the retrohale, finishing with earth. As the second third progressed, complex sweetness and baking spices defined the center of the profile, finishing with wood. Approaching the halfway point, earth settled into the post draw at medium strength.
Jiunn: The second third’s profile shifts from muddled to mundane. The profile is highly earthy with soft minerals and cedar. This combination is the same through mouth draws, retrohales and the finish. Strength and body remains medium. 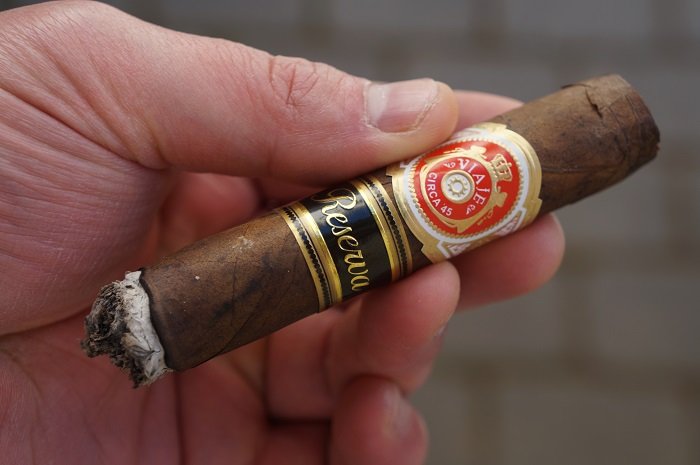 Aaron: As the final third begins, the heavy toast transitions to a decent level of char. At a half inch in, the char has transitioned back to a heavy toast while the dry earth is right behind and the black pepper is light in the background. The retrohale is toasted wood and dry earth. At an inch in, a slight bitterness joins the profile. As the cigar comes to a close, the heavily toasted wood and dry earth are even with light amounts of black pepper and bitterness in the background. The strength in this third bumped up to medium-full.
Seth: The final third shows a little bit of transitioning and I am getting a flavor profile that is predominately that of earth and wood. There are some soft baking spice flavors present and a touch of cocoa powder. I am picking up some nuts and coffee beans on the finish. Like before, the cigar is smoking at a medium-full level.
John: The last third was earth and wood forward in the initial puffs. As the cigar progressed, the earth dominated the profile, and took over the finish.
Jiunn: Mediocrity continues. It’s still the same medium strength and body with flavors of soft minerals and cedar. Wish I could write more about it, but I would just be faking it. 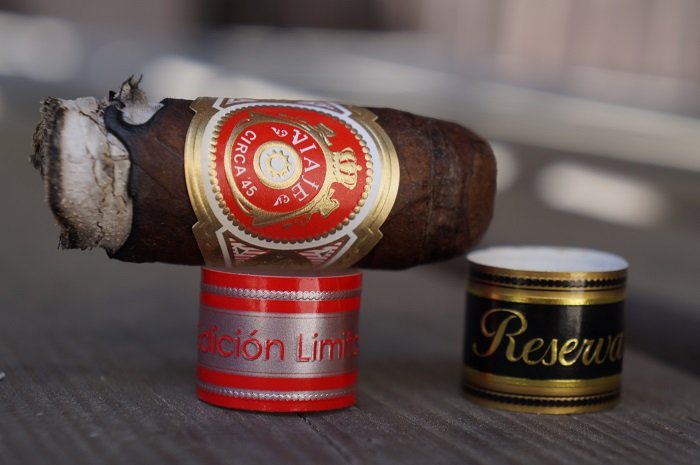 Aaron: The burn line was pretty straight throughout, but the main issue was at the end of the second third, beginning of the final third, the cigar went out three times fairly rapidly, requiring re-lights.
Seth: Had to touch-up the cigar a couple of times, but the burn was not major problem. Construction issues hurt the cigar in the end.
John: The burn was flawless, with the ash holding on up to 1-1/2 inches at times.
Jiunn: Burn performance was really good except for very annoying flaky ashes. Countless times the ashes fell on my lap and basically everywhere. 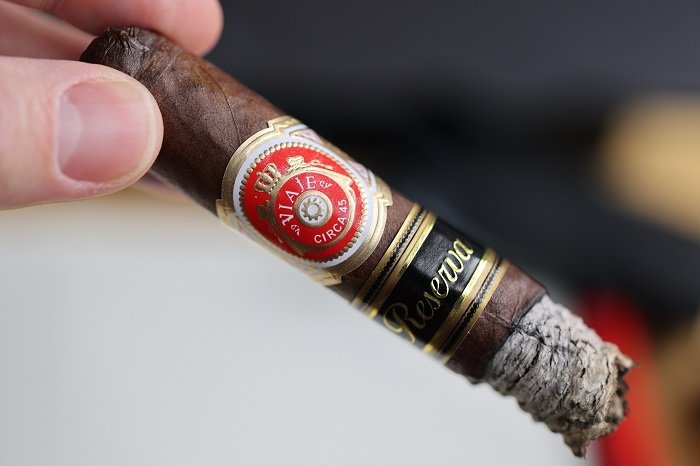 Aaron: The draw was fairly snug and a draw tool provided no relief.
Seth: I came across some problems with the draw in the second and final third. Slight plugging here and there.
John: The draw started out subpar, 4 to 4-1/2 notches into the resistant spectrum. It opened up to 3-1/2 to 4 notches some time in the first third, earning an average rating.
Jiunn: The draw on the other hand was perfect, giving the ideal air flow.

Aaron: The flavor profile of the Viaje Circa ’45 Reserva Edición Limitada was pretty monotonous. The damp wood and earth reminded me of some of the early Viaje’s I had smoked in the past as if they were fairly wet. Along with the burn issues and tight draw, it just wasn’t a good combination. With this being a limited version of this particular line, it baffles me a bit and intrigues me to try one of the other Reserva vitolas to see how it compares. In regards to this cigar though, I don’t see myself returning.
Seth: I did not have high hopes for the Viaje Circa ’45 Reserva Edición Limitada after the first third, and it quickly went downhill for the remainder of the cigar. The construction problems present really led to problems in terms of keeping the cigar lit and getting quality flavors, and I hope this was a singular cigar issue and not something present throughout the cigars produced. If the first third flavors were present throughout, it would be a solid cigar for the evening and relaxing. I thought the first third showed decent Mexican wrapper qualities.
John: The Viaje Circa ’45 Reserva Edición Limitada was a pretty average flavor experience, and when you factor in the price tag, I’d say a disappointing delivery for a Limitada release. The first third never seemed to find a balance in the flavors, with the second third being the most pleasant of the entire review experience. The last third was so earth dominant that it was off putting and difficult to enjoy. The burn was flawless, but the draw struggled from the onset, eventually opening up to an average level of acceptability. Again, not something you would expect out of a Limitada offering. I would not smoke this cigar again, there are numerous other Viaje offerings that are more affordable and provide a significantly better flavor experience. Total smoking time was 2 hours and 16 minutes.
Jiunn: Viaje continues to really disappoint me. For using such great tobaccos from Aganorsa, why is it one miss after another for the past couple years? I really do expect more given the pedigree of the origin of tobaccos. But I will still not stop believing. And will hold onto that feeling.