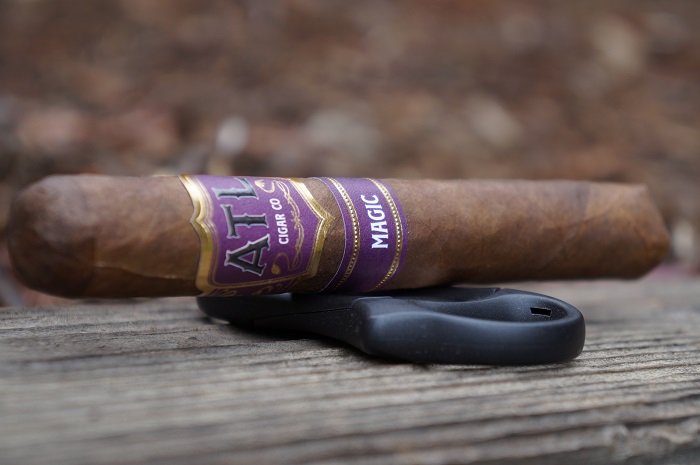 Aaron: The wrapper on the ATL Magic is a marbled medium brown with a fine toothiness and a couple of medium sized veins. The seams are smooth and the caps well applied. There are two bands, both with a purple, gold and white color combination. The primary band denotes the brand while the secondary band denotes the line. The aroma from the wrapper is a mellow fire cured smokiness while the foot brings spicy cedar and a stone fruit sweetness. The pre-light draw brings aged cedar, stone fruit sweetness and light fire cured smokiness along with a mild spiciness on my lips.
Seth: Finished with a nice milk chocolate covered wrapper, the ATL Magic is a light Maduro. There is oil present on the wrapper, along with some tooth and medium sized veins. I am picking up aromas of rich earth, spices, coffee and cocoa.
John: The ATL Magic comes in cellophane, and has a UPC sticker that tears in half when the cellophane is opened. The cigar has two bands, with ‘Magic’ as a secondary band, and an eye catching purple on gold color scheme. For aromas, I was picking up on a medium strength barnyard, wood and a faint patchouli. From the foot, I could pick out sweet hay and tobacco, both at light plus strength. The cigar felt consistently packed, with thick veins visible throughout the wrapper.
Jiunn: The ATL Magic has a great looking wrapper. Colorado Maduro showing good oils and lots of tooth. Veins are well pressed, seams tight, bunch and roll even and head well wrapped. Aromas from the wrapper give herbal tea, cedar and dates. Aromas from the foot tell rich white pepper, cedar and plums. Cold draw reveals subtle cedar and nuts. 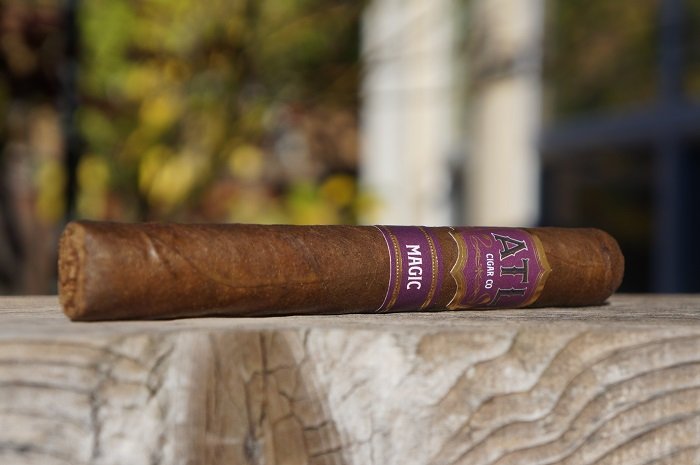 Aaron: The cigar begins with smoky, toasted oak and sharp black pepper. At a half inch in, the black pepper is no longer sharp, but still bold. At three quarters of an inch in, a light mustiness joins the profile. The retrohale is musty, toasted cedar and nose tingling black pepper. At an inch and a half, some dry earth joins the profile. As the third comes to a close, the profile is musty, toasted and lightly smoky oak with black pepper a bit behind and dry earth a little further behind. The strength was slightly above medium.
Seth: The first third opens with dry earth, leather, cocoa and roasted coffee bean qualities. Medium in strength and body. Simple, but enjoyable.
John: My first few puffs brought dry wood and medium strength baking spices. The dry wood carries into the post draw. As the first progresses, tobacco sweetness pushes into the profile, as hay moves into the center of the profile. Once it settled in, sweet vegetal moved to the front of the draw. Some mustiness joined the hay in the middle of the profile as the first third approached the midway point. The post draw dry wood became a bit distracting, as the intensity was exceeding the main profile. In the bottom half, the profile was wood dominant.
Jiunn: The first third’s flavor profile is fairly generic. Cedar, subtle roasted nuts and a hint of baking spices. Retrohaling breaks away from the subtleness as it reaches greater depth of the same mentioned flavors. The finish is short with cedar. Strength and body is medium. 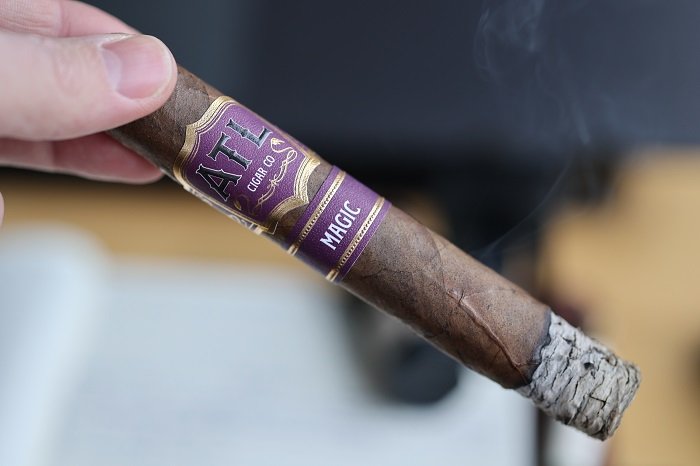 Aaron: As the second third begins, the black pepper has become even with the musty, toasted and lightly smoky oak up front. At a half inch in, the toast level becomes pretty heavy. The retrohale has the musty, toasted oak even with the dry earth and the black pepper is a bit behind and has lost the stinging sensation. At an inch in, the black pepper has moved back to become even with the dry earth. At an inch and a half in, the earth has moved up to become even with the musty, toasted oak and the overall profile is now a bit dry. The strength remains at slightly above medium.
Seth: The second third continues to deliver those flavors of roasted coffee beans, cocoa, dry earth and leather. Nuts emerge in this third as well, adding a little bit more complexity, but nothing over the top. Medium in strength and body.
John: Dry wood took the profile into the second third, with hay still in the center of the profile, and dry wood on the post draw. There was no other evolution until the halfway point, where light mustiness joined the hay in the center of the profile.
Jiunn: The second third sticks to the same profile as the first third. Still medium strength and body with cedar, nuts and baking spices. The flavors become a tad bit fuller but not enough to change my perspective on overall enjoyment. 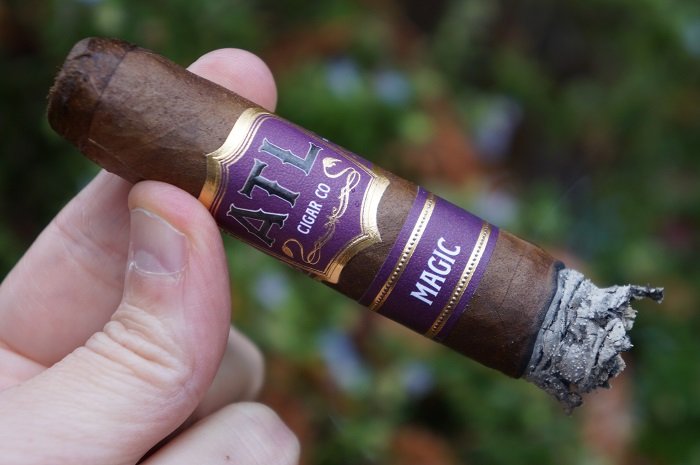 Aaron: As the final third begins, the heavy toast has transitioned to light char. The retrohale is now musty, toasted cedar and dry earth. At an inch in, the black pepper is still holding on to the middle of the profile. As the cigar comes to a close, the profile is musty, lightly charred oak even with the dry earth and black pepper a bit behind. The strength in this third bumped up to medium-full.
Seth: The final third was like the second third. Notes of roasted coffee, cocoa, dry earth and leather. I was also picking up some Asian spice with the nut qualities on the finish. I could pick up some serious clove notes. Like before, medium in strength and body.
John: The last third kicked things off with more wood, mild sweetness and mild baking spices. Some tannins quickly joined the wood on the post draw. By the halfway point, the tannin intensity has moved up to medium strength, at times overpowering the rest of the profile. Acrid earth started to build through the center of the profile in the bottom half, distracting from the other flavors.
Jiunn: The final third changes it up but just a little. Still the uneventful cedar, nuts and baking spices. The cedar does pick up a burnt/char character. Strength and body finishes the same medium. 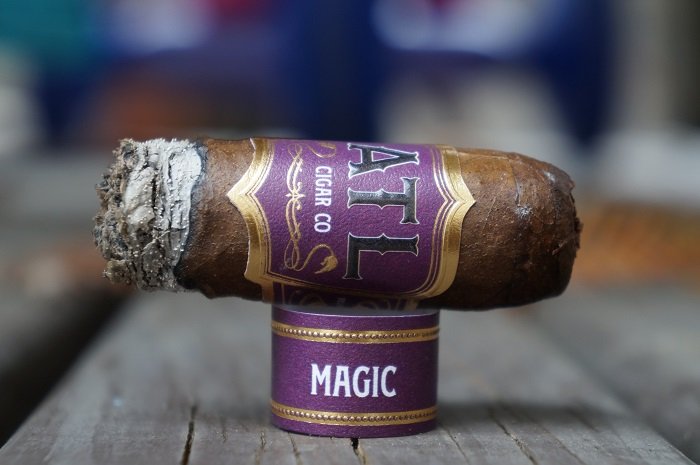 Aaron: The burn was slightly wavy at times, but never required any attention. The ash held on through each third.
Seth: Great burn.
John: The burn was fairly straight through the entire review process, with the ash holding on up to 1-1/2 inches before I would knock it off.
Jiunn: Amazing burn performance. Even burn, tight ashes, cool burning temperature and ample smoke production. 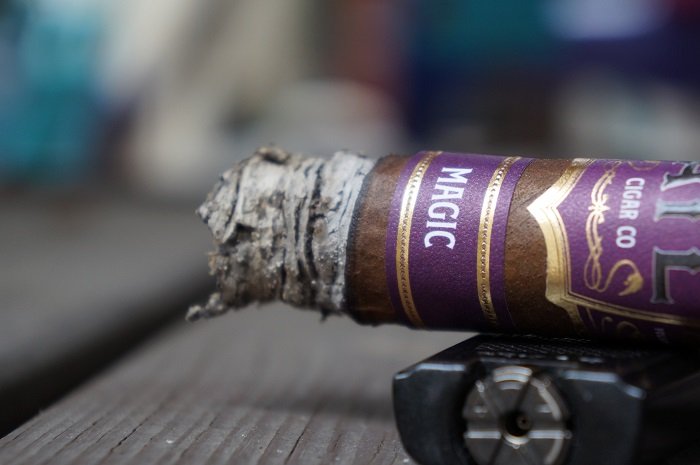 Aaron: The draw was perfect through the first two thirds and then became a little loose in the final third.
Seth: Perfect.
John: The draw had some resistance to it, roughly 2-1/2 to 3 notches into the resistant spectrum.
Jiunn: The draw was also amazing. The ideal air flow and resistance.

Aaron: The flavor profile began with toasted oak and black pepper, later seeing some mustiness and dry earth join in. These components moved around a bit as the toast increased and later transitioned to a light char. The ATL Magic was pretty full bodied, so I got a good dose of the flavors, but what was presented wasn’t all that interesting, just a pretty common combination of flavors. If you’re a big fan of oak, earth and black pepper, you’ll find something you enjoy here, but for me, it was a bit too mundane and I don’t really see coming back to this one. It was an OK introduction to the brand and I look forward to trying some of their other blends as they each come from different factories.
Seth: The ATL Magic was an average cigar, but enjoyable. I would not say there is anything to write home about, except that it was consistent from start to finish. It lost a little bit of that pop from the first third, but there was never this amazing start followed by a dramatic drop and awful finish. It was an average Mexican San Andres offering at a nice price point with great construction. It falls into that softer Mexican offering category on the market, and that is not typically my cup of tea. Would smoke at an event or if offered, but I would not see myself reaching out to purchase and smoke on my own.
John: The ATL Magic delivered a largely wood forward flavor experience, with occasional mustiness, tobacco sweetness and vegetal notes. The last third was overshadowed by acrid earth that took away from the fairly consistent profile up until that point. Overall, I didn’t take anything away from the review that would motivate me to return to the Magic, but I am keeping an eye on the ATL brand’s other releases. The burn was excellent, and the draw had some resistance to it. Total smoking time was 2 hours and 12 minutes.
Jiunn: There wasn’t anything magical about the ATL Magic. The blend was straight average, showcasing cedar, subtle roasted nuts and baking spices. Within the sea of Mexican San Andres in the market, few are excellent, and most are average. In order to be excellent, the profile needs to be fuller in flavor and deliver more than just earth tones. I’ll have to look forward to another ATL cigar as this one didn’t do it for me.