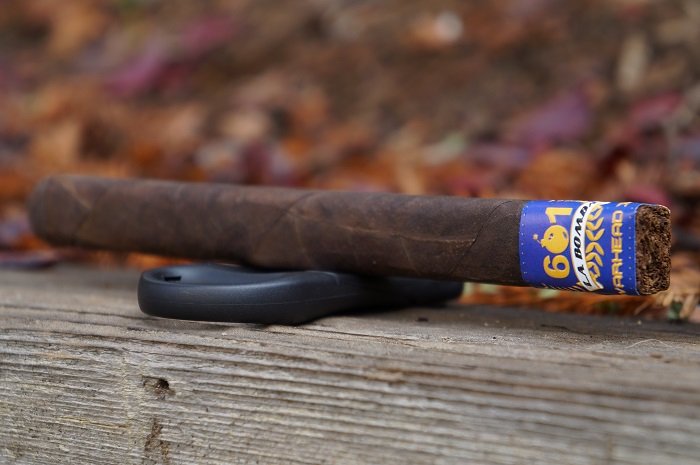 Aaron: The wrapper on the 601 La Bomba Warhead VII is dark brown with some lighter marbling and a couple of thick but well pressed veins. The seams are a bit raised while the caps are decently applied. The cigar seems a bit light for its size. The band for the cigar is at the foot and carries the bomb shape the line is known for and this iteration has a purple and yellow color combination. The aroma from the wrapper is wood, dark earth and dark chocolate while the foot brings wood along with light ammonia and spice. The pre-light draw brings a lightly musty and airy cedar along with a mild spiciness on my lips.
Seth: The 601 La Bomba Warhead VII is a solid maduro with leather like texture. Long, miniature, pressed, chocolate bar. Medium sized veins throughout. Aromas of rich earth, stone fruit, rich spices, leather and tobacco. Not bad in appearance, but not the strength of the cigar. Nice aroma.
John: The 601 La Bomba Warhead VII comes in cellophane, and has a UPC sticker with an integrated tear point that leaves it intact when the cellophane is opened. The cigar has no main band, but has a foot band indicating ‘601 La Bomba Warhead VII’. In addition, the cigar has an artisanal complication of a soft box press. For aromas, I was picking up on barnyard, cedar and sweet tobacco. From the foot, there was hay and stewed raisin.
Jiunn: The 601 La Bomba Warhead VII has an even maduro wrapper shade showing fine traces of tooth. Veins are well pressed, seams tight, bunch and roll even and head well wrapped. Aromas from the wrapper tell abundant barnyard and seeded red pepper spice. Aromas from the foot give that same red pepper spice with accompanying cedar. Cold draw gives rich soil and hay. 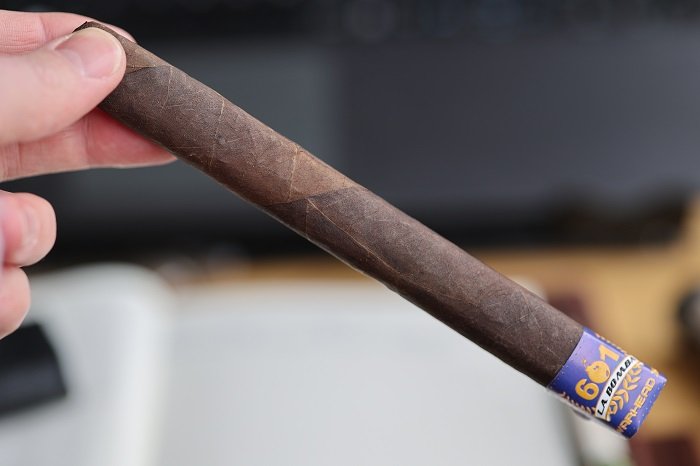 Aaron: The cigar begins with lightly toasted dark wood and potent, sharp black pepper. At a half inch in, a light mustiness joins the profile as some cinnamon is mingling with the black pepper. At an inch in, the cinnamon is no longer present. The retrohale is musty, toasted dark wood with light black pepper. At an inch and a half in, the lightly musty and toasted dark wood is even with the black pepper. As the third comes to a close, there are hints of dark chocolate. The strength in this third was medium-full.
Seth: The cigar starts out with rich earth, leather, wood, dark cocoa and dark spice notes. The cigar has a long finish, and there are roasted coffee notes present as well. Medium-full in strength and body. It seems tight overall. Needs to open some.
John: My first few puffs were flavors of wood, baking spices, tobacco sweetness and a sharp wood with baking spice finish into the post draw. Rich sweetness begins to lead the profile as the first third settles in. As the profile continues to evolve, cocoa moves into the center. Approaching the halfway point, bread is present on the retrohale, mixing with the wood already there.
Jiunn: There’s a lot of density. Dense, medium-full body, chalky cocoa, compacted rich soil, leather and a good amount of red pepper spice to boot. The spice needs a double take, as it’s long and lathering on the rear palate. Strength is medium-full. 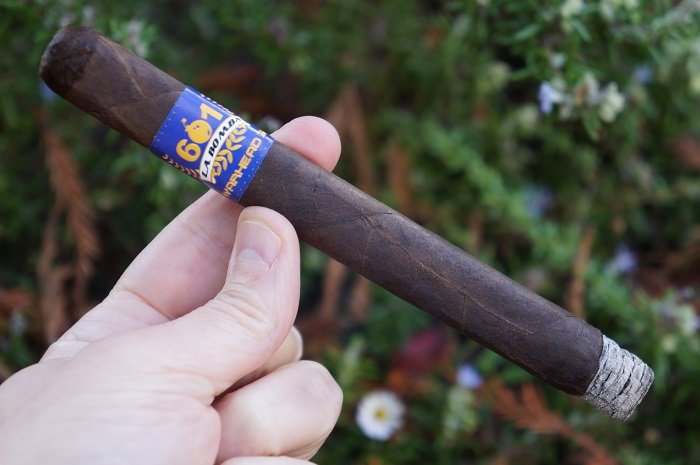 Aaron: As the second third begins, some dry earth joins the profile while the black pepper mellows a bit. At a half inch in, the musty, toasted dark wood is even with the dry earth while the black pepper is a bit behind. The retrohale is now musty, toasted dark wood and dry earth with light black pepper. At an inch and a half in, the black pepper becomes very mellow. As the third comes to a close, it’s musty, toasted dark wood and dry earth up front with mild black pepper in the background and the overall profile is a bit dry. The strength has dropped a bit to slightly above medium.
Seth: I am in the second third now and I am picking up some salted wood notes with those dark cocoa, rich earth and coffee bean qualities. Like before, medium-full in strength and body. It is still tight as a cigar. Not in terms of draw, but more like a young wine.
John: Bread combines with cedar heading into the second third. Mild cedar carries the profile into the post draw. There’s still some tobacco sweetness at medium strength that pushes into the middle of the retrohale as the second third progresses.
Jiunn: The second third softens the pepper delivery. This allows for the chalky cocoa, compacted rich soil and leather to shine through much more. The finish gets a bit too leathery for my taste. Strength and body remains medium-full. 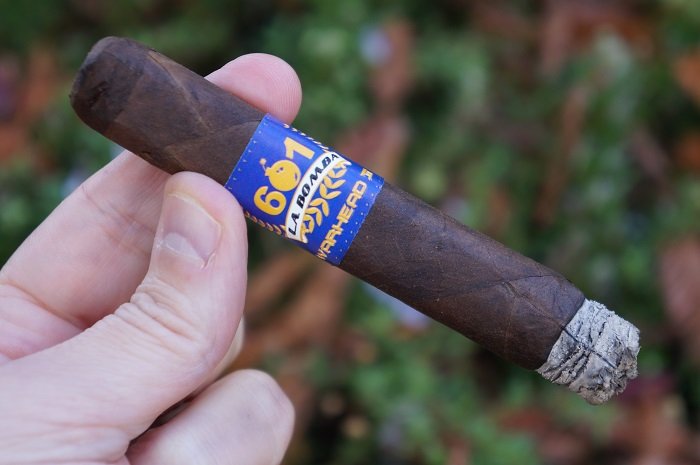 Aaron: The final third is a continuation of the second. At half an inch in, the toast becomes pretty heavy and a light bitterness joins in. The retrohale is now just musty, toasted dark wood and dry earth. At an inch and a quarter, the heavy toast has transitioned to light char. The cigar wraps up with musty, charred dark wood and dry earth with light amounts of black pepper and bitterness. The strength bumped back up to medium-full.
Seth: The final third was very similar to that of the second third. Again, the cigar seems tight and concentrated. Salted wood notes with dark cocoa, rich earth and coffee beans. Medium-full in strength and body.
John: Tobacco sweetness starts off the last third, joined by earth and cedar as the cedar carries through into the post draw. Wood takes up the center of the profile by the halfway point.
Jiunn: The final third stays true to the second third. Still medium-full strength and body with full flavors of chalky cocoa, rich soil and leather. That leather is still the dominant factor on the finish. 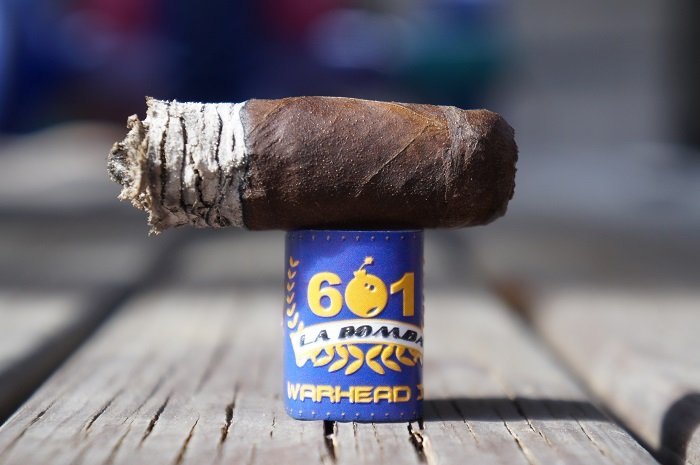 Aaron: The burn was perfectly straight throughout and the ash held on in inch and a quarter increments.
Seth: Solid burn. Nothing to complain about.
John: The burn was straight with the ash initially holding on up to 1-1/2 inches. From that point on, the ash seemed to drop consistently at one inch increments.
Jiunn: Perfect burn performance. Even burn, tight ashes, cool burning temperature and good smoke production. 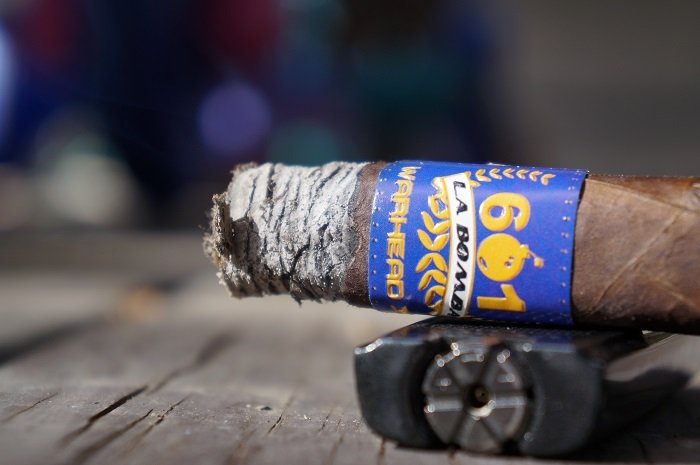 Aaron: The draw was perfect, with just the right amount of resistance that I prefer.
Seth: Really nice draw throughout.
John: The draw is perfect, right in the ideal zone between open and resistant.
Jiunn: Perfect draw as well, giving the ideal resistance and air flow.

Aaron: The cigar began with toasted dark wood and potent black pepper. Some mustiness joined in fairly quickly as the pepper mellowed slightly. Some dry earth joined in at the start of the second third and the profile remained that way until the final third when the toast transitioned to char. Construction was absolutely perfect. The 601 La Bomba Warhead VII started well, but when the dry earth joined at the start of the second third, the profile lost its edge and became quite average and remained that way the rest of the cigar, so it became mundane. This rendition is a bit of a step up from last year for me, but just barely. The cigar really needed to hold on to the profile from the first third to keep it interesting during the long smoking time. I don’t see myself returning to the VII.
Seth: I see this cigar aging well, but I also believe the ring gauge needs to be larger. I don’t have a problem with the press, but I believe they should have produced something with a 52 to 54 ring gauge. I thought there was too much Nicaraguan Broadleaf, and it made the 601 La Bomba Warhead VII one dimensional. It was missing components to take this cigar to a higher level. Solid construction overall though.
John: If it isn’t obvious from the name, the 601 La Bomba Warhead VII is a full flavored, full strength cigar, but the blend of the VII release manages to ramp up to that instead of blasting you on your first few puffs. I found the flavors to be engaging and at times nuanced through the first and second thirds. Construction was excellent and the burn was flawless. There’s no question I will return to the La Bomba Warhead VII again. Total smoking time was 1 hour and 50 minutes exactly.
Jiunn: In many ways, the 601 La Bomba Warhead VII felt like the baby/stepchild of the version VI. While I did enjoy the density of chalky cocoa, I did not particularly enjoy the overtly leathering tones of the cigar. The VI was beefier in both flavors and strength, whereas the VII couldn’t quite catch up to it’s older brother. Sort of like Seth vs his older brother Steph Curry. Still worth a try though.