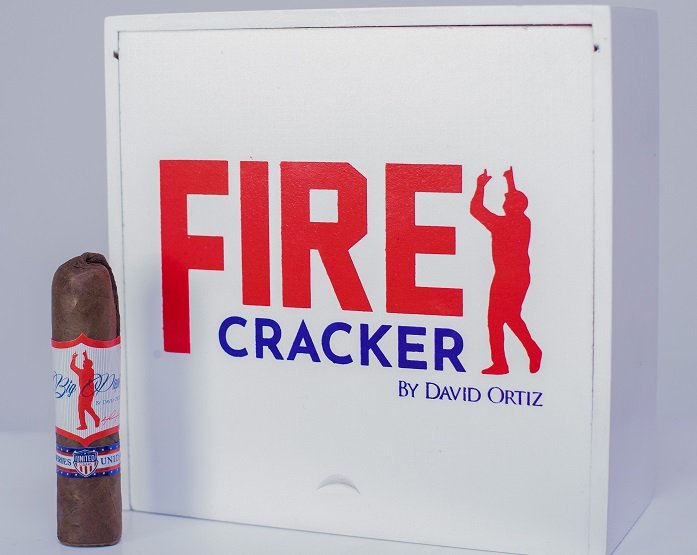 Nashua, NH – The MLB lockout may delay the start of the baseball season, but United Cigars has a different opening in store. The Big Papi Firecracker is set for Firecracker fans to light up for the scheduled MLB Opening Day. Retailers and cigar media will get a first glimpse at the TPE Show this month in Las Vegas, NV. This Special Edition Big Papi Firecracker is a variation of the Slugger line by El Artista with an added boost to the blend from third-generation owner Ram Rodriguez.

“This was a special project that I wanted to be a part of,” said Ram. “This Firecracker is a unique vitola and for a Big Papi Firecracker it had to b special. I wanted tobacco that was grown in the Dominican in the 60’s and Dominican Negrito was that tobacco.”

The Big Papi Firecracker measures 3 ½ x 50 and will be presented in collectible boxes of 20 cigars. The boxes will feature a QR Code for a special ‘Thank you’ video from former MLB 1st Baseman and Designated Hitter David Ortiz. Ortiz played 14 seasons in the majors, finishing his career with ten All-Star appearances, three World Series rings and seven Silver-Slugger Awards. Making the boxes even more collectible will be the 10 MVP mystery boxes with his signature inside and sealed at the factory in Tamboril, Dominican Republic. Production will be limited to 1000 boxes.

Featuring a dark, oily Mexican San Andres wrapper, the Big Papi Firecracker will use Dominican Negrito as its binder. The filler is a blend of Dominican Criollo 98, Nicaraguan Jalapa and PA Broadleaf for base rounding pop. The box has a MSRP of $159.99 or $7.99 a cigar. Contact your United Firecracker Retailers or ask your local cigar lounge for preorders. Big Papi Firecrackers will begin shipping in mid to late March of 2022 and will be featured at this year’s TPE Show in Las Vegas, NV.