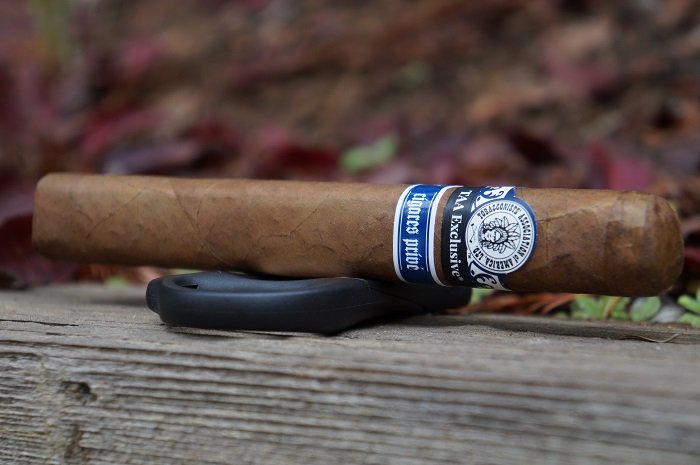 Aaron: The soft rectangle pressed Illusione 2021 TAA Exclusive has a wrapper that is light brown and carries a network of lightly raised veins. The seams are raised in some areas while the caps are well applied. There are two bands, with the primary being the traditional Cigares Prive design and is below the secondary band which is black and white and denotes TAA Exclusive and has the TAA logo. The aroma from the wrapper is dry hay and wood, while the foot brings lightly sweet hay, wood and mild spice. The pre-light draw brings cedar, leather and a mild baking spice, along with a mild spiciness on my lips.
Seth: Finished with a nice soft press, the Illusione 2021 TAA Exclusive is firm in hand. The cigar features a lovely Colorado Maduro wrapper that is marbled in coloring. Small veins noticeable throughout. Oily and smooth in texture. Aromas of rich earth, tobacco, cocoa and stone fruit.
John: The Illusione 2021 TAA Exclusive brings a lot to the table for the pre-light experience. The cigar is cellophaned, and has a UPC sticker that tears in half when the cellophane is opened. The cigar is double banded, with the unique reversal of TAA Exclusive as the primary band, and the company as the secondary band. As an additional artisanal complication, the cigar is box pressed. Aromas from the wrapper included sweet raisin, bread and fresh wood. Aromas from the foot included sweet tobacco, honey and wood.
Jiunn: The Illusione 2021 TAA Exclusive has a semi-oily, natural shoe leather brown look. Veins are decently pressed, seams tight, bunch and roll even and head well wrapped. Aromas from the wrapper tell barnyard and cedar. Aromas from the foot give barnyard, cedar, assertive white pepper spice and plums. Cold draw reveals hay, cedar and plums. 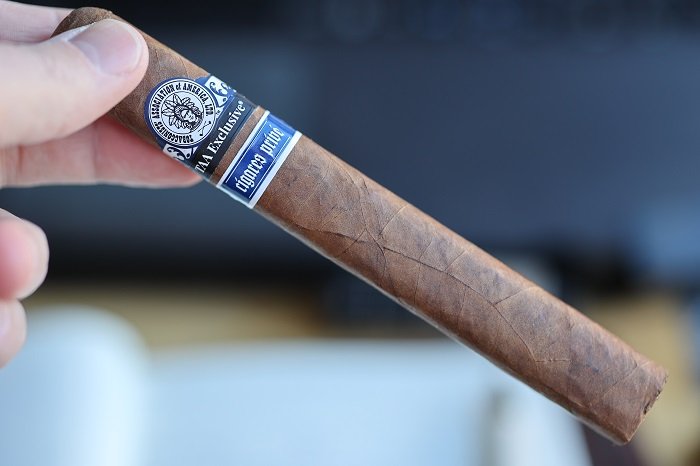 Aaron: The cigar begins with a lightly charred cedar and slightly sharp black pepper. At a half inch in, the profile has become a bit fuller and slightly sharper in addition to a light mustiness joining the profile. At three quarters of an inch in, the char has transitioned to a heavy toast. The retrohale is musty, toasted cedar with some sharp black pepper a bit behind. At an inch and a quarter, some dry earth joins the profile. The third wraps up with musty, toasted cedar up front, slightly sharp black pepper a bit behind and some dry earth in the background. The strength was right at medium.
Seth: The cigar begins with some rich earth and tobacco notes. There are some Asian spice qualities present as well, and I am getting earth, coffee and cocoa on the finish. Very filling and balanced. Medium in strength and body.
John: My initial flavor impressions were bread, wood, baking spices and a sweet creamy wood on the finish. The baking spices immediately intensifying on the retrohale to medium strength. As it progressed, lingering pepper sits on the post draw fairly aggressively on the front and sides of my tongue. As the profile settled in, cotton candy sweetness comes in on the retrohale. The pepper moves down to light strength by the 35 minute mark. Approaching the halfway point, nutmeg is in the middle of the profile. In the bottom half, graham cracker mixes in with the baking spices and wood.
Jiunn: One word comes to mind about the first third, sharp. A heavy dose of minerals, baking spices and dry red pepper dominates the profile. There’s actually plenty of softer notes too such as ginger snap cookies, nuts, bread and general meatiness. But the sharper notes drastically blanket them. Retrohaling is rough, as it scorches the nostrils with sharp minerals and baking spices. The finish is long and lingering, providing a mixture of nuts, dry red pepper spice and cedar. Strength is medium-full, and body is medium. 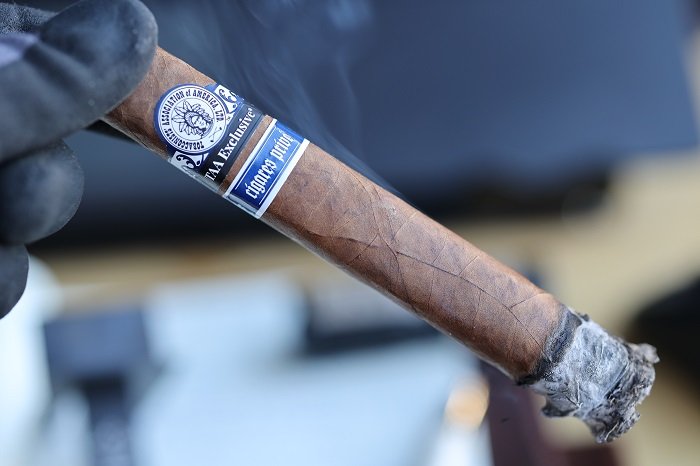 Aaron: As the second third begins, the sharpness of the black pepper has gone away. At a half inch in, the musty, toasted cedar and dry earth are now even, with the black pepper a bit behind. The retrohale is now toasted cedar and dry earth with light black pepper. As the third comes to a close, the profile is now toasted cedar and dry earth up front with light black pepper and mustiness in the background. The strength remained at medium.
Seth: The second third delivers a similar profile to that of the first third. I am picking up rich earth and cocoa notes that are paired with damp wood and tobacco qualities. There are faint coffee notes present on the finish, and like the first third is smoking at a medium level for strength and body.
John: The second third leads off with mild bread, wood, baking spices, graham cracker and a dry wood finish. Some earth joins the finish as the second third settles in. By the halfway point, the profile has become quite flat, mostly wood forward, as the flavors that started it off have fallen away.
Jiunn: The second third calms down on the sharpness. But at the same time, I’m also getting less of the softer notes. The flavor package now consists of (less sharper) minerals, baking spices and dry red pepper spice. Strength and body remains medium-full and medium, respectively. 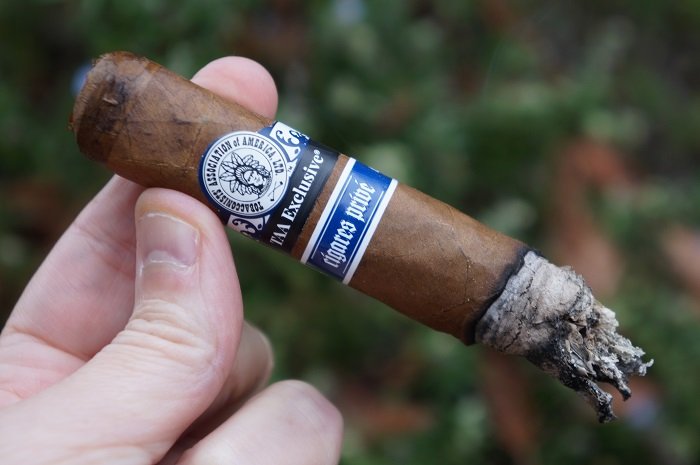 Aaron: The final third continues where the second left off. At a half inch in, the mustiness picks back up to be up front with the toasted cedar. The retrohale is now musty, toasted cedar and dry earth. At three quarters of an inch in, a light vegetal note joins the profile. The cigar wraps up with musty, toasted cedar and dry earth even up front with mild black pepper and vegetal notes in the background. The strength remained at medium.
Seth: The final third was fairly in line with that of the second third and I was getting rich earth and cocoa notes. There were some damp wood notes present on the finish, and they are paired with some coffee bean notes. Medium in strength and body.
John: The last third was led by medium strength earth and cedar, which both carried into the post draw finish. The earth fell back, to light plus strength as it progressed. By the halfway point, the earth has moved into the center of the profile.
Jiunn: The final third picks up a vegetal note to the existing flavors of less sharp minerals, baking spices and dry red pepper spice. The strength although still medium-full, is felt a bit more (body still medium). 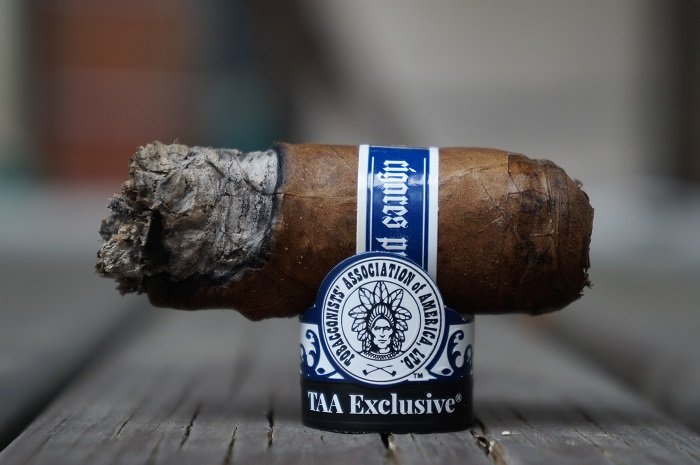 Aaron: The burn was fairly wavy throughout as nearly half of the wrapper didn’t want to burn and two touch-ups were required to keep everything in line.
Seth: Nice burn throughout. That was a surprise.
John: The burn had some minor issue with unevenness at times, a touch-up in the first third and a touch-up in the second third.
Jiunn: A few touch ups due to quite a wavy burn were the minuses. Aside from that, no issues. 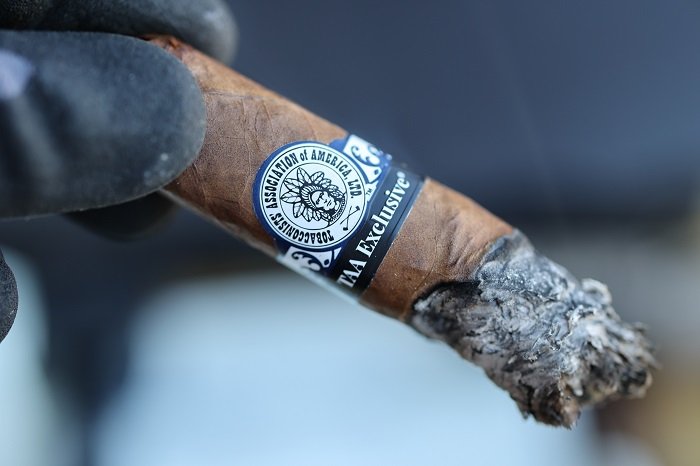 Aaron: The cigar began with lightly charred cedar and sharp black pepper, settling down at about three quarters of an inch in. The char transitioned to toast as some mustiness and dry earth joined. The cigar maintained this profile until the final third when a vegetal note joined in. The Illusione 2021 TAA Exclusive started fairly out of balance with the char and sharp black pepper, but once it did find some balance, it was an average profile of toasted cedar, black pepper, dry earth and mustiness. This was a disappointment, mostly just for the brand, but then you add the fact that is a TAA release and the high price point, it just doesn’t check any of the boxes. Unless my experience was far off from the others, I can’t see coming back to this cigar.
Seth: I am torn on this Illusione 2021 TAA Exclusive. Is it a good cigar for TAA? Yes. Is it a good cigar for illusione? No. Is it better than the illusione PCA? Yes. Is it a good cigar overall? It’s okay. My question for Illusione and Dion is why are you even bothering with these PCA and TAA releases? You don’t need to bring your brand down to their level. If this cigar wasn’t a $15.00 TAA release, but an $8 price friendly Illusione, I would buy it. I am positive that this could be a lower priced Illusione release too. Construction was right in line with a lot of Illusione releases. Flavors delivered were close, but not as good as I would get on Illusione releases like the ~88~ and mj12. Just go buy one of those two cigars. You will save money and get a better cigar. Maybe I wouldn’t buy this cigar if it was $8.
John: The Illusione 2021 TAA Exclusive had a promising start with a complex and nuanced medley of flavors that you can often get from Illusione blends. The second third couldn’t maintain the same level of complexity, and the last third was largely earth driven and monotonous. The draw was perfect, and the burn required two touch-up interventions. Unfortunately, this is another release in a long line of TAA cigars that are starting to get lumped together in a pile of disappointment. There are so many brilliant Illusione offerings that I would find myself reaching for instead of the 2021 TAA. Total smoking time was 2 hours and 16 minutes.
Jiunn: Before smoking the Illusione 2021 TAA Exclusive, I thought, this is it. I will finally proclaim a TAA cigar worth buying. This should be easy peasy. But after proofing three samples over the last two weeks, I’m still in search of a TAA cigar worth purchasing. Sharp and unbalanced are the two words to sum up my experience. While some of the samples stayed sharp longer (into the second and/or last third), all samples were no doubt sharp and unbalanced. This isn’t necessarily terrible, as cigars like this can age to a wonderfully balanced cigar with proper age. But as is, it is not ready and not recommended.