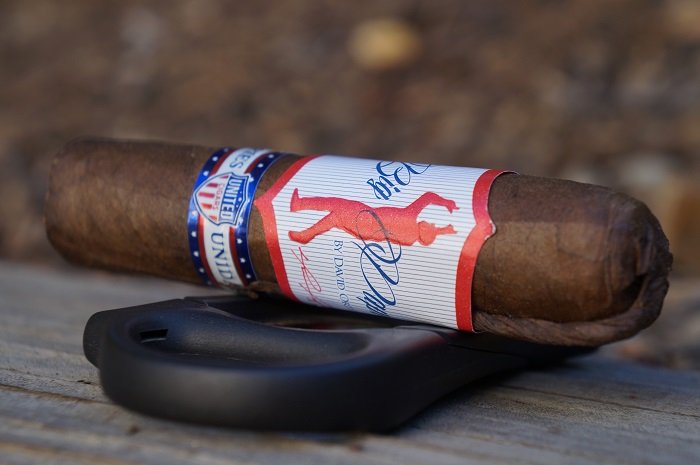 Aaron: The wrapper on the El Artista Big Papi Firecracker is dark brown and has some lightly raised veins present. The seams are smooth and the head is finished with a twisted tail that is tucked under the primary band and goes about halfway down the cigar. The primary band is the traditional design for the line and the secondary band is the red, white and blue United Cigars band found on many of their offerings. The aroma from the wrapper is a mix of cocoa, earth and mild spice while the foot brings wood, stone fruit sweetness and mild spice. The pre-light draw brings spicy cedar along with a mild spiciness on my lips.
Seth: The El Artista Big Papi Firecracker is a great looking petit robusto. Nice maduro coloring. Dark chocolate coloring that pops against the bands. Firm throughout. Aromas of espresso beans, cocoa, earth and damp wood.
John: The El Artista Big Papi Firecracker comes in cellophane and does not have a UPC code. Given the size of the cigar, the double bands take up a lot of real estate on the wrapper. The primary band is large and indicates Big Papi, the secondary band indicates ‘Series Unidas’ with the United Cigars logo. The cigar has the requisite ‘fuse cap’ that the firecracker style cigars have. For aromas, I was detecting old barn wood and mild earth from the wrapper. Out of the foot, all I could pick up was sweet hay.
Jiunn: The El Artista Big Papi Firecracker has a pale and dull Mexican San Andres wrapper. Veins are well pressed, seams tight, bunch and roll eve, and the head unraveled upon taking the cellophane off. Aromas from the wrapper tell of a slight barnyard and a hint of campfire. Aromas from the foot give hay, cedar and pungent white pepper spice. Cold draws give hints of hay and cedar. 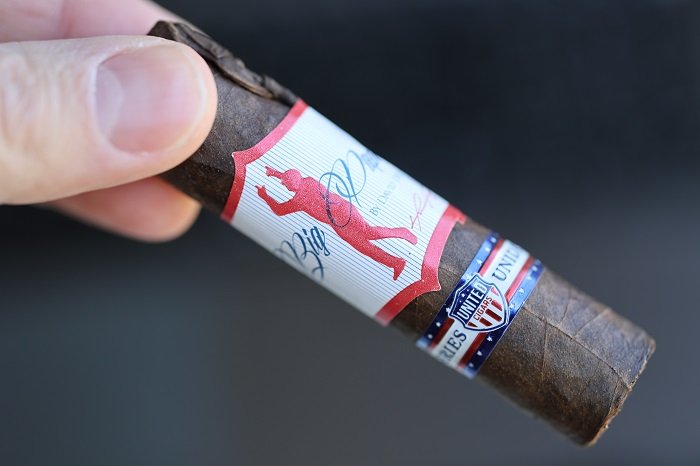 Aaron: The cigar begins with toasted oak and a cinnamon forward baking spice. At a quarter inch in, some mustiness joins the profile as the baking spice mellows. The retrohale is toasted oak up front, then mustiness, with a light baking spice. At three quarters of an inch in, the baking spice picks back up. As the third comes to a close, the profile is musty, toasted oak up front with baking spice a bit behind. The strength was right at medium.
Seth: The first third started out with some nice espresso notes that were paired with some peppery spice and rich cocoa qualities. Medium-full in strength and body.
John: The first third opens with baking spices and earth through the retrohale. Some pepper develops on the post draw after just a couple of puffs. Creaminess develops not long after as citrus sweetness comes into the retrohale. The pepper moves up to medium-full to full very quickly. As the cigar progresses, earth develops at the end of the draw into the post draw. Pepper recedes in strength to medium by the halfway mark.
Jiunn: The first third shows hay, dehydrated vegetables, stale cedar and a hint of black/red pepper spice. Retrohaling is great, because it doesn’t have any of the staleness in cedar and dried vegetables. It’s full of dry red pepper spice and cedar. The finish has a lingering stale cedar. Strength is medium-full, and body is medium. 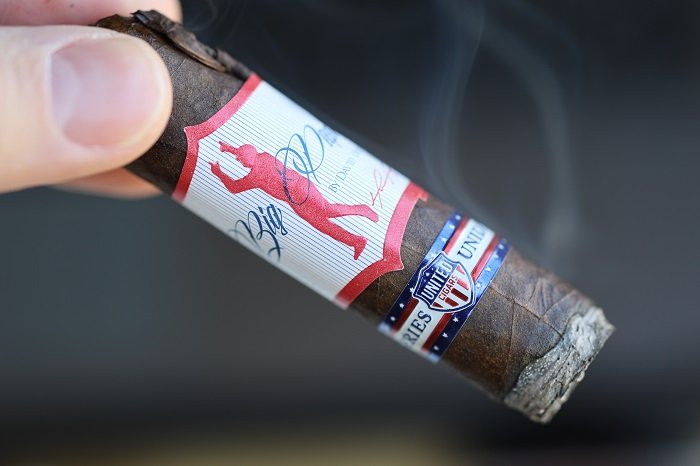 Aaron: The second third begins with the baking spice mellowing a bit. The retrohale remains musty, toasted oak and light baking spice. As the third comes to a close, the toast level has picked up a bit while the baking spice is still a bit behind. The strength has moved up to slightly above medium.
Seth: The cigar was so short that the second third saw a lot going on. Major transitioning from first to final third. From lovely cocoa and espresso notes to dry earth and mineral qualities. Very little time to smooth itself out. Medium-full in strength and body.
John: The strong earth from the first third gives way to wood, baking spices and a defined nutmeg and earth combination into the post draw. Creaminess returns to the retrohale as the cigar reaches the halfway point. Some sharp wood is present at the end of the draw in the bottom half.
Jiunn: The final two thirds had the same experience. There is now a bitterness to the already staleness of dried vegetables and cedar. So all in all, the profile is bitter, stale and peppery. Strength and body is unchanged at medium-full and medium, respectively. 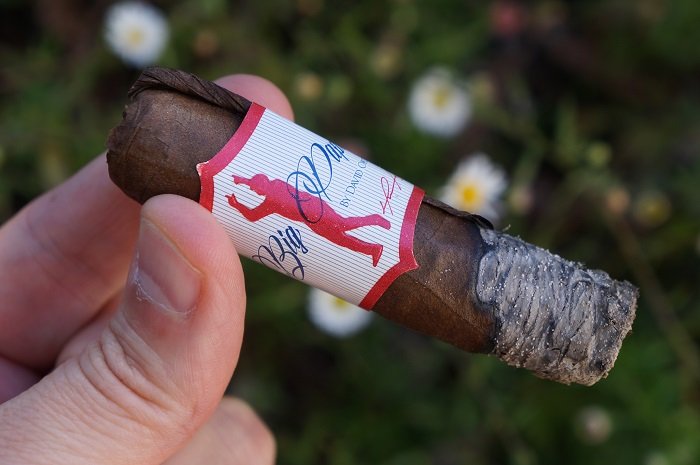 Aaron: As the final third begins, the toast level is heavy and the baking spice is a bit sharp. The retrohale remains musty, toasted oak and light baking spice. The cigar wraps up with the same musty and heavily toasted oak with baking spice that is a bit sharp. The strength remained at slightly above medium.
Seth: I am picking up some faint peppery spice notes with dry earth, espresso beans and mineral qualities. Medium-full in strength and body.
John: Earth and wood combine into the last third. Some light plus strength pepper accents each puff. The cigar is heating up by the halfway mark giving some mintiness to the draw.
Jiunn: The final two thirds had the same experience. There is now a bitterness to the already staleness of dried vegetables and cedar. So all in all, the profile is bitter, stale and peppery. Strength and body is unchanged at medium-full and medium, respectively. 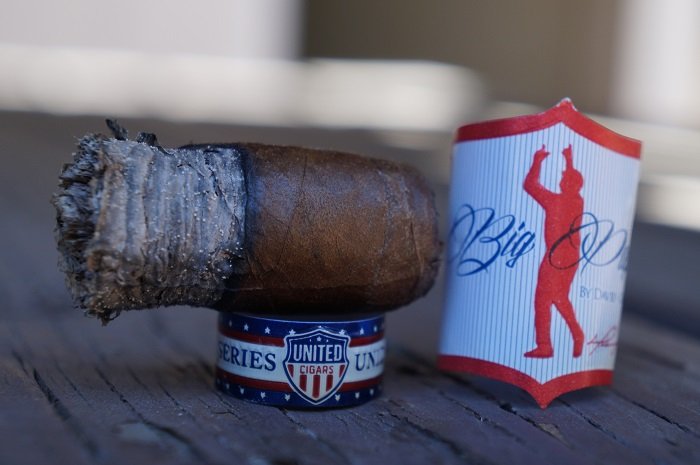 Aaron: The burn was a little wavy at times, but never needed any attention. The ash held on to just before the end of the second third and then again until the end.
Seth: No time to mess up.
John: The burn started straight but went out at the halfway mark. It’s possible I was smoking too slowly, but regardless a re-light was required.
Jiunn: The burn performance needs some major work. Starting from the second third, the smoke became very hot (temperature). This led to shorter draws and quite possibly was why I tasted so much bitterness. 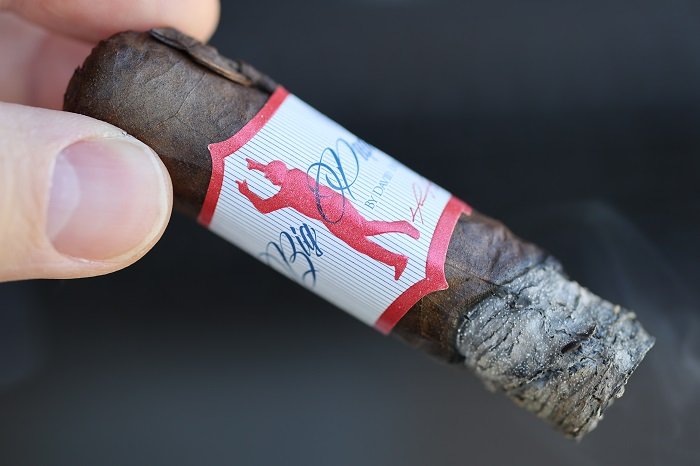 Aaron: The draw was a bit tighter than I prefer, but didn’t cause any issues with the smoking experience.
Seth: One puff and I was done.
John: The draw was perfect, right in the ideal zone between open and resistant.
Jiunn: Pretty good draw performance. Slightly loose, but it’s a very minor mark down.

Aaron: The cigar began with toasted oak and a cinnamon forward baking spice. Some mustiness joined in fairly quickly. The cigar maintained the same flavor components the rest of the way, just changing a bit in fullness at times. The El Artista Big Papi Firecracker had an average and very linear flavor profile throughout, which could be expected with its short length. To me, this size doesn’t present the best of what the line can offer and I’d prefer one of the regular production vitolas when it comes to this line. Fun to smoke it in this size, but I don’t see myself returning.
Seth: This El Artista Big Papi Firecracker needed a pinch runner. It had no problem getting on first base, but it couldn’t get home. There are some good bones to this cigar, but I think it needs less Dominican tobacco. It needs some more kick, and I don’t think the strong Dominican tobacco can deliver the flavors with the strength. Nice first third, but nothing special in the second and final third. Loved the size, finish, etc.
John: The El Artista Big Papi Firecracker was a fairly flat experience for me overall, largely delivering on flavors of earth and pepper with some baking spices and creaminess occasionally adding complexity. Pleasant at times, but not dynamic enough to move it into the good category for me. The draw was perfect, and the cigar went out once requiring a re-light. Total smoking time was 1 hour and 8 minutes.
Jiunn: This El Artista Big Papi Firecracker was overall average and honestly a bit of a dud. Whenever a profile is full of staleness and harshness, it will lend to be a cigar not worthwhile. These flavors combined with a temperature hot burn is added salt to the open wound. Not a cigar for me.