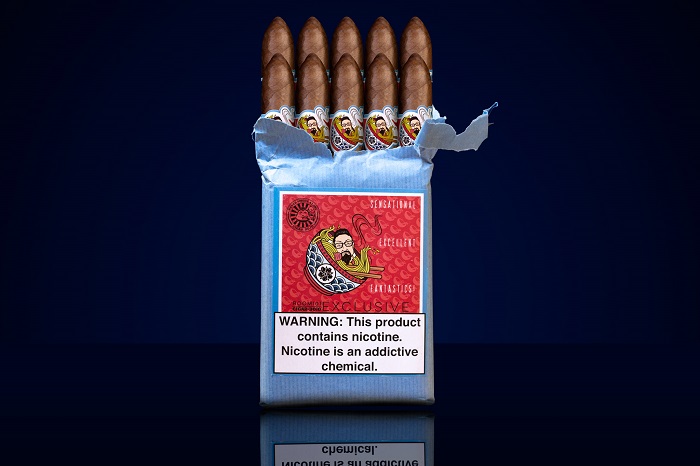 Friday, September 14, 2018 — Denver, CO – Introducing the [untitled] Room101 Cigar Dojo Collaboration—one of the most unorthodox cigar collaborations from Cigar Dojo (aka “The Dojo”) to date.

On a special impromptu episode of Cigar Dojo’s Smoke Night LIVE in February 2016, Matt Booth—founder of Room101—offered up the most unusual cigar contest the Dojo had ever seen. For this contest, Matt decided that the first Dojo member to post a picture of his/her feet dunked in a bowl of ramen noodles would receive a full box of Room101 cigars. Throughout the course of the show, multiple “Dojonites” took on the task, flooding the Cigar Dojo app with the unsightly ramen-feet visual. Over the years, the concept has become a running joke between Cigar Dojo and Room101, culminating with this, the noodles-inspired Room101 Cigar Dojo Collaboration.

Eric Guttormson, owner of Cigar Dojo, commented, “Everyone knows that Matt Booth marches to the beat of his own drummer, but we’re also aware that Matt knows how to put together an amazing cigar, which has been proven many times over. The “limp noodle” will most certainly remind you of some of the best Room101 blends from the past, with its dark and juicy flavor profile.”

Since Room101’s re-entry into the premium cigar market in 2017, the company has worked primarily out of the Tabacalera William Ventura factory in the Dominican Republic. This new style has been a favorite for Cigar Dojo, with Room101 and Cigar Dojo working closely with the Ventura family for the [untitled] blend.

The cigar’s wrapper is a specially fermented Mexican San Andrés leaf, showing a lighter-than-average Colorado Rosado shade. For the interior, a Sumatra binder has been secured over 100% Cuban-seed fillers, including Criollo ’98, Corojo ’99, and HVA leaves. The cigars were then rolled in a 5½” x 52 belicoso vitola and left to age for a minimum of six months. The resulting smoking experience offers a healthy balance between the maduro-heavy formats of pre-2017 Room101 cigars and the nuanced style of the brand’s modern offerings. The cigars deliver a medium-plus body, loaded with flavors of molasses, red and black pepper, rich hardwoods, and lingering sweet notes of vanilla and stone fruit.

“I am overwhelmed with delight to finally participate in a collaborative effort with the ‘Cigar Dojonites,’” stated Matt Booth, founder of Room101. “This is a phenomenal cigar to smoke while Jay Walking or waiting on your car during an oil change or any other minor procedure. I am eager to have this product pollinate the Dojo community and to see people enjoying something that was such a pleasure to make.“

For this limited edition project, Cigar Dojo has partnered with online retailer JR Cigar for an exclusive sale. The cigars will be priced at $10 ($99.95 per bundle), however, there will be a Dojo member discount of 10% during the cigar’s first week of sales ($89.95 per bundle). Matt Booth of Room101 has given the cigars his unique spin, displaying bright and vibrant, noodles-inspired graphics across each bundle and cigar band. The finished product is a fitting tribute to the Cigar Dojo community and craft-minded smokers with a taste for the unconventional.