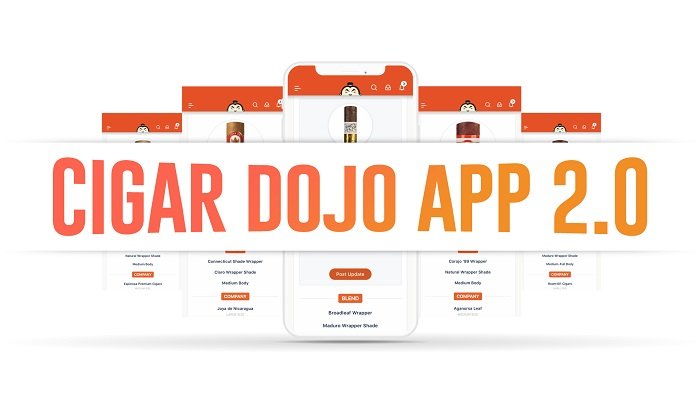 DENVER, CO (Friday, September 11, 2020) —— The Cigar Dojo app was first launched in the fall of 2012, since making itself known as the world’s first and largest social cigar app. After eight years, The Dojo, as it has become known, has undergone its first major refresh, opening up completely new functionality never before seen in the world of premium cigars.

Cigar Dojo has faced its fair share of challenges over the years, including copycat imitators, minimal customizability, and most notably, a lack of updates due to anti-tobacco guidelines from mobile app stores. The latter led to the removal of nearly all cigar-based apps. And while Cigar Dojo was eventually approved to remain in Google and Apple’s app stores, updates became virtually impossible, eventually leading to the development of Cigar Dojo 2.0—a reimagined version of The Dojo that has been completely redesigned from the ground up.

Cigar Dojo has now moved outside of the confinement of app store platforms, being built as a Progressive Web App (PWA), allowing all users with a web browser to access the app through both mobile and desktop platforms—available at dojoverse.com.

Cigar Dojo 2.0 was developed from scratch over the course of more than a year, allowing for new features that are completely unique within the cigar industry, such as the ability to check into cigars and earn points and badges that reflect a user’s unique smoking preferences.
Other features, such as groups, inline comments, and GIF responses, are long-requested features that users have come to expect from modern platforms such as Facebook, with many cigar enthusiasts looking for a new home following the platform’s multiple threats of banning tobacco-related groups and discussion in recent years.

– Badges: every cigar checkin is tied to each cigar’s unique attributes, allowing for badge awards for smoking behavior, including smoking a certain number of maduro-wrapped cigars, full-bodied cigars, Nicaraguan cigars, affordable cigars, and much more.

– Cigars: browse through a searchable list of all cigars and brands.
View stats on each cigar, including its overall rating, your personal rating, how many times your friends have smoked it, the cigar’s blend makeup, ongoing conversation on each cigar, and more.

– Brands: cigar brand pages take into account every cigar made by the brand and show users an overall brand rating based on the combined score of their entire portfolio. Brands are even given a ranking, making it possible to see who is the most (and least) favorable brands in the industry. View the entire catalogue of each brand by their cigars’ name or ranking.

– Leaderboard: view the most active users and track your current ranking—sorted by day, week, month, and all-time rankings.

– Groups: users can join and create their own groups, allowing for group privacy levels such as public, private, and secret.

– Events: find and check into cigar events, add events your your device’s calendar, and participate in ongoing comment threads for each unique event.

– Places: find and check into cigar-friendly locations, get directions, and participate in ongoing comment threads for each unique location.

– Timeline: reply to comments within posts, edit your activity, comment with GIFs.

There are many more features and easter eggs to uncover within the new Dojo, as well as added features to come on a much more regular and frequent basis. Cigar Dojo was always envisioned as a fun and inviting place for cigar enthusiasts to fellowship and hone their cigar-smoking skills—now they’ll have the belt to prove it!