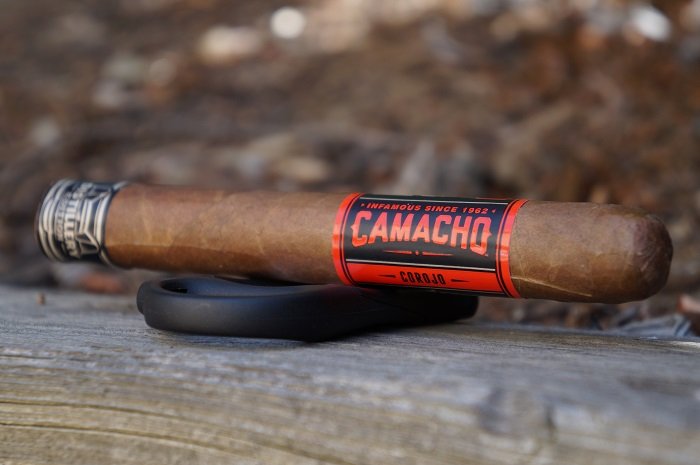 The wrapper on the Camacho Distillery Edition Corojo Toro is on the lighter side of medium brown and has a network of slightly raised veins that are outlined in a lighter brown and brings a bit of a turtle shell effect. The seams are very smooth and really only detectable due to vein placement. The head is finished off with a well applied triple cap. There are two bands, with the primary being the typical format for the brand and adding the Distillery Edition component. This Corojo offering has the color combination of red and black. The foot band is black and gray and denotes Distillery Edition. The aroma from the wrapper is sweet cedar, and the foot brings a general wood note along with a lingering and subtle syrupy sweetness. The pre-light draw brings an airy and sweet dry oak with a bit of spiciness on my lips and tongue. 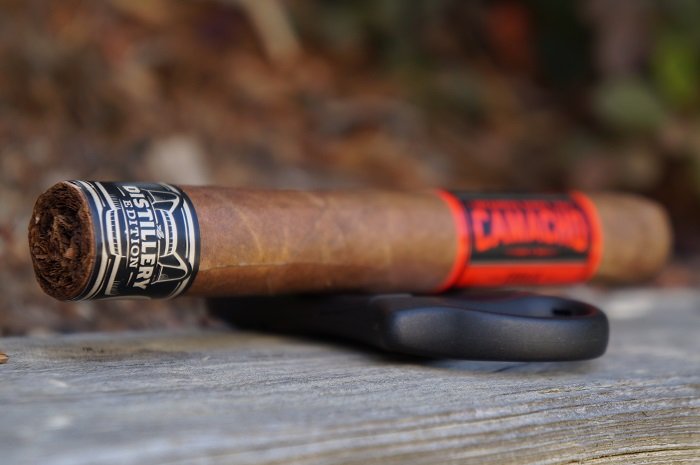 Finished with a faded brown wrapper, the Camacho Distillery Edition Corojo Toro has a nice Natural coloring. There are some veins throughout, but for the most part small in size. The cigar is finished with a nice cap and is rolled well and firm throughout. I am picking up an aroma of soft spices, oak, earth and tobacco on the wrapper with an aroma of spices, fruits, cedar and tobacco on the foot. 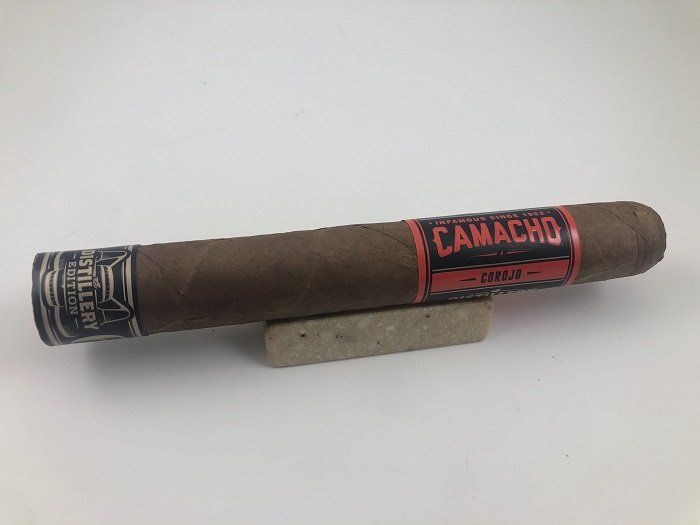 The Camacho Distillery Edition Corojo Toro is double banded, with a foot band that indicates Barrel Aged Finish 6 months, and a primary Camacho Corojo band. The wrapper on the cigar is smooth with veins pressed throughout. Aromas from the cigar include sweet raisin, cedar undertones and some stone fruit. There is an intense bourbon sweetness from the foot. 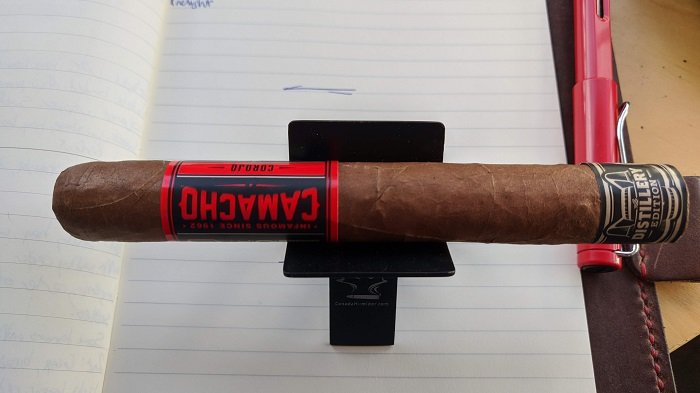 The Camacho Distillery Edition Corojo Toro has an overall Colorado maduro wrapper shade. Veins are roughly pressed, seams tight, bunch and roll even without much give and head with a multi-wrap. Wrapper aromas consist of hay, cedar and generic brown spirit syrup sweetness. Aromas from the foot tell the same as the wrapper with added dry red pepper spice. Cold draw reveals cedar, hay and a touch of corn syrup. 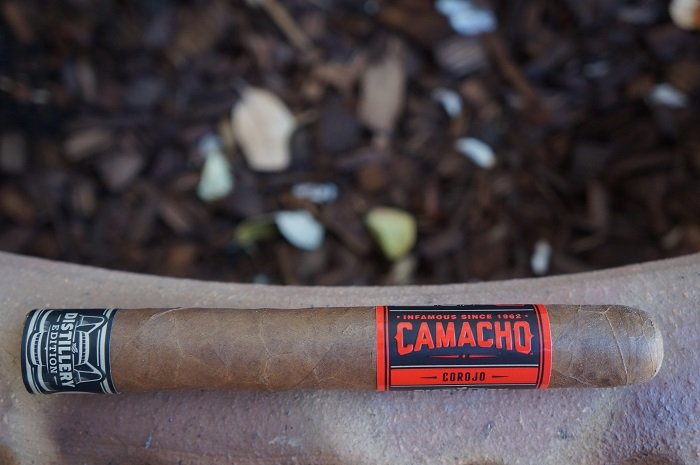 The cigar begins with spicy and slightly charred cedar while there is some oak that peeks out from the background on some draws. At a half inch in, the spiciness is quite full. The retrohale is spicy cedar with light mustiness. At an inch and a quarter, the spice mellows a bit and the charred cedar is now charred oak. As the third comes to a close, the charred oak and spiciness are even and the profile is slightly drying. The strength in this third was medium-full. 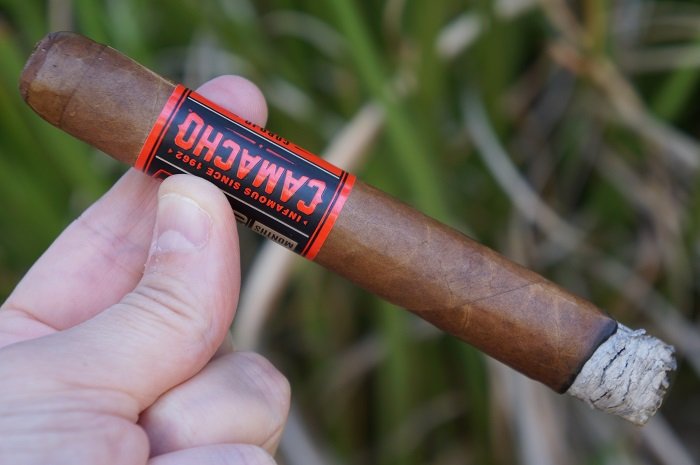 The first third opens up by delivering some sharp spice notes and it is paired with this citrus herbal quality. I am getting some oak notes on top of that and it has a creamy and tobacco quality finish. I would classify the cigar as being medium to medium-full in body and strength, and the flavors are there as well. 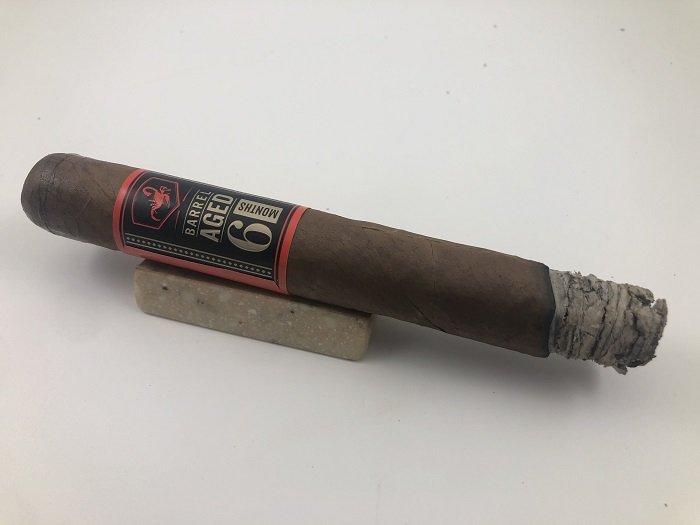 A thick spicy smoke opens up the first third, cedar finishing the draw and into the post draw. Baking spices and red pepper flake sit on the center of my tongue, tongue tip and lips. The profile is medium-full right out of the gate. By the 15 minute mark, cocoa sweetness past light plus in the middle of the profile as spices fall to medium strength. Some time later, light plus cedar lingers on the post draw between draws. 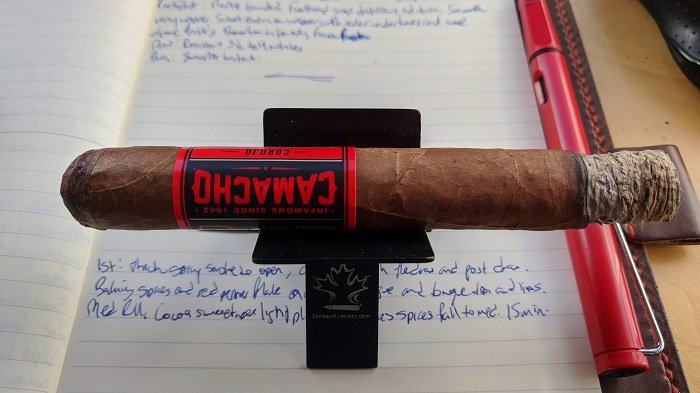 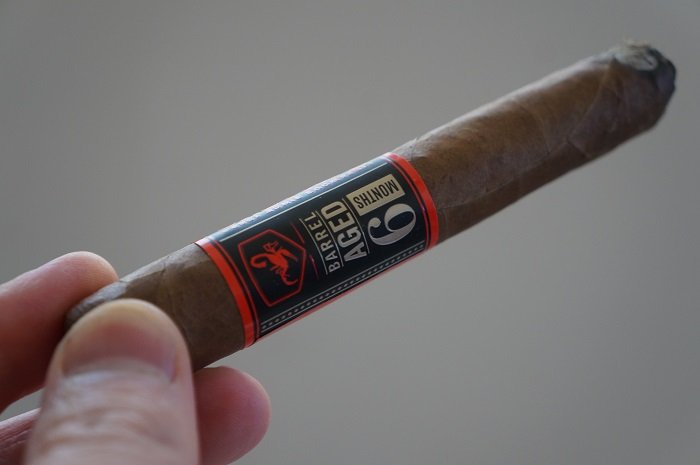 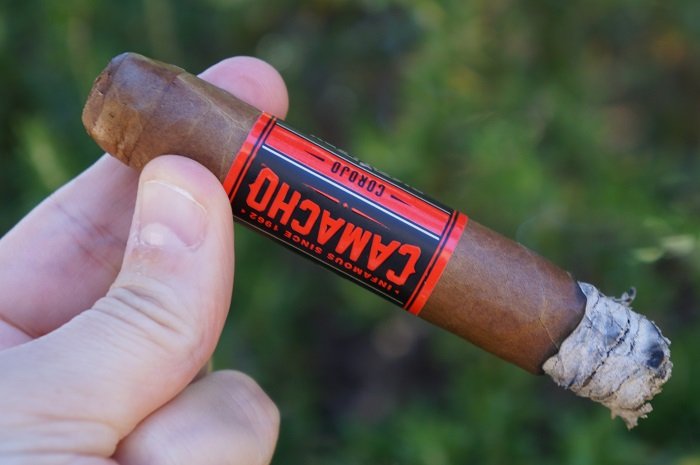 The second third shows some transitioning as a cigar and it delivers a flavor profile that has some lemon and herbal qualities with touches of red pepper spice. I am getting subtle cream notes as well, and it is paired with this oak profile on the finish. The cigar is smoking just above medium in this third, and that goes for body, strength and flavors. 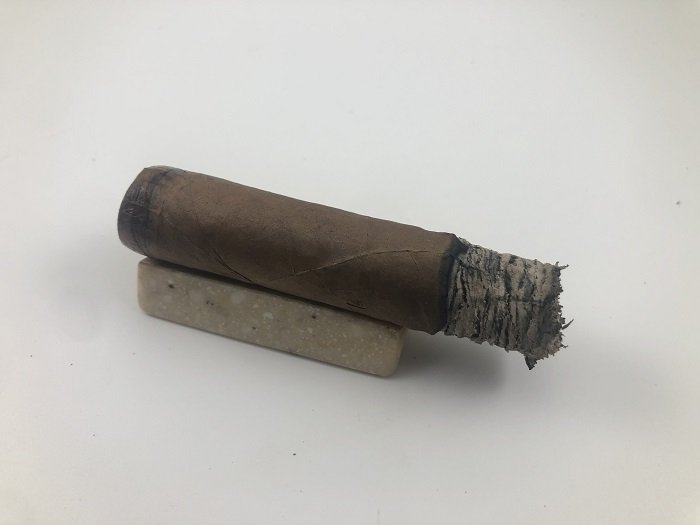 Dry cedar that lingers into the post draw to begin the second third. Sweet hay and cedar settle into the middle of the profile for the remainder of the third. 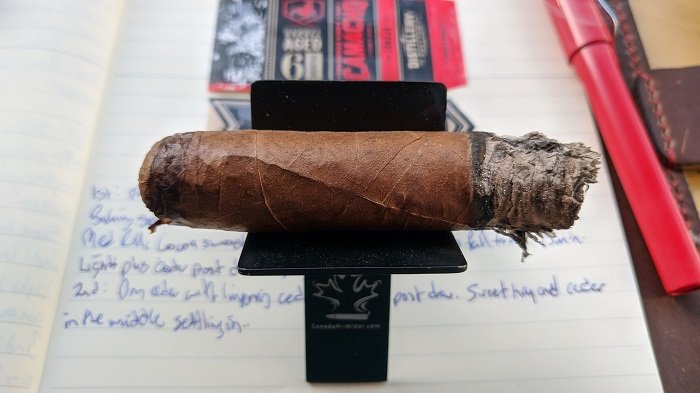 The second third flavor profile gets a boost. All the same flavors level up a notch, especially the bourbon-like sweetness of corn syrup. The cedar finish is lengthened with also some baking spices added. Strength and body remains medium. 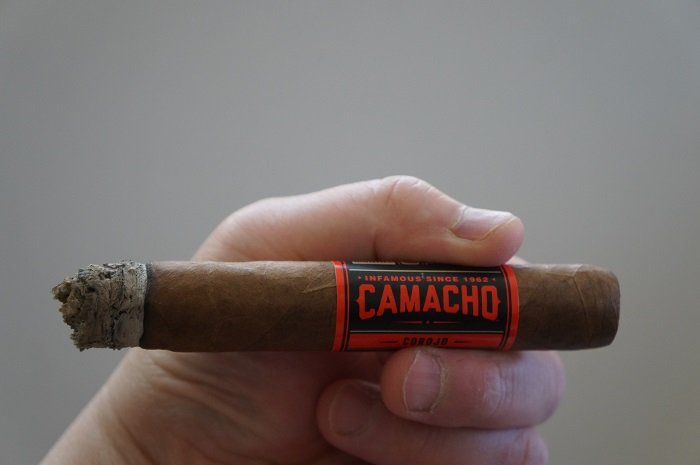 The final third continues on with the dry profile of musty and charred oak. At a half inch in, the char picks up a bit and a light bitterness joins the profile. The retrohale remains musty and charred oak. At an inch in, the char becomes very light while the oak becomes very dry but has an immense amount of depth. As the cigar comes to a close, the profile is musty dry oak, light char and bitterness. The strength in this third remained at slightly above medium. 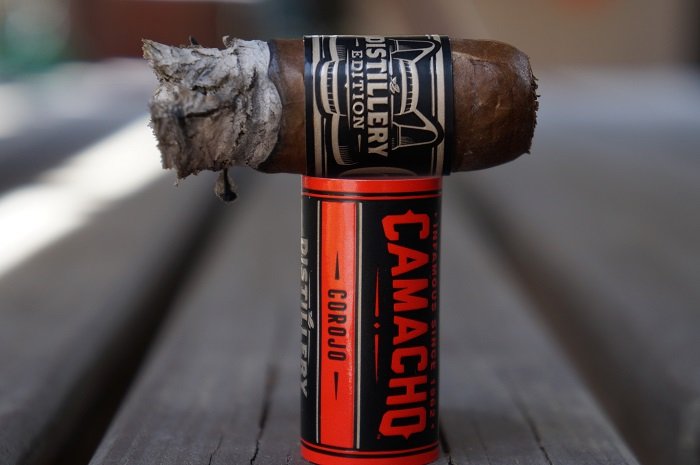 The final third shows a lot of the characteristics that are present in the second third, but the cream notes have faded off. I am getting that lemon and herbal quality and it is paired with woody and earthy qualities. The finish is that of peppery spices, and it has this white pepper quality at the end. Like before, the cigar is smoking at a level between medium and medium-full. 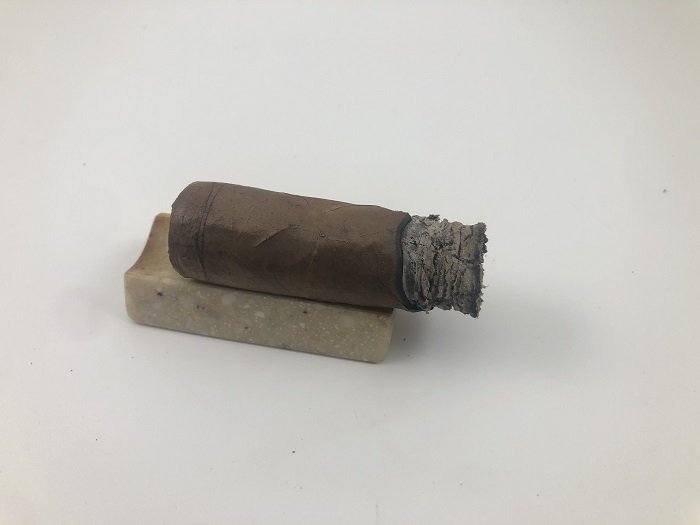 Dry cedar carries the flavors into the the final third. Light cocoa and cedar define the middle of the profile with some dusty wood on the post draw. 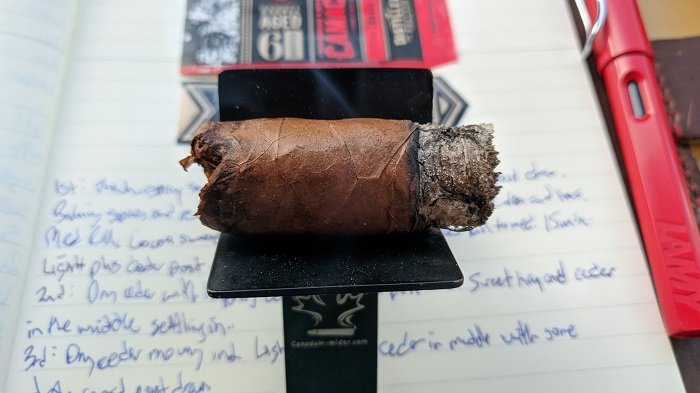 The final third tones down the intensity of flavors more in line with the first third. The profile is geared more towards cedar and light baking spices as compared to the corn syrup sweetness. Strength and body finishes medium. 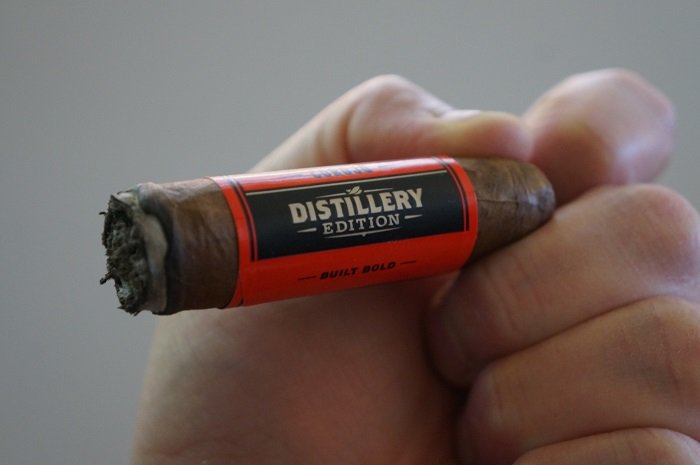 The burn line was slightly wavy, but never needed any attention. The ash held on in inch and a half increments. 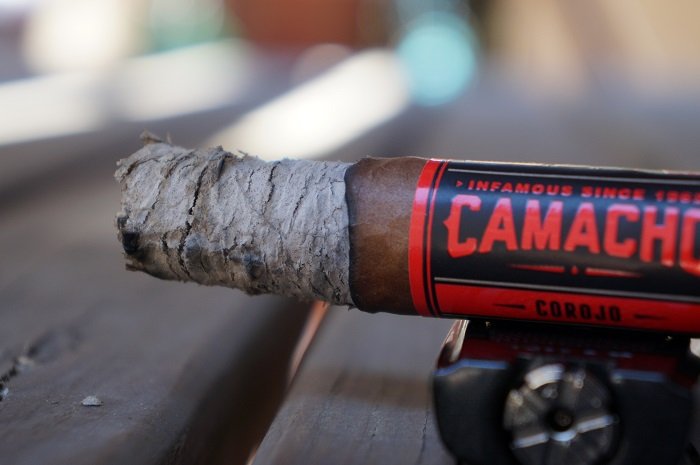 The burn on the cigar was very good throughout. Nice construction of the cigar. 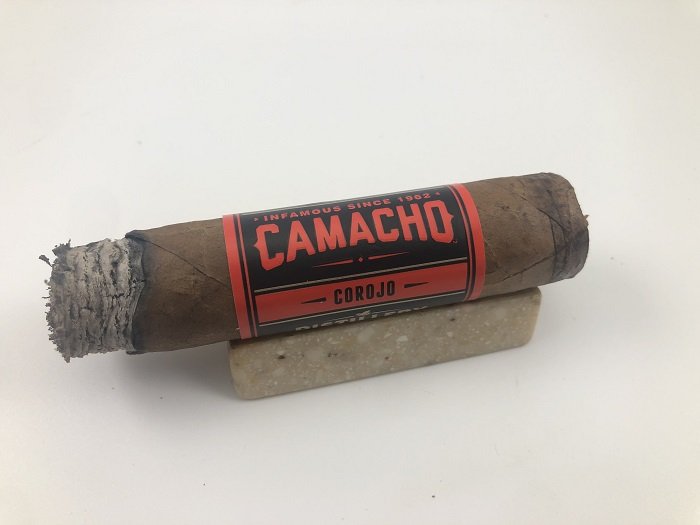 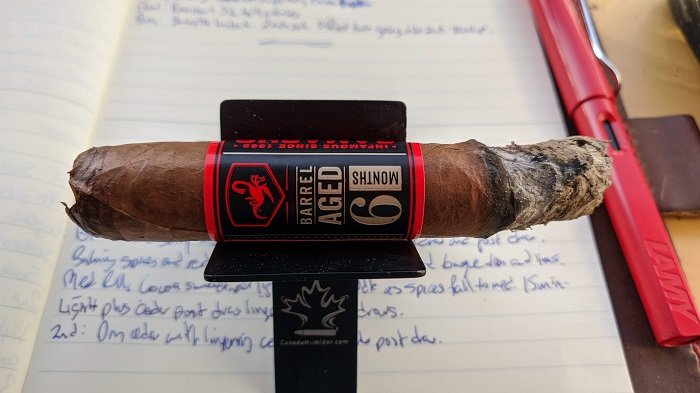 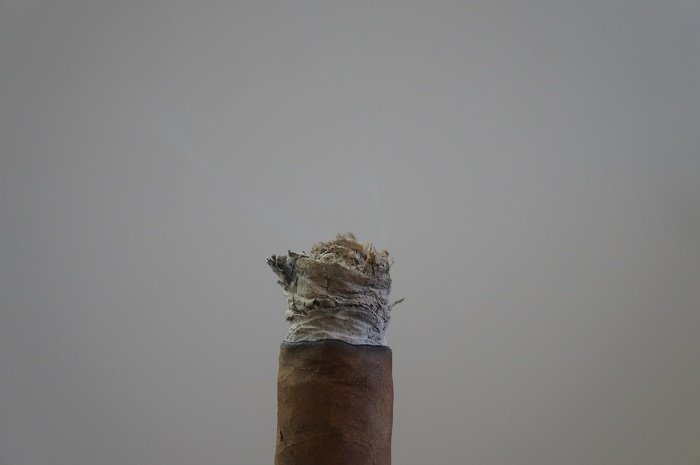 The cigar began with spicy and slightly charred cedar. Halfway through the first third, the charred cedar became charred oak. The second third saw some mustiness join in and the profile became fairly dry. The final third saw the char bump up and then become very light while some bitterness joined in and the profile became even drier. Construction was very good and strength was slightly above medium most of the way. The Camacho Distillery Edition Corojo Toro started with a punch of spice, but mellowed and was a fairly average experience until the final third when some bitterness joined in and the profile was quite dry. I didn’t detect any barrel aging other than the oak note which I can’t say it’s attributed to the aging. This Corojo version didn’t capture the same enhancement that the Connecticut did and I doubt I’ll be returning to this blend.

This was a decent cigar and now I have to smoke the entire Distillery collection for Camacho. I believe the Connecticut offering to be superior, but this was nice. I prefer the traditional Corojo over this offering, but it was nice to see the changes present with the tobacco used. I personally don’t care for the flavor profile overall, it is not my cup of tea, but nonetheless it is a good cigar and I believe some would enjoy this offering of the Camacho Corojo. I like that the Connecticut has some Dominican tobacco in the blend, and it would have been interesting if they went away from being all Honduran Corojo and see what was delivered. In my opinion, just stick with the classic Camacho Corojo over this Camacho Distillery Edition Corojo Toro.

The Camacho Distillery Edition Corojo Toro has some nice flavors in the first third, but presents a fairly average flavor profile through the second and last thirds. Flavors included baking spices, cedar, red pepper flake, cocoa and sweet hay. The burn was very good but the draw presented significant resistance through the smoking experience. I would try the Distillery Edition Corojo again, but overall I preferred the Connecticut version. Total smoking time was a relaxed 2 hours and 21 minutes.

The draw was perfect, striking the right balance of resistance and air flow.

Having smoked through numerous renditions of whisk(e)y and beer aged cigars and subsequently being let down, the Camacho Distillery Edition Corojo Toro had much to prove. While I don’t think it was necessarily a bad cigar, the influence of the bourbon aged binder leaf/leaves did not pull through enough. My expectation of bourbon aged should give me quintessential bourbon flavors such as oak, sweetness in caramel, brown sugar, vanilla. Instead, the cigar gave me some subtleties in corn syrup like sweetness. Like most of these types of cigars, the influence was too subdued and hard reaching. As such, this was another miss in my book.