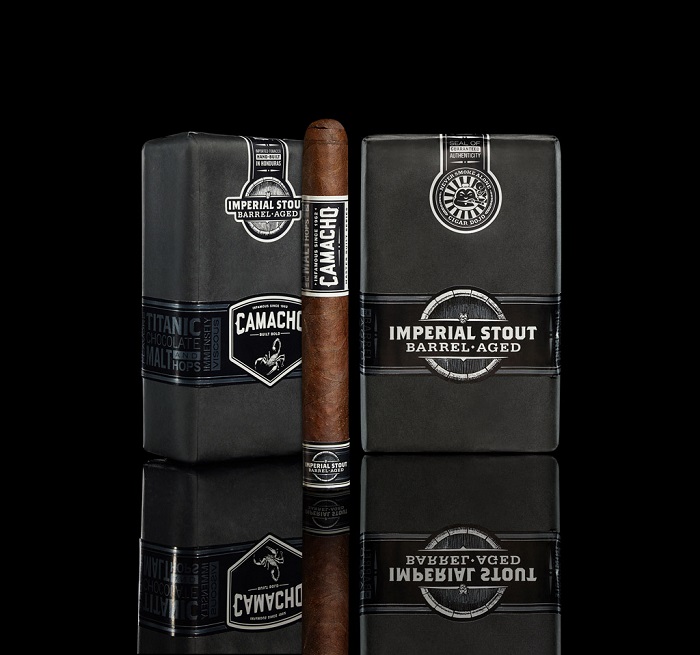 In 2015, fresh off the heels of Camacho’s ground-breaking introduction of the American Barrel-Aged cigar—where Camacho mastered the art of barrel-aging tobaccos in used, American whiskey barrels—the brand partnered with Cigar Dojo to highlight the unique characteristics from barrels of a different variety. With Cigar Dojo being based out of one of the top craft beer meccas in the country (Denver), the decision became obvious on how these two brands would collaborate.

For Cigar Dojo, the quest then became centered around the best, most quintessential local brew to represent Cigar Dojo, Colorado craft beer, and the Cigar Dojo community’s demanding palates. This choice materialized in the form of Ten FIDY by Oskar Blues, which is brewed out of Longmont, Colorado and has long been a favorite among craft beer/cigar enthusiasts on the Dojo app. But while the intentions were noble, the approach had been flawed from the start—as Ten FIDY is simply a high gravity imperial stout, lacking the barrel-aged requirement for the project. On a whim, Eric (aka Master Sensei), owner of Cigar Dojo, contacted Oskar Blues in hopes that the brewery had been experimenting with barrel-aging the Ten FIDY recipe. Not only had they been experimenting, but Oskar Blues had recently finished their first mass effort at canning Barrel Aged Ten FIDY for the company’s first “official” release of the beer! Thirty barrels were used to age Ten FIDY, and Camacho/Cigar Dojo managed to secure four such barrels after the beer had been dumped. While multiple barrel types were used to bring the eventual beer to market, the four barrels selected for this project were from Heaven Hill Distilleries, located in Bardstown, Kentucky and the producer of other Dojo favorites—such as Larceny, Elijah Craig, and Parker’s Heritage. 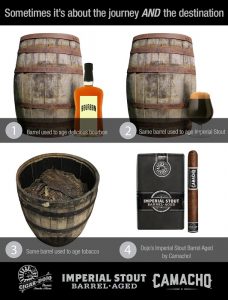 Camacho then shipped these four barrels to their facilities in Danlí, Honduras, where Camacho’s prized Original Corojo tobaccos were meticulously aged and rotated within the beer and whiskey-soaked barrels for a minimum of six months. Here, the barrels began to impart their unique characteristics of roasted malt, charred oak, and sweetness of the original whiskey to the Honduran tobacco leaves. This process differs from other beer barrel-aged projects, as the tobaccos are allowed to ferment inside the barrels prior to being rolled; making for a more traditional, sophisticated, and complex experience when compared to cigars that have been rolled prior to barrel-aging.

The barrel-aged Original Corojo leaves were then paired with Brazilian and Dominican maduro leaves in the cigar’s filler, an Original Corojo maduro binder, and a San Andrés maduro wrapper; allowing the unique characteristics to shine through without becoming too overpowering.

Cigar Dojo Imperial Stout Barrel-Aged by Camacho kicks off with a punchy spice, which is later rounded out by loads of roasted malts, dark chocolate, and a touch of sweet vanilla/bourbon buzz in the retrohale.

“Without question the Cigar Dojo/Camacho Imperial Stout Barrel-Aged is the most complex project we have ever been involved with,” commented Eric Guttormson, owner of Cigar Dojo. “For our seventh special cigar release, we wanted to stretch the boundaries of what could be done with a small-batch, craft cigar. The flavor that the tobacco has developed from the barrel that was once used for bourbon and then Ten FIDY Imperial Stout is truly a work of art.”

This all-maduro blend is based on Camacho’s world-renowned Triple Maduro cigar, making slight adjustments to accommodate the added attributes imparted from the barrel-aging of the Original Corojo leaves in the cigar’s filler. This makes for a whole new spin on a fan-favorite classic! In addition, Imperial Stout Barrel-Aged marks the first time that Camacho’s Triple Maduro has been introduced in a Toro vitola.

“We could not be more excited to share the results of this project with everyone. Imperial Stout Barrel-Aged is something we’ve been working on for more than a year and the result is so unique. We took our Triple Maduro blend as the base, and aged the Original Corojo Maduro fillers in spent bourbon barrels, which then held Ten FIDY Imperial Stout. The taste experience is one of a kind,” said Dylan Austin, Vice President of Marketing for Davidoff of Geneva USA.

Imperial Stout Barrel-Aged is not only a unique collaboration between Cigar Dojo and Camacho, but Smoke Inn Cigars as well. As such, the cigars will be sold exclusively through Smoke Inn’s online store and Florida-based brick & mortar locations.

A very limited allotment of 4,000 cigars (400 bundles of 10 cigars) have been rolled for the first batch of this project, with the potential for additional cigars in the future.

As Smoke Inn became known for their unorthodox “late night” release parties years ago, Imperial Stout Barrel-Aged will bring the party back—with the limited edition project going up for sale during the evening of June 30, 2017—allowing for a party-like atmosphere for the cigar’s launch! Cigar enthusiasts are encouraged to share their experiences live on the Cigar Dojo app during the sale, embracing Cigar Dojo’s motto of “Never Smoke Alone.”

“Bourbon, Beer, and Cigars, what’s not to love about the new Dojo Imperial Stout Barrel Aged made by Camacho Cigars?! Smoke Inn couldn’t be more excited to be a part of this unique project that will never be replicated,“ commented Abe Dababneh, proprietor of Smoke Inn Cigars.

Camacho is the world’s leading brand of bold cigars, representing the concept of unleashing unmistakable and intense experiences. Infamous since 1962, the brand has become a sanctuary for the powerful, elemental being who seeks to fill their lives with unapologetic good times. A combination of rich heritage, product excellence and a never surrender attitude has enabled Camacho to grow into a brand globally recognized as the standard of full-frontal flavor and full- frontal lifestyle.

Cigar Dojo is the most-used cigar app in the world. Operating as the largest social cigar app, Cigar Dojo boasts a strong community that is focused on positivity and a fun, inviting atmosphere. Other features of Cigar Dojo include a shop locator, cigar events calendar, the popular cigar ranking system Cigar Wars, and more. Along with its emphasis on social smoking, Cigar Dojo also maintains one of the largest, most-recognized cigar review blogs of the same name. Cigar Dojo’s previous releases include the Undercrown DOGMA, Sensei’s Sensational Sarsaparilla, and Whiskey Rebellion 1795—all selling out shortly after release.

Cigar Dojo can be downloaded for free on Apple’s App Store or the Google Play store. More information can be found at www.cigardojo.com.

Smoke Inn Cigars provides the most fun, easy, and affordable cigar-buying process for cigar enthusiasts of all walks of life.

Through a continuously growing collection of brick & mortar locations, as well as the best, hand-curated selection of craft cigars on the Smoke Inn website, cigar hobbyists will find exactly what they’re looking for throughout their unique cigar-smoking journey. Smoke Inn helped to pioneer the craze of small-batch cigar releases based on the mindset seen in the microbrew culture—these “Microblends” and other exclusives play a large role in our unwavering passion for premium cigars.

More information can be found at www.smokeinn.com.