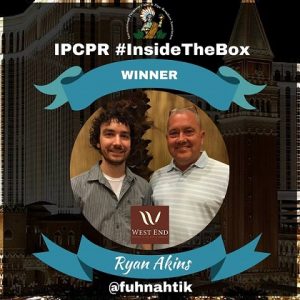 Interview with Ryan Akins – IPCPR 2016 Inside the Box Winner

This year, the International Premium Cigar & Pipe Retailers Association (IPCPR) put together a contest called Inside The Box in which consumers could vie for a chance to attend the annual industry trade show. The trade show is not open to the public, so this would give a consumer (and a guest) an opportunity to attend this event designed for manufacturers, retailers and media. The contestants were to submit an essay on why the would like to attend the annual trade show and the IPCPR staff would choose a winner from the submissions.

The winner was Ryan Akins, and he chose to bring his father with him as his guest. We reached out to Ryan to congratulate him and asked him if we could sit down with him to find out more about his contest submission and his experience attending the trade show. Please watch the video below for our interview with Ryan.

Interview with Ryan Akins – IPCPR 2016 Inside the Box Winner