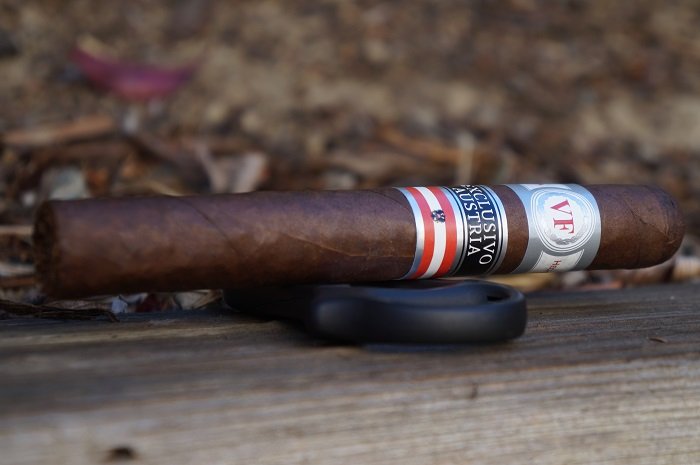 Aaron: The wrapper on the VegaFina Vindobona Exclusivo Austria is medium brown and has a network of lightly raised veins and fine tooth. The seams are decently raised while the caps are well applied and the head is finished with a tightly wound pigtail. There are two bands, with the primary being the traditional design for the brand while the secondary is black, silver, red and white and denotes Exclusivo Austria. The aroma from the wrapper is a very subtle general wood note while the foot brings a musty wood. The pre-light draw brings lightly musty cedar along with a mild spiciness on my lips.
Seth: Finished with a great pigtail cap, the VegaFina Vindobona Exclusivo Austria has a lovely chocolate colored wrapper. Natural to Maduro in coloring. The wrapper sports few veins, ranging from small to medium in size, and is oily and silky in texture. The cigar has a rich aroma of spices, fruit, leather, earth and tobacco. Beautiful packaging.

Aaron: The cigar begins with a full delivery of lightly musty and lightly toasted cedar along with dry earth and mild baking spice. At a half inch in, the mustiness has departed while the toast level has increased. The retrohale is toasted cedar along with light mustiness and light dry earth. At an inch and a quarter, the mustiness returns to the profile. As the third comes to a close, the profile is musty, toasted cedar up front, dry earth in the middle and light baking spice in the background. The strength is slightly below medium.
Seth: Lack of flavors being delivered. I picked up some mocha, sweet spice and oak notes, but there was not much else. Truly lacking. Medium in strength and body. Very little smoke produced. 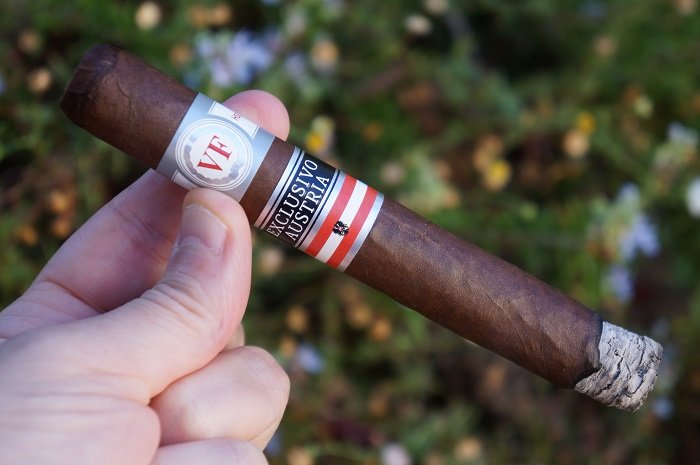 Aaron: As the second third begins, the baking spice is quite subtle as the dry earth picks up and the overall profile is now a bit dry. The retrohale remains toasted cedar along with light mustiness and light dry earth. At an inch and a quarter, the dry earth is even with the musty, toasted cedar. The strength in this third bumped up to medium.
Seth: The second third delivers a flavor profile that is predominately spices with herbal and hay notes. I am getting faint oak and mocha notes. Medium to medium-full in strength and body. 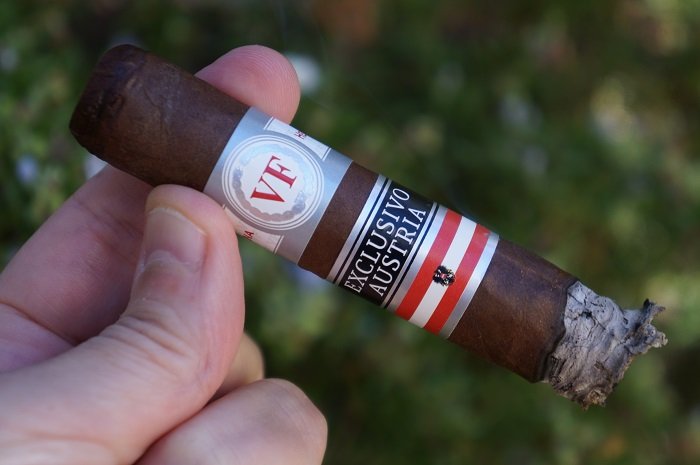 Aaron: The final third begins with the toast becoming a light char and the baking spice leaving the profile. The retrohale is musty, toasted cedar and dry earth. The cigar wraps up with musty, charred cedar and dry earth. The strength in this third bumped up to slightly above medium.
Seth: I have reached the final third and I have had enough of the cigar. There is nothing being delivered. The few flavors of oak, mocha, herbs and spices were too faint, and they fade away quickly. Just smoke. Like before, medium to medium-full in strength and body. 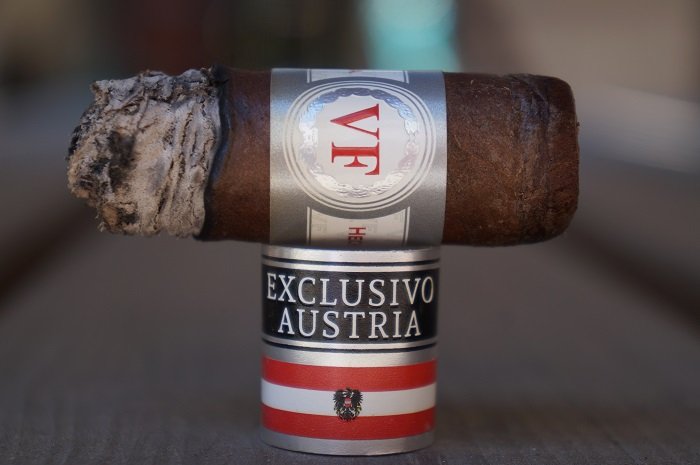 Aaron: The burn was slightly wavy throughout, but never needed any attention. The ash held on through each third.
Seth: I did not need to touch up the cigar throughout the smoke. 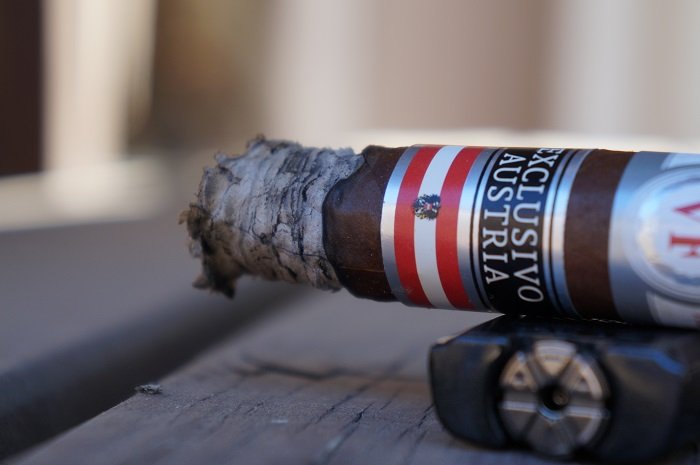 Aaron: The draw was a bit tighter than I prefer, but didn’t cause any issues with the smoking experience.
Seth: Despite the cigar buring well, there was a fluctuation in the draw throughout. At times snug, and other times loose.

Aaron: The profile was focused around musty, toasted cedar, dry earth and baking spice. The final third saw the toast transition to char and the baking spice drop out. Overall, the VegaFina Vindobona Exclusivo Austria had an average flavor profile that was fairly boring. No real transitions until the final third and provided nothing to maintain my attention. This is about in line with the recent non-U.S. releases from the brand and is a bit of a bummer for an exclusive cigar. Not something I’d track down to smoke more of.
Seth: There are cigars far worse than this, but when you look at this as a limited release for Austria with the packaging and even name involved, this cigar is a total bust. It is like they had this great idea, put a lot of time into the development of the cigar’s story and packaging, and then didn’t even bother with a great blend or a well-constructed cigar. It is too painful to continue talking about how disappointing the VegaFina Vindobona Exclusivo Austria is and was to smoke. I almost did not want to review this cigar, but when I saw there were other regional/national release for the brand, I knew we had to do this and every following release.