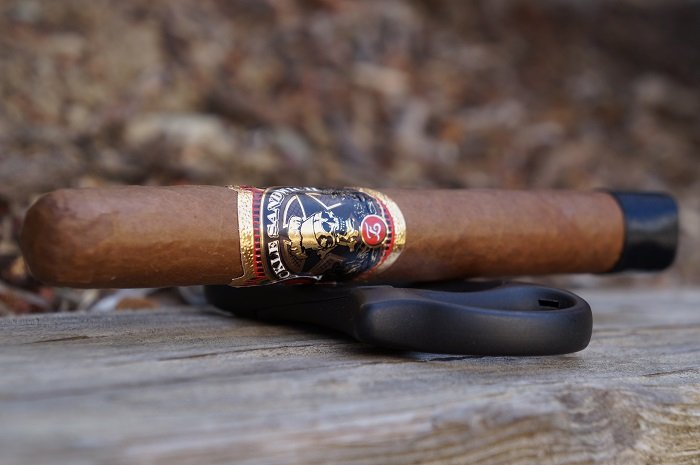 Aaron: The wrapper on the Espinosa Knuckle Sandwich Habano Corona Gorda R is between light and medium brown and has a thick but well pressed vein running down one side. The seams are raised in a few places while the caps are well applied. There are two bands, with the primary being black, gold, red and white with a skull wearing a chef’s hat. The foot band is a black ribbon. The aroma from the wrapper is a light mix of wood and earth while the foot brings cedar and light ammonia. The pre-light draw brings a musty, aged cedar.
Seth: Rolled very well, the Espinosa Knuckle Sandwich Habano Corona Gorda R is firm throughout and has a wrapper that has a fine grit texture. There are few veins present, and those present are small in size. The cap is applied well, and the cigar has a coloring of dark Natural. A solid chocolate brown coloring. Aromas of strong spices, manure and dark chocolate. Some cherry qualities as well.
John: The Espinosa Knuckle Sandwich Habano Corona Gorda R comes in cellophane, and has a UPC sticker with an integrated tear point so the UPC remains intact when the cellophane is opened. The cigar has a main band, along with a secondary black ribbon foot band. Aromas from the cigar included mossy earth, chocolate and a light-plus barn wood. There is sweet wood, bread and tobacco from the foot, along with an underlying light mustiness.
Jiunn: The Espinosa Knuckle Sandwich Habano Corona Gorda R has an even shade of Colorado. Veins are well pressed, seams tight, bunch and roll even and head well wrapped. Aromas from the wrapper tell abundant barnyard and sweet, roasted nuts. Aromas from the foot give the same but with added white pepper spice. Cold draws reveal hay, cedar and nuts. 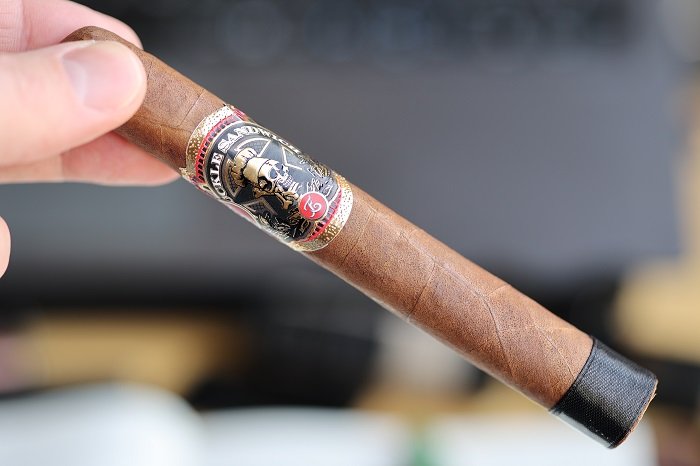 Aaron: The cigar begins with toasted and smoky oak and a potent black pepper. At a half inch in, the black pepper has settled down a bit. At three quarters of an inch in, some dry earth joins the profile. The retrohale is toasted oak with a light dry earth and then a rush of zinging black pepper finishes it off. At an inch and a quarter, the dry earth and black pepper are right behind the toasted and slightly smoky oak. As the third comes to a close, the toasted oak and dry earth are even up front with the black pepper a bit behind. The strength in this third was slightly above medium.
Seth: The first third starts out with a lot of red and white pepper notes that are paired with this sourdough flavor profile. I am picking up some cedar qualities with that, and there is some tobacco, nuts and dry earth on the finish. Medium-full in strength and body.
John: Sweet baking spices open the first third, along with cocoa and wood. Surprisingly, the retrohale is more wood forward than the main draw. Baking spices move up to full strength after just a few puffs. Some of that mossy mustiness from the aroma starts to show up in the post draw as it settles in. The baking spice along with pepper falls back to medium or medium-plus by the one inch mark, balanced with creaminess. There is a syrupy sweetness taking hold of the center moving towards the halfway point. Wood starts to come through with sweetness through the finish here. Baking spice intensity settles at medium-plus with cocoa accents by the end of the first third.
Jiunn: From first draw, the flavors are deep in dry red pepper spice and sweet roasted nuts. The spice is dialed back roughly around the inch mark. Retrohaling brings that spice right back, being strong in the same dry red pepper spice with earthiness in cedar wood. The finish is long and lingering, with the spice sitting on the rear palate (without irritation) and cedar. Strength is medium-full, body is medium. 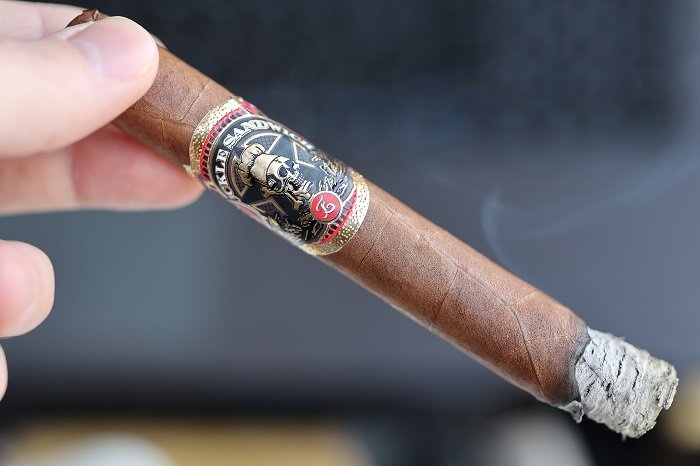 Aaron: As the second third begins, the black pepper has mellowed slightly and become a bit dull. At a half inch in, the dry earth now has a slight lead in the profile. The retrohale is now an even mix of dry earth and toasted oak with a faint black pepper. As the third comes to a close, the dry earth remains slightly ahead of the toasted oak with the black pepper a bit further behind. The strength remains slightly above medium.
Seth: The second third delivers a flavor profile of white and red pepper, and it is paired with those cedar and tobacco notes. The sourdough qualities are present on the finish, and it has that nutty quality as well. Like before, medium-full in strength and body.
John: Creamy sweetness gets the second third going, bringing with it bread, and medium strength baking spices, all of which carry into the post draw. There isn’t much in the way of flavor evolution as the three components all seem to find a balance and remain consistent through the second third.
Jiunn: The second third is still sweet and spicy like the first third, but adds a dimension of some type of hay/dehydrated vegetables that I can’t quite put my finger on. Strength and body remains medium-full and medium, respectively. 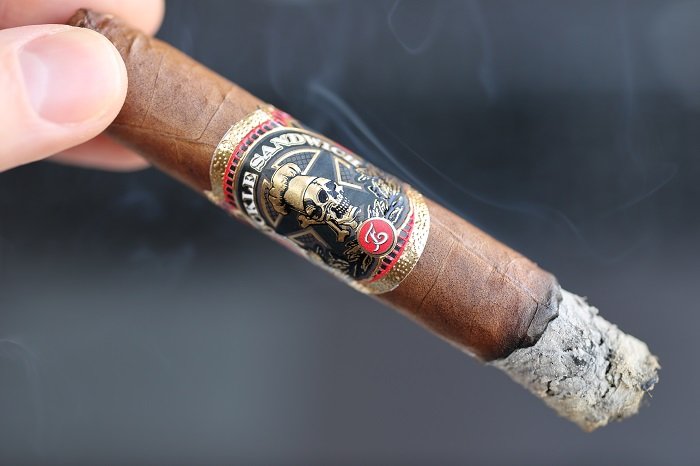 Aaron: As the final third begins, a light wood bitterness becomes present as the dry earth and toasted oak have evened up. The retrohale remains an even mix of dry earth and toasted oak with a faint black pepper. At an inch in, the toast level increases a bit. As the cigar wraps up, the dry earth and toasted oak remain even with the black pepper and light bitterness in the background. The strength remained at slightly above medium.
Seth: The final third has a strong finish, and it is dominated by pepper and mineral qualities. I am still picking up faint bread and nut qualities, tobacco and wood as well, but it is predominiaitely that of pepper and minerals. Medium-full to full in strength and body.
John: Cocoa and wood combine with baking spices, as creamy wood carries the cigar into the post draw. Creamy sweetness moves to the front of the profile as it settles into the last third. There is no more flavor evolution through the last third.
Jiunn: Flavors become quite muddled in the final third. Also, a bitter and sharp minerality forms, which deteriorates the enjoyment. Strength and body finishes the same medium-full and medium. 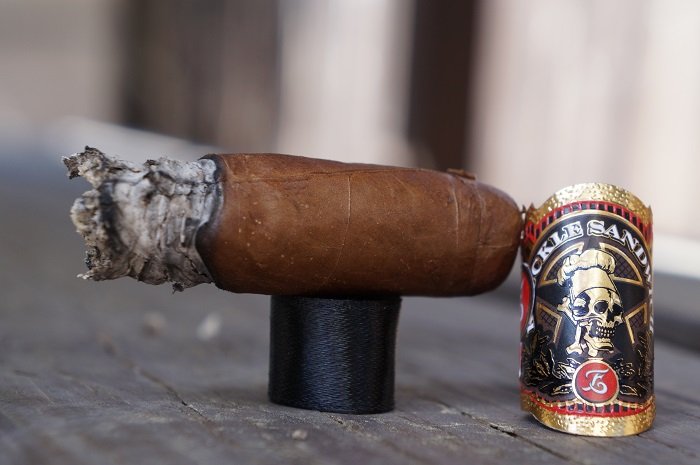 Aaron: The burn line was straight throughout and the ash held on in inch and a quarter increments.
Seth: Very nice burn throughout.
John: I could have told you this came out of the San Lotano factory based on the burn performance. The burn was straight with a one inch ash, the burn becoming slightly offset in the last third.
Jiunn: You know what being rolled at AJ’s San Lotano typically means. Yep, perfect burn performance. 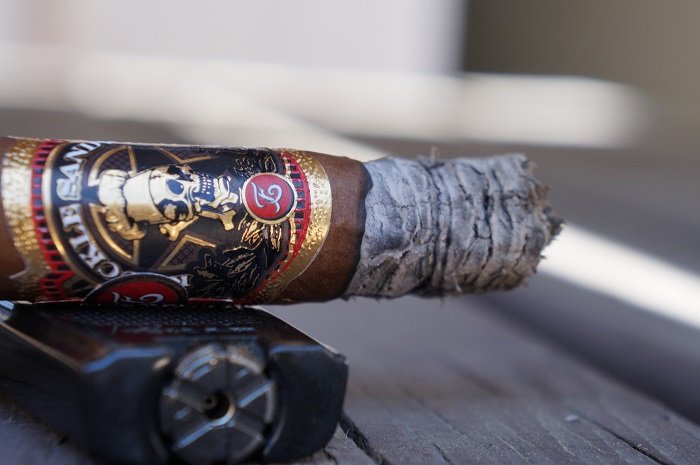 Aaron: The draw was perfect, with just the right amount of resistance that I prefer.
Seth: Perfect draw.
John: The draw was right in the ideal range between open and resistant.
Jiunn: You know what being rolled at AJ’s San Lotano typically means. Yep, perfect draw performance.