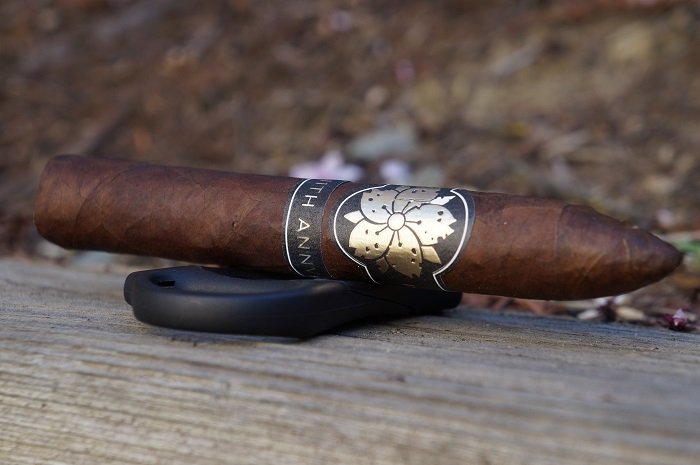 Aaron: The wrapper on the Room101 11th Anniversary is dark brown and has a few raised veins present. The seams are smooth and fairly well blended while the tapered head is very well finished. There are two bands, both carrying a black, gold and white color combination. The primary has the traditional company logo and the secondary strip band denotes 11th ANNV. The aroma from the wrapper is a wood and earth forward barnyard funk while the foot brings dark wood, raisin sweetness and some pepper. The pre-light draw brings a mix of wood and wheat bread along with a mild spiciness on my lips.
Seth: A well-constructed Torpedo, the tapered head is perfect in my opinion. The Room101 11th Anniversary sports a wrapper that is raisin like in coloring. Marbled coloring, somewhere between Colorado and Colorado Maduro, the cigar has a nice finish. There are small to medium sized veins throughout, and the wrapper is fine in texture. I am picking up aromas of chocolate, earth, spices, raisins and tobacco, and that is on the wrapper and foot.
John: The Room101 11th Anniversary is double banded with an “11th Annv” secondary band. It is cellophaned, and has a UPC sticker on the main part of the cellophane that opens. Aromas from the cigar included sweetness, rich tobacco and a prune and raisin combination. From the foot, there was hay, and a subdued raisin sweetness underneath.
Jiunn: The Room101 11th Anniversary has a beautiful oily Colorado Red wrapper. Veins are roughly pressed, seams tight, bunch and roll even and Torpedo head well wrapped. Aromas from the wrapper give stinky barnyard, sweet roasted nuttiness and a hint of minerals. Aromas from the foot give the same as the wrapper but more pronounced minerals. Cold draw tells hay and dried nuts. 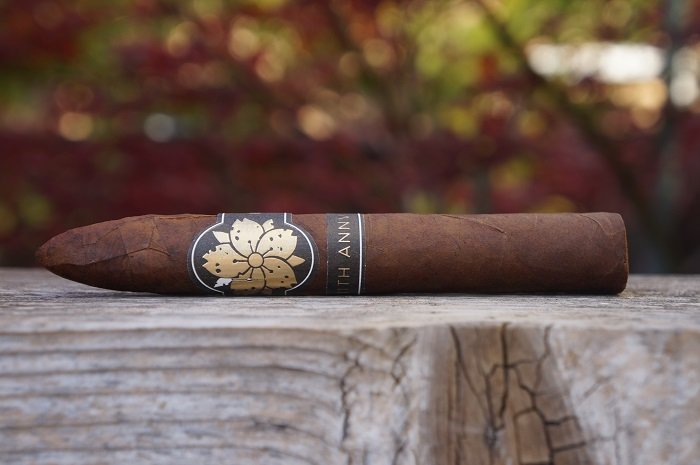 Aaron: The cigar begins with wood, baking spice and light mustiness. At a half inch in, the mustiness increases to become even with the wood while the baking spice mellows. The retrohale is a mirror image of the profile, with just a slightly fuller delivery. At an inch and a half, some earth joins the profile. The third wraps up with an even mix of wood, earth and mustiness with baking spice in the background. The strength in this third was slightly above medium.
Seth: The first third begins by delivering some musty barnyard notes that are paired with some sweet rich earth notes, tobacco and baking chocolate like flavors. I am getting some black pepper notes as well, and it has some currants and raisins on the finish. In terms of strength and body, it is between medium and medium-full. Very nice construction and solid first third.
John: My first third review experience came out of the gate with cocoa, sweetness and a general lingering wood on the palate. Medium plus strength baking spices are present through the retrohale. Once the first third had a chance to settle in, light plus citrus finishes each draw. As the cigar progresses, the cocoa becomes richer on the retrohale, and brings mild graham cracker along with it.
Jiunn: The first third gives ample cocoa powder. It’s just like cocoa powder in the sense of flavors and the dry powdery consistency of it (sort of like chocolate protein powder). The cocoa powder is combined with leather and cedar. Retrohaling introduces spice in the form of red pepper spice. The finish brings leather tannins and cedar. Strength and body is medium. 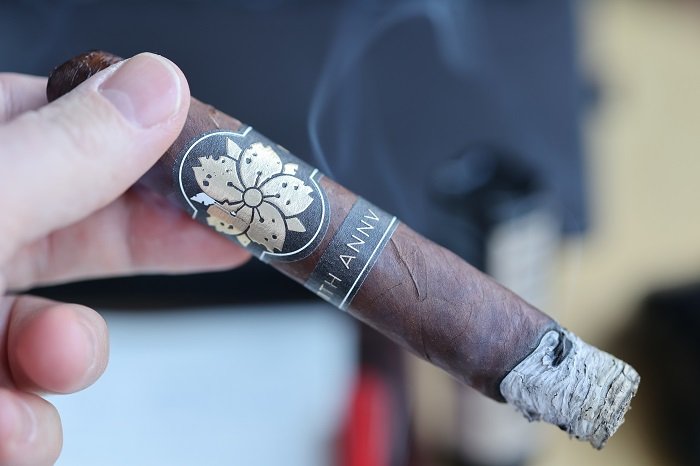 Aaron: As the second third begins, the profile is becoming slightly dry as the earth adds an overall dryness to the profile. At a half inch in, the baking spice has transitioned to black pepper and remains in the background, but does have a long finish while the wood has gained a bit of a toasted note. The retrohale is musty wood and dry earth. As the third comes to a close, the toast level has increased a fair amount. The strength in this third remains at slightly above medium.
Seth: The second third tastes like a good bran muffin that is packed with raisins. There is damp barnyard and earth, sweet spices and there is this soft finish of cocoa. You can pick up the black pepper note, but it is really being balanced out by this raisin and bran flavor. Medium to medium-full in strength and body.
John: The second third opened with citrus, graham cracker, chocolate and a combination of cedar and baking spices to finish. The post draw cedar moves up to medium strength, and brings a raisin sweetness with it. As the second third progressed, a citrus and wood combination settles into the center of the profile.
Jiunn: The second third picks up a nice creamy nuttiness and minerals. This broadens the flavor profile. But the cocoa powder still shines the most. Strength is gearing up to medium-full, while the body maintains medium. 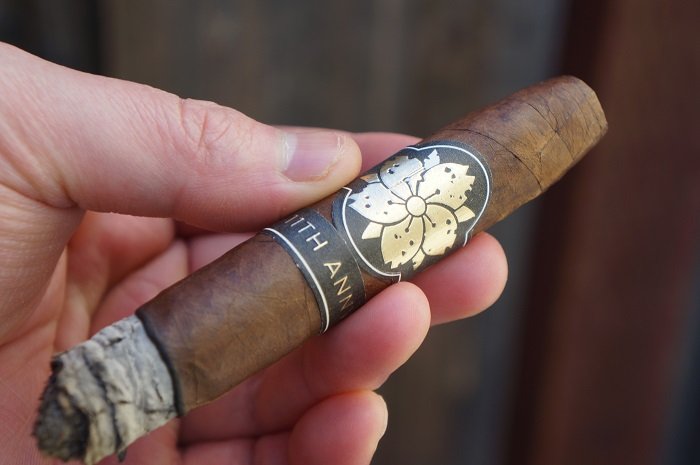 Aaron: The final third continues on with the heavily toasted and musty wood with dry earth up front and black pepper in the background. The retrohale is musty, toasted wood and dry earth. At an inch in, the toast transitions to light char. As the cigar wraps up, the char has increased a bit. The strength in this third bumped up to medium-full.
Seth: The final third delivers a profile that revolves around some baking spices, earth and baking chocolate notes. I am picking up some pepper and there are some cream and vegetal like qualities. It is a bit downhill from the first two thirds, but still solid. Medium in strength and body.
John: The last third begins cedar forward, with baking spices to finish. Some earthiness joined the retrohale a few puffs in. The baking spices move into the retrohale at light plus strength. By the halfway point, earth continues to build in strength, reaching medium strength and pushing into the main profile.
Jiunn: The final third tunes it down a bit such that I’m now mainly getting cocoa powder and increased minerals. Strength does ramp to a consistent medium plus, while body finishes the same medium. 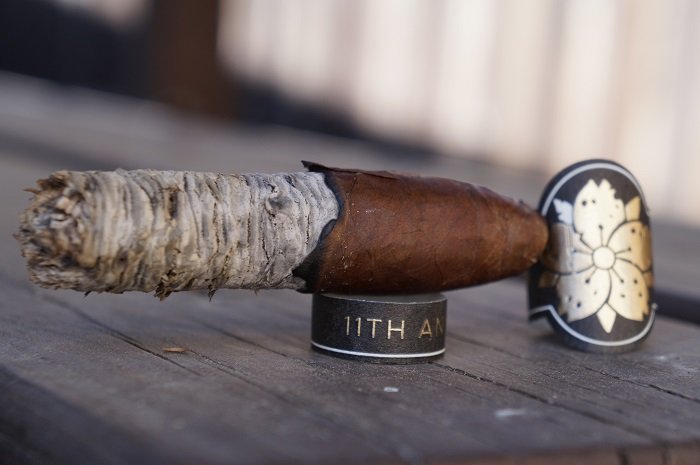 Aaron: The burn was straight through the first half and then became slightly wavy the rest of the way. The ash held on in near two inch increments.
Seth: Beautiful burn throughout. A well constructed cigar.
John: The burn was fairly straight through the review, with some uneven burn for a time in the second third that corrected itself. Ash held on well, up to 2 inches at one point.
Jiunn: Burn performance was overall very good. Just a couple mishaps in an uneven burn, requiring a couple quick touch-ups. Ample smoke production, cool burning temperature and solid ash marks. 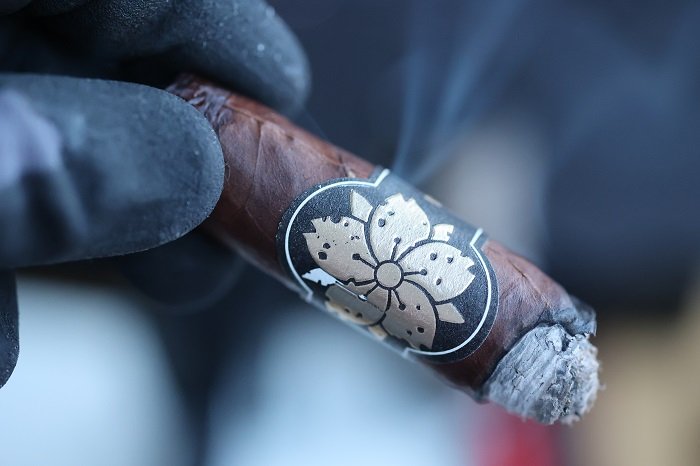 Aaron: The draw was slightly tighter than I prefer, but didn’t cause any issues with the smoking experience.
Seth: Great draw from beginning to end.
John: The draw was a bit snug and resistant, roughly 3-1/2 to 4 notches into the resistant spectrum. Inspecting the cigar, it was quite packed with tobacco.
Jiunn: The draw proved to be slightly snug on the Torpedo head. Not enough to deter from the flavors though.

Aaron: The cigar had a nice start with a good balance of flavors, but by the second third, the dry earth brought an overall dryness that knocked the enjoyment level down a bit. The final thirds heavy toast that transitioned to char knocked things down a bit more. It’s unfortunate that the flavor profile degraded as the Room101 11th Anniversary went along, as it had a nice start. The price point is pretty attractive, so it’s worth a try to see what you think, but it’s not high on my list for a revisit.
Seth: I enjoyed the Room101 11th Anniversary, and it is one of the better Room101 blends I have had since the Namakubi and Daruma days. It is a solid blend and a good Nicaraguan puro. It does not smoke like a more modern approach to a Nica puro coming out of Nicaragua though. It is a little bit lighter in the strength and body. It focuses more on the flavors. Construction was great from beginning to end, and the second third was the sweet spot. The bran muffin, cocoa and raisin flavors were fun. Shame about the final third; if it had finished stronger, I would have been really pleased with the release.
John: The Room101 11th Anniversary was a pretty good example of what an anniversary cigar release should be, at a price point that doesn’t leave you feeling used and empty on the bathroom floor of a hotel room. The first and second thirds had the most complexity for me. The burn was perfect, the draw on the cigar I smoked had some snugness to it. Given the overall good experience, and the approachable price point, I would definitely smoke another 11th Anniversary. Total smoking time was 1 hour and 46 minutes.
Jiunn: Well what do you know? The Room101 11th Anniversary is an LE cigar that doesn’t command an astronomical price point and it’s actually good. This is becoming a foreign concept lately, smoking through the various highly expensive store exclusives and other LEs. Buy this with confidence.