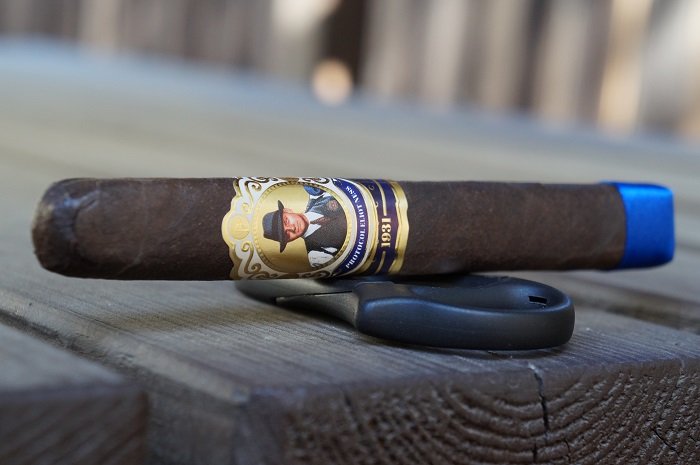 Aaron: The wrapper on the Protocol Eliot Ness Maduro is dark brown with a lot of tooth, well pressed veins and a fine grit sandpaper feel to it. The seams are smooth while the top cap on the head is lifting at the edges. There are three bands, with the primary being gold, white and blue with a portrait of Eliot Ness and this band sits over the secondary which is burgundy and gold and designates 1931. The foot band is a blue ribbon. The aroma from the wrapper is a mix of wood and bakers chocolate while the foot brings wood, anise and a decent amount of crushed red pepper. The pre-light draw brings sweet cedar along with a very mild spiciness on my lips.
Seth: Nicely pressed, the Protocol Eliot Ness Maduro sports a lovely Maduro wrapper. It has the quality of a soft Broadleaf. There is tooth and small veins present throughout. Dark chocolate bar. With a fine grit texture, the cigar is smooth in hand. Aromas of cherries, sweet tobacco, rich earth and chocolate cake on the foot. Wrapper showing spicier traits.
John: The Protocol Eliot Ness Maduro comes in cellophane and does not have a UPC code. The cigar has a square press to it, and two bands that are set on top of each other. Aromas from the cigar included aged wood, hay and a light, old barnyard underneath. From the foot, there was sweet tobacco.
Jiunn: The Protocol Eliot Ness Maduro has an even maduro wrapper shade. Veins are incredibly well pressed, seams tight, bunch and roll even but on the loose end and head well wrapped. Aromas from the wrapper give black tea, cedar and dry barnyard. Foot aromas tell a subtle nutty sweetness in addition to the same black tea, cedar and dry barnyard. Cold draw gives sweet roasted nuttiness and cedar. 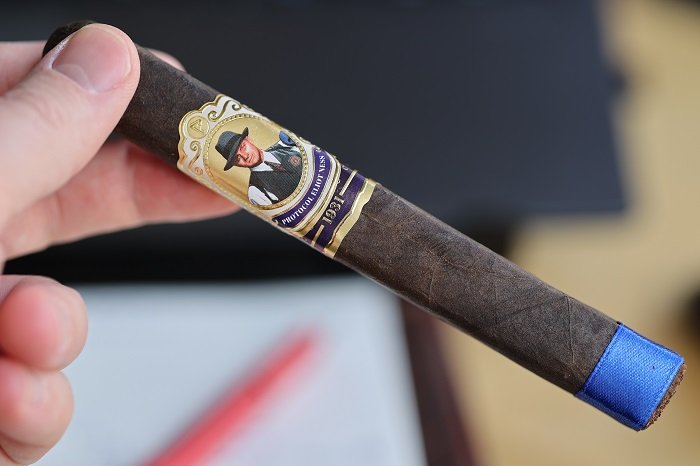 Aaron: The cigar begins with dark wood, black pepper and light cocoa powder. At a half inch in, the black pepper has mellowed. At an inch in, some dark earth joins the profile. The retrohale is musty dark wood and light black pepper. As the third comes to a close, the dark wood and dark earth are even with the black pepper a bit behind and a light cocoa powder in the background. The strength in this third was right at medium.
Seth: The first third delivers dark chocolate notes right out of the gate. There are faint spice notes present with that, and there is a finish of charred wood, toast and tobacco. It has a long finish, and smokes around medium in strength and body.
John: My initial flavor impressions were molasses, baking spices, coffee, wood, with black pepper taking the cigar into the post draw. The molasses and pepper are both full strength through the retrohale. As the cigar settled in, the retrohale took on chocolate at medium strength. There is some mild chalkiness on the chocolate finish. Approaching the halfway point, the profile becomes less intense and more dessert-like, with the sweetness and chocolate at the forefront and the spices at the lower end of intensity.
Jiunn: The first third has a proper medium-full viscosity to the broadleaf. With that viscosity come flavors of chalky cocoa, red pepper spice and spicy cedar. On the retrohale, increased red pepper spice, followed by a subtle roasted sweet nuttiness. The finish shows gritty dirt and cedar. Strength is medium-full. 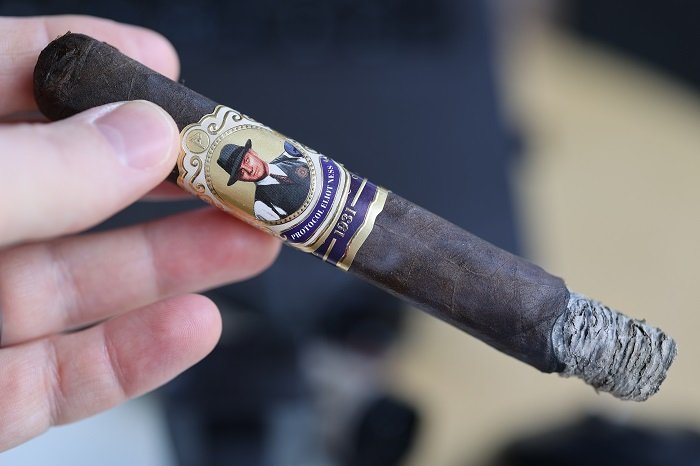 Aaron: The second third continues with the dark wood and dark earth even, with the black pepper a bit behind and a light cocoa powder in the background. At a half inch in, the cocoa powder has departed. The retrohale is now a mix of dark wood and dark earth with some black pepper a little behind. At an inch and a quarter, the dark wood gains a light toast. As the third comes to a close, the toasted dark wood and dark earth are even with the black pepper now light in the background. The strength in this third remained at medium.
Seth: The earthy notes become a little bit sharper in this third, showing some metallic qualities, but it is paired with some dark chocolate and espresso notes as well. There are wood and leather notes, and the finish is slightly salty while smoking around that medium level.
John: The second third started with creamy chocolate, citrus accents and a wood finish. The profile remained fairly consistent as when it started out, with the only change of the wood migrating into the middle of the profile as it progressed.
Jiunn: While the second third holds that great medium-full viscosity, the flavor profile suffers. The flavors shift towards being red pepper and spicy cedar forward, while losing a lot of the chalky cocoa. Strength is still medium-full. 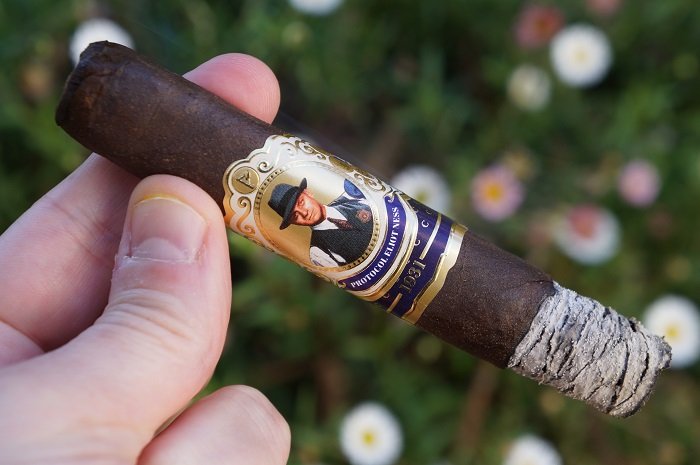 Aaron: As the final third begins, the combination of toasted dark wood and dark earth are weighing quite heavily on my palate. The retrohale is now just toasted dark wood with black pepper in the background. At an inch in, the dark earth takes a slight lead over the toasted dark wood. At an inch and a quarter, a decent level of bitterness joins the dark wood. The strength in this third bumped up to slightly above medium.
Seth: The final third delivered those strong earth and dark chocolate notes. I was picking up that charred wood, toast and tobacco notes, and the finish with that of espresso and spices. It increased to medium-full in strength and body.
John: My first few puffs of the last third were sweet chocolate, mild creaminess and a finish of baking spices and cedar into the post draw.
Jiunn: Oddly, there’s pockets of syrupy sweetness mixed into parts of the final third. The profile still has the same medium-full strength and body of red pepper, spicy cedar and gritty dirt. 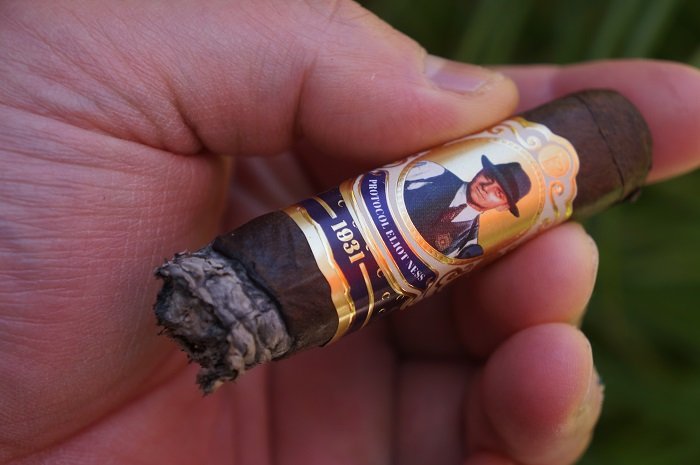 Aaron: The burn was straight the entire way and the ash held on in inch and a quarter increments.
Seth: Burn was nice throughout.
John: Two cigars were smoked for the review, both had a straight burn with a bright white ash. No burn issues were observed and no intervention were required with either.
Jiunn: What do you expect from AJ’s factories? A perfect burn. And that is what I got. 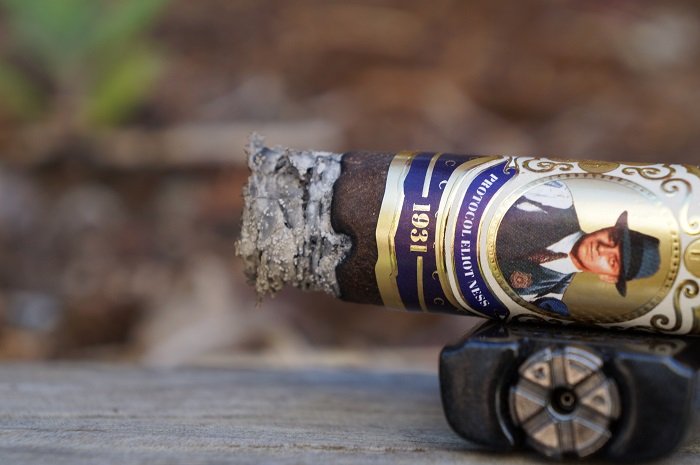 Aaron: The draw was perfect, with just the right amount of resistance that I prefer.
Seth: Good draw from beginning to end.
John: Two cigars were smoked for the review. The first cigar started out 3 to 3-1/2 notches into the resistant spectrum, eventually opening to 2-1/2 to 3 notches while smoking. The second cigar was 2-1/2 to 3 notches into the resistant spectrum, and the draw remained consistent through the review.
Jiunn: What do you expect from AJ’s factories? A perfect draw. And that is what I got.

Aaron: The cigar has a very dark and heavy profile focused around dark wood and dark earth with some supporting black pepper. While the Protocol Eliot Ness Maduro started well, it waned through each following third. If you’re a fan of dark and heavy profiles, you’ll find something you like here. For me, the profile needed something else to keep my attention and break up the dark wood and dark earth dominance. Between the Natural and Maduro versions of this line, I’d likely lean towards the Natural.
Seth: I have never understood the thought process that goes into making a line with multiple wrapper offerings. I know there are examples of the offerings both doing well, but often you end up with at least one disappointment. Significantly better than the Natural, the Protocol Eliot Ness Maduro should have been the single offering for the Eliot Ness line/brand. While it was not great, it was solid throughout. It had a nice start before leveling out in my opinion, and I was expecting a little more body and strength. Nice construction. Price is high for what is delivered, but right in line with the other $11 to $12 cigars on the market.
John: The Protocol Eliot Ness Maduro was consistently good through both cigars reviewed. The profile was more spice driven in the first third, dessert-like in the second third and chocolate and cream in the last third. Construction was consistent with both cigars reviewed; some small resistance to the draw and a perfect burn. After reviewing both the Natural and Maduro, I would say that I found the Maduro to be more consistently engaging through the entire smoking experience. Total smoking time was 1 hour and 52 minutes for the first cigar, and 1 hour and 20 minutes for the second cigar.
Jiunn: I’ve yet to find a “Lawmen Series” that I fully enjoy. However, the Protocol Eliot Ness Maduro actually comes somewhat close. While the majority of the smoking experience was rewarding, it needs help in being more consistent in the flavor delivery. I do think it’s a quality made cigar though.