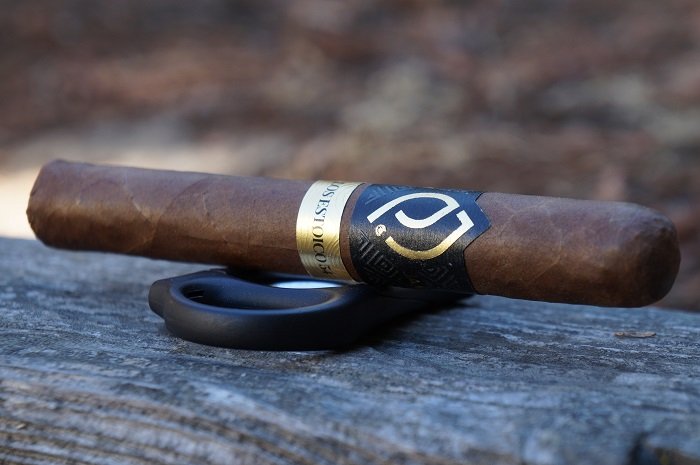 Aaron: The wrapper on the Peter James Los Estoico 54 Habano is medium brown with some marbling along with lightly raised veins that carry a lighter color surrounding them. The seams are slightly raised in some areas while the caps are well applied. There are two bands, with the primary being black and gold with the company logo on front and name on each side. The secondary band is gold and black and denotes the line name along with the city and country of origin. The aroma from the wrapper is musty earth while the foot brings a mildly sweet shortbread cookie note along with a light spice. The pre-light draw brings cedar and a mix of stone fruit and cotton candy sweetness along with a mild spiciness on my lips.
Seth: The Peter James Los Estoico 54 Habano was lovely in appearance. Nice Colorado wrapper that had a soft browinsh red coloring. Smooth in texture with small veins thoughout. Firm throughout as well. Aromas of leather, coffee, earth, nuts and tobacco.
John: The Peter James Los Estoico 54 Habano comes in cellophane and has a QR code that tears in half when the cellophane is opened. The cigar is double banded with a primary Peter James band, and a secondary band that indicates Hecho A Mano Los Estoico 54 Esteli Nicaragua. Aromas from the wrapper included sweet wood and mild bread. From the foot, there is sweet tobacco.
Jiunn: The Peter James Los Estoico 54 Habano has a uniform Colorado wrapper coloration. Veins are well pressed, seams tight, bunch and roll even and head well wrapped and capped. Aromas from the wrapper tell of barnyard and roasted nuts. Aromas from the foot give ample yeasty bread and a hint of white pepper spice. Cold draws reveal meat/game, hay and barnyard. 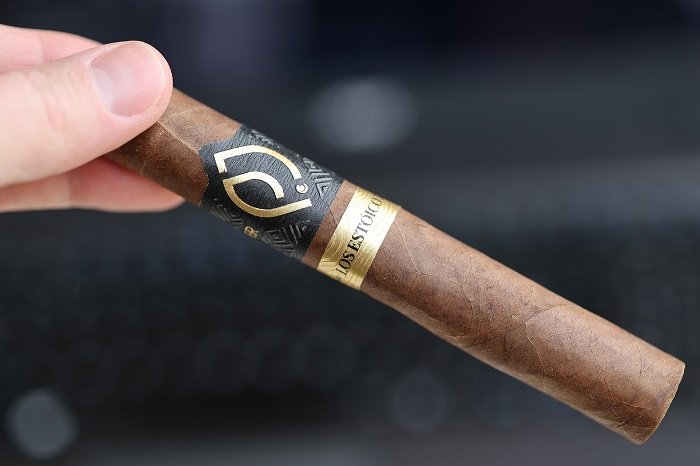 Aaron: The cigar begins with lightly toasted oak and a mild baking spice. At a half inch in, a light earthiness joins. The retrohale is toasted oak, baking spice and light earth. As the third comes to a close, the earth is right behind the toasted oak while the baking spice is in the background. The strength was right at medium.
Seth: The cigar was an easy smoke and it was giving off qualities of dry earth, leather, wood shavings, tobacco, some raw nuts and coffee qualities. Medium in strength and body.
John: The first third gets going with sweet bread, mildly spicy wood and sweet, nutty wood through the post draw. On the retrohale, some medium strength, sweet spices and nuttiness combine. As the first third settles in, all the flavors manage to find a harmonious balance of strength.
Jiunn: The first third has a major problem. The cigar when sitting there by itself smokes up a chimney. However, when drawing on it, the smoke production is meek and therefore, I’m not getting many flavors. Flavors are very airy with some roasted nuts, sugar cane sweetness, cedar and slight synthetic vanilla. Retrohaling is kind of worthless, as I’m not getting any flavors at all due to the terrible smoke production. The finish is thin with a hint of synthetic vanilla and associated sweetness. Strength and body is medium. 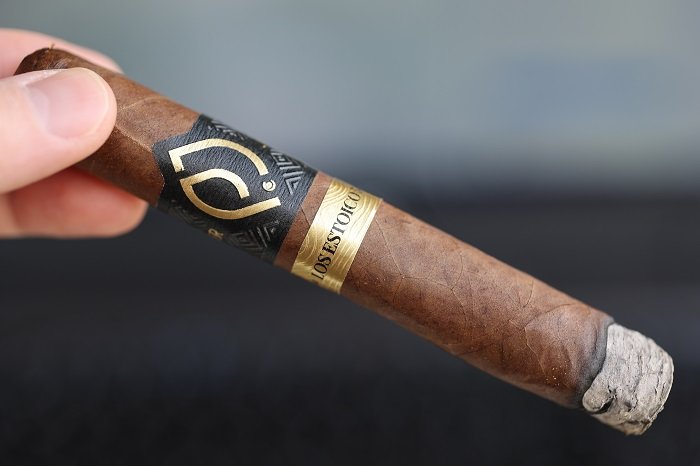 Aaron: As the second third begins, the earthiness lightens. At a half inch in, a light chalkiness joins the profile. The retrohale is an even mix of toasted oak and earth with a mild baking spice. At an inch in, the earth is back to even with the toasted oak. As the third comes to a close, the profile is an even mix of toasted oak and earth with baking spice a fair distance behind and chalkiness in the background. The strength remained at medium.
Seth: The second third was fairly in line with the first third. Wood shaving qualities with leather, earth, nuts and coffee. Very familiar profile, but I can’t identify. Medium in strength and body.
John: The second third is similar to the first third with sweet bread, baking spices and wood all combining at medium-minus strength. Spicy wood trails into the post draw to linger. Again, the profile is very balanced like the first third. There’s no more evolution through the second third, which is not a detraction as the profile is engaging.
Jiunn: The draw smoke production issues are still there. I might get a bit more cedar out of the profile now but that’s a bit outreaching. Still overall the same air and thin flavors. Strength and body is still medium. 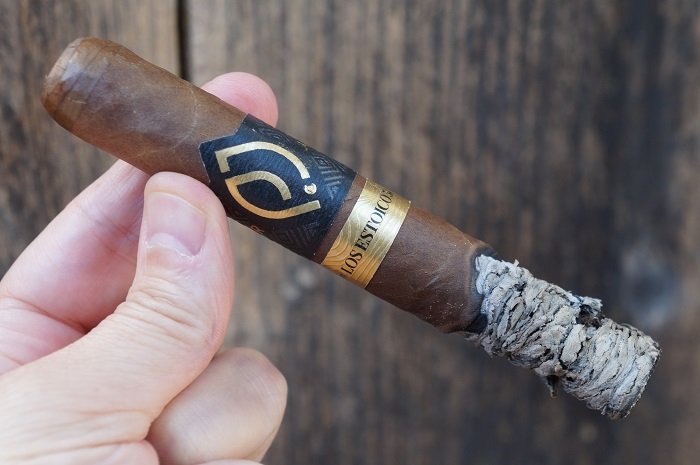 Aaron: The final third continues with the profile of toasted oak and earth even up front with baking spice a bit behind and chalkiness in the background. At a half inch in, the oak gains a bit of a stale note. The retrohale is now just an even mix of toasted cedar and earth. As the cigar wraps up, the toasted oak and earth are even up front with the baking spice and chalkiness in the background. The strength remained at medium.
Seth: The final third was in line with the first and second. Nearly identical.
John: The last third is bread forward as sweetness starts to fade here. There is a medium strength wood to finish on the post draw. As the cigar progresses, wood moves to the front of the profile and becomes the primary flavor driver.
Jiunn: The draw smoke production issues are still there. There has been a change in flavors though. But it isn’t a pleasant one, as there is now a charred cedar note. The overall feel is still airy and bland. Strength and body finish the same medium. 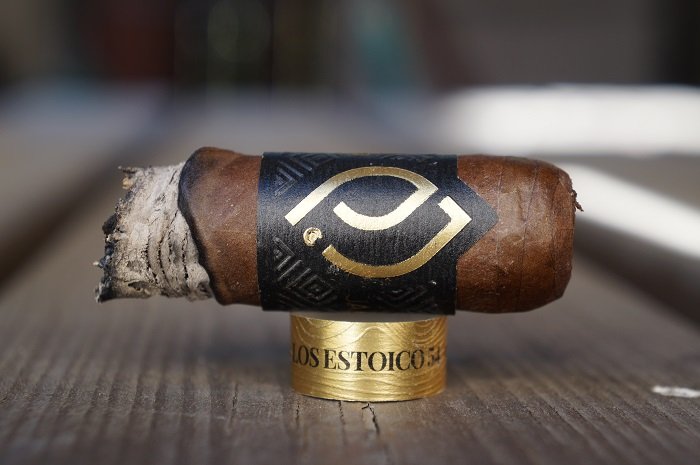 Aaron: The burn was a bit wavy at times and the cigar went out once at the beginning of the final third, requiring a re-light. The ash held on in inch and a half increments.
Seth: Very good burn throughout.
John: The burn is straight through the review, with the ash holding on up to 1-1/2 inch increments.
Jiunn: As I’ve called within the first to final third, the draw smoke production was horrendous. It’s pretty simple honestly, no smoke out, no flavors. Vastly disappointing. 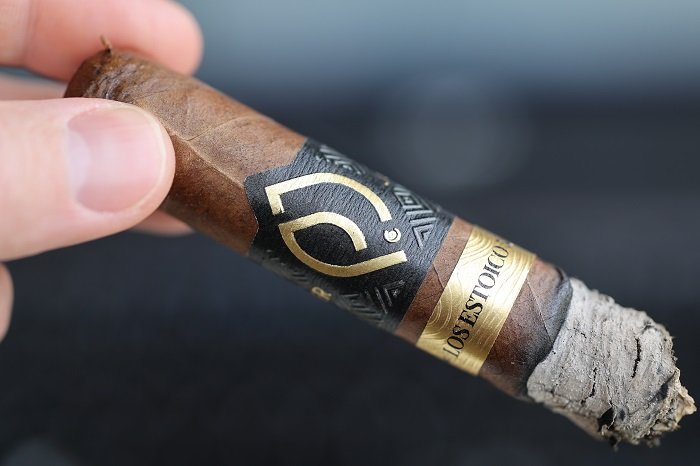 Aaron: The draw was slightly tighter than I prefer, but didn’t cause any issues with the smoking experience.
Seth: Easy draw.
John: The draw is a minor amount into the resistant spectrum, roughly 1-1/2 notches.
Jiunn: From the perspective of air flow and resistance of draw, it was actually perfect.

Aaron: The cigar began with lightly toasted oak and a mild baking spice. Some earth joined a bit later. The second third saw a light chalkiness join in and maintained that profile the rest of the way. The Peter James Los Estoico 54 Habano started well, with a simple but good flavor combination. As the earth increased and the chalkiness joined, it took the enjoyment down to average and maintained that level through to the end. It was nice to smoke a cigar from a new brand, but it became a bit linear from the the second third on. Not something I’d come back to all that often, but I’m interested to see how the Maduro fares.
Seth: I wasn’t blown away by the Peter James Los Estoico 54 Habano, but I wasn’t disappointed. I don’t smoke many cigars often, but I could see myself smoking these from time to time with a lower price if my shop carried them. It’s an easy smoke and I like the size. It really reminds me of a past cigar I have smoked.
John: The Peter James Los Estoico 54 Habano does not top the charts in the amount of words I’ve written on a review, but it also delivers a number of flavors that combine in a balanced way around the medium strength mark. The first and second thirds were the most engaging, with the last third becoming largely flat with a wood forward profile. The draw was a minor amount into the resistant spectrum, and the burn was flawless. I’d happily smoke the Peter James Los Estoico 54 Habano again, this is my kind of cigar, and I think with the strength being around medium, it should have fairly broad appeal. Total smoking time was 1 hour and 50 minutes.
Jiunn: My experience has to be a one off with all the draw smoke production issues. If it is, don’t take my word on this Peter James Los Estoico 54 Habano at all and trust my teammates takes. Minimal smoke equals minimal flavor, terrible time smoking the cigar, think about life, watch some Thursday night football, think about what to eat for dinner, ok what are we talking about here? Right, this cigar. Obvious pass for me.