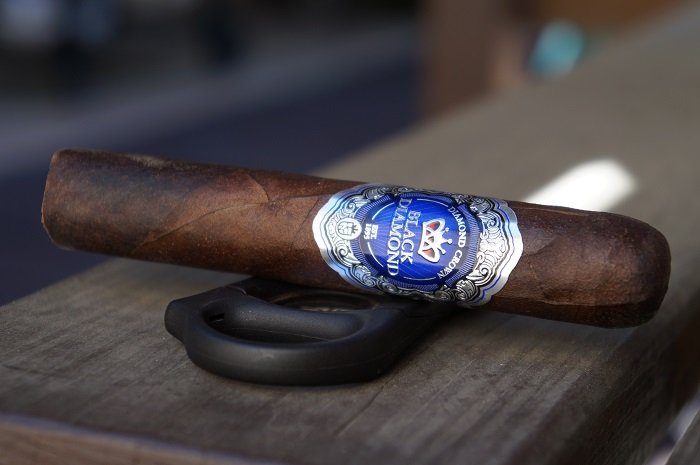 The color of the wrapper varies from medium to dark brown with it being lighter in the middle of the cigar. There is also a bit of the glue used on the wrapper that is dried and runs about an inch and a half from the foot up. There are a couple of prominently raised veins present and the seams are easily visible due to the color variation of the wrapper. The caps are applied very well and it’s hard to tell if there are two or three. The band is primarily silver with blue and black and designates the brand and line names. The aroma from the wrapper is a mix of sweet hay and slightly damp wood. The foot brings wheat bread, stone fruit sweetness and a mild white pepper. The pre-light draw is a mix of bread, cedar and mild white pepper that lingers on my lips. 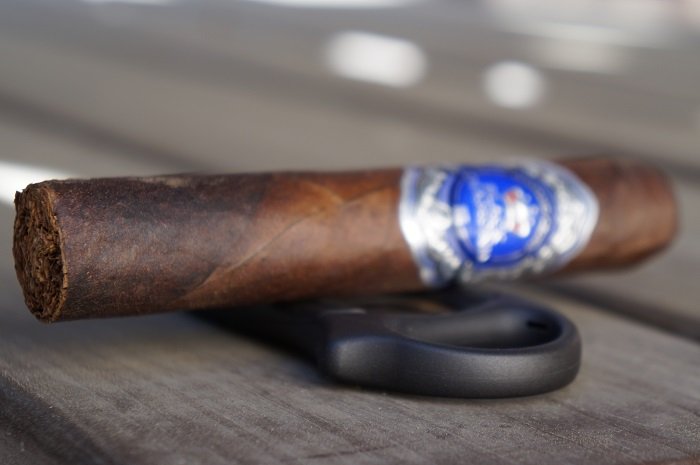 The Diamond Crown Black Diamond Marquis is lovely in appearance and sports a solid maduro wrapper, near oscuro in my opinion. It is obsidian in coloring, and has minor tooth and small veins throughout. It is firm in texture and appears to be well rolled. The wrapper is giving off aromas of soft spices, wood, meat and herbs, while the foot is giving off aromas of rich earth and spices. 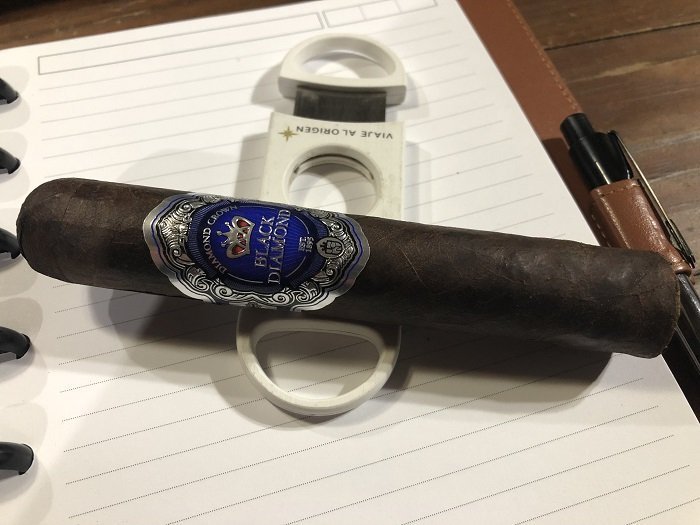 The Diamond Crown Black Diamond Marquis has a dark, toothy, rustic looking wrapper. Very reminiscent of Connecticut Broadleaf. The band has a bright blue background, silver lettering with silver accents, and red accents in the crown. Nosing the wrapper I’m able to pick up barnyard, significant amounts of wood and background notes of hay. In the foot, there is a subdued sweet raisin and tobacco. 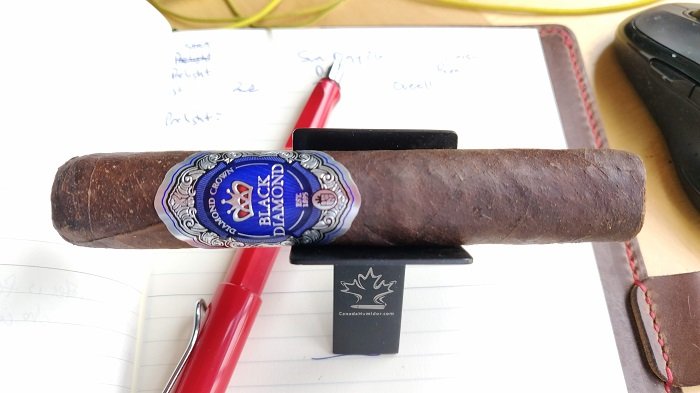 The Diamond Crown Black Diamond Marquis is a large ring gauged 56 x 5.25 cigar. The Connecticut Sungrown wrapper is not uniform with the color shading, ranging from spots of darker brown to lighter brown. Veins are roughly pressed, seams tight, bunch and roll even and head finished off with a deep multilayered cap. Aromas from the wrapper brings cedar and hay. Aromas from the foot gives cedar, hay and black pepper. Cold draw gives cedar and hay. 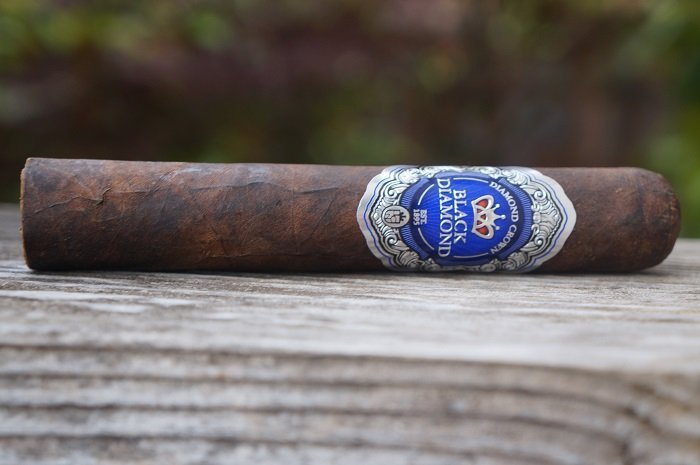 The cigar begins with wood and a cinnamon forward mix of baking spices. At a half inch, some mustiness joins the profile. At an inch in, the baking spice is now just a general representation. The retrohale shows the same mix of wood, baking spice and mustiness. As the third comes to a close, a very slight char joins the wood. The strength in this third was slightly below medium. 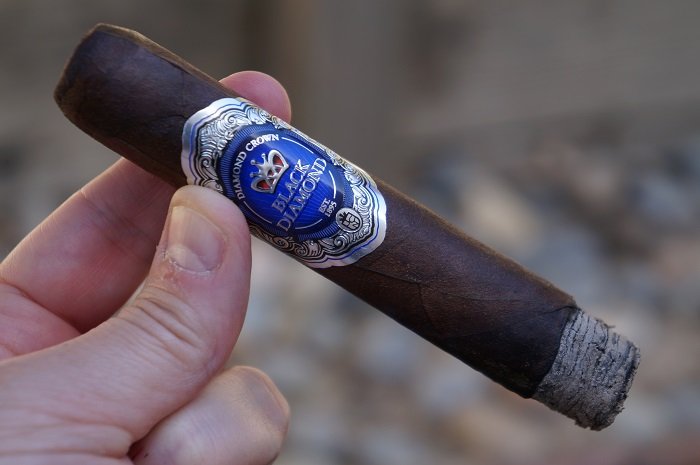 The first third is wonderful in terms of flavors delivered and I am getting some cherries, dark chocolate and Asian spices. There are some faint wood and tobacco notes as well and it is a lovely beginning. I would classify the cigar as being medium to medium-full in strength and body, and everything works off of one another perfectly. 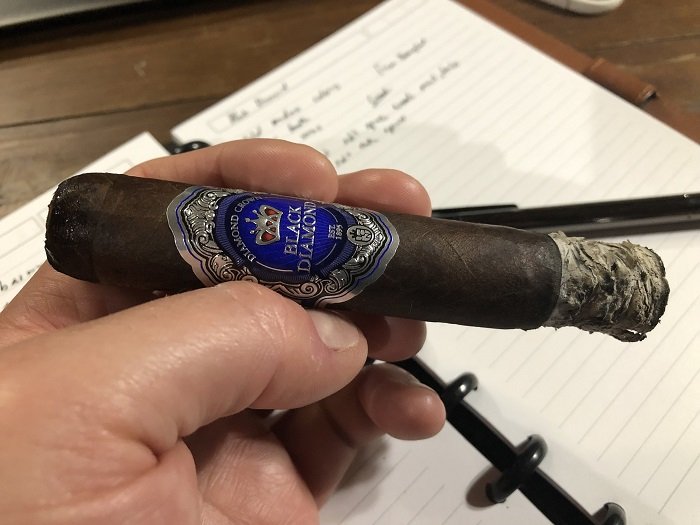 My first few puffs bring a big dry woody flavor. The retrohale is sweet wood with a leather and tannic wood finish. There is mild earth hiding at the end of the draw as the wood transitions over to the earth post draw. That post draw leather finish intensifies to a medium minus strength as the cigar settles in. Dry pepper joins the post draw at light plus as the cigar burns towards the halfway point. Dry prunes or raisin joins the post draw to accent the leather and earth. 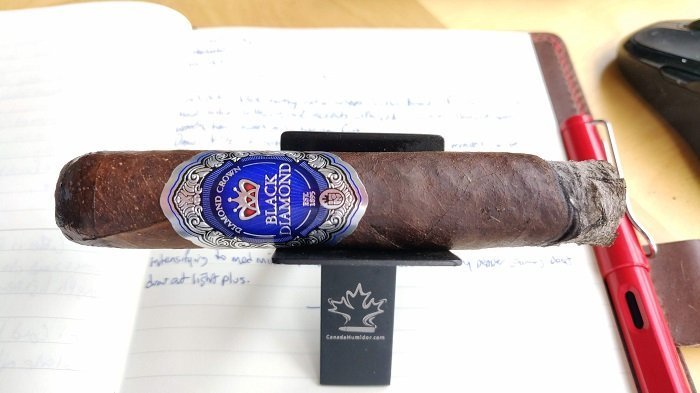 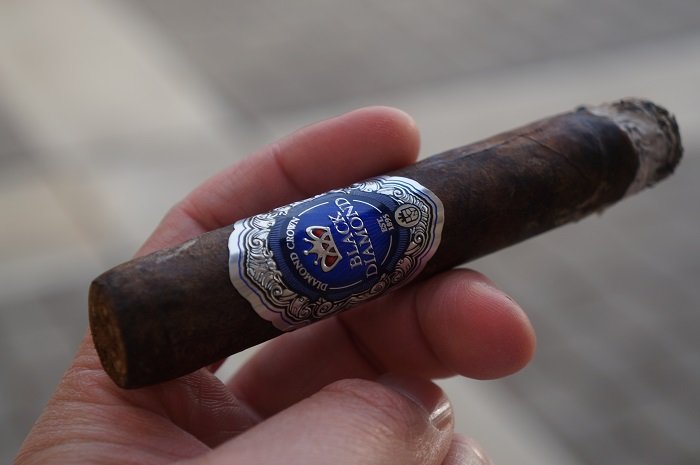 As the second third begins, the mustiness has increased and is now even with the slightly charred wood. The baking spice is in the background but does have a long finish. The retrohale continues to mimic the same profile from the mouth draws. At an inch in, the char has begun to increase a bit. As the third comes to a close, the profile becomes slightly drying. The strength in this third bumped up to medium. 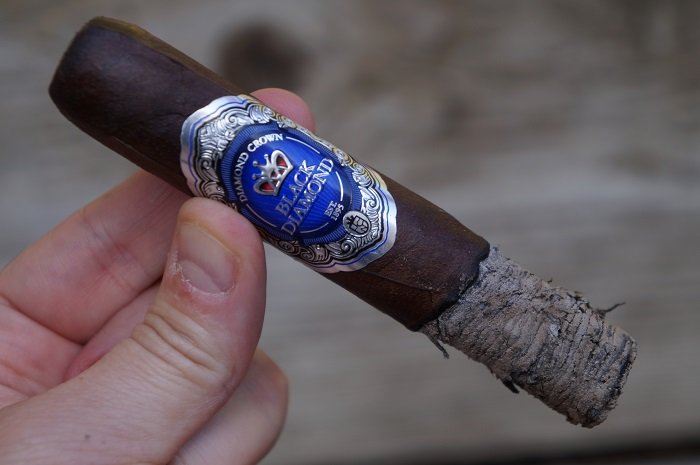 I am in the second third of the cigar now and finding some similarities to before with some change in dominance. I am picking up chocolate, Asian spices, rich earth and tobacco notes, and the finish is that of soft cherries. Like before, the cigar is between medium and medium-full in strength and body and really enjoyable. 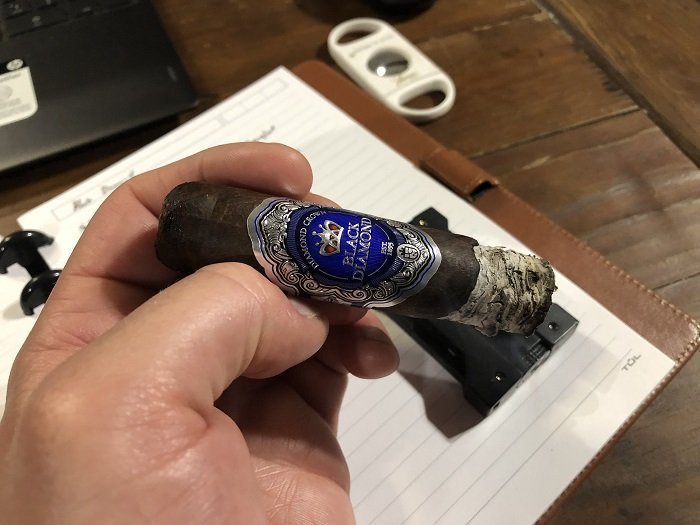 The profile transitions to sweet cedar moving into the middle third. There is still mild tannins on the post draw. Mild nutmeg occasionally pushes through the profile, and the earth component seems to come from that spice. As the cigar settles in, there’s no notable evolution. Post draw tannins steadily increase to medium strength, as post draw earthiness moves to medium minus. That earthiness gradually moves from the post draw top mid palate, and then to the front of the palate and tongue. 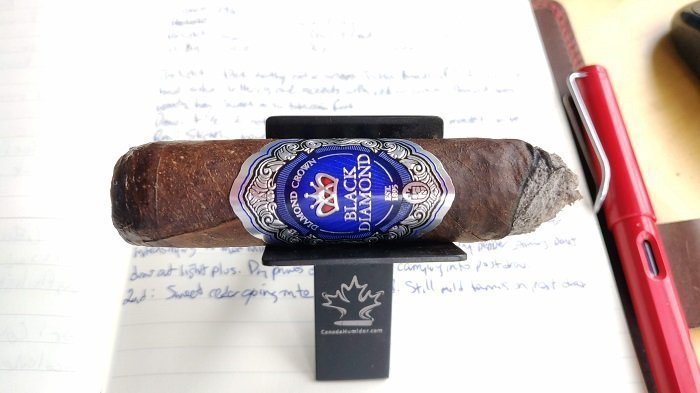 The second third is mainly a lingering dry red pepper spice and cedar on the palate. The profile towards the latter part of the second third picks up a heat and char. Strength and body is still medium. 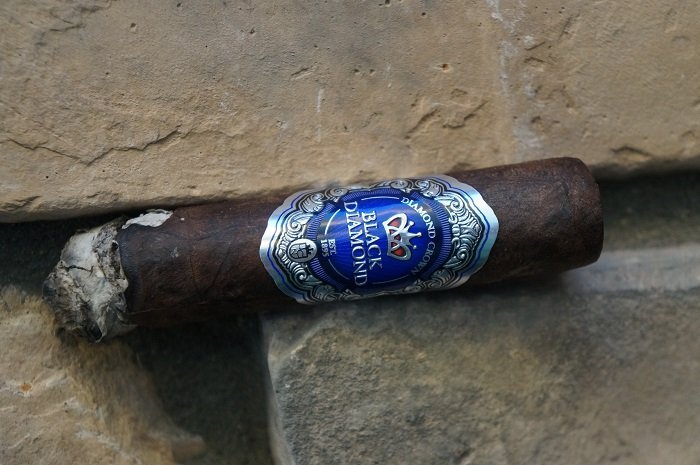 As the final third begins, the charred wood has continued to increase and has the lead over the mustiness while the baking spice has now left the profile. At a half inch in, the wood is becoming more defined as charred oak. The retrohale shows the charred oak and mustiness. At an inch and a quarter, the cigar begins to warm up which brings a toasted note to the profile. The strength in this third remained at medium. 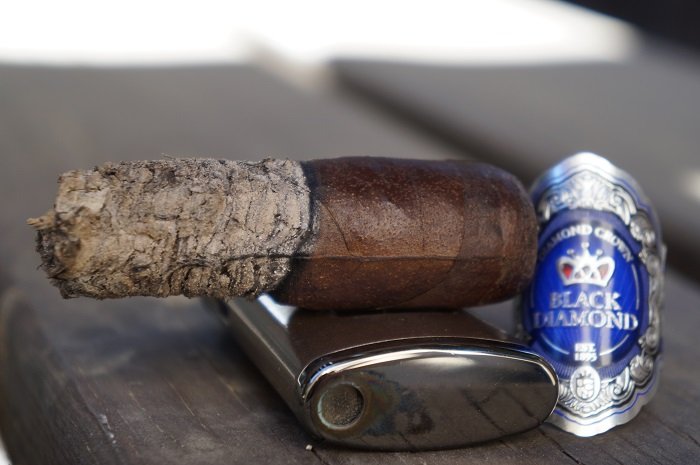 I am in the final third of the cigar now and finding a nice change in the flavor profile. I am picking up some coffee and oak now, and it is paring so well with the rich earth and cherry notes. There is a faint bit of chocolate on the finish, and it is paired with some Asian spice notes which make for a great ending. The cigar is still smoking at a level between medium and medium-full, but it has worked so well with the flavors. 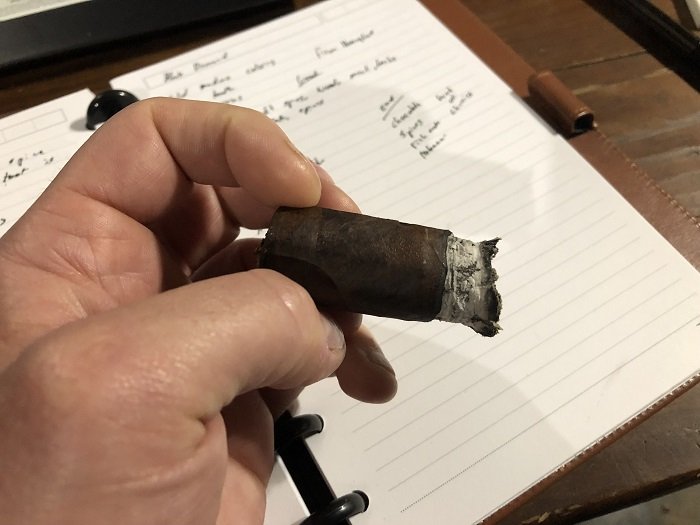 Earth takes over the front and mid palate as well as the post draw, with intermittent char throughout. Sweet cedar moves into the mid palate as the cigar settles in. 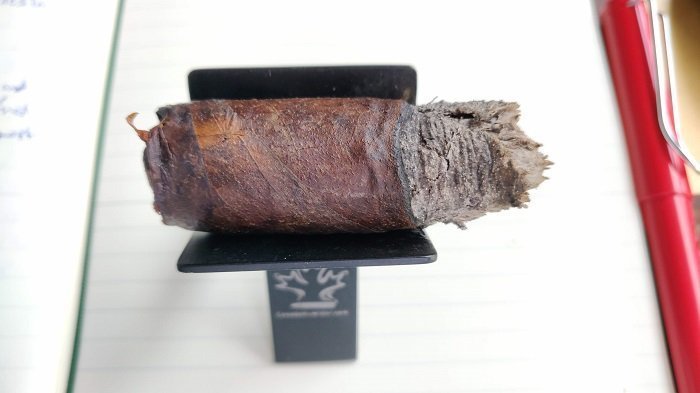 The last third (although a bit late) finally shows some quality to the flavor profile. I’m still getting pre-dominantly cedar and dry red pepper spice, but now there is a nice creamed sweetness that balances out the spice and wood notes. Strength and body finishes medium. 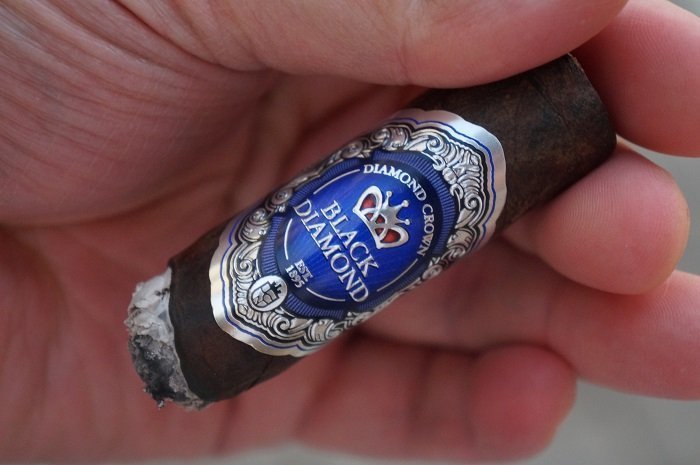 The burn line was slightly wavy but never needed any attention. The ash held on in inch and a half increments. 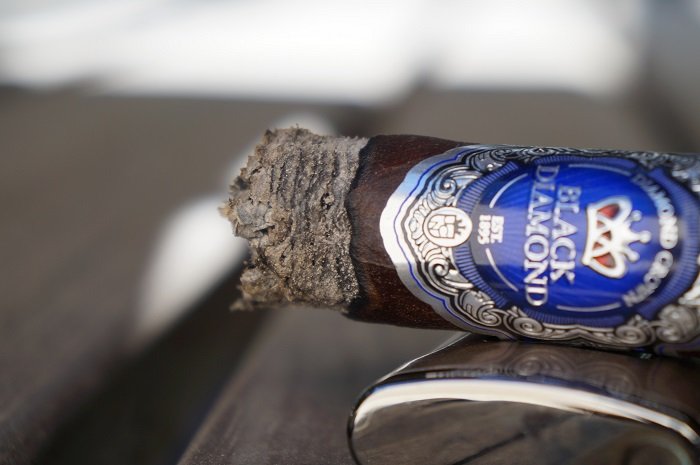 The burn has been solid from beginning to end. It hasn’t been perfect, but at the same time far from being a problem. I believe the wrapper is so thick that it has made for an imperfect smoking experience. With that being said, the ash has held on well throughout and produced a nice firm light charcoal gray coloring. 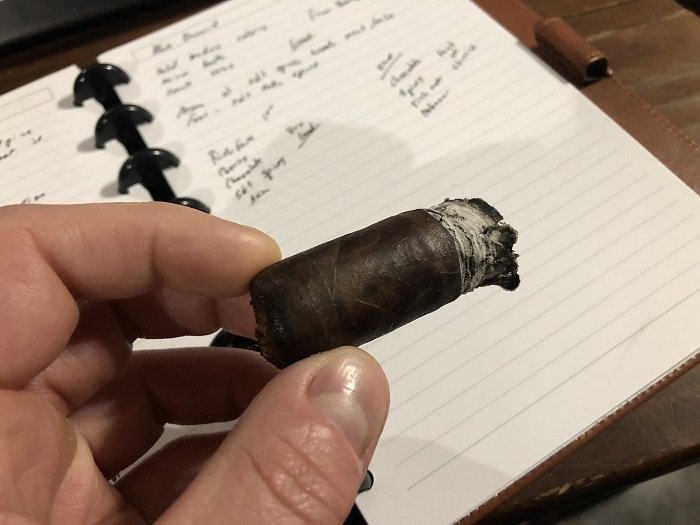 The burn had some slight unevenness to it at times through the experience, but always self corrected, no touch-ups required. Ash held on well at 2 inches plus. 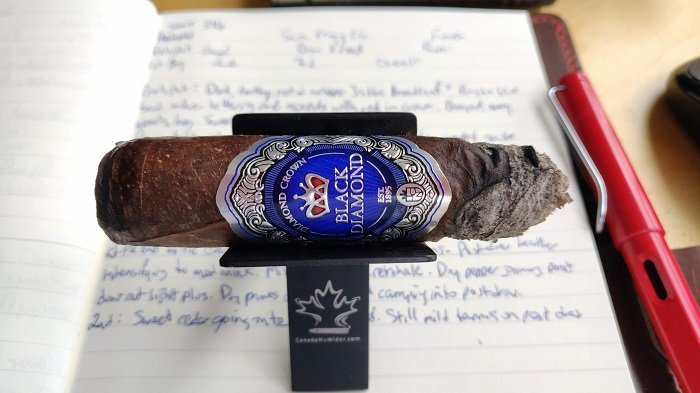 The burn was quite disappointing as half the wrapper refused to burn throughout the entire smoking experience. 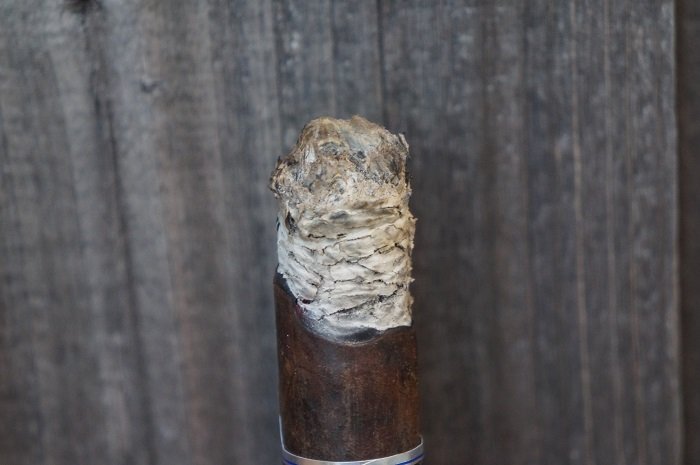 The draw was slightly looser than I prefer, but in a larger ring gauge, that tends to be accentuated a bit.

The cigar began with wood and a cinnamon forward baking spice. As it progressed, some mustiness joined and the baking spice morphed into the general variety. Getting into the second third the spice became quite faint and was mainly present on the finish. As the cigar wrapped up, the wood became more defined as oak and the char had built up. Strength was right around medium the whole way and construction was very good. The first third had a nice profile, but once the charred wood took the lead and the baking spice faded away, it became fairly average. This carries a hefty price point and for the enjoyment level I received, I don’t think it matches up. I’m sure there are some that will really enjoy this cigar, and for those, I would think they’ll find better value. I’d smoke this again, but wouldn’t be in a hurry to seek out more.

The draw was very good from start to finish and most would consider it perfect, but I prefer my draw a little bit more snug. With that being said, the cigar smoked slowly and left the smoker with a great experience that was very flavorful.

I have a great deal of respect for J.C. Newman and while I have never been a fan of a majority of their offerings, the ones I do enjoy I truly get behind. Black Diamond is one of those lines I can truly get behind. It is a rich cigar that has a lot of great flavors throughout. It is never too much in terms of body and strength, but perfectly balanced with the flavors delivered. It is complex, showing some transitioning and more importantly very enjoyable. The dark chocolate, Asian spice and cherry notes play off of each other perfectly and the presence of those flavors throughout, and their change in dominance make for a terrific experience. I would highly recommend, and the Diamond Crown Black Diamond Marquis is a cigar I will come back to time and time again.

Draw was 1-1/2 to 2 notches into the resistant spectrum but didn’t seem to impact smoke production.

The Diamond Crown Black Diamond Marquis seemed to lack complexity. The flavors are often muddled and become progressively unbalanced as the cigar experience moves into the final third. Cedar is the flavor driver until earth takes over the profile almost completely in the last third. Construction was excellent, and the draw has a slight resistance to it but nothing significant. Overall, I found the experience to be average.

The draw was a bit snug for my liking but still proved to be very good.

This cigar was an average smoking experience and quite frankly, a bit of a let down. For the vast majority of it, the profile lacked character being too dry red pepper heat/spice and cedar driven. Compound that by a $19 price tag and pretty terrible burn performance, for me it is not worth the price point. Here’s to hoping I may have gotten a dud cigar.