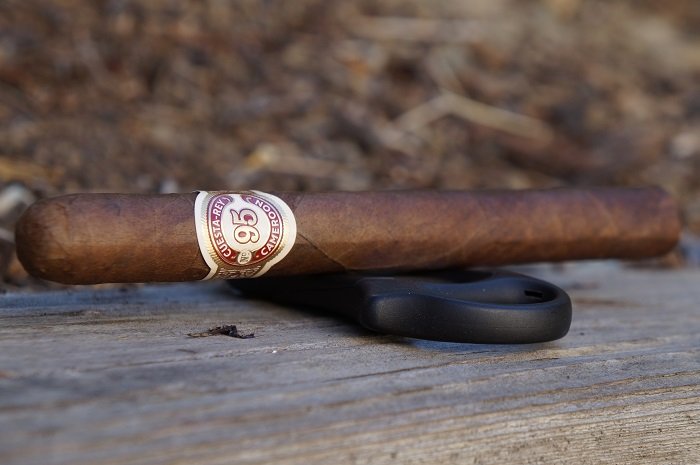 Aaron: The wrapper on the Cuesta-Rey No. 95 Cameroon is a marbled medium brown and has a network of raised veins present. The seams are a bit raised while the caps are well applied. The band is burgundy, gold and white and denotes the brand and line names. The aroma from the wrapper is wood and light honey sweetness while the foot brings more wood along with a mushroom note. The pre-light draw brings slightly sweet cedar along with mushroom mustiness.
Seth: This Cuesta-Rey No. 95 Cameroon is not the prettiest of cigars, but I rarely find Cameroon wrapper to be truly appealing. The cigar has faded coloring throughout, and it has some Natural to faint Colorado coloring. Really a dry soil quality. Veins present and medium to large in size. Aromas of hay, sweet cedar, leather, soft earth,and lemongrass. Firm cigar.
John: The Cuesta-Rey No. 95 Cameroon comes in cellophane and has a UPC sticker that tears in half when opened. The cigar is single banded and the cap and wrapper have a “rustic” appearance to them. The cigar feels firmly packed throughout its entirety. Aromas from the cigar included sweet, musty tobacco with wood accents. From the foot, I could smell sweet tobacco and wood.
Jiunn: The Cuesta-Rey No. 95 Cameroon has a Colorado Maduro wrapper shade showing some nice traces of tooth. Bunch and roll is even, seams tight, veins well pressed and caps well applied. Aromas from the wrapper tell of rich, roasted sweet and creamy mixed nuts. Aromas from the foot give the same but with added punchy dry red pepper spice. Cold draws reveal hay and mixed nuts. 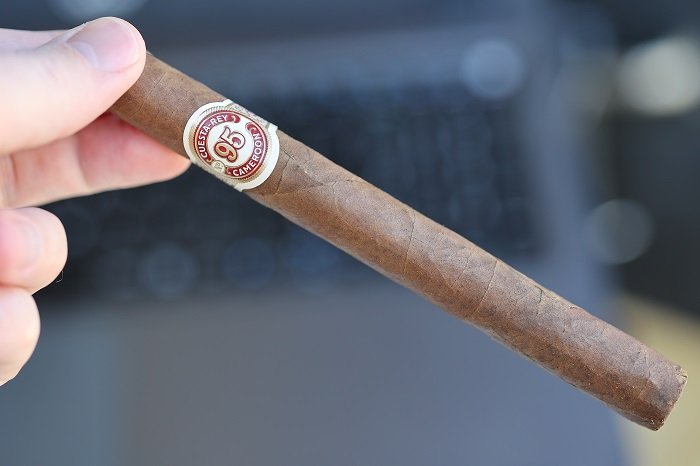 Aaron: The cigar begins with lightly toasted cedar, mushroom mustiness and a faint bitterness. At a quarter inch in, the bitterness departs. The retrohale is toasted cedar and light mustiness. At an inch in, a very light earthiness joins the profile. At an inch and a quarter, a mild baking spice becomes present. As the third comes to a close, the profile is toasted cedar up front, with mushroom mustiness a bit behind and light earth and baking spice in the background. The strength was mild-medium.
Seth: The first third starts out with lovely sweet tobacco notes that are paired with some lemongrass and hay qualities. Bits of dry earth present along with some black pepper. Balanced cigar that is mild to medium in strength and body.
John: The first third opens with tannic, dry wood. Some musty tobacco moves into the center after just a few puffs. As the first third settles in, mild nutty flavors come through the retrohale. The profile is pleasant, but doesn’t evolve beyond a sweet wood and musty tobacco center.
Jiunn: Rich, sweet and spicy, just how it should be. Naturally creamy and sweet bread, mixed nuts and assertive dry red pepper spice that does a good job of lingering on the palate. Retrohaling accentuates the sweetness and the spiciness, but also adds a black tea note. Strength is medium-full and body is medium. 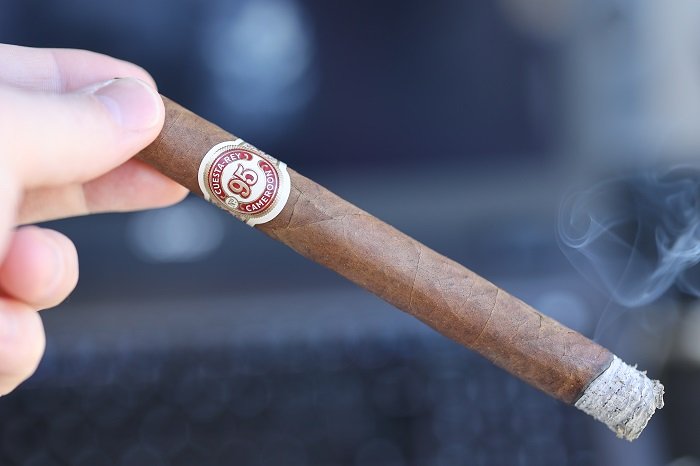 Aaron: As the second third begins, a light burning paper becomes present. At a half inch in, the burning paper note is now even with the mustiness which is right behind the toasted cedar up front. At an inch in, the baking spice has picked up. The retrohale is now an even mix of toasted cedar and mushroom mustiness. At an inch and a quarter, a light chalkiness appears. As the third wraps up, the profile is toasted cedar up front with mushroom mustiness right behind and mild amounts of earth, baking spice, burning paper and chalkiness in the background. The strength remained at mild-medium.
Seth: The second third is fairly similar to that of the first. I am picking up those hay, lemongrass, and dry earth notes. Sweet tobacco as well. Soft barnyard with that black pepper quality on the finish. Closer to medium in strength and body in this third. Lovely cigar.
John: The second third opens with chocolate, sweet tobacco, and wood that brings with it tannic accents. Pleasant, like the first third, but not really grabbing me with dynamic flavors. The end of the second third sees some char developing which fades away after the re-light.
Jiunn: The second third still holds the sweet and spicy profile but the depth of flavors increases. There’s now noticeable cedar and anise. These notes are mixed with the existing creamy and sweet bread, mixed nuts and assertive dry red pepper spice. Strength and body continues to be medium-full and medium, respectively. 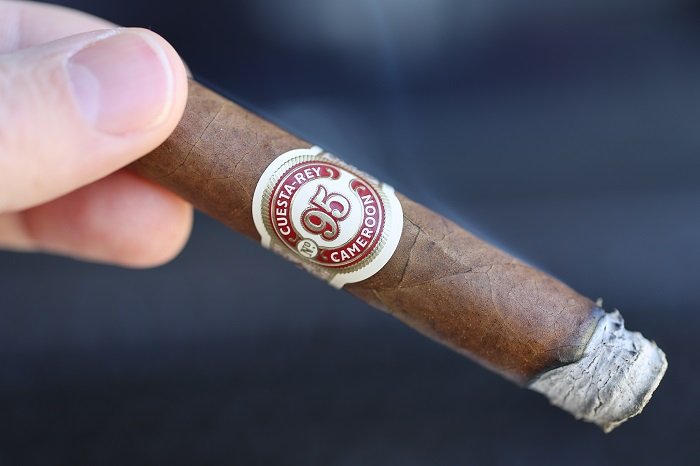 Aaron: As the final third begins, the toast level increases and a light bitterness rejoins the profile. At a half inch in, the baking spice has departed. The retrohale is now toasted cedar, mushroom mustiness and dry earth. At an inch and a quarter, the mushroom note drops from the mustiness. As the cigar wraps up, the profile is toasted cedar up front with mustiness a bit behind and dry earth, chalkiness and bitterness in the background. The strength bumped up to slightly below medium.
Seth: The final third delivered that lemongrass, hay and sweet tobacco flavors. Bits of dry earth present as well with a finish of black pepper. Medium in strength and body. Again, very balanced.
John: Sweet, nutty wood leads the cigar into the last third. Mildly tannic wood takes home in the center of the profile, lingering into the post draw over time. No other flavor development through the last third.
Jiunn: The final third shows a tad more cedar influence but that isn’t to say the other notes take a back seat (it’s more so a shuffling of flavors). Strength and body finishes the same medium-full and medium, respectively. 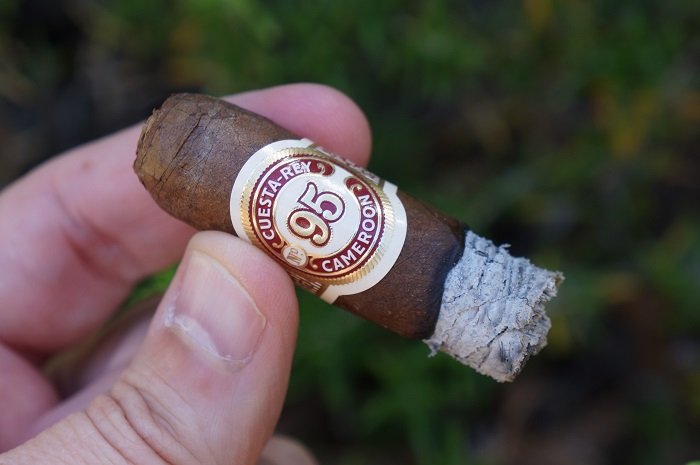 Aaron: The burn was perfectly straight throughout and the ash held on in inch and a quarter increments.
Seth: Perfect burn.
John: The burn started out straight through the first third, going out in the second third which required a re-light. The cigar went out again in the second third, requiring a second re-light.
Jiunn: Picture perfect burn performance. Even burn, solid smoke production, tight ashes and cool burning temperature. 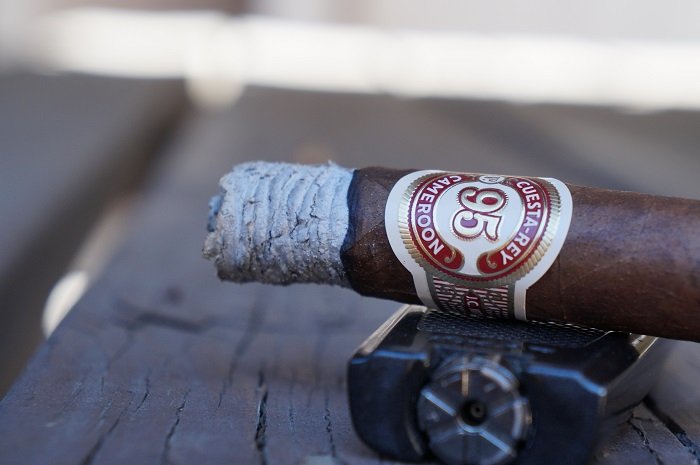 Aaron: The draw was slightly tighter than I prefer, but didn’t cause any issues with the smoking experience.
Seth: Perfect draw.
John: The draw was into the resistant spectrum, roughly 3-1/2 to 4 notches, providing snugness on the draw.
Jiunn: The draw was also perfect, providing the ideal air flow and resistance.

Aaron: The cigar began with lightly toasted cedar, mushroom mustiness and a faint bitterness. The bitterness dropped out fairly quickly as some earth and baking spice joined a bit later. The second third saw a burning paper note join and some chalkiness a bit later. The final third saw some bitterness rejoin, the mushroom note from the mustiness and the baking spice depart. The Cuesta-Rey No. 95 Cameroon took a little bit to get going but became good halfway through the first third. The second third saw a drop in enjoyment as the burning paper joined and maintained that level the rest of the way. The strength profile was fairly low. The burning paper and chalky notes held this blend back I felt. If those could go away over time, this might be a good cigar. As it sits, along with the high price point, I’d have a hard time coming back to it, but might revisit it down the road.
Seth: What a great experience reviewing this Cuesta-Rey No. 95 Cameroon. Fantastic cigar that had a great Cameroon flavor profile. Balanced throughout with amazing construction. This really had a traditional Cameroon quality in many ways, and I loved it. Shame that you can only get these at the factory, but I hope they keep them there instead of taking them national. If it smokes this good, keep it this good and make people come to the factory.
John: Overall, the Cuesta-Rey No. 95 Cameroon was a pleasant profile, but the flavors didn’t come together or provide enough depth to get my attention or engagement. The draw was resistant, and the cigar went out twice, requiring re-lights. If these were half the price they are, I would consider trying another one, but a combination of a non-dynamic flavor profile and draw with construction issues, I’d be unlikely to return to it. Total smoking time was 1 hour and 58 minutes.
Jiunn: “True” Cameroon wrappers have always been intriguing to me. There’s the ideal of where it should come from, where the best come from, and there is talk about how if it’s right, it’ll taste rich in spice and sweetness alike. But the (my) reality is, I haven’t had many good ones. Then comes this Cuesta-Rey No. 95 Cameroon. Rich, sweet, spicy and full of flavors. This was great from first to last draw. I hope to try more Cameroon wrapper blends like this. Excellent cigar.