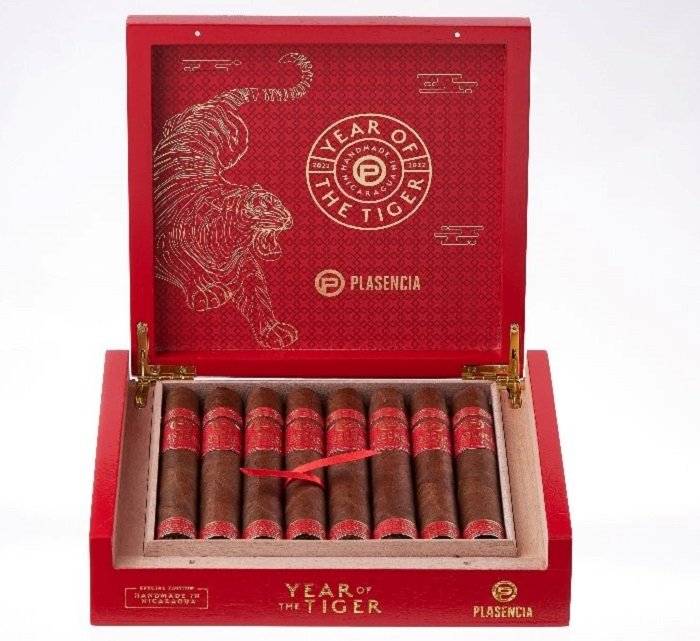 (Miami, Florida) – Plasencia Cigars, a world-leading premium tobacco grower established in 1865, announces that the limited release “Year of the Tiger” is now shipping. This launch was unveiled at the Tobacco Plus Expo which took place at the Las Vegas Convention Centerthis past January. In the Chinese Zodiac this is the Year of the Tiger and the Plascencia’s felt it apt to introduce a cigar which symbolizes values upheld by the family.

In Chinese culture the tiger represents characteristics such as determination, confidence, persistence, and is also known to be dynamic. Established in 1865 all those characteristics were needed for the company’s longevity. Being dynamic was especially relatable to the family, as to survive for well over a century, the company has had to be creative and forward-thinking to change with the times.

The Year of the Tiger is a Nicaraguan Puro with tobacco aged 10 years from the Plasencia library of tobaccos. Medium bodied, this limited release blend boasts deep and rich flavors, that only well-aged tobacco can deliver. Because of the limited availability of this aged tobacco, only 2500 boxes were created and shipped to the U.S. market.

Plasencia Cigars CEO Nestor Andres Plasencia stated: “Smooth and flavorful is the best way I can describe the Year of the Tiger. This medium strength cigar delivers notes of chocolate, nuts, and some initial spiciness.”

The Year of the Tiger carries an MSRP of $40 and comes in boxes of eight. The blend is expressed in one 6.25×54 vitola.