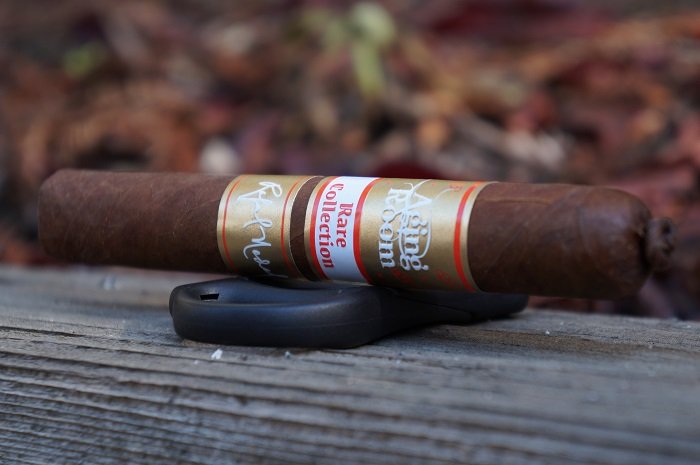 Aaron: The wrapper on the Aging Room Rare Collection Scherzo is a marbled brown in between light and medium with a network of fine veins present. The seams are smooth and the head is finished off with a tightly wound but thick pigtail. There are two bands, with the primary being gold, orange and white and denoting the brand and line. The secondary band is gold and orange and carries the signature of Rafael Nodal. The aroma from the wrapper is a mix of wood and cocoa powder. The foot brings a more concentrated version of those two components and has some added sweetness. The pre-light draw brings a musty aged cedar along with a light floral note.
Seth: Between dark Natural and Colorado in coloring, the Aging Room Rare Collection Scherzo is firm in hand and finished with a great pigtail cap. Texture is somewhat oily with fine wood shaving texture. Aromas of spices, cedar, leather and earth.
John: The Aging Room Rare Collection Scherzo comes in cellophane, with a UPC sticker that tears when the cellophane is opened. The cigar is double banded with “Rare Collection” and Rafael Nodal’s signature on it. For additional artisanal complications, the cigar has a twisted pigtail cap. Aromas from the wrapper were quite faint with sweet bread and some stone fruit. From the foot, it similarly had subdued aromas and I picked up on hay, bread, mild wood and stewed fruit.
Jiunn: The Aging Room Rare Collection Scherzo has one of the best wrappers I’ve seen. Even Colorado maduro with great oil content and toothiness. Veins are well pressed, seams tight, bunch and roll even and mini man bun head well wrapped. Aromas from the wrapper tell namely cedar and hay. Aromas from the foot tell the same but with added black pepper spice. Cold draw gives hay and cedar. 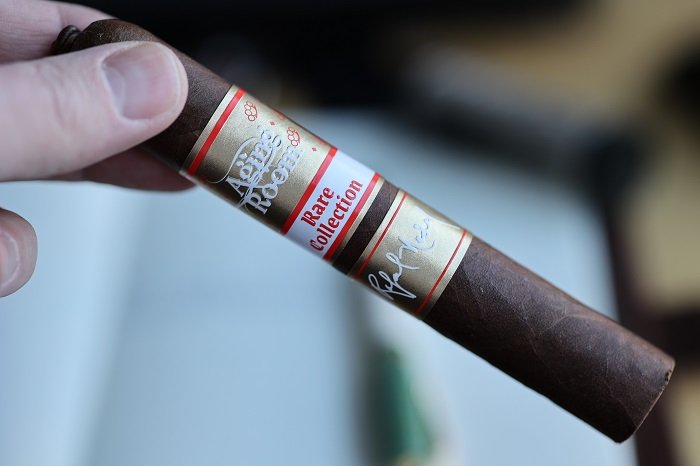 Aaron: The cigar begins with toasted cedar and light amounts of mustiness and baking spice. At a half inch in, the baking spice picks up in fullness and some earthiness joins the profile. The retrohale is musty, toasted cedar, earth and mild baking spice. At an inch in, light chalk and floral notes have joined. At an inch and a quarter, the toasted cedar and earth are even up front with mustiness a bit behind and the baking spice, chalk and floral notes in the background. As the third comes to a close, the profile is toasted cedar and earth up front with mustiness a bit behind and chalk and floral notes in the background with the baking spice having dropped out. Strength was right at medium.
Seth: The first third begins with spice and leather notes. There is a dry quality to the cigar, and the finish has some herbal and earthy qualities. Wood is present as well, and the cigar is smoking around a medium level in body, medium-full in strength.
John: The first few puffs brought flavors of baking spices, nutmeg, sweet earth and a mild toasted earth to finish. All of the flavors are initially presenting at light-plus or lower intensity levels. A delayed black pepper hits the back of my throat a few minutes in. Not longer after, some of that pepper is present on my lips. As the cigar settles in and progresses, bread and baking spices move into the center of the profile. Moving towards the halfway mark, a mild, sweet earth and wood have combined on the post draw.
Jiunn: The first third provides flavors of cedar, punchy baking spices and dry dirt. Retrohaling deepens the baking spices and also gives a creamy roasted nuts. The finish is lengthy, with tapered baking spices and dry dirt. Strength is near medium-full, and body is spot on medium. 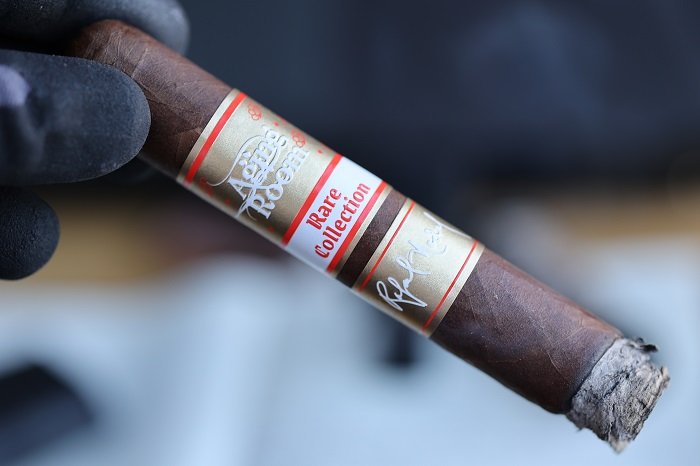 Aaron: As the second third begins, the chalkiness isn’t very full, but it is mingling up front with the toasted cedar and earth. The retrohale is musty, toasted cedar, earth and chalkiness. At an inch and a quarter, the floral note picks up slightly. As the third comes to a close, the musty, toasted cedar, dry earth and chalk are up front with the floral note in the background. The strength remained at medium.
Seth: The second third delivers a flavor profile of herbs, spices, leather and earth. Very similar to that of the first third. Medium in strength and body.
John: Mild, musty wood and bread combined to move into the second third, with dry wood on the finish. A light-plus strength baking spice and mild earth with wood medley defined the retrohale up front. A dry wood comes to define the post draw by the halfway point.
Jiunn: The second third shows no changes from the first third. It’s still cedar, punchy baking spices and dry dirt. Same retrohale, same finish, same same. Strength and body is still overall medium. 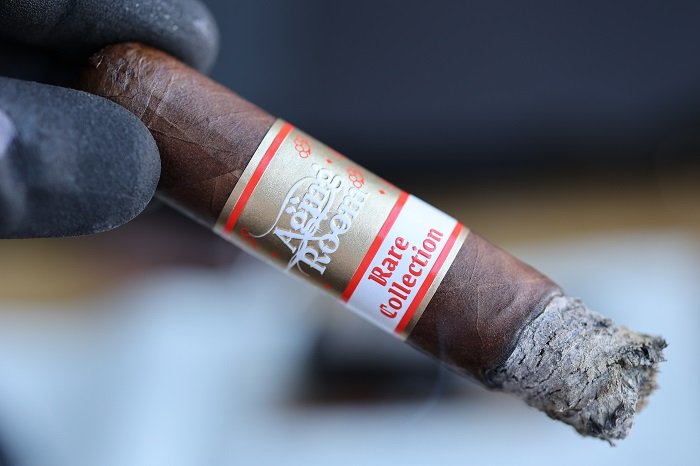 Aaron: As the final third begins, the chalkiness becomes a bit denser and the floral note morphs into a vegetal note. The retrohale remains musty, toasted cedar, earth and chalkiness. At an inch in, the vegetal note has picked up and is now just behind the components up front. The cigar wraps up with musty, toasted cedar, dry earth and chalk up front with the vegetal note right behind. The strength bumped up to slightly above medium.
Seth: Identical to that of the second third. I am picking up leather, herb, earth and spice notes. Medium in strength and body.
John: Mild wood and sweet mustiness for the first few puffs in the last third. As the cigar progressed, a light-plus tannic wood moved into the center of the profile. The dryness that has accompanied the wood is replaced by sweetness as the cigar approaches the halfway mark.
Jiunn: The final third stays true to the first two thirds in terms of flavors, but does uptick the strength to medium-full (body still medium). Flavors are still very earthy with the same cedar, baking spices and dry dirt. 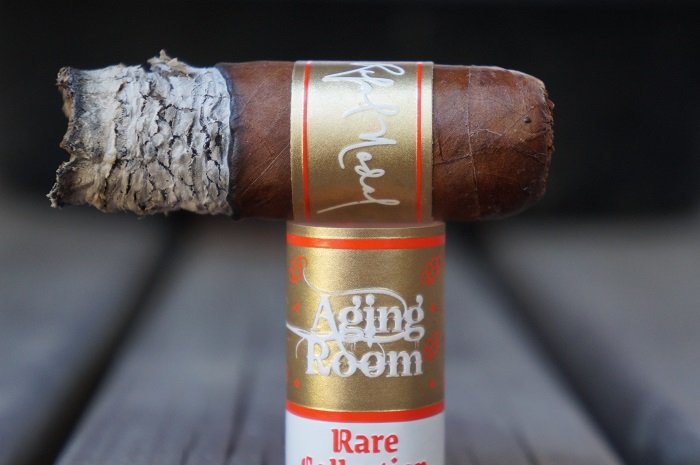 Aaron: The burn was a bit wavy at times and the cigar went out once in the second third, requiring a re-light. The ash held on in inch and a half increments.
Seth: Terrific burn.
John: The burn started out wavy, self correcting in the first third. The burn started to stall in the second third and eventually went out, requiring a re-light. The burn stalled again in the last third requiring another re-light.
Jiunn: Slight issues with the wrapper refusing to burn properly, causing a couple quick touch-ups. Aside from that, no issues noted. 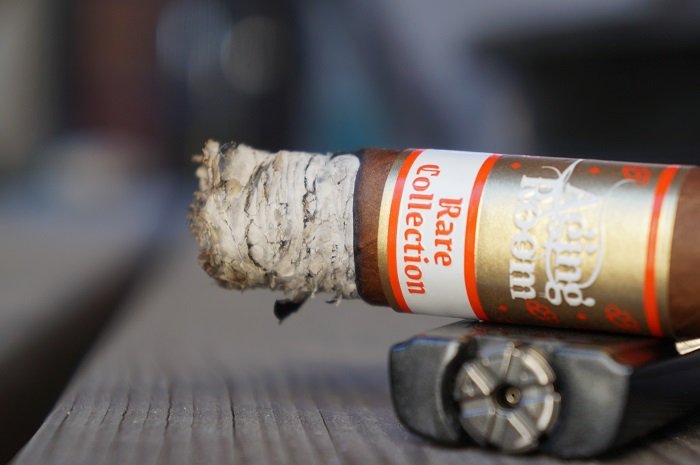 Aaron: The draw was slightly tighter than I prefer, but didn’t cause any issues with the smoking experience.
Seth: Amazing draw.
John: The draw had some resistance to it, roughly 2 to 2-1/2 notches towards the resistant spectrum. I’m unsure whether it impacted the burn, but I suspect it contributed.
Jiunn: The draw was just a tad snug, which made it just short of perfection.

Aaron: The cigar began with toasted cedar, mustiness and baking spice. Some earth joined in fairly early and then some chalk and floral notes a bit later. The baking spice dropped out at the end of the first third. The second third saw the chalkiness pick up. The final third saw the floral note morph to a vegetal note which increased throughout the third. The Aging Room Rare Collection Scherzo started well and then dropped off through each following third. Having smoked another one of these not for review, that one performed a fair amount better than this, which is a bummer. As it sits, I’d want to see how the others fared to see if the consistency is a bit better, but I might come back to this to see if I could capture the profile from the non-review sample and I’d also be interested in trying another vitola.
Seth: This was quite average for something from a Rare Collection. Average at best. I found the Aging Room Rare Collection Scherzo to be a one-dimensional offering that delivered this dry and not your classic Nicaraguan flavor profile. It really showed some Honduran qualities in some ways, and not the Honduran qualities I enjoy. The strength and body diminishing in the second and final third helped, but only because the flavor profile would have not been enjoyable with additional strength. Very expensive for the flavors delivered. Great construction.
John: The Aging Room Rare Collection Scherzo started out with an interesting mix of flavors in the first third, but through the second and last third became largely wood forward and was not dynamic enough to reach the same level of complexity as the first third. Overall pleasant, but nothing here stood out for me to be quick to return to another one. The draw had some resistance to it, and the burn struggled at times, requiring two re-lights. Total smoking time was 2 hours and 1 minute.
Jiunn: All the beauty you can ask for in terms of looks (great looking wrapper, stunning bands, man bun). But when it comes to flavor experience, it is nothing out of the ordinary. Lots of earthiness on this Aging Room Rare Collection Scherzo, being cedar, baking spices and dry dirt oriented. I’ll give it up for how consistent it is, but it no doubt lacks complexity and enjoyment for me.