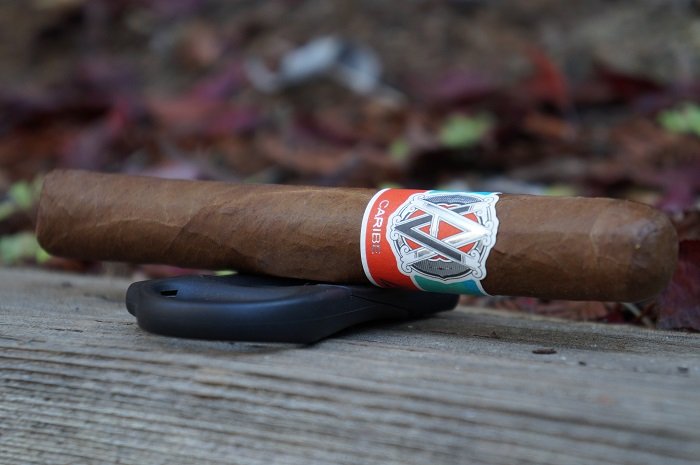 Aaron: The wrapper on the AVO Syncro Caribe Toro is a marbled medium brown and has some lightly raised veins that carry a lighter color to them. The seams are smooth while the caps are pretty well applied. The band has the traditional band design but with a color combination of pastel blues and red. The line name is also noted. The aroma from the wrapper is a mix of wood and hay while the foot brings sweet cedar and light earth. The pre-light draw brings airy, aged cedar.
Seth: The wrapper on the AVO Syncro Caribe Toro has a dark Colorado coloring. Veins throughout and rough in texture. Slightly firm to touch. Aromas of cedar, earth, cocoa and coffee beans.
John: The AVO Syncro Caribe Toro comes in cellophane, and has a UPC sticker with an integrated tear point so it remains intact when the cellophane is opened. The cigar has a single band, blue over red with silver accents. Aromas from the wrapper included mild bread, barnyard and wood. From the foot, I picked up on a lot of faint aromas including raisin, hay and wood.
Jiunn: The AVO Syncro Caribe Toro has an even Colorado Maduro wrapper shade. Major veins are exposed, seams tight but visible, bunch and roll even and head well wrapped. Aromas from the wrapper give cedar, bread and barnyard. Aromas from the foot tell the same, with added black pepper spice. Cold draw reveals a hint of both marzipan and plastic. 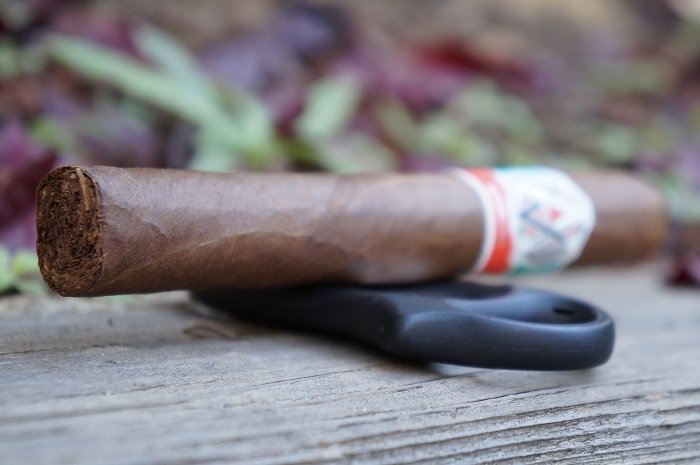 Aaron: The cigar begins with slightly musty cedar and mild black pepper. At a quarter inch in, the cedar gains a light toast. At a half inch in, the black pepper picks up slightly. The retrohale is lightly toasted cedar and very mild black pepper. At an inch and a quarter, a light chalkiness joins the profile. As the third comes to a close, the lightly musty, toasted cedar is up front, with chalkiness in the middle and the black pepper becoming very mild. The strength was slightly below medium.
Seth: The first third starts out with this creamy citrus quality that is paired with cedar. There are coffee notes present, and the finish is that of cocoa and earth. Medium in strength and body.
John: The first third opened with musty wood and a mild, lingering, tannic wood through the post draw. Mild hay is present on the retrohale, as a delayed red pepper flake hits the post draw. Mild chocolate moves into the center of the profile as it progresses. By the 25 minute mark, mild leather adds to the post draw. In the bottom half, baking spices are present on the retrohale, intermingling with the chocolate.
Jiunn: The first third has an easy going profile. There’s a lightness and airiness to the profile. Hay, soft bread, burning construction paper, stale nuts and cream are the primary notes. Retrohaling introduces a hint of cinnamon and baking spices. The finish is soft with a mixture of stale nuts and cream. Strength and body is medium. 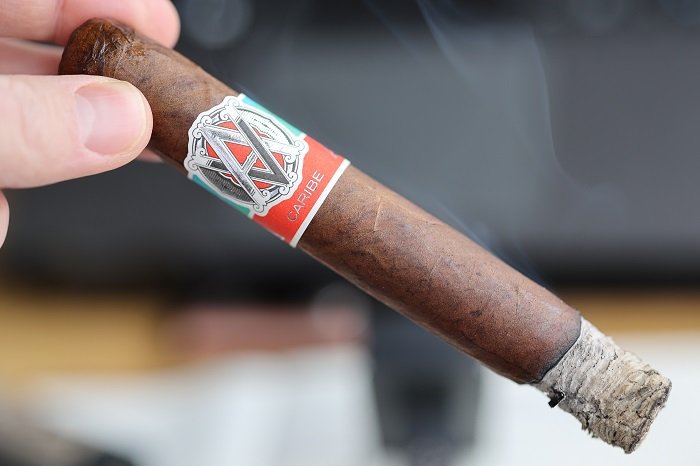 Aaron: As the second third begins, the chalkiness has become very light. At a half inch in, the toast level picks up a bit. The retrohale remains lightly toasted cedar and very mild black pepper. At an inch and a half in, the chalkiness has departed and the overall profile is a bit dry. As the third comes to a close, the lightly musty, medium toasted cedar is up front as a vegetal note is now just behind the middle and black pepper in the background. The strength in this third bumped up to medium.
Seth: The second third is really a continuation of the first third and I am picking up this citrus cream profile that has a nice coffee bean and cocoa flavor profile. Touches of earth and soft spices on the finish. Medium in strength and body.
John: Baking spices at medium-minus intensity combine with light chocolate and medium strength wood. The wood carries into the post draw, bringing spice accents with it. Dryness developed on the post draw as the second third progressed. By the halfway mark, the profile is wood forward, accented with baking spices in the center of the profile. In the bottom half, wood defines the center of the profile, along with dryness and spice notes providing that add complexity.
Jiunn: The second third picks up steam. Cinnamon and baking spices become more prevalent. Construction paper and staleness drastically dissipates, while the sweetness of dried nuts and soft bread is still intact. Strength and body is still medium. 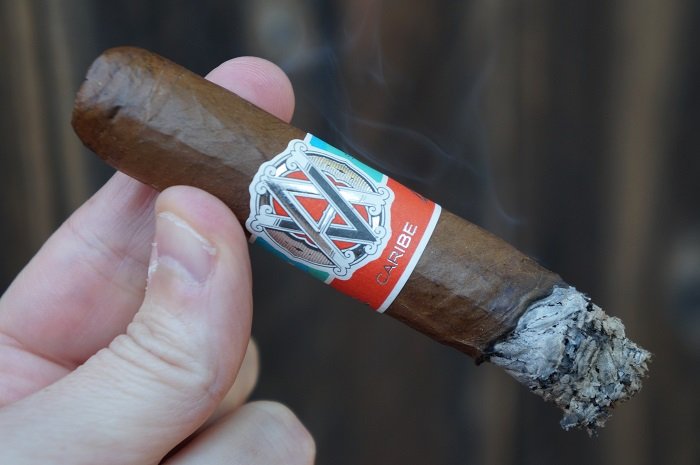 Aaron: As the final third begins, the vegetal note and black pepper are now even in the background. At a half inch in, the vegetal note picks back up to the middle of the profile as the mustiness also increases in fullness. The retrohale is now an even mix of musty, toasted cedar and vegetal note with black pepper in the background. At an inch in, the vegetal note is now even with the musty, toasted cedar up front. As the cigar wraps up, the vegetal note is slightly ahead of the musty, toasted cedar with black pepper remaining in the background. The strength bumped up to slightly above medium.
Seth: The final third delivers a profile that is somewhat in line with the first and second third but lacking overall. I am picking up some faint coffee notes, and they are paired with the cream and cedar qualities. Medium in strength and body.
John: Baking spices and a wood finish move the review into the last third. The wood lingers into the post draw with some dryness. Leather joins the wood in the post draw as the last third settles in. Some time later, mild bitterness also joins the post draw. That bitterness moves up to medium-minus intensity as it progressed.
Jiunn: The final third loses steam. The profile is less complex and enjoyable, leaving me with stale nuts and baking spices and overall dryness on the finish. Strength and body finish the same medium. 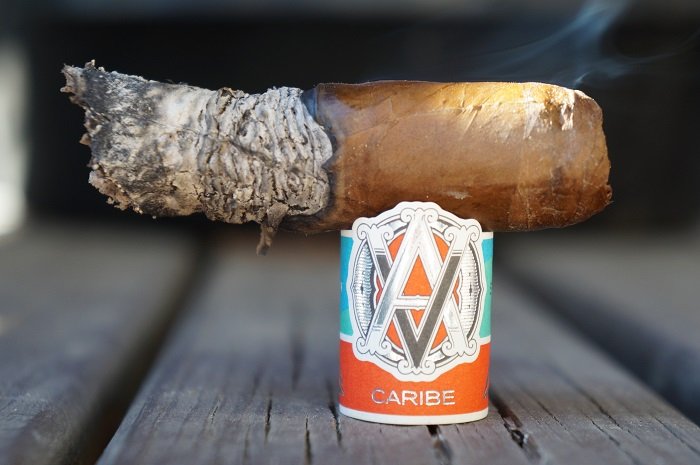 Aaron: The burn was a bit wavy throughout and required one touch-up to keep things going. The ash held on in inch and a half increments.
Seth: Great burn throughout.
John: The burn was fairly flawless, with only a small section of wrapper not burning in the first third, eventually correcting itself. The remainder of the review was straight and had no issues.
Jiunn: Perfect burn. Even burn, tight ashes, good smoke production and cool burning temperature. 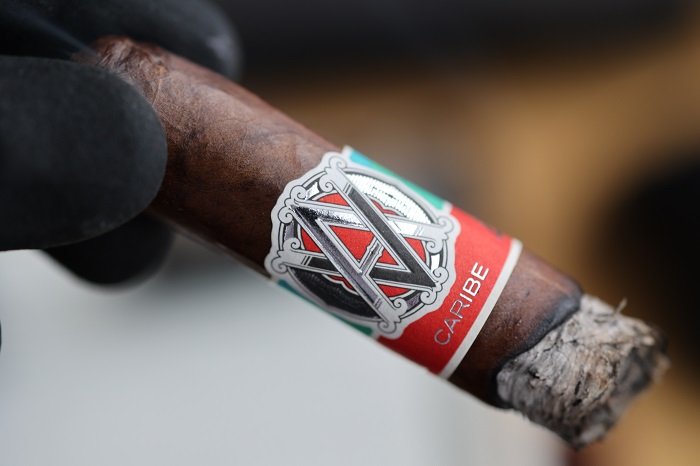 Aaron: The draw was slightly tighter than I prefer, but didn’t cause any issues with the smoking experience.
Seth: Draw was perfect.
John: The draw had a minor amount of resistance, I estimated it at one notch towards the resistant spectrum which puts it in the ideal range for draw.
Jiunn: No issues on the draw either. The right balance between air flow and resistance.

Aaron: The cigar began with musty cedar and black pepper and the cedar gained a toast note fairly quickly. Some chalkiness joined in a bit later. The chalkiness left in the second third and a vegetal note joined in. The final third saw the vegetal note build up and take the lead in the profile. The flavor profile of the AVO Syncro Caribe Toro was fairly average through the first two thirds and then took a step down in the final third when the vegetal note took over. Overall, the cigar was just OK and not something I’d likely see myself coming back to.
Seth: I was not pleased with this AVO Syncro Caribe Toro, and I often find that AVOs are hits or misses with me. I think some of their simpler/more common blends are superior to these multi-nation blends that they produce. There is nothing wrong with focusing on Dominican tobacco and minor wrapper variations. They have done it well for years. When they get into blends with tobaccos from multiple counties, they appear to be over their head. Same with Camacho. Doesn’t fully make sense either because Davidoff produces quality multi-nation blends. Nice construction and first third but went downhill quickly.
John: The AVO Syncro Caribe Toro navigated a good array of light and subtle flavors, and brought them all together in combinations that kept me engaged and interested for the entire review. The draw and burn were both flawless. I would happily smoke the AVO Syncro Caribe Toro again, and it would go on a list of AVO cigars that are noteworthy in the past few years. Total smoking time was a leisurely 2 hours and 20 minutes.
Jiunn: The AVO Syncro Caribe Toro is essentially within the expectations of what essentially all AVOs are for me; easy going flavors without overbearing strength. This blend in particular is overall average, but in comparison to the recent year’s limited editions, this is both more cost effective and more importantly, tastier. However, it is by no means as good as the core blend offerings. Stick with the core blends.