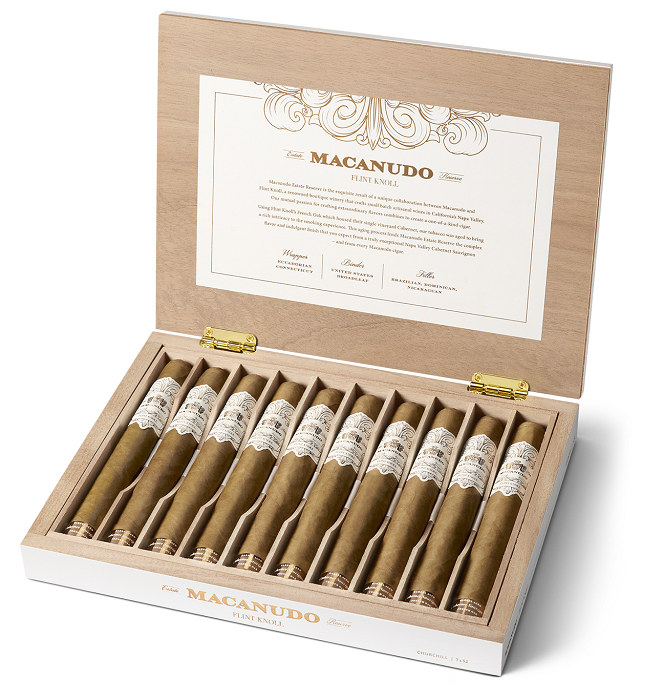 This special release draws its finesse from the French Oak barrels that age Flint Knoll’s exquisite single vineyard Cabernet Sauvignon to take the smoker on a journey through an exotic range of nuances that vary between vibrant, dense and subtle.

Handcrafted at General Cigar Dominicana, the blend is made with a curated selection of six tobaccos representing five unique countries. The exquisite smoke begins with a silky, Ecuadoran-grown Connecticut Shade wrapper leaf which was chosen for its golden sheen and nearly imperceptible vein structure. Beneath the aesthetically-pleasing wrapper sits a proprietary Connecticut Broadleaf binder leaf grown exclusively for Macanudo. The binder underwent a special aging process during which it took on characteristics of the French Oak barrels, imparting notes favored by Flint Knoll Proprietor Aaron Michaelis. When met with a blend of Brazilian Mata Fina, Dominican Olor, Nicaraguan Jalapa and Dominican Piloto Cubano, Macanudo Estate Reserve Flint Knoll delivers elevated layers of aroma and complexity.

The experience is consistently creamy on the palate and delivers hints of cedar, vanilla and toasted nuts over an undertone of charred oak which cascade to an indulgent finish.

Steve Abbot, director of marketing for Macanudo commented, “The collaboration with Flint Knoll is the first of its kind for Macanudo and gives us the opportunity to explore the synergies between cigar and winemaking. We look forward to future collaborations with Aaron and his team as we expand the notion of what it means to be a Macanudo by bringing terroir, craftsmanship and innovation to life.”

Aaron Michaelis said, “As a seasoned cigar smoker, I admire Macanudo’s ability to remain consistent and true, decade after decade, because I’ve come to learn that this is as challenging for a cigarmaker as it is for a winemaker. You can imagine that having the chance to contribute to the brand’s legacy in some small way has been nothing less than thrilling for me personally, as it has been for my team. Macanudo Estate Reserve Flint Knoll represents the desire of both brands to expand their horizons and I believe that together, we will bring increased excitement to the worlds of wine and cigars.”

Macanudo Estate Reserve Flint Knoll will be released in two sizes and available through select retailers following its October 3 ship date. The cigars are presented with white bands having deep embossing, accented in copper filigree and are packaged in handmade wooden boxes containing ten cigars each.