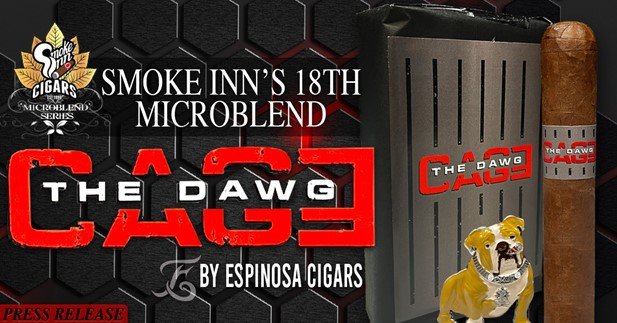 Friday September 30, 2022 — Boynton Beach, FL – Smoke Inn Cigars is proud to be partnering with Espinosa Premium Cigars for the third time in the long-running MicroBlend Series, with the Espinosa Cage the DAWG set to debut during the first week of October.

Erik Espinosa (aka the Alpha Dawg) is one of the hardest-working men in the cigar industry. Scrappy and sharp-witted, Erik often creates his best work when backed into a corner. But as the Chinese proverb goes: “Corner a dog in a dead-end street and it will turn and bite.”

Adding a new chapter to Espinosa’s fan-favorite Alpha Dawg brand (which was a crowd-sourced blend that become popular enough to receive the core-line treatment in 2016), Smoke Inn Cigars has collaborated with the Espinosa team to introduce the limited edition Cage the DAWG cigar.

Crafted out of Espinosa’s boutique-minded La Zona factory in Estelí, Cage the DAWG has been blended to offer two unique smoking profiles in one cigar! Brought about through meticulous tobacco sorting and leaf positioning within the cigar, Cage the DAWG highlights the cigar’s filler tobaccos on the initial draw and across the palate, yet the wrapper takes center stage through the retrohale.

According to Erik Espinosa, owner of Espinosa Premium Cigars, “It’s almost like two distinct smoking experiences: first the sweetness of filler, followed by the woody and peppery taste of the Ecuadorian Habano wrapper. Two unmistakable, delicious flavors in one cigar.”

Cage the DAWG is blended using an Ecuadorian Habano Rosado wrapper over all-Nicaraguan binder/fillers from the Jalapa and Condega regions of Nicaragua. The cigars were rolled in a singular 6″ x 52 toro format and packaged in 10-count paper bundles, limited to 3,000 cigars total (300 bundles). The cigars are priced at $9.50/cigar MSRP, and will debut through smokeinn.com on Wednesday, Oct. 5th at 12pm Eastern.

What happens when you Cage the DAWG? Eventually, the Alpha DAWG gets unleashed!