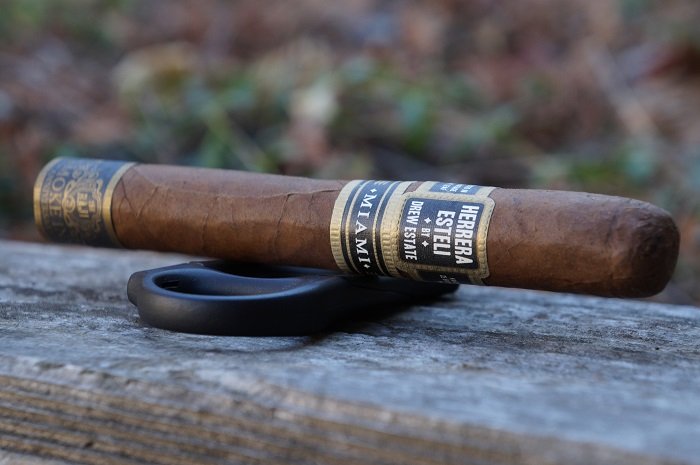 Aaron: The wrapper on the Herrera Esteli Miami Smoke Inn 25th Anniversary The Raji is between light and medium brown and carries a couple of thick but well pressed veins. The seams are a little loose while the caps are well applied. There are three bands, with the first two being black, gold and white and denoting the brand and line. The foot band is dark gray and gold and denotes it’s a Smoke Inn Anniversary cigar and also notes the designation for the anniversary. The aroma from the wrapper is a combination of damp wood and damp earth. The foot brings sweet bread and baking spice. The pre-light draw brings an airy cedar and a sweet floral note along with a mid-level spiciness on my lips.
Seth: The Herrera Esteli Miami Smoke Inn 25th Anniversary The Raji has a nice maduro colored wrapper that has some tooth and medium sized veins throughout. Nice milk chocolate bar coloring. Firm throughout, the cigar is slightly rough in texture. Aromas of chocolate, rich earth, raisins and spices.
John: The Herrera Esteli Miami Smoke Inn 25th Anniversary The Raji comes in cellophane, and has a UPC sticker with an integrated tear point so it remains intact when the cellophane is opened. The cigar is triple banded, with a primary black on gold Herrera Esteli band, a Miami secondary band and ‘The Raji Smoke Inn Anniversary’ as a foot band. Aromas from the wrapper included medium strength sweet wood, and some subtle spices underneath. There is a sweet prune and tobacco combination of aromas from the foot.
Jiunn: The Herrera Esteli Miami Smoke Inn 25th Anniversary The Raji has a uniform Colorado Maduro wrapper shade. Veins are well pressed, seams are tight, bunch and roll a bit lumpy on the first third and head is well wrapped and capped. Aromas from the wrapper tell cedar and barnyard. Aromas from the foot give dried red pepper spice, cedar and dried nuts. Cold draws give cedar, hay and a hint of apricots. 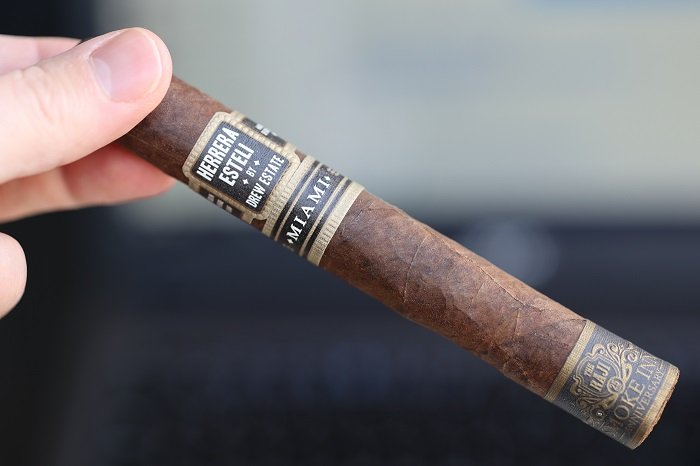 Aaron: The cigar begins with toasted cedar, punchy baking spice and light earth. At a quarter inch in, the baking spice loses the punchiness. At three quarters of an inch in, the toasted cedar has a long run before the baking spice comes in on the draws. The retrohale is toasted cedar up front with earth and baking spice a bit behind. At an inch and a half in, the baking spice and earth are now even behind the toasted oak. As the third comes to a close, the earth is now right behind the toasted cedar while the baking spice is a bit further behind. The strength was slightly above medium.
Seth: The first third starts out by delivering lots of dry earth and pepper notes. I am getting some wood and coffee bean notes as well, but it is mostly dry earth. Some mineral qualities. Medium-full in strength and body.
John: The first third opens with smoked earth and wood, with an undercurrent of sweetness, with mild earth and wood and hints of spices carrying into the post draw. As the cigar continues, creamy, toasted earth retrohale as dry spices show up on the post draw. After just a few puffs, the spices ramp up to full strength on the retrohale, and the post draw. As the first third continues, some dark molasses sweetness develops under the spices. By the 30 minute mark, the spice intensity has calmed down to medium strength. As the third continues, it settles into a dark, earthy profile.
Jiunn: Bold flavors in the first third. Plenty of dried red pepper spice gives both spice and heat. There’s also abundant cedar, gritty soil/dirt, coffee beans and a little softness in crushed mixed nuts. Retrohaling is rich with powerful dried red pepper spice and cedar. The finish shows the most amount of grit in dirt/soil, as well as a rear palate sitting dried red pepper spice. Strength is medium-full, and body is medium. 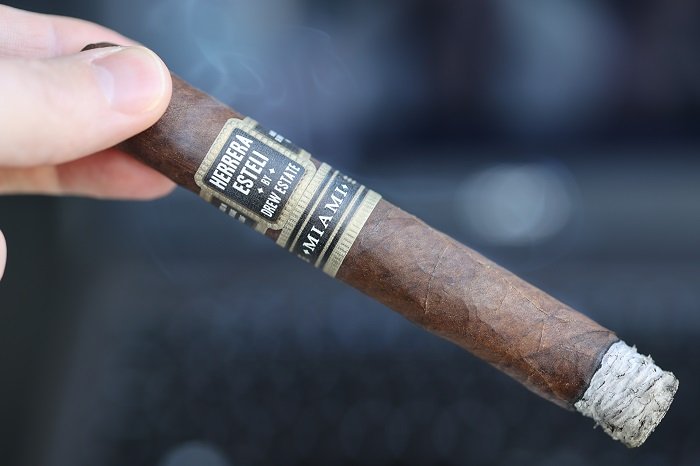 Aaron: As the second third begins, a light chalkiness joins the profile. At a half inch in, the baking spice mellows. The retrohale is now toasted cedar and dry earth with mellow baking spice. At an inch and a half in, a light creaminess joins the profile. As the third comes to a close, the toasted cedar is up front with dry earth right behind and the cream, chalkiness and baking spice in the background. The strength remained at slightly above medium.
Seth: The second third is fairly similar to that of the first third. I am getting a lot of metallic and earth notes, and they are paired with a lot of black pepper. Some dry wood notes present as well. Bits of coffee bean qualities. Medium-full in strength and body.
John: The second third kicks off with sweet, toasted earth, and a molasses sweetness and wood combining into the post draw. Not long after, medium spices come through on the post draw in a delayed fashion. As the second third settles in, it becomes again a dark, sweet, earthy profile. By the halfway point, some creaminess comes into the retrohale as medium-full strength earth defines the post draw.
Jiunn: The second third becomes more rough around the edges. There’s an overcast of char and minerals to all the existing flavors. Although this widens the flavor complexity, these notes don’t mesh well together and become less enjoyable. Strength is still medium-full and body is still medium. 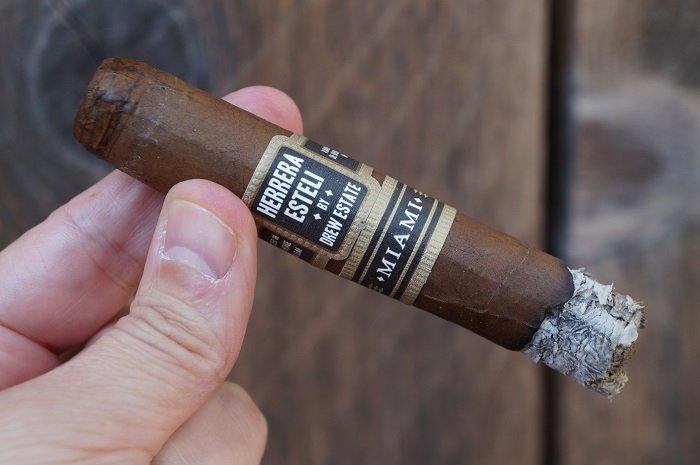 Aaron: The final third continues on with the profile from the end of the second third. At a half inch in, the creaminess has departed. The retrohale is now just toasted cedar and dry earth. As the cigar comes to a close, the profile is toasted cedar just ahead of the dry earth with chalkiness and baking spice in the background. The strength bumped up to medium-full.
Seth: The final third was right in line with the second third. I was getting a lot of dry earth and metallic notes that were paired with this strong black pepper profile. Bits of wood and coffee present as well. Medium-full in strength and body.
John: Creamy earth and wood make up the retrohale here, with medium-full loamy earth on the post draw. As the last third settles in, a creaminess joins a heavy, loamy earth on the post draw.
Jiunn: The final third’s dried red pepper spice teters down but the char and mineral are still the major flavors of the cigar. Strength and body is unchanged at medium-full and medium, respectively. 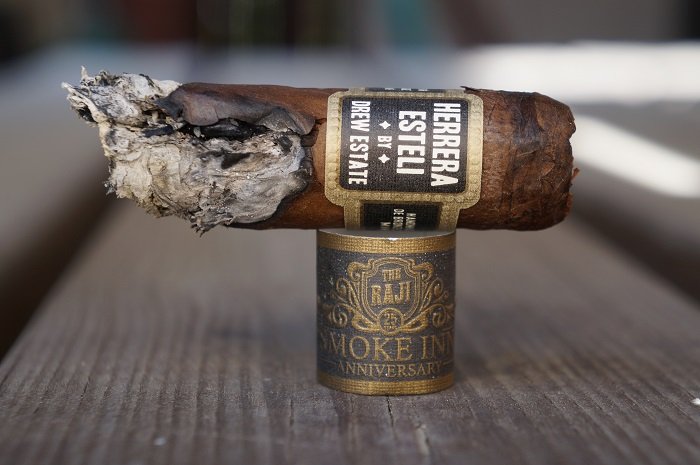 Aaron: The burn line got off significantly, twice, and I touched it up once when smoke production got low in the first third. The cigar went out two other times, requiring re-lights and seemed to struggle with smoke production through the middle third.
Seth: Burn was very good throughout.
John: As is the typical experience with Drew Estate cigars, the burn was relatively uneventful, with some minor uneven burn in the second third. The ash held on in one inch increments.
Jiunn: The only negative on the burn was a couple touch-ups required to get the wrapper burn back on track. Aside from that, no issues. 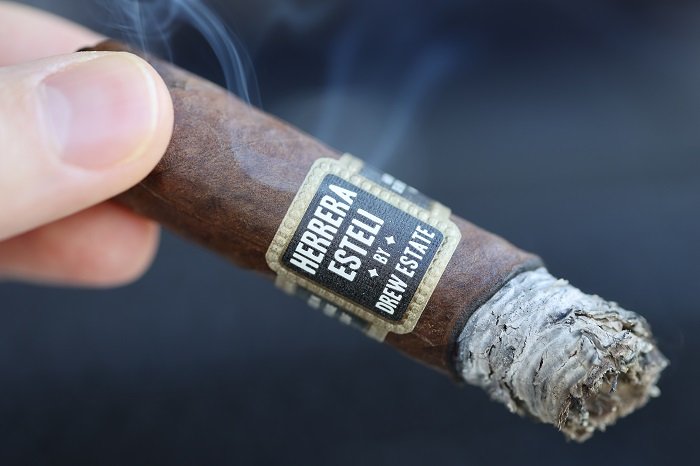 Aaron: The draw was a bit tighter than I prefer, but didn’t seem to cause any issues with the smoking experience.
Seth: Solid draw throughout.
John: The draw was perfect, right in the ideal zone between open and resistant.
Jiunn: Draw was slightly snug. Not a big issue though.