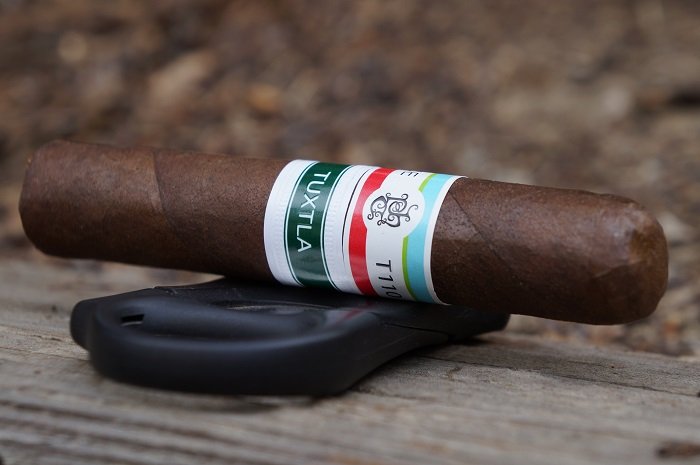 Aaron: The wrapper on the Tatuaje T110 Tuxtla is medium brown with a couple of slightly raised veins and some toothiness. The seams are slightly raised while the caps are well applied. There are two bands, with the primary being the traditional band for the line and the secondary being green and white and denoting Tuxtla. The aroma from the wrapper is wood, earth and cocoa while the foot brings the same but with added stone fruit sweetness leading the combination. The pre-light draw brings cedar and tobacco sweetness along with a very mild spiciness on my lips.
Seth: The Tatuaje T110 Tuxtla is a well constructed petit-robusto that is firm in hand. Nice triple cap with a wrapper that has very little veins present. Smooth in texture, the wrapper has a soft leather quality. The coloring is that of a light maduro, and it has this light roasted coffee bean color. It is consistent coloring throughout too. Aromas of Mexican hot chocolate, rich earth, damp wood and tobacco.
John: The Tatuaje T110 Tuxtla comes in cellophane and does not have a UPC sticker. The cigar features two bands that are seamless and appear as one band. The primary band indicates Tatuaje T110 and the secondary band indicates Tuxtla with white lettering on a green background. Aromas from the wrapper included sweet tobacco, musty wood and faint earth. From the foot, I was getting sweet hay, faint raisin and tobacco.
Jiunn: The Tatuaje T110 Tuxtla has a Colorado Maduro wrapper shade showing some great, even traces of tooth. Veins are well pressed, seams tight but visible, bunch and roll even and head well capped. Aromas from the wrapper give cedar and grimey dirt. Aromas from the foot give white pepper spice, stale cedar and hay. Cold draws reveal toasted nuts, bread and hay. 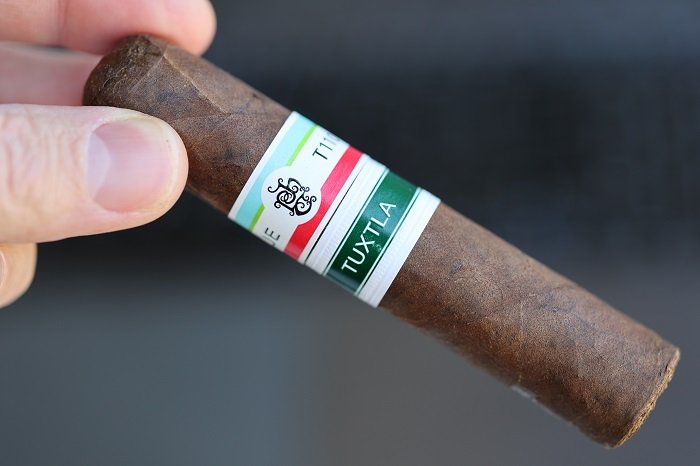 Aaron: The cigar begins with oak, dark earth and mild black pepper. At a quarter inch in, a light cocoa powder has joined. The retrohale is toasted oak, earth and lightly zingy black pepper. At three quarters of an inch in, the earth has a slight lead over the oak with the black pepper a bit behind that and cocoa powder in the background. This flavor combination holds on through the end of the third. The strength was right at medium.
Seth: The first third opens with nice Mexican hot chocolate notes that are paired with red pepper spices and grilled red meat qualities. Tobacco and oak present as well. Medium-full in strength and body.
John: I’m surprised by an initial puff of cotton candy sweetness, earth and a spicy wood finish. Spices are immediately present on the retrohale, as wood moves into the center. As the first third settles in, the spices become a more defined red pepper flake at medium-full strength, lingering between each puff. Some time later, milk chocolate moves into the retrohale.
Jiunn: The first third’s flavor profile consists of sweet brioche bread, toasted nuts, soft black pepper spice and stale and bitter cedar. Retrohaling ramps up the black pepper spice as well as creates a raw and spicy cedar. The finish is long and lingering with stale and bitter cedar. Strength and body is medium. 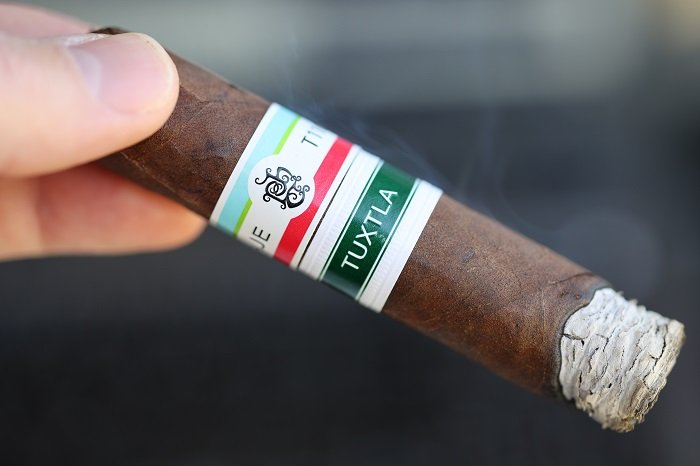 Aaron: As the second third begins, the black pepper picks up a bit. At a quarter inch in, the earth becomes a bit dry, bringing a bit of dryness to the overall profile. The retrohale is now dry earth, toasted cedar and mild black pepper. As the third comes to a close, the profile is dry earth up front with toasted oak and black pepper a bit behind and light cocoa powder in the background. The strength bumped up to slightly above medium.
Seth: The second third delivers a flavor profile that has some more earthy and mineral qualities. Lots of peppery spice notes as well. Bits of leather and oak with faded cocoa notes on the finish. Medium-full in strength and body.
John: Sweet earth and wood lead the cigar into the second third. The draw gets a lot of earth at the end which defines the post draw immediately. As it settles in, a light-plus strength spice is present just under the earth component. As the second third progresses, earth is leading the profile.
Jiunn: The second third dials down the overtly stale and bitter cedar, but the profile in general becomes quite earth dominant. Lots of cedar and gritty earth. The sweetness of the brioche bread is still intact, but it is second tier to the earthiness. Strength and body remains medium. 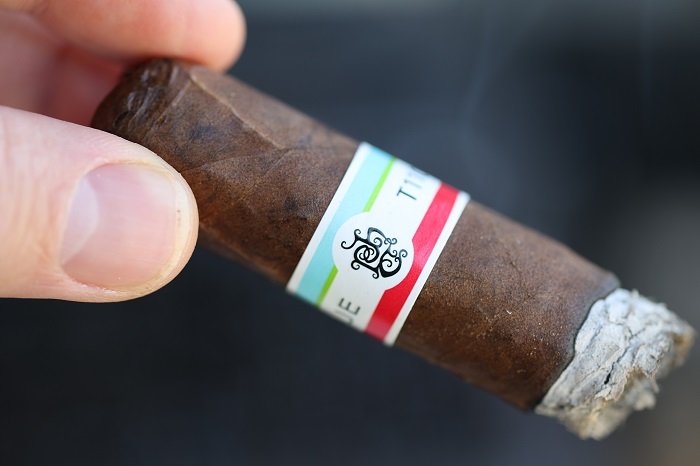 Aaron: As the final third begins, the profile becomes a bit dryer. At a quarter inch in, the cocoa powder has departed. The retrohale is now an even mix of toasted oak and dry earth with light black pepper. At a half inch in, a light creaminess joins the profile. At an inch in, the cigar warms up and brings a vegetal mintiness to the profile. As the cigar wraps up, the profile is dry earth up front with toasted oak and black pepper a bit behind with creaminess and vegetal mintiness in the background. The strength remained at slightly above medium.
Seth: The final third was in line with that of the second and I was getting mineral notes with lots of peppery spice qualities and cocoa. Bits of leather and oak on the finish. Earth as well. Medium-full in strength and body.
John: The cigar is earth forward here with a mildly dry finish into the post draw. There is no further evolution that I can pick up as earth is the primary flavor component for the remainder of the review.
Jiunn: The final third mimics the second third. Still a highly earth forward profile with cedar and gritty earth. The earthiness is incredibly long, especially on the finish. Strength and body are still the same medium. 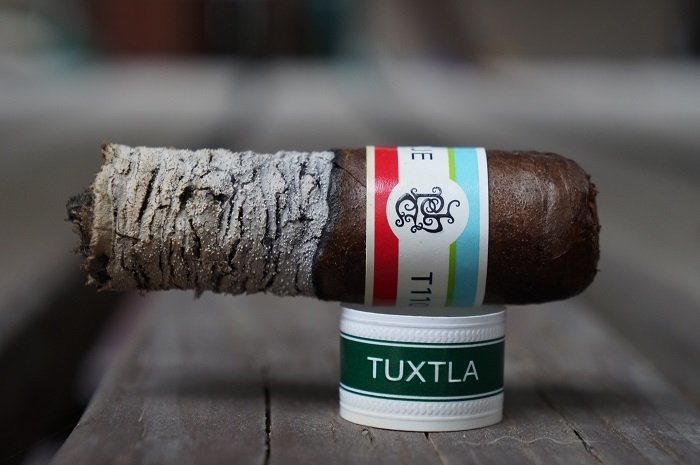 Aaron: The burn was straight throughout and the ash held on in inch and a half increments.
Seth: Perfect burn throughout.
John: The burn was slightly uneven in the first third, correcting itself. It was mildly uneven again in the second third, again requiring no intervention. The ash held on in 3/4 inch increments through the review.
Jiunn: Perfect burn. Even, ample smoke production, cool burning temperature and never needing my lighter past the initial light. 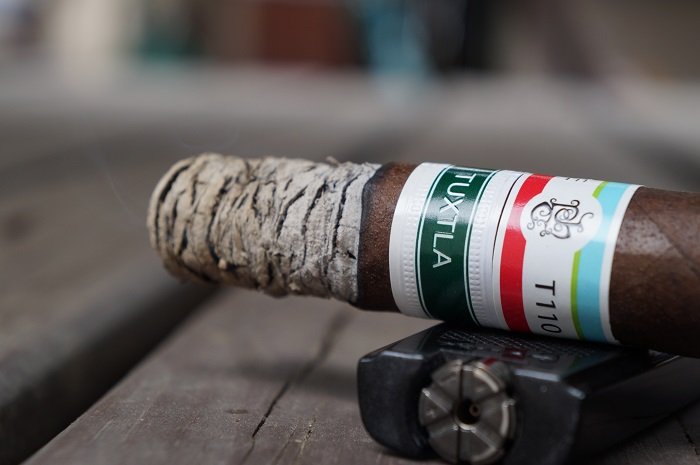 Aaron: The draw was perfect, with just the right amount of resistance that I prefer.
Seth: Great draw.
John: The draw was into the resistant spectrum somewhat, roughly 2-1/2 to 3 notches.
Jiunn: The draw was slightly snug for my liking, but overall it was a non issue.

Aaron: The cigar began with oak, dark earth and mild black pepper. A light cocoa powder joined in fairly quickly. The second third saw the earth become a bit dry. The final third saw the cocoa note depart and a light creaminess and vegetal mintiness join in. Construction was perfect. The Tatuaje T110 Tuxtla had an average flavor profile that was pretty linear. It was very earth focused and really could have used a more pronounced cocoa note to elevate it. The earth heavy profile doesn’t really do it for me, so I don’t see myself returning to this cigar, but for those that like earth forward profiles, this is probably something they’d really enjoy.
Seth: I love the T110 size, and I have enjoyed all the recent T110 releases from Tatuaje. I found this blend to be the weakest of the four, and it also had the most fluctuation in terms of performance. For the most part, all the T110’s I have smoked this year have been consistent from sample to sample. The Tuxtla had three smokes at this level, and one perform much better. I loved it when it smoked that great, but the other three smoked at this level. Nice earthy, mineral, spicy and leathery profile. Solid smoke. First third was great, and I wish it smoked like that throughout. The Mexican hot chocolate notes were awesome. Look forward to the other Tuxtla offerings.
John: The Tatuaje T110 Tuxtla came out of the gate swinging with some interesting and fuller flavor combinations that kept me on my toes. That complexity seemed to fall off rapidly moving into the second third, eventually becoming linear and flat in the last third with earth being the only standout flavor component. The draw was into the resistant spectrum, but the burn was fairly perfect through the review. The price point on these is quite reasonable and the time commitment is approachable so I would give the T110 Tuxtla another try to see if the profile was the same or improved. Total smoking time was 1 hour and 35 minutes.
Jiunn: First of the Tuxtla reviews and the Tatuaje T110 Tuxtla version is a swing and miss. The primary issue with using Mexican San Andres wrapper on this blend is the overt earthiness present. The gritty dirt, cedar, and at times staleness and bitterness of wood doesn’t mix well. I’ll take the original blend of the T110 any day over this.