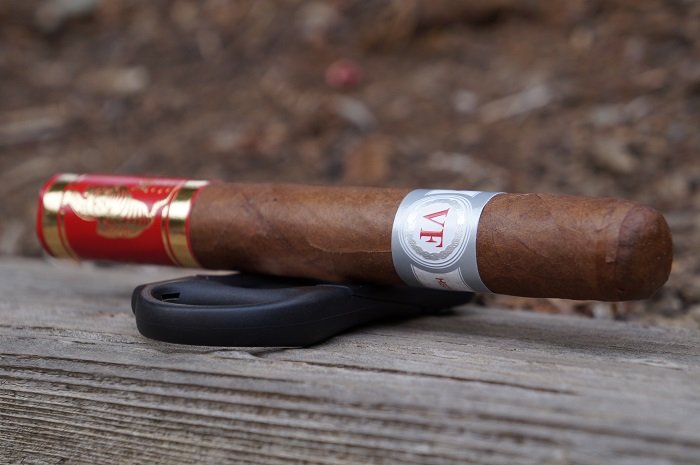 Aaron: The wrapper on the VegaFina Year of the Tiger 2022 is medium brown and has some raised veins present as well as some veins beneath protruding. The seams are a bit raised while the caps are well applied. There are two bands, with the primary being the traditional silver, white and red for the brand while the foot sleeve is red and gold with an image of a tiger on the front, the text of the year on one side and the numerical year on the other side. The aroma from the wrapper is a mix of wood and black tea while the foot brings cedar and breadiness. The pre-light draw is a mix of cedar and black tea along with a light spicy tingle on my lips.
Seth: The VegaFina Year of the Tiger 2022 is firm throughout and lovely in apperance. Bands are simple but well done, and the cigar has a lovely Colorado coloring. Really light red clay coloring. Clay that has been dried out in the sun. Very small marbling with the veins. Veins are small in size. Firm cigar. Lovely aromas of sweet spices, tobacco and cherries.
John: The VegaFina Year of the Tiger 2022 comes in cellophane, and has a UPC sticker that tears in half when the cellophane is opened. The cigar is double banded with a VegaFina primary band, and a red on gold foot band indicating ‘Year Of The Tiger 2022’. Unfortunately, on closer inspection, there appears to be a minor crack near the cap, and the cap split further once I cut it. I failed to capture pre-light aromas as I was focused on the cap and whether I’d be able to get the cigar to draw for the review.
Jiunn: The VegaFina Year of the Tiger 2022 has a smooth and even Colorado shade. Veins are well pressed, seams tight, bunch and roll even and head finished neatly. Aromas from the wrapper tell of rich barnyard and nuttiness. Aromas from the foot give the same, but with greater intensities. Cold draw gives cedar, hay and nuts. 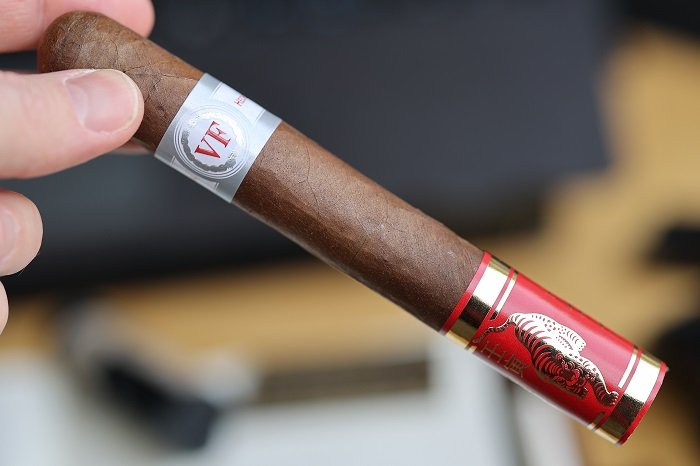 Aaron: The cigar begins with toasted cedar and mild black pepper. At a quarter inch in, a light burning paper note has joined the profile. At three quarters of an inch in, a light, dry earth joins. The retrohale is toasted cedar along with a light burning paper note. At an inch and a half in, some mustiness has joined the profile while the pepper is now very faint. As the third comes to a close, the profile is musty, toasted cedar up front, dry earth right behind and pepper and burning paper in the background. The strength is slightly below medium.
Seth: The first third starts out with lovely light spice notes. Asian spice qualities. Bits of cedar, leather, dry earth and stone fruit present. Mineral qualities, and some faint cocoa powder notes. Medium to medium-full in strength and body. Great burn.
John: The first third starts out promising with graham cracker, honey and baking spices at medium strength through the end of the draw and into the post draw. A mild earth and leather settle into the post draw after just a few puffs. The overall profile comes off quite mild, but balanced and enjoyable. By the halfway mark, chocolate is present on the retrohale.
Jiunn: The first third showcases a nice balance of flavors. No spikes, as flavors of cedar, dry red pepper spice, cedar, minerals and mixed nuts all play well with each other. Retrohaling gives greater influence in minerals and dry red pepper spice. The finish is long, with a mixture of cedar and nuts. Strength and body is medium. 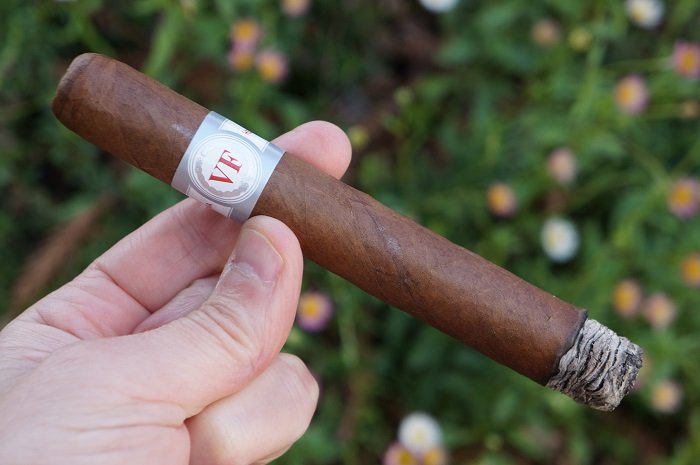 Aaron: As the second third begins, the burning paper note has departed. At a half inch in, the black pepper has increased in fullness. The retrohale is musty, toasted cedar and mild black pepper. As the third comes to a close, the profile is musty, toasted cedar up front with dry earth and black pepper a bit behind. The strength remained at slightly below medium.
Seth: The second third was right in line with the first third. I was picking up sweet spice notes, soft stone fruit and cocoa qualities, minerals, cedar, leather and dry earth. Medium to medium-full in strength and body.
John: The second third opens with hay, graham cracker and mild wood. Hay and wood combine with mild earth on the post draw. As it progresses, sweet hay settles into the center of the profile. By the halfway point, graham cracker and hay are driving the profile. In the bottom half, there’s an earthy finish that lingers between draws.
Jiunn: The second third continues to be balanced. The profile has more minerals and cedar, while still holding the other notes of dry red pepper spice and mixed nuts. Strength increases to medium-full, while body stays medium. 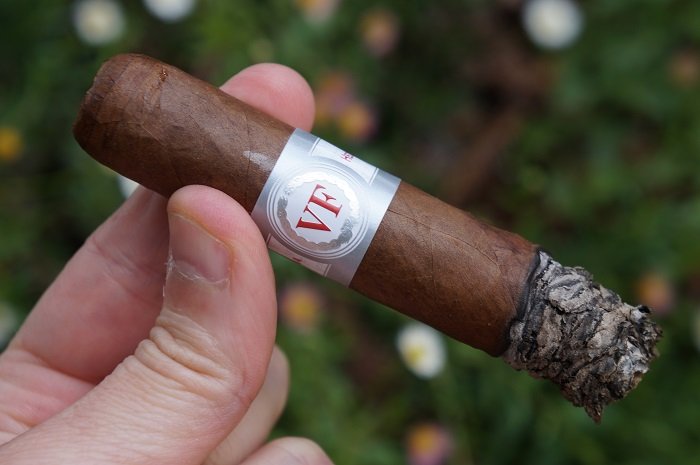 Aaron: As the final third begins, the toast level increases. The retrohale is musty, toasted cedar with black pepper that is a bit fuller now. At an inch in, the black pepper is now between the musty, toasted cedar and dry earth. The cigar wraps up with musty, heavily toasted cedar slightly ahead of the black pepper and dry earth a bit further behind. The strength bumped up to medium.
Seth: The final third was nice, but not what the first and second third were. More mineral notes. Less cocoa and stone fruit qualities. Spices, leather, cedar, dry earth. Medium to medium-full in strength and body.
John: Hay combines with mild, dry wood on the finish here. As it settles in, earth takes over the post draw and is the dominant flavor between each puff. The post draw takes on some acrid tones as it progresses and becomes quite distracting.
Jiunn: The final third tips the balance by showing too much minerals, giving the profile a tinny note. This note overshadows the other flavors. Strength and body is unchanged at medium-full and medium, respectively. 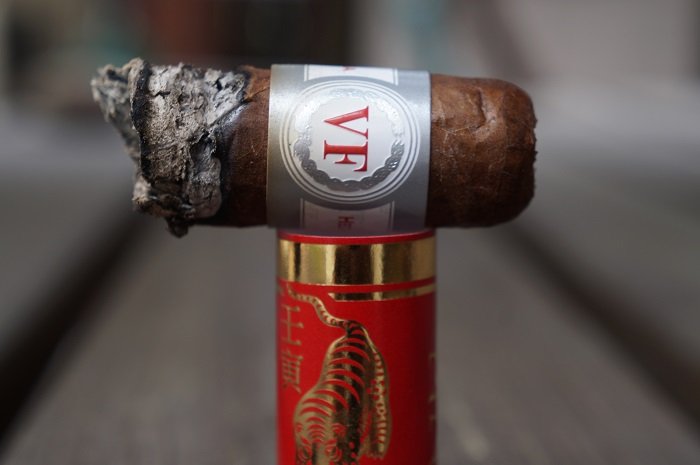 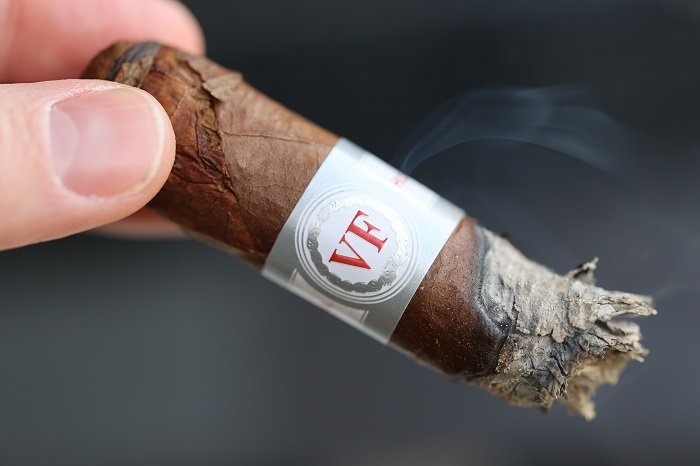 Aaron: The cigar began with toasted cedar and mild black pepper. A burning paper note joined in fairly quickly and then mustiness and dry earth a bit later. The second third saw the burning paper depart and the black pepper pick up. The final third saw the toast level increase as well as the black pepper. The VegaFina Year of the Tiger 2022 started off average as the burning paper note was a bit of a detractor, but once it departed in the second third, it became more enjoyable. It fell off again in the final third with the heavy toast. This is the most affordable of the Year of the Tigers, and probably the one I would recommend that people try, even though, on it’s own, it’s probably not a cigar I would come back to all that often.
Seth: I enjoyed the VegaFina Year of the Tiger 2022. I thought the first two thirds were good, and the cigar would have been much better if it had a final third like the first. Still, a good cigar overall. Really good price! I liked the blend and the body and strength that came with that. Never too much, and in some ways scaled back while still having some flavors. Might not be everyone’s cup of tea, but I enjoyed it. I do think it could and should be better, but still a good cigar overall.
John: The VegaFina Year of the Tiger 2022 started out quite promising with subtle and nuanced flavors through the first third that seemed blended for a European palate. That complexity became unbalanced through the second third, albeit still pleasant. The last third came apart on me as some bitterness took over and distracted me for the remainder of the review. The burn and draw were flawless. If the second third carried the same balance and flavor profile as the first third, this cigar would have done quite well. With that said, the price point is still approachable so it’s worth another pass. Total smoking time was 2 hours exactly.
Jiunn: Overall, I enjoyed the well balanced and full flavored experience of the VegaFina Year of the Tiger 2022. However, I could have enjoyed it more if the wrapper wasn’t so fragile. From the onset of taking off the foot band, the wrapper immediately cracked. When the wrapper burned in unison with the other leaves, there was a noticeable richness/fullness of flavors. With all that said, I’ll still gladly smoke more even with a pesky burn performance.