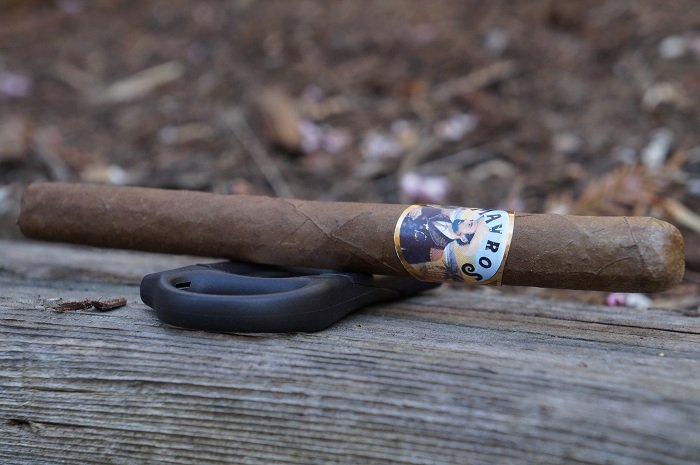 Aaron: The wrapper on the Mavros Revolucionarios Especiales is pretty rustic with a light brown color and some decently raised, knotty veins. The seams are fairly smooth while the head is finished fairly with what looks to be a double cap. The band is gold and pale burgundy and has the company name and a picture of a man on the front. The aroma from the wrapper is a light mix of fire cured tobacco and Vicks VapoRub. The foot brings a fuller mix of fire cured tobacco and cedar. The pre-light draw brings a really nice light fire cured tobacco note.
Seth: You do not charge $25.00 and then present a cigar in this manner. I said the same thing about the Lars Teten releases. The wrapper on the Mavros Revolucionarios Especiales has this terrible faded brown color, as it looks like it has been left in the sun for about six months and been manhandled periodically. There are medium sized veins present throughout. The wrapper is smooth in texture and it has a give throughout when squeezed. Not a good give. The aroma is of mesquite barbeque, earth, spices and cedar.
John: One of the first things I picked out on the pre-light experience for the Mavros Revolucionarios Especiales is that the cellophane reminds me of the inexpensive cellophane used on bundle or short filled cigars. There is no UPC or cigar brand sticker present on the cellophane. Examining the cigar, it had a lumpy appearance throughout. The wrapper wasn’t uniform in color and had bands of mottling throughout. Aromas from the cgar included intense barnyard and hay. From the foot, I was able to pick out light wood.
Jiunn: The Mavros Revolucionarios Especiales isn’t a very good looking cigar. The first thing I notice is the greenish brown dull wrapper and single cap head. The next thing I recognize is the cheap looking band. This entire presentation looks like those fake glass top Habanos cigars. The bunch and wrap does feel fine though, so at least that’s partially redeeming. Aromas from the wrapper give construction paper. Aromas from the foot give construction paper and dry musty basement. Cold draw reveals stale cedar and nuts. 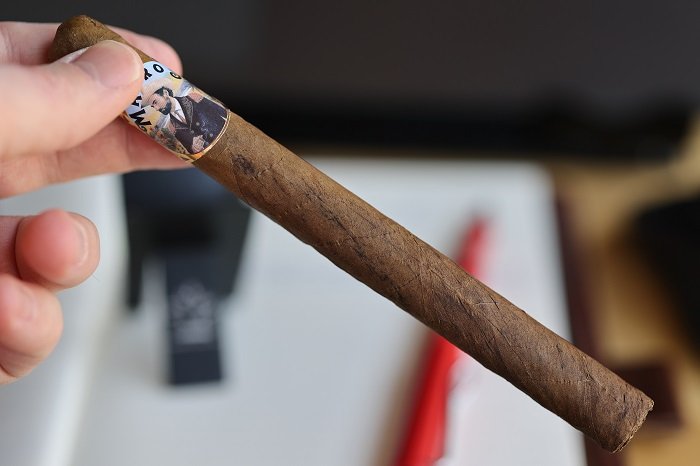 Aaron: The cigar begins with a smoky wood (not fire cured) and light black pepper mix. At an inch in, the smoky wood becomes quite heavy on the palate. The retrohale brings a lighter version of the smoky wood. At an inch and a half, the smoky wood isn’t as heavy and has gone back to how the cigar started. The strength in this third was slightly below medium.
Seth: The first third opens with some manure and dry earth notes. There are some cedar qualities present as well, and it has some hay, coffee and lemon peel on the finish. There are some fresh grass qualities present as well, and I would classify the cigar as being between mild and medium in strength and body.
John: My first third review experience started with sweetness, light tobacco, trailing earth and cedar that carried into the post draw. As the cigar progressed, hay joined the post draw and brought with it some mild tannins and sweetness. By the bottom half, an acrid note developed on the post draw, and started to grow moving towards the second third.
Jiunn: The first third gives off a unique and odd main flavor from first puff. There’s a dehydrated vegetable note that is bitter and sharp. Other than that, there’s cedar and stale dried nuts. Retrohaling gives a mixture of minerals, baking spices and cedar. The finish carries forth the sharp and bitter dehydrated vegetable note. Strength and body is medium. 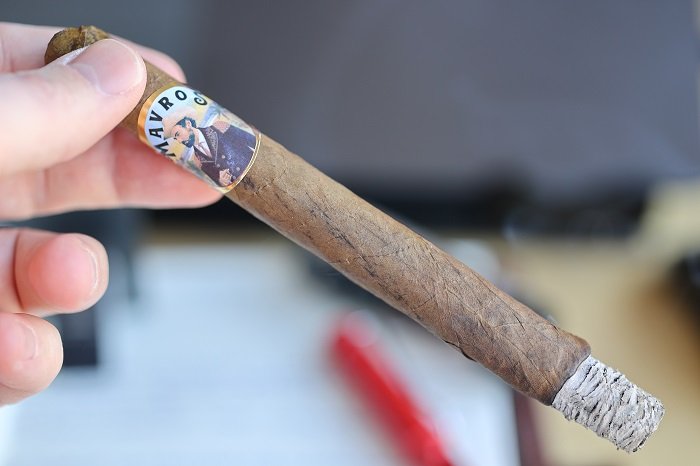 Aaron: The second third continues on with the smoky wood and light black pepper. At a half inch in, a light earthiness joins in and there is a slight mintiness on the finish. The retrohale is now smoky wood and light earth. At an inch in, the black pepper is no longer detectable. The third wraps up with the smoky wood and light earth. The strength in this third dropped down to mild-medium.
Seth: The second third shows no change from the first third. I am picking up manure, coffee, lemon peel and hay notes. There are cedar qualities present as well and it is a smooth cigar. Like before, it is somewhere between mild and medium in strength and body.
John: The second third came out of the gate with hay, mild sweetness and mild acrid tannins that finished into the post draw. Hay was the primary driver as it settled in, with some bitter accents. As the second third progressed, mild chocolate came through on the retrohale.
Jiunn: As I smoke through the second third, I’m able to better identify that odd and unique flavor. It’s tasting like chrysanthemum tea that’s been sitting in hot water for too long, creating a highly herbal and bitter component, yet barely holding onto the floral aspect of it. This note is honestly very invasive on the palate, lingering on for minutes on end. Strength and body is medium. 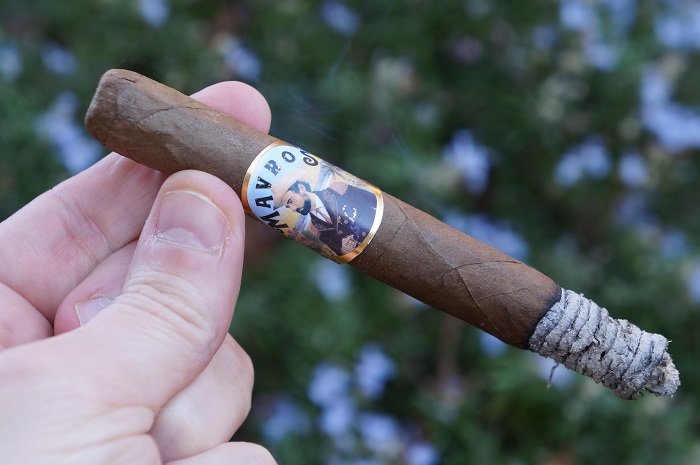 Aaron: As the final third begins, an interesting vegetal mustiness joins the profile. At a half inch in, the finish has morphed from the mintiness to a bitterness. The retrohale remains smoky wood and light earth. At an inch in, a char joins the smoky wood which creates a heavier and longer bitter finish. The cigar wraps up with the smoky charred wood, musty vegetal note and light earth with a bitter finish. The strength in this third moved back up to slightly below medium.
Seth: The final third delivers a flavor profile where the cedar and lemon peel notes are more prominent. I am still getting some hay and earth notes, and there are touches of coffee bean notes as well. Like the first and second third, the cigar is smoking just between a mild and medium level.
John: A mild chocolate and hay was at the forefront of the profile, with a bitter hay that carried into the post draw. There were no other evolutions through the final third.
Jiunn: The last third picks up a synthetic artificial sweetener like Sweet’N Low. But the bitter and herbal chrysanthemum tea is still in full force, being long and lingering. Strength and body finishes the same medium. 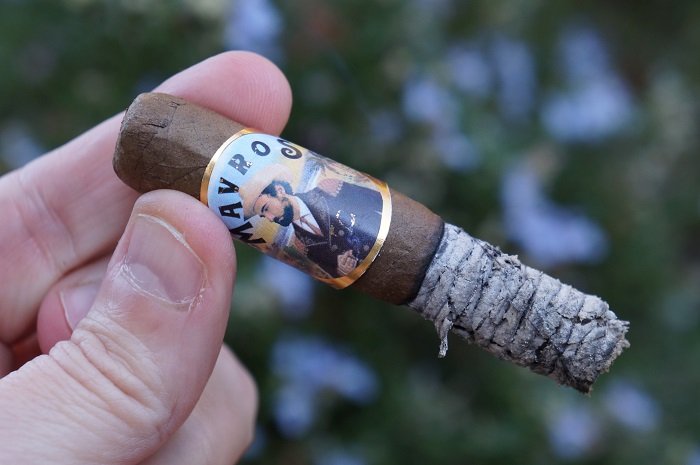 Aaron: The burn was straight the entire way. The ash held on in inch and a quarter increments.
Seth: Very good burn from start to finish.
John: The burn started out straight, with the wrapper beginning to unravel from the foot roughly two inches in. Ash held on fairly well up to two inches.
Jiunn: Burn performance was perfect. Even burn, cool burning temperature and never needing my lighter past the initial light. 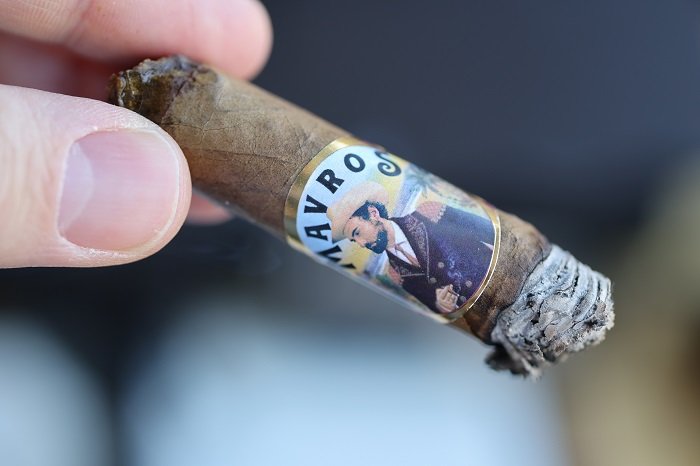 Aaron: The draw was slightly looser than I prefer, but didn’t cause any issues with the smoking experience.
Seth: Draw was a little loose, so the cigar smoked quickly. I was happy for that.
John: The draw had some resistance to it, roughly 2 to 2-1/2 notches into the resistant spectrum, putting it in the good category.
Jiunn: The draw was a tad snug for my liking, but still considered very good.

Aaron: The cigar was a fairly basic and average experience, although unique, centered around smoky wood with black pepper early on and then light earth later. Things finished on a down note with char and bitterness. I was intrigued by the Mavros Revolucionarios Especiales from it being a new brand, originating from Mexico and the story behind it. The price point is quite high, and I see that being a bit of a barrier for people trying it. Based on my experience, I don’t see coming back to it, especially at the price point, but I am glad I got a chance to try it.
Seth: While the flavors were not terrible on this cigar, at no point did I find the Mavros Revolucionarios Especiales grabbing my attention or really making a pop. I do not think the flavors will be to the liking of many, and I know that if someone buys this cigar they will be disappointed. It smoked like an old-school bundle cigar.
John: The Mavros Revolucionarios Especiales did not deliver an enjoyable experience overall for me. The first third was average, but the profile began to fall apart by the halfway point of the first third. The acrid and unbalanced flavors made the second and last thirds challenging to smoke through. The draw had some resistance to it, and the burn was fine, with the wrapper beginning to unravel from the foot during the review. This is not a cigar I would likely try again. I can only assume the MSRP for the cigar is tied to high tobacco taxes in its market. Total smoking time was 1 hour and 37 minutes.
Jiunn: Do you enjoy chrysanthemum tea that has been steeped too long, creating high levels of herbal and bitter notes? If you answered yes, then allow me to link you to some websites so that you can purchase an ounce of loose tea leaves for $15. I just saved you $10 from this cigar. You are welcome. Minor joking aside, I really can’t get behind this Mavros Revolucionarios Especiales given the subpar pre-light presentation and smoking experience for $25. It’s honestly not even worth the price tag of a budget cigar. Who is the marketing target for this cigar? Puzzled.