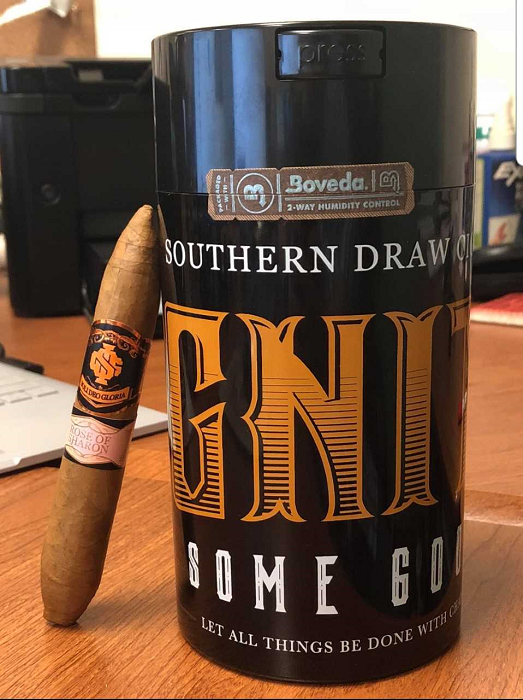 Austin, Texas – APRIL 30, 2018. IGNITE project release #2 will be an exciting new size for the award winning Rose of Sharon. The medium bodied blend that was represented on my top cigar lists of 2017 will now be offered in a special round format.

Each perfecto is 6×56 and will offer its own custom IGNITE band. The perfectos will be presented in two custom, limited edition humi-jars of 10 cigars each. The exclusive jars were authorized for use by founding sponsor Famous Smoke Shop, the nation’s #1 discount retailer of premium cigars online. The jars display the words “IGNITE SOME GOOD” along with a decal on the top representing the designated charity for the Rose of Sharon Perfecto. Operation Cigars for Warriors was selected by Famous Smoke Shop and Southern Draw Cigars. Inside each jar is an informational brochure about the charity, a coupon for a future order from Famous and a 2-way humidity packet supplied by Boveda, Inc. who is also a sponsor of the IGNITE project.

The official IGNITE Rose of Sharon release event will take place on Saturday, May 12th, 2018 at Leaf Cigar Bar & Restaurant located on the Famous Smoke Shop premises at 90 Mort Drive, Easton, PA 18040. Additionally, the new release will be available for purchase either online or in-store during the May 12 event. Details and a direct link to purchase the perfectos will be posted on event day for those that cannot attend the event and desire to support the charity and the new release.

“IGNITE release #2 holds a very special meaning at Southern Draw, as the Famous Smoke Shop family joins us once again this time to IGNITE some good as we bring another exciting new cigar to the market. Famous is the source of our custom branded IGNITE humi-jars and their dedication to charity and support continues to be a blessing to our growing little brand,” said Robert Holt, Chief Evangelist of Southern Draw Cigars. The Rose of Sharon Perfecto is the 5th new release of 2018 for Southern Draw following the most recent Jacobs Ladder Lancero, Firethorn and Kudzu Perfecto 6×56 box press and the Rose of Sharon Lancero.