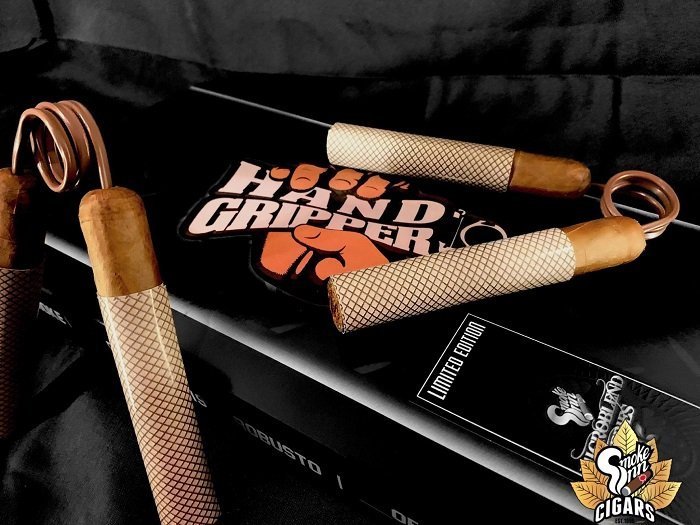 Friday, January 25, 2019- Boynton Beach, Florida – Smoke Inn has collaborated with MoyaRuiz Cigars to introduce the 13th installment of their popular Microblend ™ Series. For this unique collaboration Smoke Inn asked MoyaRuiz Cigars for something extremely creative and unique. Some of their popular limited releases have been off the wall and even controversial , who better to ask! Their answer was simple The Hand Gripper! Two cigars connected together in order to resemble an actual pair of forearm flexing hand grippers. Size of the cigar will be a 5 x 52 robusto featuring an Ecuadorian Habano oscuro wrapper with a binder and fillers from Nicaragua. Only 300 numbered boxes were produced in the La Zona factory in Esteli, Nicaragua containing 12 cigars or (6 pairs of hand grippers) at an MSRP of $99.00 per box. The Hand Gripper will be released at Smoke Inn’s annual mega cigar event, The Great Smoke, February 16th, which will be held at the South Florida Fairgrounds in West Palm Beach, FL . Remaining boxes after the event will be available to the general public through their retail stores on February 18th and will be available online, www.smokeinn.com at Noon EST.

Danny Moya of Moya Ruiz Cigars, commented “For us the concept was simple, let’s create something that’s never been done before. We are the only company that has a utility patent to be able to connect two cigars together so we came up with The Hand Gripper. As a small company to be a part of Smoke Inn’s Microblend™ Series is a dream come true. We are honored to join some of the great cigar companies that are part of this series. We couldn’t be more thankful to Abe and the entire Smoke Inn team for supporting us since day one. “

Cigar News: MoyaRuiz The Hand Gripper is the Next Smoke Inn Microblend Series