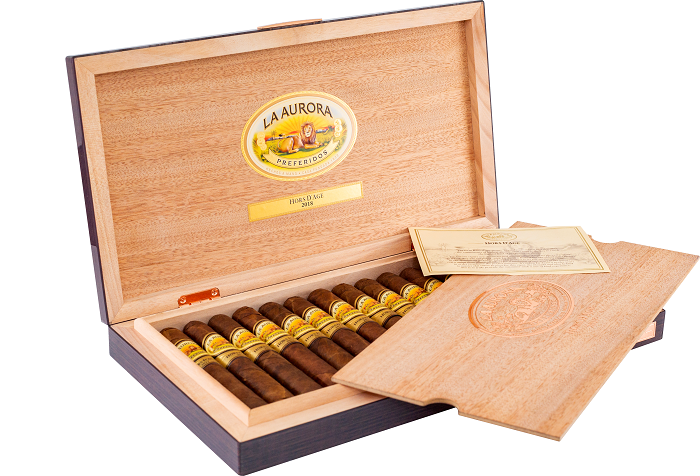 La Aurora Cigars has announced that after their very successful introduction of the initial Hors d’Age 2017 Limited Edition at last year’s IPCPR, the next version will be featured at the upcoming IPCPR trade show in La Vegas, Nevada.

“Hors d’Age is a homage to the time-honored practice of extra-aging fine spirits,” stated Guillermo Leon,La Aurora Cigars Owner and President. “We have painstakingly selected twelve-year-old vintage tobaccos to once again create what we believe is a spectacular blend. While the amount of available tobacco that meets our criteria to become Preferidos Hors d’Age is very limited, we have what I believe to be one of our greatest achievements in this line. The year noted on each Hors d’Age says when each blend started it’s extra-aging process, as this process ensures complexity and amazing flavor in a blend that is still beautifully refined and true to our defining what Dominican cigars should be.”

La Aurora Preferidos Hors d’Age will be available in 500 15-count boxes for the US market, and only in 6×54 toro. The blend of Ecuadorian wrapper and binder, with Cibao Valley, Colombian, and Nicaraguan fillers will retail at a suggest retail price of $22 per cigar.

La Aurora Preferidos Hors d’Age will be on display at the Miami Cigar & Company IPCPR booth (#3038) and will be on presale, with an expected ship date of September 2019.