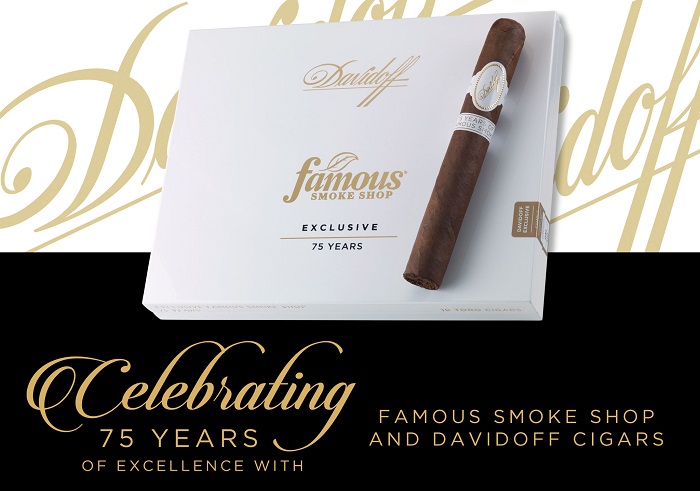 EASTON, PA – Famous Smoke Shop, the leading online distributor of discounted premium cigars, specializing in offering the web’s widest selection of cigars at the lowest prices has just announced the arrival of the Davidoff Famous 75th Anniversary cigar. Blended exclusively for Famous Smoke Shop, this limited edition cigar, of which only 500 boxes were produced, is offered in one size, a 6″ x 50 Toro format with a secondary band that reads: “75 Years of Famous Smoke Shop,” and is sure to become a collector’s item.

The Davidoff Famous 75th Anniversary cigar is one of several special editions made for Famous Smoke Shop by some of the world’s leading cigar manufacturers to honor the retailer’s 75th year in business, including Romeo y Julieta, and Padrón cigars, with more in the works.

“Everything about this cigar is special,” said Jim Charnley, Famous Smoke Shop’s Director of Purchasing & Merchandising. “Davidoff and Famous have always stood for offering cigar smokers the very best in quality and selection, and being a Davidoff Appointed Merchant, we’re proud to have a limited edition Davidoff cigar we can now call our own.” 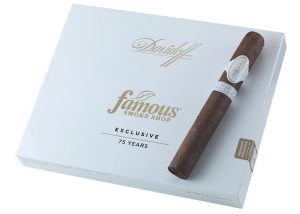 The cigar offers a full-flavored blend of specially-aged long-fillers from the Dominican Republic and Nicaragua embraced by a Mexican San Andrés Negro binder, and finished in a flawless, dark-natural Habano wrapper grown in Ecuador. The smoke, itself, issues notes of earthy berries, cocoa, cedar, and spice on a long and luxuriously creamy finish.

“Smooth, with a mellow bite – right in my wheelhouse,” said John Pullo, Managing Editor for CigarAdvisor.com. “The chance to sit and enjoy a smoke like this Davidoff comes along once in a lifetime – glad this 75th Anniversary happened during mine.”