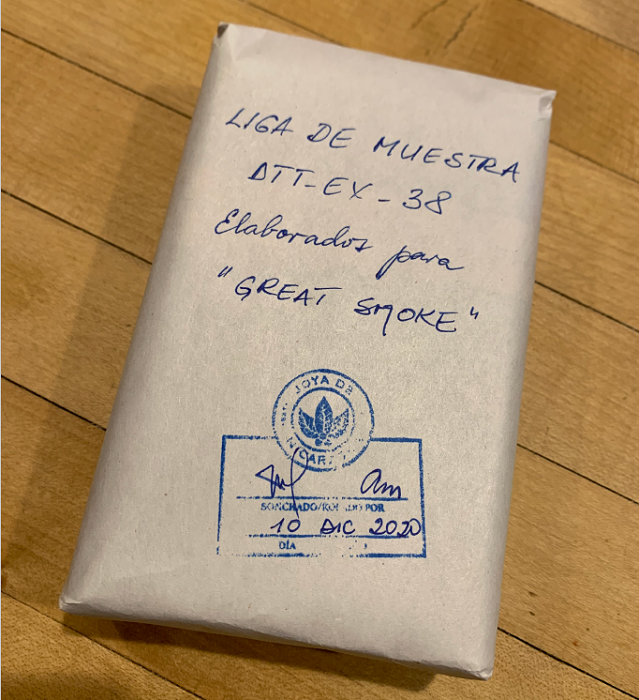 DTT-EX-38 is a sample liga Steve Saka has been working on since 2016. It incorporates a seldom grown leaf of Costa Rican Morron, which is a derivative of a Negro leaf seed strain grown primarily as wrapper. His goal behind the blend was to incorporate the smaller corona leaves as a unique ligero into the tripa recipe due to its chocolate and softer pepper notes. The “EX” stands for “extraterrestrial”, and the “38” is the number of variations he has crafted to date trying to tweak it to best exemplify the Morron ligero. The blend has remained dormant for two years and remains a “work in progress”, but was crafted in a very limited batch exclusively for The Great Smoke.

Tasting Notes per Steve Saka: A robust liga of chocolate, raisins and a sweet and soft red pepper. The morron adds a unique flavor and aroma profile almost no smokers in the US have ever had the opportunity to try. There is a peculiar, yet pleasing mustiness to this tobacco that is very different. Presented in a wide corona format for the experienced smoker.

The cigar comes in a 5×46 parejo vitola with a pig tail. It is limited production with only 200 10 count bundles available. The price is estimated to be $13.45 per cigar, but actual pricing will be announced during the event. It is planned that these cigars will be made available during Steve Saka’s LIVE On-Air Appearance during The Great Smoke 2021 on Saturday, February 20th at approximately 4:55pm.