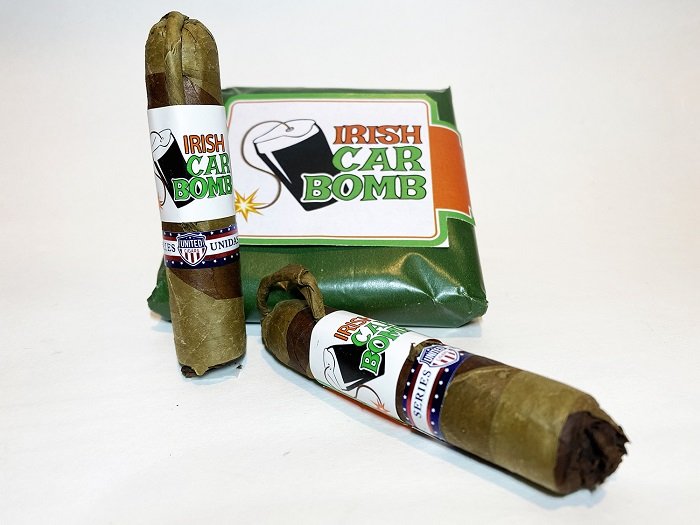 Nashua, NH – With Spring approaching and clovers sprouting, United Cigars has a little more to share than just Irish well wishes. Expanding on their limited release offerings that were saved for Independence Day, United Cigars has started to expand on the popularity of the United Firecracker line that has been finding its way into more and more retail outlets. To celebrate this year’s St. Patrick’s Day festivities why not pour a green beer and light up the Irish Car Bomb Firecracker that features a candela and maduro barber pole, finished with the unmistakable wick that Firecracker is known for.

“Cigars are meant to be celebrated with friends and smiles,” said Oliver Nivaud Director of Operations for United Cigars. “The rich and creamy draw on this limited release, barber pole Firecracker is perfect. So let’s raise a pint this St. Paddy’s Day and light up an Irish Car Bomb Firecracker.”

Production on the Irish Car Bomb was limited to under 15,000 cigars featuring a Dominican Candela and Mexican San Andres wrapper, finished off with a candela wick. The binder is Nicauguan Criollo with Dominican Ligero, Nicaraguan and Pennsylvanian Broadleaf fillers. Production was started late last year at the Magia Cubana Factory in Gurabo, Republica Dominicana to prepare for a St. Patrick’s Day Firecracker parade of smoke.

Irish Car Bombs will be sold as 5 packs with an MSRP of $30 and ship to retailers at the end of February. Firecrackers are known for their explosive flavors in a small offering and the Irish Car Bomb Firecracker will not disappoint as a 3 x 50 vitola.