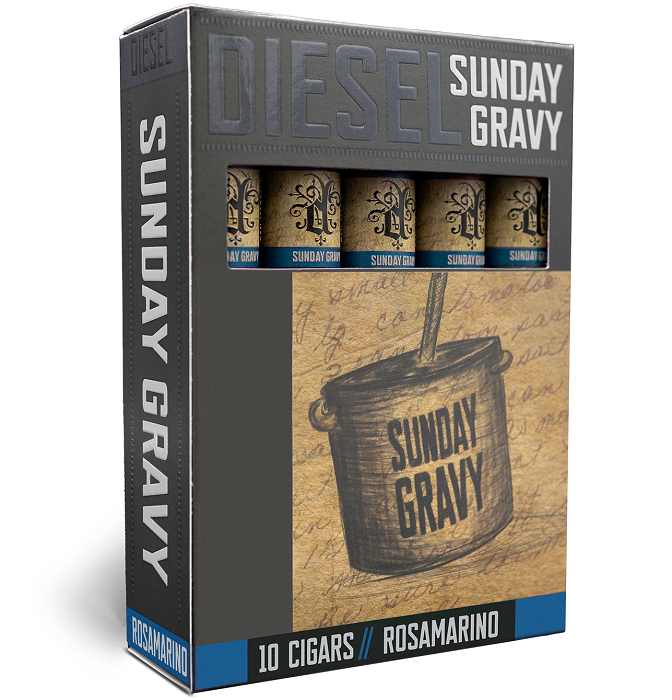 Diesel is rolling out its third Sunday Gravy release with “Rosamarino,” a Nicaraguan puro made with premium tobacco from the country’s main growing regions.

In a nod to the layered smoking experience this blend delivers, Rosamarino takes its name from the Italian translation of rosemary, a popular herb that lends complexity to any dish in which it appears.

Justin Andrews said, “When AJ and I develop blends for the Sunday Gravy series, we bring our opinions to the table, and we go head to head on which tobaccos we’re going to use. Ultimately, AJ wins when it comes to delivering a bold smoke, and I get my way when it comes to delivering on balance. With Rosamarino we’ve shown how the optimal ratio of tobaccos in a blend can deliver a cigar that can appeal to a wide range of cigar smokers.”
Rosamarino is being released in a toro size only, which both AJ and Justin agree is the best expression of the blend. This release is being offered at an SRP of just under $5.00 per cigar, making it an affordable indulgence for a variety of smokers.

Diesel Sunday Gravy Rosamarino will be available nationally from February-March 2022, or until the cigars are sold out. The next Sunday Gravy blend will be released in April, 2022.