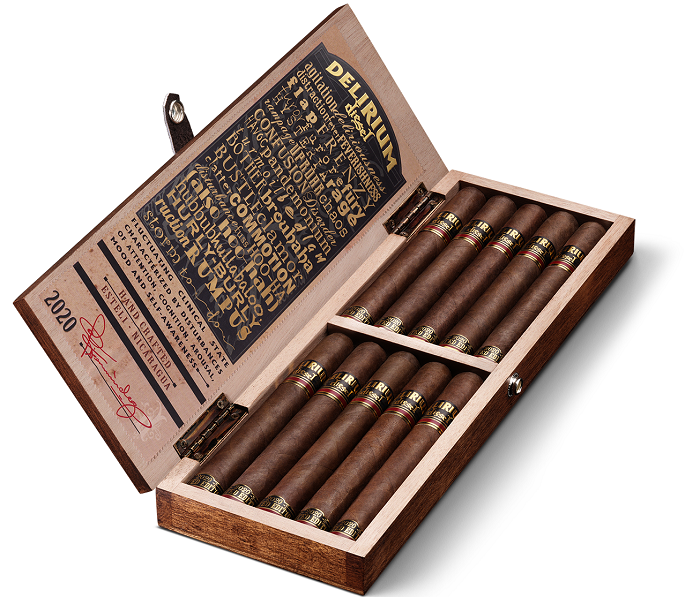 Diesel is set to roll out “Delirium,” a limited-edition offering of the boldest Diesel blend to date. Only 5,000 boxes have been made and will be released in early March.

Delirium follows the Diesel’s Hair of the Dog (2019) which sold out in under three weeks.

Senior Brand Manager Justin Andrews said, “Diesel Delirium is about disruption. It’s a cigar that demands the smoker’s full attention and while it follows Hair of the Dog, the two blends couldn’t be more different. Delirium’s definitely powerhouse of a smoke, but it’s not just that. It’s also about dimension and balance, and that begins and ends with the blend we developed. This is a cigar that we recommend enjoying when you have time to commit to really experiencing the full spectrum of taste it delivers.”

Blended by AJ Fernandez, handcrafted at Tabacalera AJ Fernandez in Esteli, Nicaragua and developed by Justin Andrews, Delirium is made with an Ecuadoran Sumatra wrapper, a Connecticut Broadleaf binder and a blend of Nicaraguan ligero and Ometepe. A cigar for the initiated, Delirium is a peppery smoke that delivers an array of spices, with hints of nuts and an unexpected touch of nougat on the palate.

Diesel Delirium is available in one size Toro (6” x 52) which will sell for an SRP of $10.00 per cigar. The cigars are presented in rustic, ten-count wooden boxes with two compartments, each containing five cigars. The 5,000 cigar release will hit stores on March 2 and is expected to be an almost instant sell out.

Launched in 2014, the original Diesel Delirium was introduced by Cigars International and was only available for a short time. The updated blend reflects the popularity of cigars that are both full-bodied and complex.