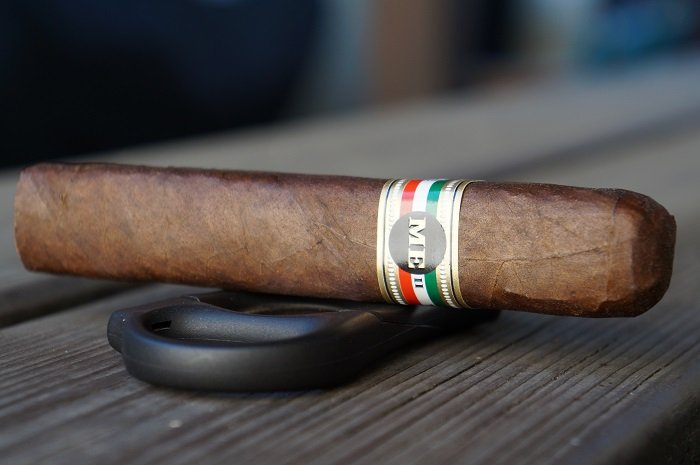 The Tatuaje ME II Robusto has a rectangle press with a wrapper that is on the darker side of medium brown. There are a few slightly raised veins present and the seams are easily visible as they are slightly raised as well. The head is finished off with a well applied triple cap. The band has the colors of the Mexican flag with gold borders and a black circle with the letters ME in it and the Roman numerals for two next to it. The aroma from the wrapper is a mix of dark cocoa powder and dark earth. The foot brings dark cocoa powder, black pepper and a subtle note of dark earth. The pre-light draw is light wood and a floral perfume along with a mild spiciness on my lips. 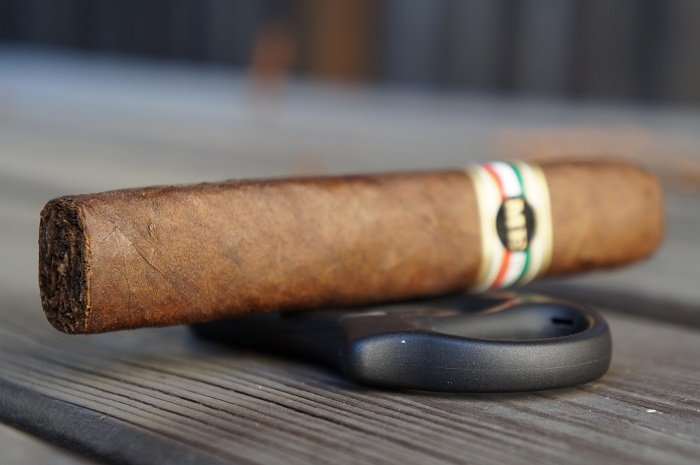 The Tatuaje ME II Robusto is heavy in hand and beautifully pressed. It has a great cap and the coloring is that of a solid maduro. It has a nice dark milk chocolate coloring and the wrapper has some grittiness. There are a few veins present here and there, and the aroma of if dark rich chocolate cake, rich earth, sweet spices, strong tobacco and damp wood. 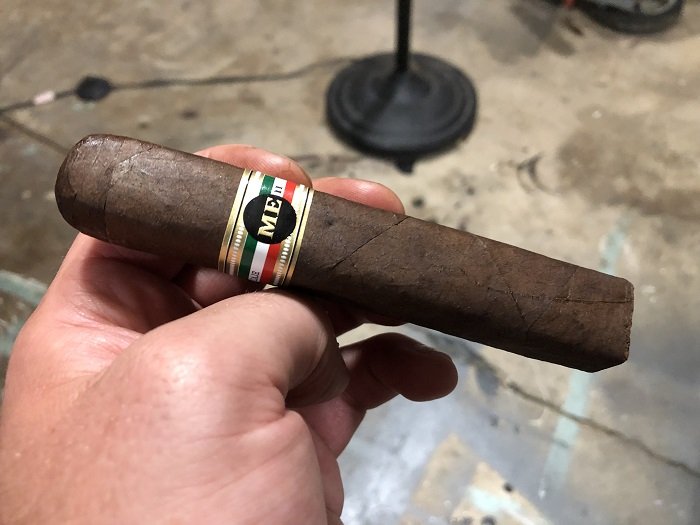 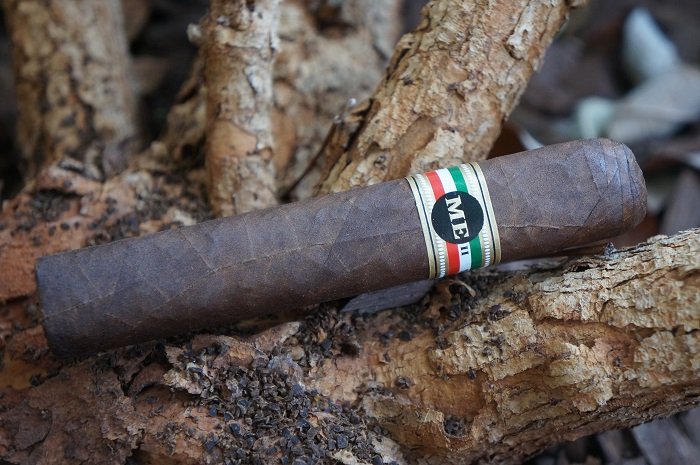 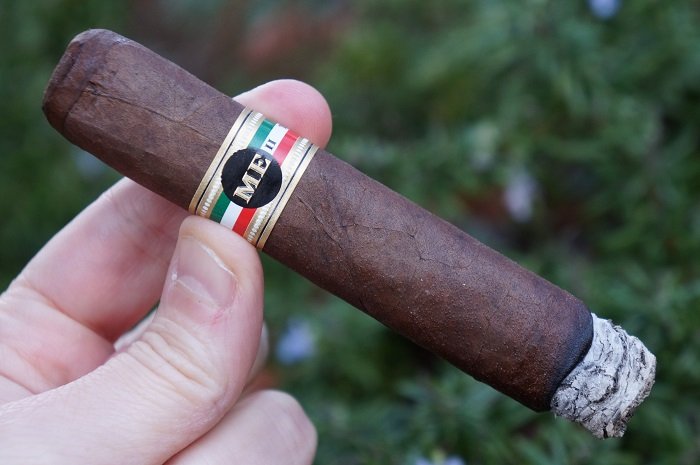 The first third opens up with some strong spices and dark cocoa powder There are rich earth qualities present as well, it has that dark chocolate cake vibe, and I am picking up strong tobacco notes on the finish. There is a pepper and woodiness quality also present on the finish and it is a solid start to the cigar. I would classify the cigar as being a solid full in strength and body, and the flavors are there as well. 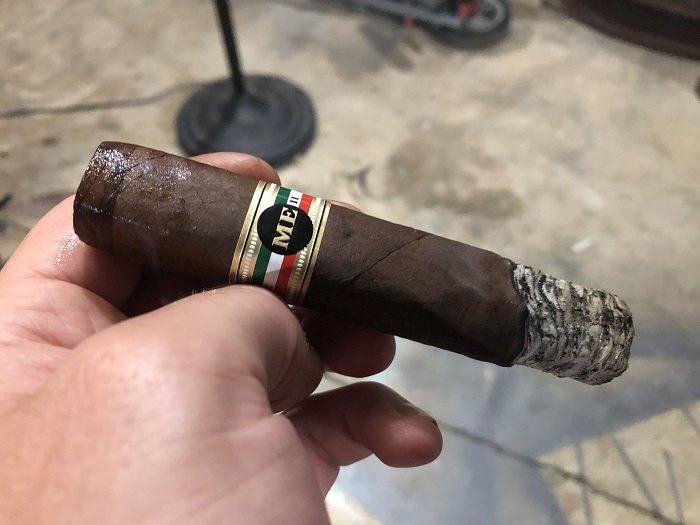 The first third is earth forward, giving notes of dirt/soil, cedar and leather. There’s more than that though, there’s also kitchen baking spices, cinnamon and cream. Retrohaling gives greater presence in a spicy cinnamon and cedar. The finish is cedar and grippy tannins on the sides of the tongue. Strength and body is medium. 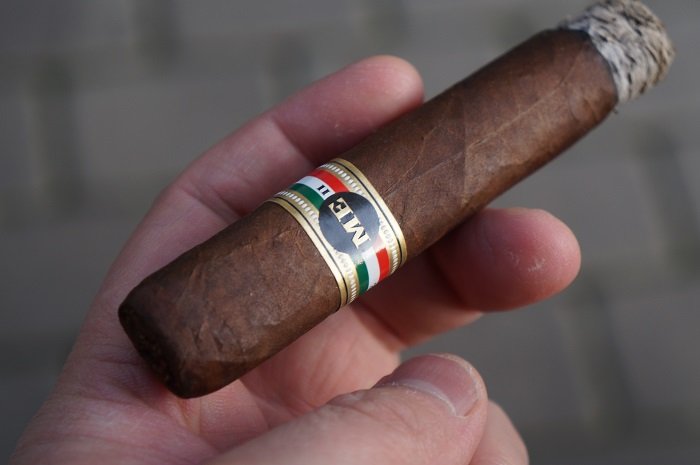 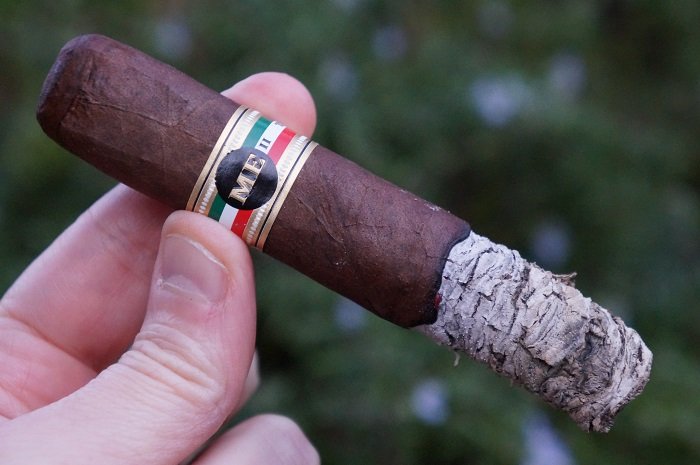 When I get into the second third of the cigar I find the pepper notes to be popping more than the first third, and it is paired with some dark rich earth and dry wood. There are strong tobacco notes present and wit that is some soft dark cocoa powder. The cigar is still smoking at a full level, and that goes for strength, body and flavors. 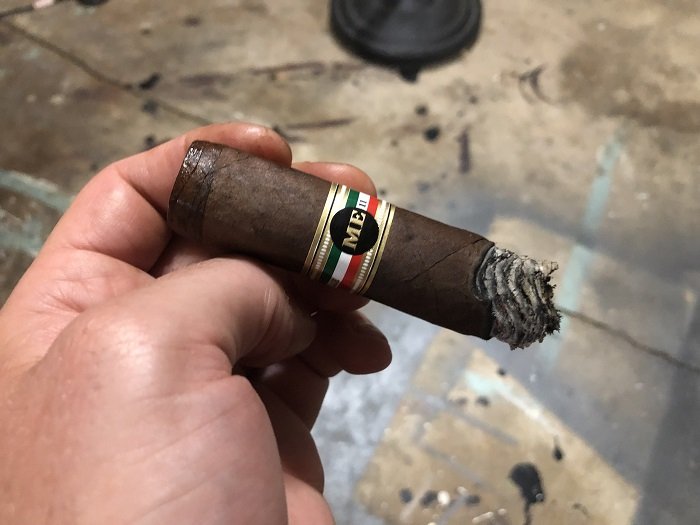 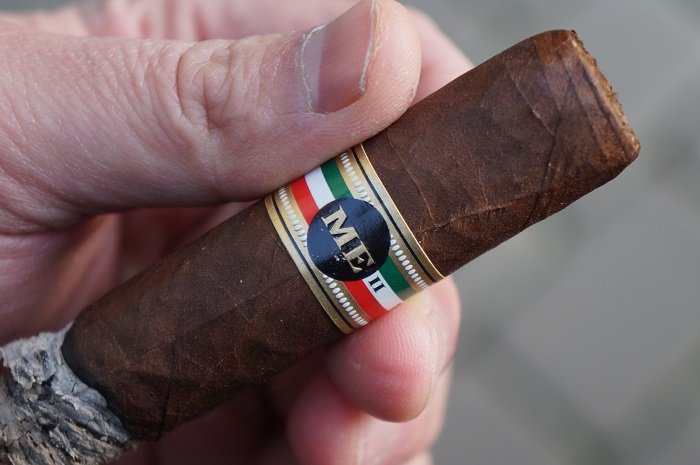 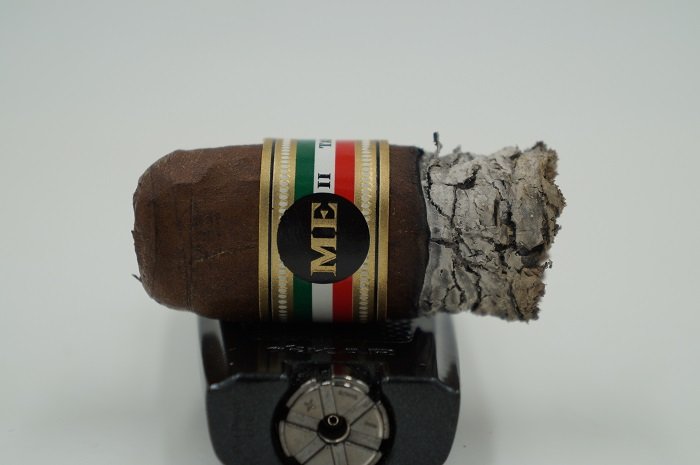 The final third shows a little bit of a decline in the flavor profile from the first and second third, and it shows some youth and harshness. I am picking up strong metallic notes and it is followed by this dry wood profile and strong spices. I am getting some peppery aspects with the cigar, but the main flavors present are that of metal, minerals and dry wood. It is full in strength and body, and the flavors are there as well. Overall, a disappointing finish to a nice start to a solid two thirds cigar. 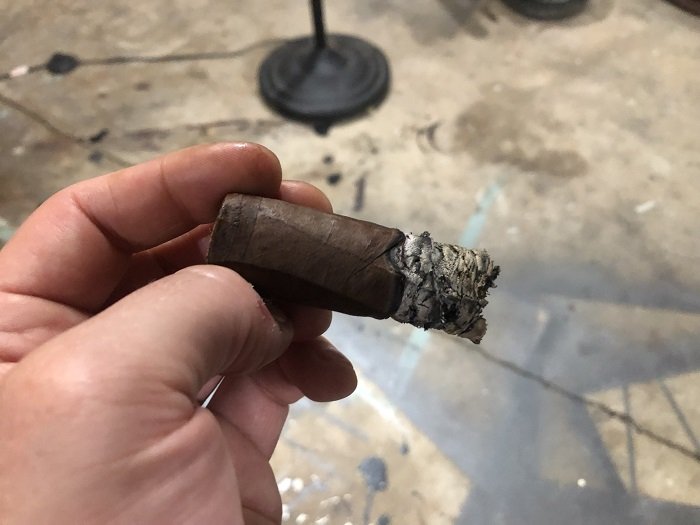 Nothing new to note within the final third. Still medium-full strength, medium body with baking spices, grippy tannins and cedar. A bit of a shame it’s not mimicking the first third goodness. 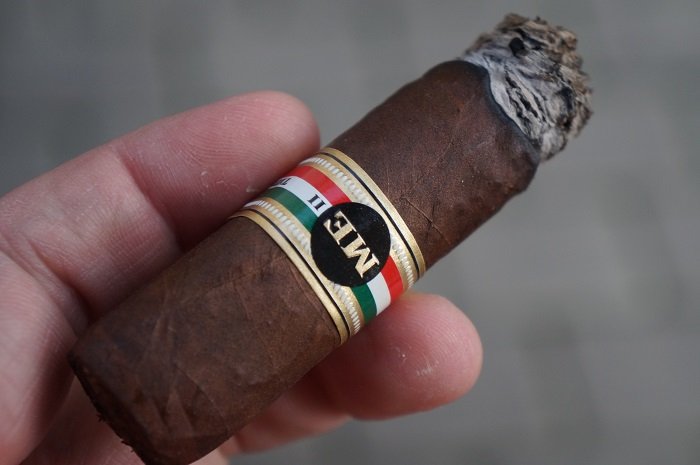 The burn was slightly wavy but never needed any attention. The ash held on in inch and a quarter increments, 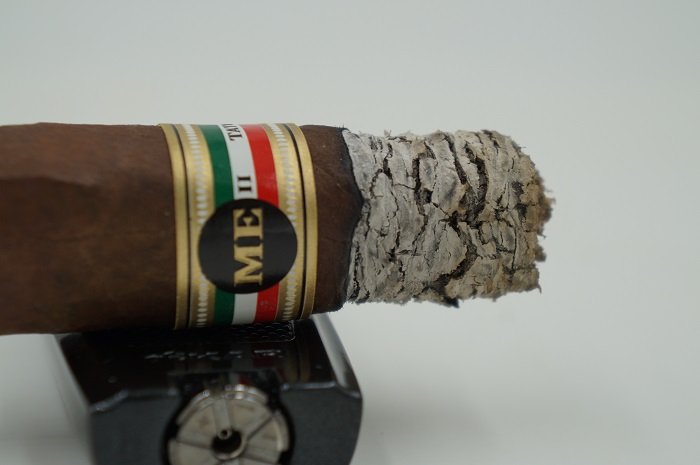 The burn on the cigar is solid from start to finish. The burn was never perfect, very minor wavy parts, but far from being a problem. With that, the burn line was tight the ash had a nice charcoal coloring. 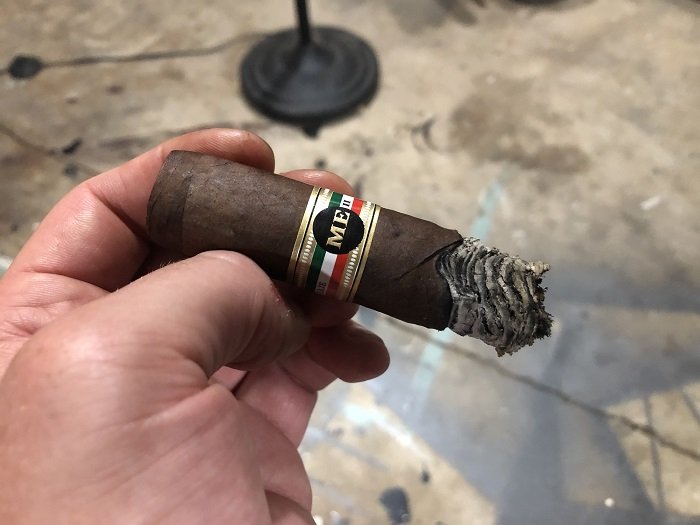 Burn was very good. The only mark downs were due to splitting ashes and an uneven burn at times. The most important part is the fact that I never had to use my lighter past the initial light. 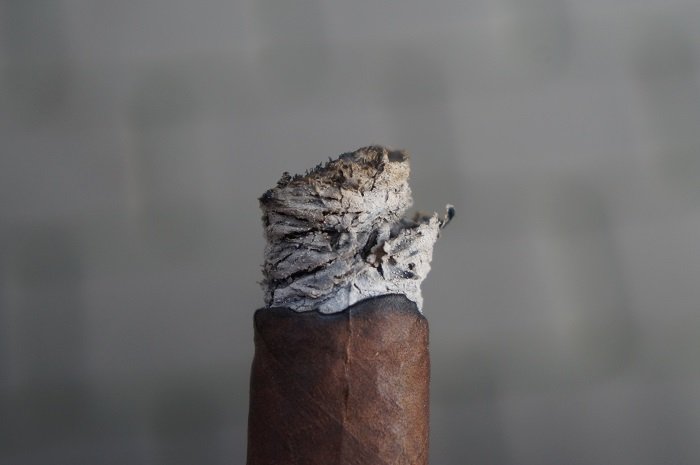 The cigar began with dark wood, cocoa powder and baking spice. Some mustiness joined in fairly quickly and the wood became more defined as oak. The cocoa dropped out before the second third. Some dry earth later joined in as the pepper left. The final third saw a vegetal note join in. Construction was quite good and strength was right around medium. The Tatuaje ME II Robusto began well, but once the cocoa left it became fairly average and maintained that level of enjoyment the rest of the way. The profile was pretty typical of the San Andres blends from the company and provides some dark flavors along with a nicely matching strength. While I probably won’t return to this cigar all that often, I would have no problem coming back to it when I’m in the mood for this style profile on occasion. If you’re a fan of Tatuaje and the San Andres blends, you’re likely to find something here that you enjoy.

Draw was amazing on this robusto extra from start to finish. Nice bit of resistance that helped in great smoke production and concentrated flavors.

When I look at how a cigar smokes and what it delivers, I obviously take into account each third, but the final third is very critical for the cigar. You can have a slow start and finish with an amazing smoking experience, but to have a poor finish, well that is what you are going to remember the most. You’re not going to remember how solid the first third was. This seems to be a trend with a lot of new releases and its concerning. People make the joke that Cigar Aficionado only smokes the first third, and then when you see the cigars being released and how they smoke well in the first and then poor afterwards, you begin to think the myth may be true. The ME II is a cigar that has a solid beginning, solid second third and a finish that is simply subpar. It is a shame, because the cigar had a nice start and the potential to be enjoyable, but it failed to deliver. It was a nice full body/strength cigar that went downhill. If that first third carried on throughout, it would have been a great new release from Tatuaje.

The draw was slightly snug the entire smoking time. Not a major deal but a notable one.

The Tatuaje ME II Robusto is cigar showing a good first third that sadly tapered to mediocrity. The first third was a good representation of what Pete Johnson does. That is, use heavier tobacco but doing a good job of showing balance in earth, spice and soft notes. But past that mark, the balance was thrown off losing out on the soft notes, creating a profile that is too earth and spice forward. Not nearly as good as the original Mexican Experiment, but a decent showing.