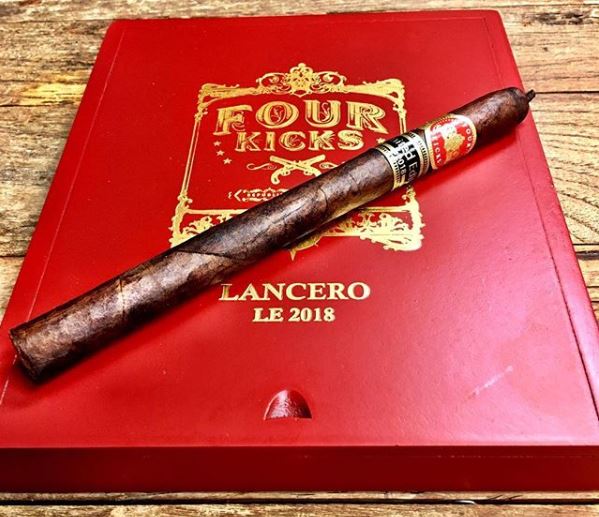 The lancero was a vitola that was first rolled at the El Laguito factory in Havana, Cuba, in the 1960’s with the creation of the Cohiba brand, and soon thereafter, became known as the El Laguito No. 1 throughout cigar factories in Cuba.

To this day, the lancero retains a reputation among cigar enthusiasts as one of the most elegant vitolas, and one that effectively highlights the flavor of the wrapper,as there is less filler to counterbalance the flavor profile. In the spirit of this storied vitola, Crowned Heads is proud to present the Four Kicks Maduro Lancero LE 2018. The Four Kicks Maduro Lancero had a ‘soft opening,’ of sorts, at the recent 50th Annual TAA Trade Show (April 29-May 3) held at Casa de Campo, in La Romana, Dominican Republic. Attendees of the TAA 2018 show had the first opportunity to view and order this Crowned Heads Limited Edition release. The Four Kicks Maduro Lancero LE 2018 will begin shipping this week to those select TAA accounts who placed an order during the trade show. The balance of the production will be made available to all accounts on a first-come-first-serve basis during the upcoming IPCPR86th Annual Convention and International Trade Show in Las Vegas, July 13-17. “The Four Kicks Maduro Lancero follows in previous Crowned Heads lancero releases such as Headley Grange Drumstick and J.D. Howard Single Action,” commented Crowned Heads co-founder, Jon Huber. “It was difficult keeping this one quiet since it’s debut at the TAA show; however, we wanted our TAA supporters to enjoy some time with this releasebefore we made it available worldwide.”

Four Kicks Maduro Lancero LE 2018 is a one-time release, with a total production of 1,500 ten­ count boxes (15,000 total cigars), and will have an MSRP of $9.95 per cigar. The cigars are manufactured at Tabacalera La Alianza, S.A., in Santiago, Dominican Republic, under the supervision of Ernesto Perez-Carrillo, widely regarded as one of the premium cigar industry’s true icons.