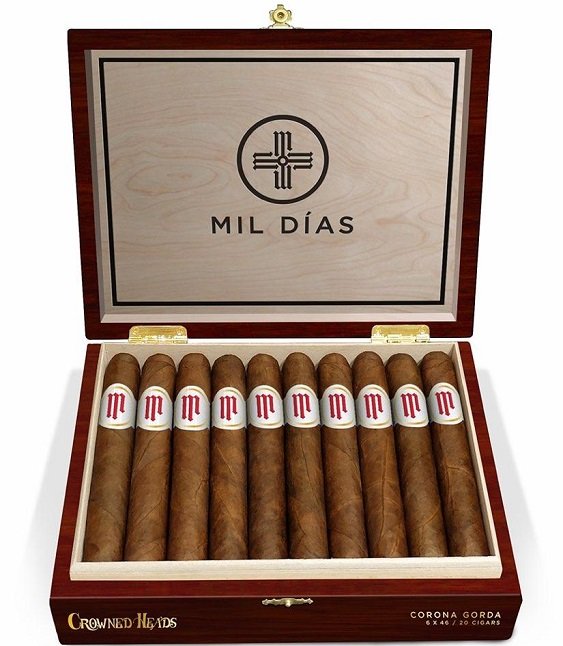 Crowned Heads is proud to announce “Mil Días,” an ultra-premium cigar offering developed in partnership with Tabacalera Pichardo, the factory behind the highly successful “Juârez” brand launched in the latter part of 2018.

Mil Días translates to ‘one-thousand days,’ and is a reference to the three-year window of time it required to bring the project from intention to fruition, and ultimately, to completion. The project began in the Summer of 2017 when Don Eradio Pichardo and Luciano Meirelles presented blend samples to Jon Huber of Crowned Heads at the IPCPR Trade Show. “I was very impressed with those initial samples and I felt the blend had tremendous potential,” commented Crowned Heads co-owner/founder, Jon Huber. “Little did I know that those samples would take us on a nearly three-year journey of blend exploration and experimentation.”

“To create a blend and innovate you need to take risks beyond conventional thinking,” added Luciano Meirelles, Tabacalera Pichardo and Ace Prime Group co-owner. “Mil Dfas represents our relationship’s journey, and it also highlights the fruitfulness of our recently announced strategic alliance.” Don Eradio Pichardo, co-owner of Tabacalera Pichardo and Ace Prime Group commented, “When Luciano had me try his first blend of Mil Días I knew right away we had something magical, and I’m excited to see Crowned Heads release this fantastic cigar.”

Mil Días is a four-vitola collection comprised of a Nicaraguan binder, filler tobaccos from Nicaragua, Peru, and Costa Rica, finished with an Ecuadorian Habano wrapper. The brand language is a collision of modern luxury and iconic tradition, bringing modernity to the classic cigar brand expression. The flavor profile may be described as medium-plus in body, and full in flavor, exhibiting exquisite balance and complexity. The end result is a profile where heritage meets the future, blurring the lines between history and modern, Cuba and Central America.

Manufactured at Tabacalera Pichardo in Esteli, Nicaragua, under the supervision of Don Eradio Pichardo, Mil Días will begin shipping August 2020. The suggested retail price range will be $9.25 to $11.50 per cigar.