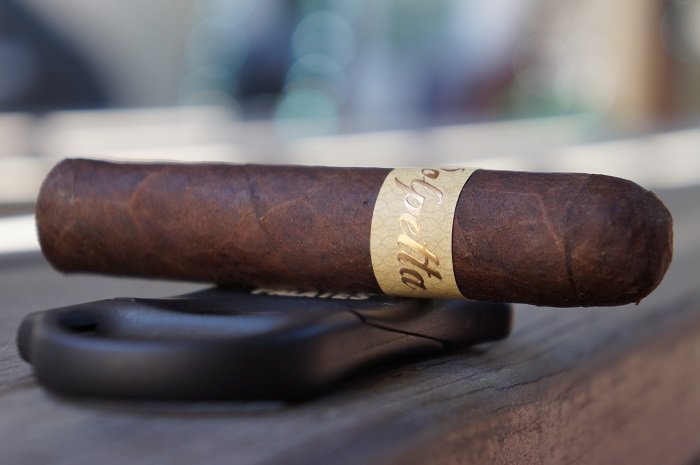 The wrapper on the Dunbarton Tobacco & Trust Polpetta is dark brown and has a couple of raised veins that carry a lighter color around them. The seams are easily visible as they are slightly raised and the head is finished off with a well applied double cap. The band is off white and has some curly designs in the background. The line name is in gold and on the back is a burgundy rectangle with a fork holding a meatball in gold. The aroma from the wrapper is a mix of stewed fruit and wood while the foot just brings some woodiness. The pre-light draw brings a light, airy cedar. 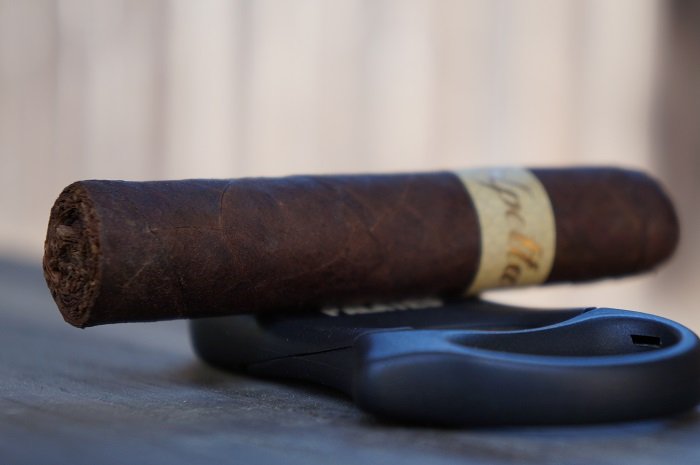 The Dunbarton Tobacco & Trust Polpetta has a wrapper that is rough and toothy with a faded brown coloring. There are medium sized veins present as well and the aroma on the foot and wrapper is that of rich spices, barnyard and tobacco. It is not an attractive cigar and has the appearance of what it is, a bundle cigar. The coloring is inconsistent throughout. 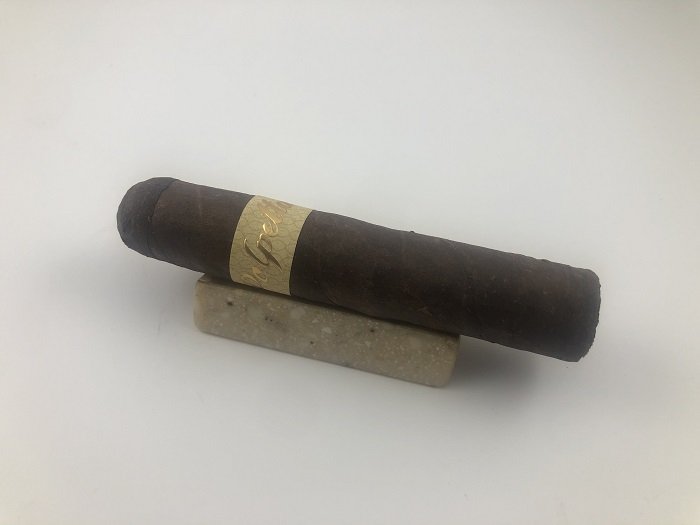 The Dunbarton Tobacco & Trust Polpetta has a dark chocolate wrapper, very smooth in appearance. Nosing the cigar, I was able to pick up aromas of cedar, spices, mild leather and hints of sweetness, almost like a molasses. From the foot, there was hay, cedar and some baking spices. 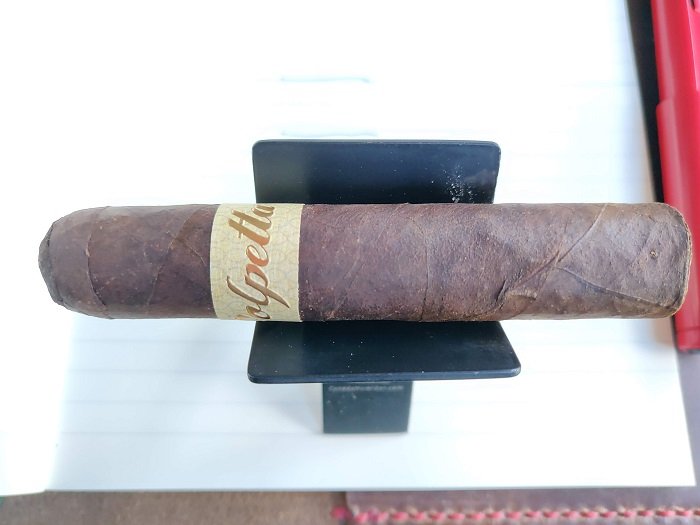 The Dunbarton Tobacco & Trust Polpetta sports a uniformed maduro wrapper shade. Veins are well pressed, seams tight, bunch and roll even and head nicely finished off with a deep wrap. Aromas from the wrapper give oak and faint star anise. Aromas from the foot tell a blast of red pepper spice and roasted nuts. Cold draw tells hay and dehydrated persimmons. 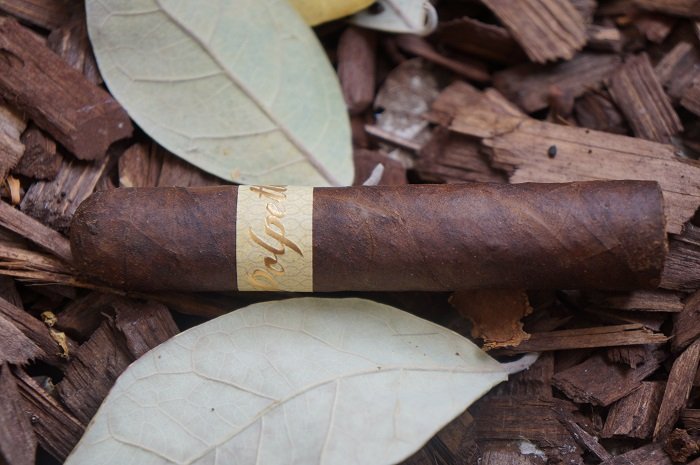 The cigar begins with lightly charred wood, black pepper and light cocoa powder. At a quarter inch in, the cocoa powder is replaced by mustiness. The retrohale starts with a pepper zing but finishes with musty wood. At three quarters of an inch in, the char drops out and the draw begins with the wood and the mustiness even, but a huge wave of black pepper rushes in to overtake it and has a long finish. As the third comes to a close, the black pepper mellows some. The strength in this third was slightly above medium. 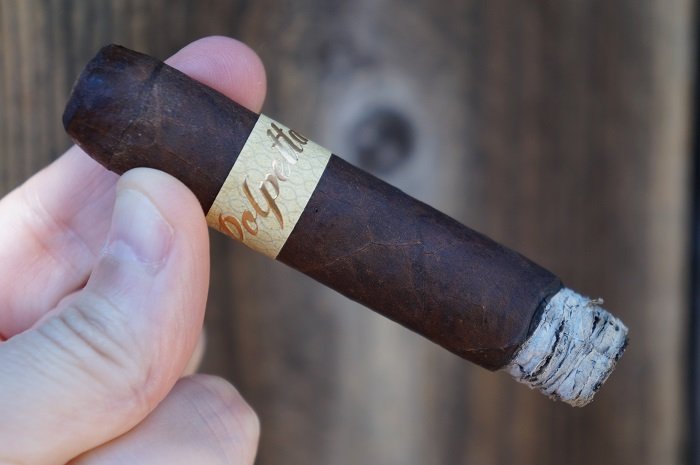 The first third begins by delivering a flavor of rich earth, cocoa and touches of spice. I am getting some cinnamon and hints of red pepper, but it is simple and truly lacking. There is a mineral and herbal quality on the finish, and the cigar is smoking at a medium level for flavors, body and strength. 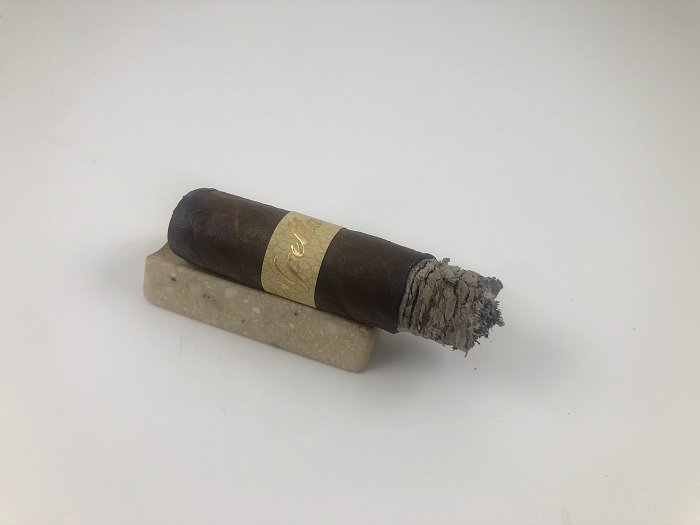 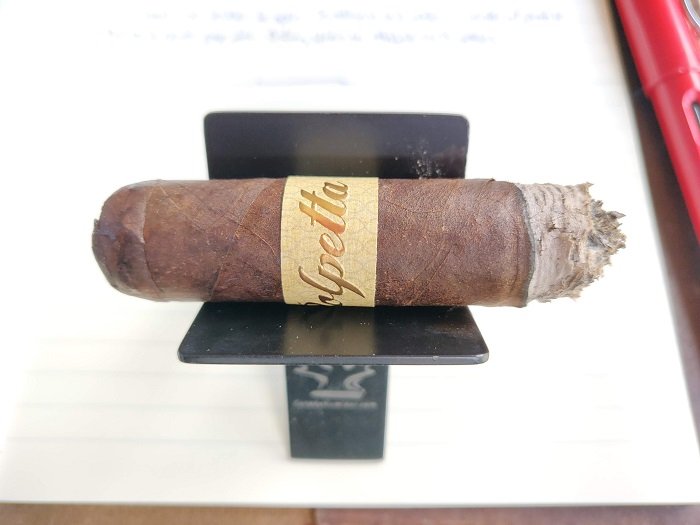 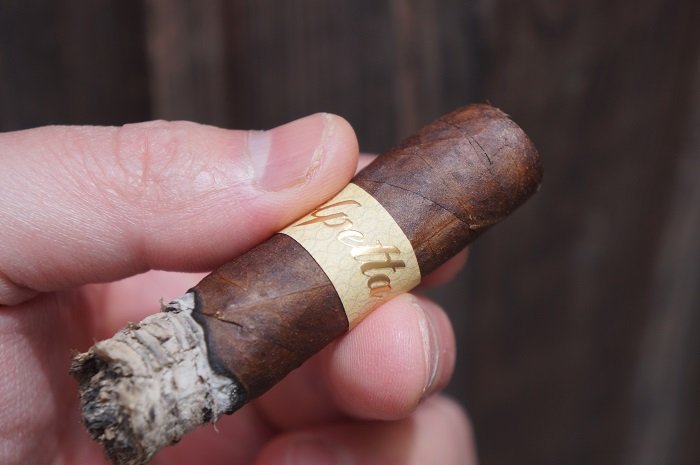 As the second third begins, some char returns to the profile and the black pepper has continued to decrease. At a quarter inch in, the profile is charred and musty wood with a very light black pepper in the background. The profile is also a bit dry now. At a half inch in, some dry earth joins the profile. The retrohale is musty wood and light dry earth. At three quarters of an inch in, the char drops from the profile. As the third comes to a close, some char returns. The strength in this third remained at slightly above medium. 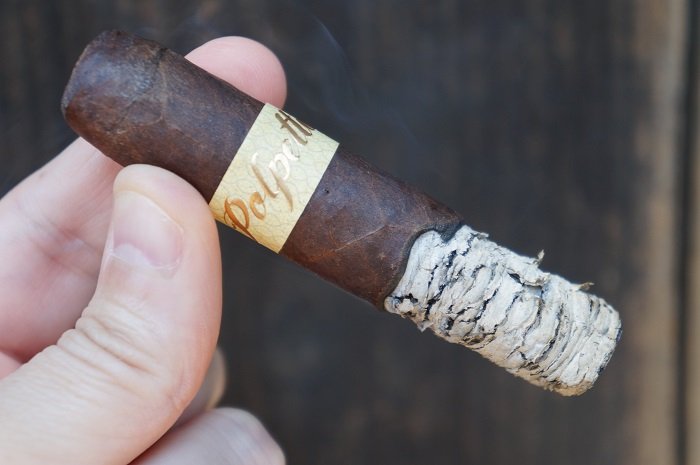 When I get into the second third of the cigar, I don’t see much change. The flavor profile being delivered is right in line with where it was in the first. I am picking up notes of earth, cocoa, minerals, cinnamon and red pepper. Like before, the cigar is medium in body, strength and flavors.

The second third has a couple new things going on. First, the strength ramps again to a full tilt max. Second, the flavors are more spice driven (dry red pepper) with cocoa and cedar being on the back end. Body is still full. 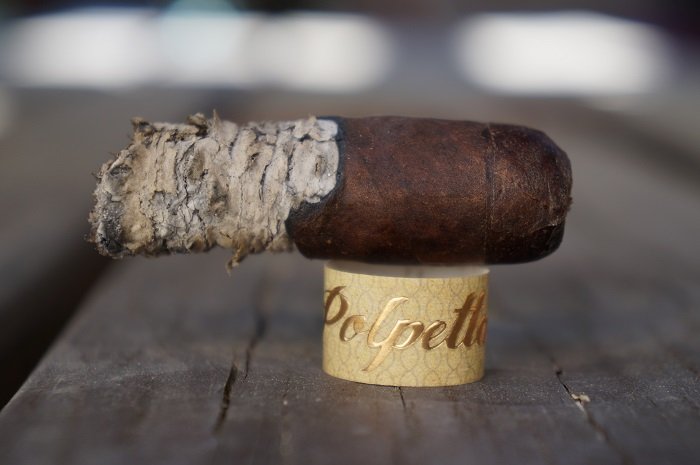 The final third is identical to that of the second third. I am picking up flavors of cocoa, cinnamon, red pepper and rich earth. It is still medium in body and strength, and the flavors are right there as well. 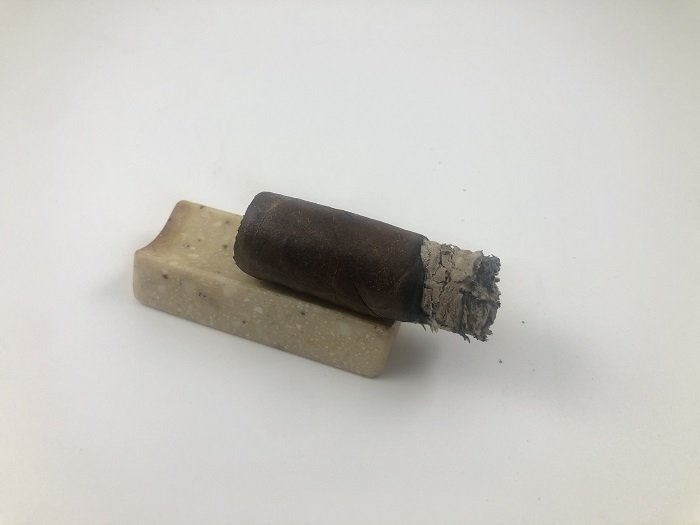 Earth carries the flavor profile into the last third. Post draw pepper lingers on my lips as the last third settles in. By the mid point, earth has taken over the retrohale. 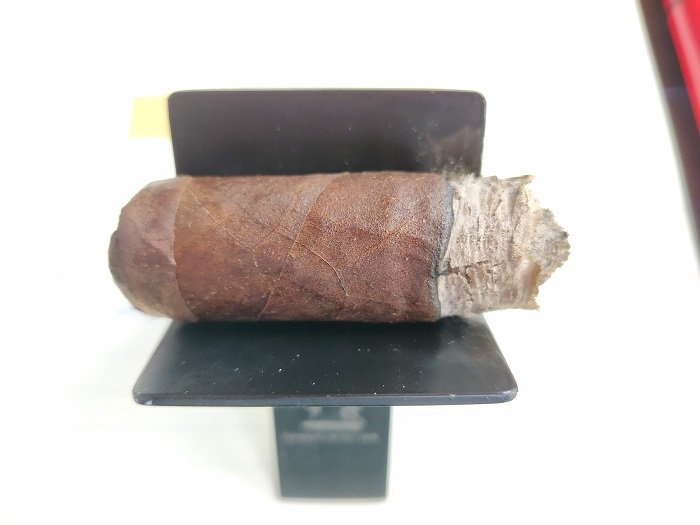 Nothing new to note within the final third. Still full body and strength with dry red pepper spice, cocoa and cedar on the palate for mouth draws, retro and finish. 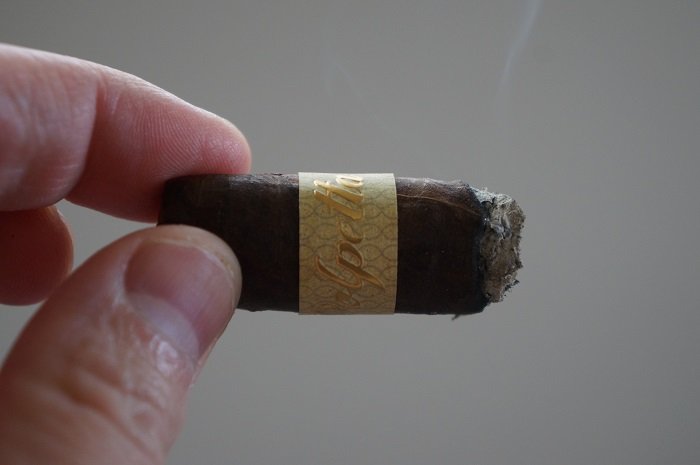 The burn was slightly wavy, but never needed any attention. The ash held on in inch and a half increments. 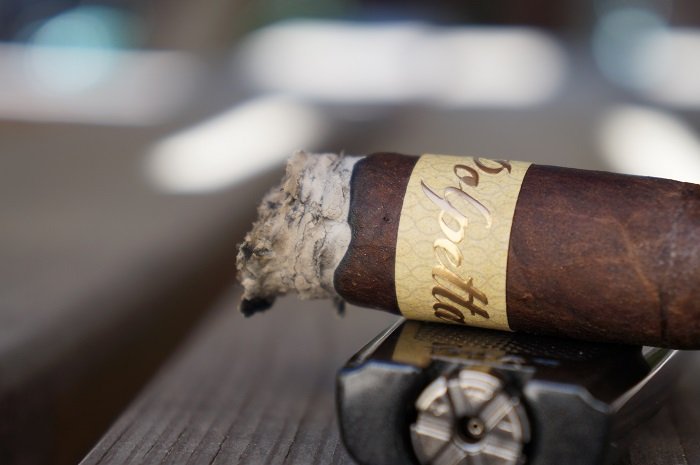 The burn was fantastic from beginning to end. 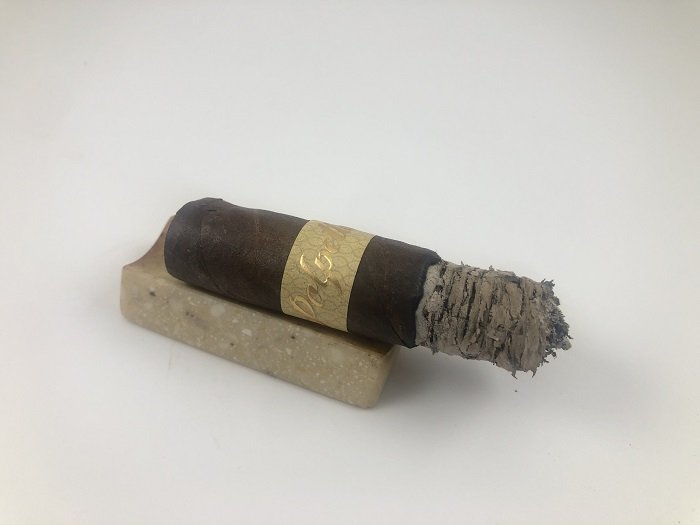 Very straight burn throughout. The ash drops in clean half inch increments. 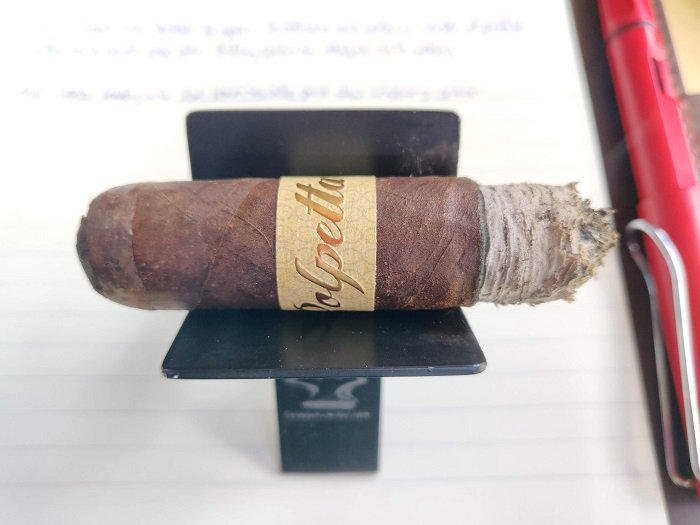 The burn was slightly wavy with some tapered ashes. Small gripes to basically say it wasn’t picture perfect. 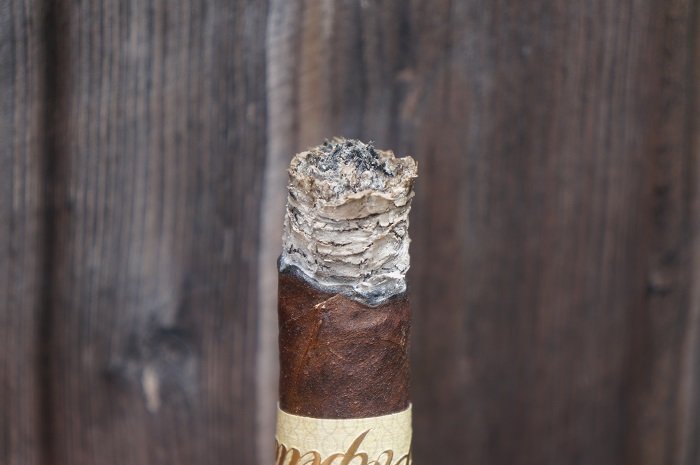 The cigar began with lightly charred wood, black pepper and light cocoa powder. The cocoa powder is quickly replaced by mustiness and the char drops out a bit later. The second third sees the char pop in and out and some dry earth joins in. The final third maintains the profile of charred and musty wood and dry earth. Construction was very good and strength was slightly above medium the whole way. The Dunbarton Tobacco & Trust Polpetta had an average enjoyment level throughout that started with quite a bit of pepper and settled in as a drying profile of charred wood, mustiness and dry earth. Being an event exclusive cigar, I was hoping for something a bit more special. If you’re a fan of the brand, especially some of the more recent releases, you’ll probably find something here you enjoy, but for me, it’s likely not something I’d be interested in tracking down more of.

The draw was simply amazing.

The Dunbarton Tobacco & Trust Polpetta is far from being a poor cigar, but it does fall into this recent trend of event-only cigars that are not worth the price of admission. There was a time when event-only cigars were special and of high quality, but that has gone out the window. This is a one dimensional cigar. There is no complexity or transitioning and in the end it is saved by the draw and burn. I don’t know what you have to buy to get these, or if they simply hand them out at the event, but if I were to buy a box of a particular line I would rather get a couple sticks from that line than a bundle of these. I doubt that’s an option though. With that, I would not want to hand these out as a representation of my brand. “Hey, thanks for coming. Smoke this! It’s scrap tobacco. I’m not saying don’t go to a Saka event or purchase a box from one of his events, but don’t go crazy on your purchases just to get your hand on some Polpettas. It’s a short, one dimensional cigar that could serve a purpose, but not as an event-only cigar.

The draw had some significant resistance to it, roughly 3-1/2 to 4 notches. Despite the snug draw, the smoke production was quite voluminous.

The Dunbarton Tobacco & Trust Polpetta was a nice vitola departure from many of the larger cigars we’ve been reviewing lately. The first third had the most complexity with engaging components of sweetness, cedar, baking spices and leather. That complexity broke down moving into the second and last third and served up a fairly average experience for my palate. Total smoking time was a relaxed 1 hour and 12 minutes.

The draw was slightly snug. But overall, a non-issue.

A wolf in sheep’s clothing. The Dunbarton Tobacco & Trust Polpetta, a fairly unassuming 4×48, but once you get to smoking it, the heavy handed strength, chewy and viscous body lets you quickly know it means business. But it’s not just full body and strength without good flavors. The overall core notes of cocoa, dry red pepper spice, cedar and nuts was a good compliment to the fullness. I think it’s worth going to the events to seek out a few of these.