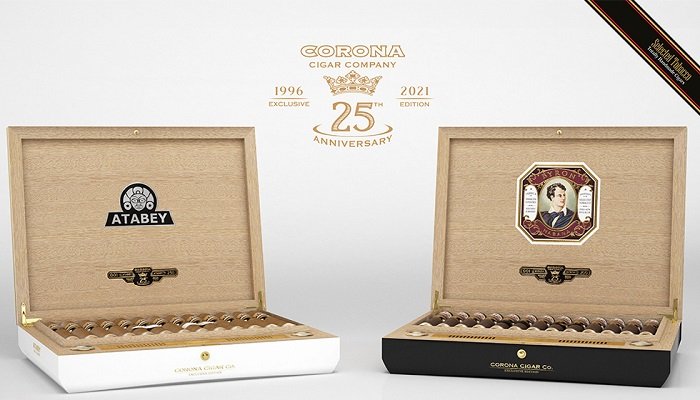 Orlando, FL – A celebration of 25 years for Corona Cigar Co. is captured in two elegant offerings from Nelson Alfonso of Selected Tobacco and United Cigars. As pioneering retailers, Jeff & Tanya Borysiewicz have helped mold our beloved cigar industry. In recognition of these 25 years, Nelson created two Limited Edition humidors each featuring 25 unique cigars. The Atabey humidor will be accompanied by the Misticos which has more than 7 years of post-roll age from the 2013 vintage and has long been Jeff’s favorite vitola. The Byron humidor will feature the Byron Venecianos (Torpedo) with a rich, dark Ecuadorian wrapper that will be exclusive to Corona Cigar Co. Both cigars will feature a personalized 25th Anniversary Corona Cigar Co. band.

“We celebrate moments in our lives and this one is very special to the Corona family,” said Jeff. “We have admired all of Nelsons work in the industry and are honored to have him be a part of our 25th Anniversary.”

Oliver Nivaud of United Cigars stated, “Nelson’s packaging design influence has touched the industry on a global scale and these 25th Anniversary humidors for Corona Cigars are for the history books.”

Landing at Corona Cigar Co. by the end of 2020, preorders are being received now. Preorders are accepted at www.coronacigar.com or by calling 888-70-CIGAR.