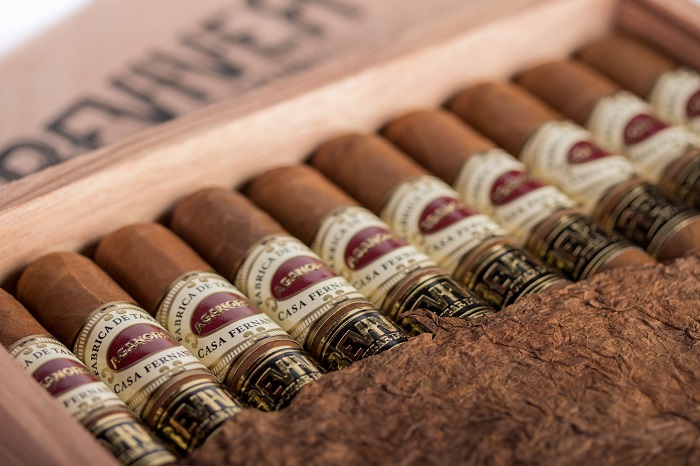 It’s no secret that the Fernández family has been producing some of the hottest cigar blends in recent memory, including multiple cigars in Cigar Dojo’s Top 10 All-Time Rankings, as well as the Dojo’s Cigar of the Year for 2016. The common thread with each of these cigars is their origin, beginning with the many farms of Aganorsa, and being crafted at the lauded TABSA factory in Estelí.

For ReviveR, Max Fernández (part-owner of Aganorsa Leaf) has hand-selected a personal blend of Aganorsa leaves from his family’s farms, showing an emphasis on tobaccos from a select region of Jalapa. The blend begins with a Corojo ’99 wrapper from Jalapa and is amplified by Jalapa-based Criollo ’98 and Corojo ’99 leaves in the filler. For balance, a hearty Criollo ’98 leaf from Estelí—Nicaragua’s most fiery/intense growing region—has been incorporated into the binder. With a focus on Nicaragua’s Jalapa region, the blend takes on a naturally sweet profile, coating the tongue with a syrup-like sensation.

“Aganorsa Leaf is quickly becoming known as some of the highest quality tobacco in the world and key to some of our favorite cigars. The Dojo has wanted to create a 100% Aganorsa blend for some time, as we wanted to show just how amazing this tobacco really is. ReviveR is the culmination of this effort and we couldn’t be more excited to share it,”commented Eric Guttormson, owner of Cigar Dojo.

For years, the Fernández family’s Miami-based distribution arm was known as “Casa Fernandez,” producing popular brands such as JFR, Casa Fernandez, and Guardian of the Farm. The company has recently undergone a complete overhaul, changing its name to Aganorsa Leaf and modernizing the company’s complete look and feel. ReviveR is the physical embodiment of Aganorsa’s metamorphosis—greeting cigar enthusiasts with a fresh take on one of the world’s most vaunted tobacco producers.

Terence Reilly, Senior Vice President of Sales and Marketing at Aganorsa Leaf, added, “The ReviveR symbolizes the direction of Aganorsa Leaf. We have been a sleeping giant in this in industry and now its time we wake up. Our time is now!”

ReviveR is a limited edition collaboration, with 300 boxes of 10 cigars being sold exclusively through online retailer Atlantic Cigar Company. While pricing has been set at $99.95 per box, members of the Cigar Dojo app will be offered special release pricing of $89.99 during the first weekend of availability. If supplies remain after this period, ReviveR will return to its original price point. For ReviveR, the cigars have been packaged in one of the finest presentations to date from a Cigar Dojo project, showing the cigar’s palindrome-inspired logo in classic, raw-wood boxes. As a finishing touch, each box arrives with a genuine Aganorsa leaf, resting just beneath the box’s sliding lid.

Medium-bodied with a focus on natural, syrupy sweetness. The cigars begin with light and aromatic cabinet spices, opening up to include notes of sweet cedar, honeysuckle, allspice, butter, and rock candy.